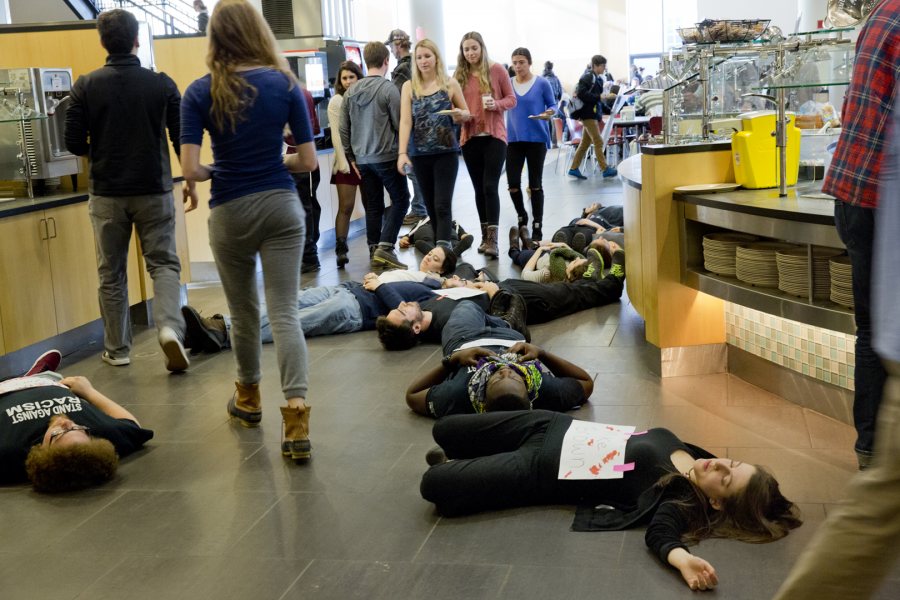 At noon on Dec. 2, more than 50 Bates students put their outrage about the outcome of the Michael Brown case in a place where it could not be overlooked: Commons at the height of lunch hour.

Wearing signs decrying the St. Louis County grand jury’s failure to indict the police officer who killed Brown, along with other infamous instances of police-on-black violence, the protesters lay silent and motionless on the hard Commons floor as their fellow students stepped around and over them in pursuit of a hot meal.

Some 40 minutes after the die-in began, the students rose up, marched for the exit and reached for the ceiling, chanting the slogan — now familiar from two months of national protests about the Ferguson shooting — “Hands up! Don’t shoot!”

Many diners were supportive, but perhaps not all. “If people got uncomfortable or felt they were inconvenienced, all the better,” said demonstration organizer Annakay Wright ’17 of Brooklyn, N.Y.

Wright’s goal in interrupting the daily flow of life at Bates, she said, was “to interest people and to get them to think” about Brown’s shooting by Ferguson policeman Darren Wilson; the jury’s handling of the case — and what those episodes represent about police brutality and racial profiling in the United States.

At least one diner thought the protest was an effective means of raising consciousness. “It’s a great way for students to get involved with happened in Ferguson,” said Nicole Kanu ’15 of Little Rock, Arkansas.

Wright led a debriefing on the second floor of Commons following the public demonstration. Back on the floor, but sitting up this time, the students shared what they thought and perceived as they lay in the path of the lunch crowd.

The experience led one student to put himself in the place of protesters that encounter a violent response.

Another saw the protest as a perfect symbol of society’s familiar habit of greeting injustice with a blind eye. “These bodies have been stepped over, they have been forgotten,” he said. “This is what people have been doing for the past years and months now.”

“People wouldn’t even break their conversations as they were stepping over me,” a woman said.

Another woman wondered about the relative impacts of making eye contact with the diners vs. keeping her eyes closed. And a third saw the experience as a test of her conviction: She wondered what she would have done if all the other protesters had given up and left.