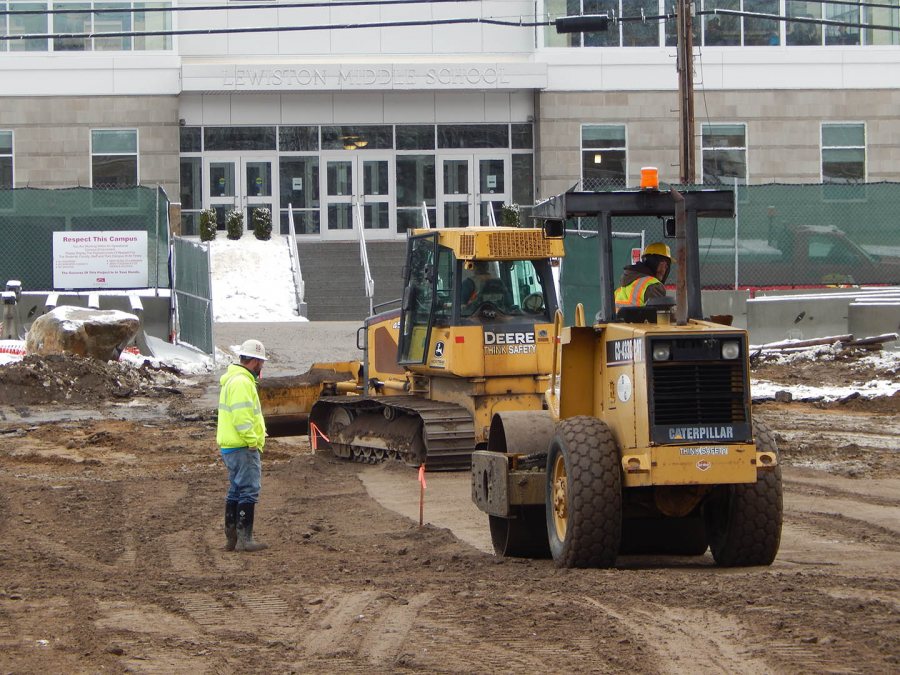 With the entrance to Lewiston Middle School in the background, workers for Gendron & Gendron prepare a parking area on the 65 Campus Ave. site. (Doug Hubley/Bates College)

Dirt is just dirt when the dog tracks it onto the white shag carpet. 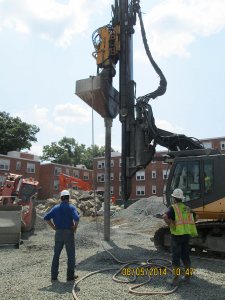 Helical Drilling at work. Many thanks to Janet Haines ’75, director of real estate at the Brookline (Mass.) Housing Authority, for this photo of Helical implanting geopiers at a project last August. “Helical was great and the vibration was minimal,” says Janet.

Some kinds of dirt will do just fine when you want to build something on top of it — but other kinds, not so much. Those other kinds bring us to an especially interesting chapter in the story of the two student residences that Bates is building for its Campus Life Project. And it’s a chapter beginning early in the new year.

One residence, 65 Campus Ave., will occupy the corner of Campus and Central avenues, facing Muskie Archives to the north and Lewiston Middle School to the east. The soil along Central contains miscellaneous fill and pockets of slippery marine clay. It’s not suitable to support a building.

In the old days, one solution to this problem was so-called deep excavation: digging out all the unsuitable soil and replacing it. That takes a lot of money and time, and leaves you with a mountain of unwanted dirt to dispose of.

Nowadays, a good remedy is rammed aggregate piers, known by the trade name Geopiers. These structures are created by injecting a mixture of crushed rock and grout into the soil, and pounding it down at regular intervals so that the material bulges out in fat rings that grip the surrounding earth.

The aggregate and grout solidify into a tough vertical piling, resembling the Michelin Man’s leg or a stack of doughnuts, that stabilizes the surrounding soil. And 258 of them, between 10 and 29 feet deep, will support the basement of 65 Campus Ave.. 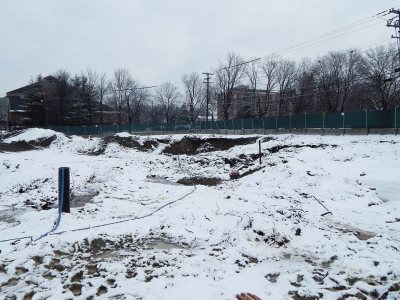 Starting early in 2015, the soil in this section of the 65 Campus Ave. site will be made suitable for building with the implanting of 250-plus “geopiers.” Imagine the Michelin Man’s leg, writ large. (Doug Hubley/Bates College)

(In addition to student lodgings, 65 Campus Ave. will house the College Store and Office Services on the ground floor. The basement will underlie only the section of the L-shaped building containing those operations, while the section paralleling Campus Avenue will rest on a concrete slab atop conventional concrete footers.)

There are different ways to plant a Geopier. At Bates, subcontractor Helical Drilling of Braintree, Mass., will vibrate a pipe called a mandrel down into the earth and then inject and tamp down the aggregate-grout mixture while the pipe is withdrawn.

The vibration of the mandrel, says project manager Chris Streifel, actually causes the soil to deform and consolidate, allowing the aggregate to balloon outward as it is rammed.

Naturally, some commotion will accompany the project, but nothing serious is anticipated. He expects the vibrations emanating from the site to be on the scale of what you feel from road paving.

The equipment for the Geopier work, including a boom some 60 feet tall that will handle the mandrel, will likely appear on the site after Jan. 1. The work itself is scheduled for Jan. 5–16. 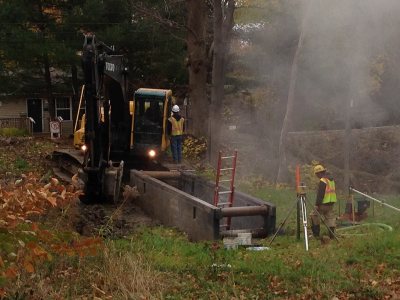 With a power shovel and a trench box, workers make a storm drain connection on Bardwell Street on Nov. 6, 2014. (Doug Hubley/Bates College)

The need for the Geopier underpinnings was unearthed, so to speak, after the demolition of houses along Central Avenue. “They were able to do more soil testing and found the soils unsuitable to be built on,” says Streifel. “It was out of an abundance of caution, but it turned out to be a well-founded exercise.”

While Helical Drilling is busy implanting Geopiers, the site preparation work that has been underway for weeks on the 65 Campus Ave. site will move across Franklin Street to the 55 Campus Ave. parcel. That entails grubbing out the foundations and utility connections of the houses that were torn down in the late summer, moving soil around and grading the site.

In construction, a lot of the pivotal (and therefore interesting) stuff seems to happen underground. The Geopiers are one example. Another is the big storm drain that was completed in early December. The new drain, 24 inches in diameter at its largest, was extended nearly to Central Avenue from its municipal connection on Nichols Street, near the Bates Communications Office compound.

This mighty conduit will carry to the Androscoggin River storm runoff that has been passively cleaned by rain gardens, permeable paving and other clever landscaping that will be built into Campus Avenue Project site. 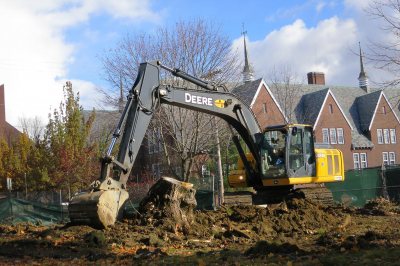 Can we talk? It gets lonesome here in the penthouse suite at the Bates Communications Office, so Campus Construction Update welcomes your questions and comments about current, past and future construction at Bates. Write to dhubley@bates.edu (please put “Campus Construction” or “How do you rate a penthouse?” in the subject line ) or use the 21st-century commenting system below.