Did you know that 60 percent of Bates alums marry fellow alums? If you do know this “fact,” it’s time to forget it.

Untrue though it is, the 60 percent fact still circulates among Batesies and gets passed on from generation to generation.

Originally published in the Summer 2010 issue of Bates Magazine, this story’s statistics were updated in 2015.

On campus, “60 percent” launches some of the first conversations among incoming students. It’s an icebreaker for first-year women crowded on a bunk in Smith. Or, during a pre-orientation AESOP trip, the upperclass trip leader shares the fact with her new charges.

Later on, the statistic might be used to tease a friend after his or her embarrassing encounter, romantic or otherwise, with another Batesie: “Hey, it’s 60 percent — it could happen!”

Or, much later, the stat might come up in an awkward conversation, like when someone asks the senior couple who’s been dating since freshman year if they’re going to become “statistics.” 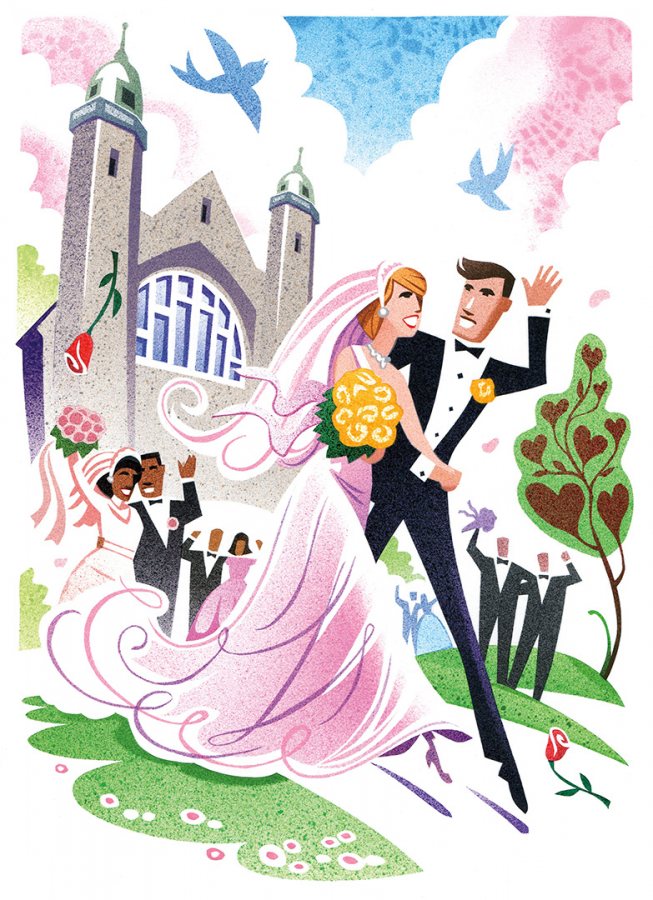 And the statistic is perpetuated via many pathways. Besides word of mouth, it’s published in at least one college guide. And the stat has history: A 1978 grad claimed to have heard then-President Thomas Hedley Reynolds announce at Convocation, “Look to your left, look to your right. Sixty percent of you will marry other Bates grads.”

Sixty percent grabs our attention, plays to our emotions and tests our imaginations. But can it really be true? Will over half of us really marry one another?

The accurate figure, as of 2010, is approximately 12.5 percent. Of the 23,356 living alums in the Bates database, 2,914 have a spouse or partner who is also a Bates alum. (If you include alums whose Bates spouse or partner is deceased, the number creeps up a few points.)

Finding this real answer, and exploring the connection between myth and reality, was part of my final project in the seminar “Marriage in America,” taught by Rebecca Herzig, the Christian A. Johnson Professor of Interdisciplinary Studies.

Besides finding the real Bates marriage statistic, I interviewed various Bates people, and when they heard the real marriage percentage, they expressed genuine shock.

One not-yet-hitched senior female, figuring the pool of spouses was only the size of Bates, responded in relief. “Thank God, I still have time! I won’t die alone with my cat!” 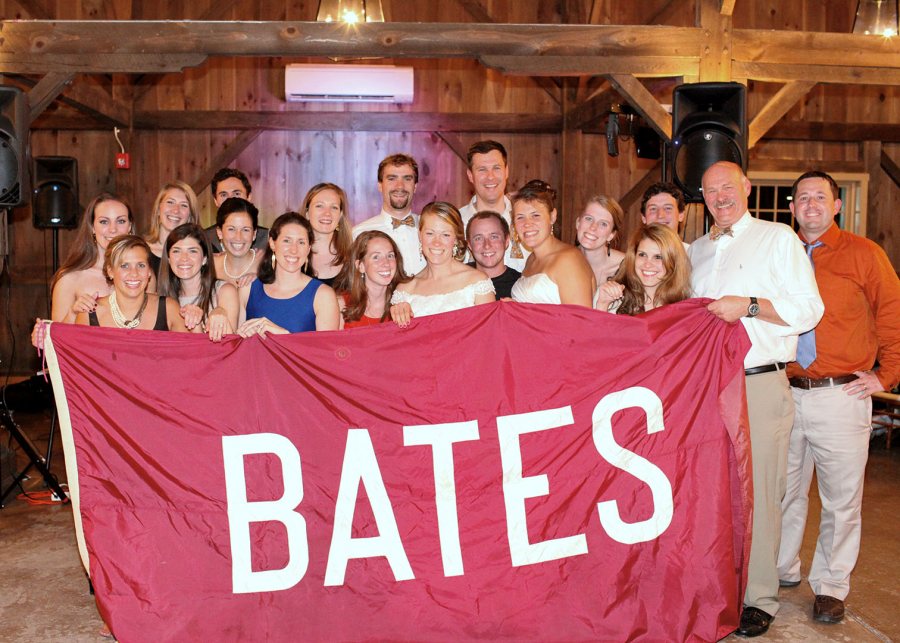 The concept of alumni marriage is a bit less heteronormative these days: the Bates group photo from the wedding of Sarah Wilson ’06 and Kristen Fries ’07 in October 2012.

Others went to great lengths trying to convince me that I was wrong.

They insisted they heard the figure recited during an official campus tour, while others named a long list of married Bates couples. One girl even tried to drag me to her dorm to show me the statistic printed in a college guidebook.

In fact, I found that other colleges of our ilk also tend to have a mythical marriage statistic. At Colby, the myth is 50 percent and the reality 11 percent, while at Carleton it’s 60 and 15 percent, respectively. At Middlebury, the numbers are 60 and 13 percent.

The politics of marriage has influenced the very well-being of the College.

I was also interested in unraveling the meaning attached to both the 13 percent and 60 percent.

The politics of marriage has influenced the very well-being of the college.

Anecdotally, I found that people who are highly active as Bates volunteers are often married to other Batesies. And when a Bates alum marries a non-Bates alum, a curious historical phenomenon has often come into play: The husband’s college tends to get a greater share of the couple’s philanthropy. (This can also be true at other colleges elsewhere.) 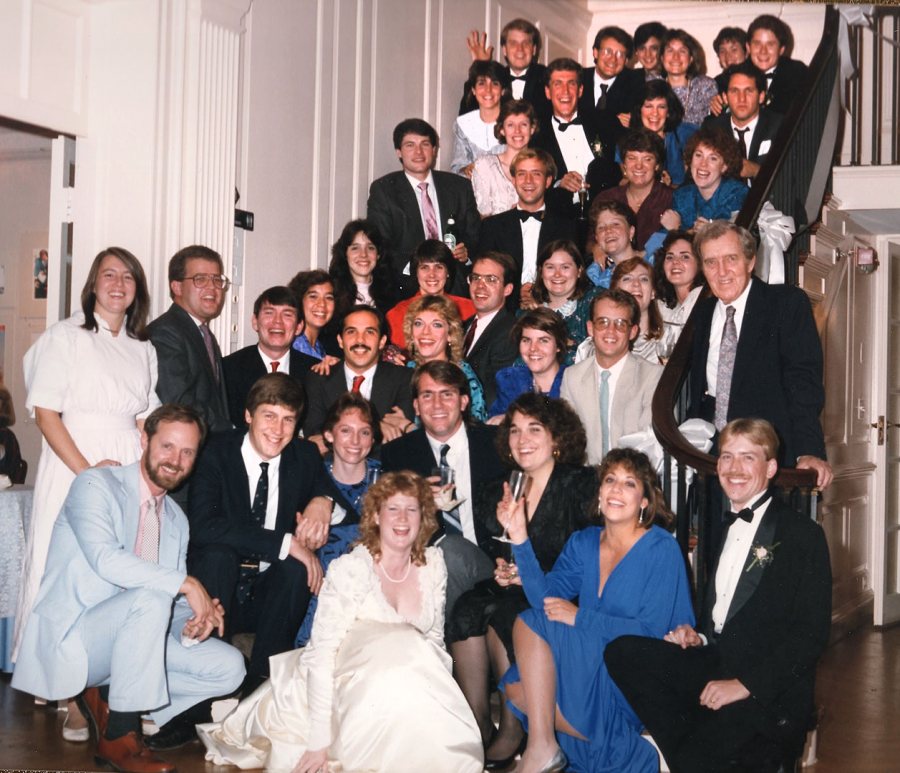 At the October 1987 wedding of classmates Graham Anderson ’85 and Shannon Billings ’85, there were 39 Bates alumni among the wedding guests, including the late Edmund S. Muskie ’36, hard to miss at middle right.

The people I spoke with alluded to the mesmerizing quality of 60 percent, how it foreshadows our transformation from single undergraduates sitting in Commons to adults married to someone who once possibly grazed next to us at the salad bar.

(And lest you think that students don’t ponder marriage: Think again. A classmate who’s a sociology major found that marriage is quite on the minds of Bates students.)

Perhaps 60 percent represents residual social pressure to find a mate. For women of another era, one goal of college was to find a husband, and 60 percent could reflect lingering social demand. 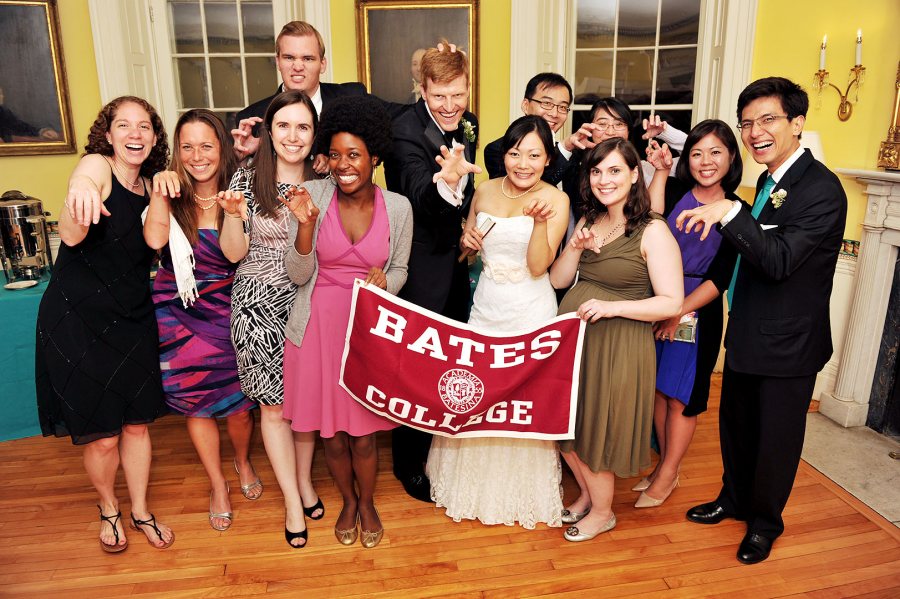 Bates friends of Akiko Doi ’07 and Christopher Theile ’07 adopt the Bobcat pose at their wedding in September 2013. Over time, the politics of marriage has influenced Bates’ very well-being.

Or, rather than some heteronormative notion of marriage, where men and women express traditional gender roles, maybe 60 percent embodies something else altogether: the lifetime bond shared by all Batesies.

In this sense, the statistic conveys the notion, or at least the hope, that most of us will remain connected in some capacity, with marriage merely being the traditional way for us to conceptualize a lifelong committed relationship.

Belief in the statistic speaks not to reason but to emotion; not to marriage but to friendship; and not to individuals but to community.

“The myth of very high numbers of Bates people marrying each other is simply another translation of what Bates people do do,” offered longtime administrator Bill Hiss ’66, “and that’s make very good friendships and keep those friendships for a lifetime.” 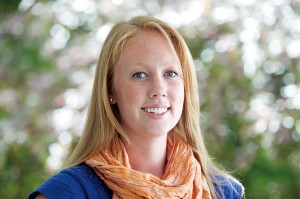 From the moment the statistic spurs freshman-year intrigue, the 60 percent myth forges and then perpetuates alumni identity. It provides comfort and a sense of belonging, alluding to a lifelong bond.

We hold the myth like a protective Bates shield, Chrissie Grover ’10 says. “There’s something special we gained at Bates that unites us.”