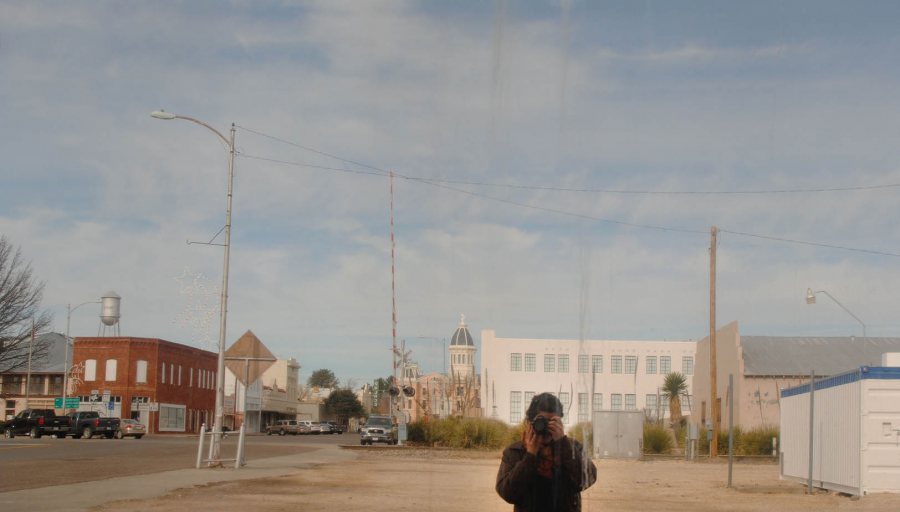 Martha Schnee ’15 in a self-portrait in Marfa, Texas.

In the end, it all worked out fine. Better than fine, even. 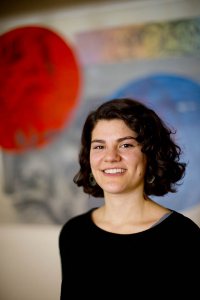 But around 8:30 a.m. on New Year’s Day 2015, as a sleep-deprived Martha Schnee ’15 was climbing into the pickup truck of a rancher she did not know in Marfa, Texas, she had some doubts.

“This guy’s wearing a cowboy hat and a bandanna and he’s 30-something. And he says, ‘All right, we’re going to my ranch,'” says Schnee. “I look down and there’s a gun two inches from my left foot.

“I was sort of conflicted about it. But I said to myself, ‘All right, I’m just going to do it.’ ”

Ah, the things Bates students will take on for thesis. Schnee (rhymes with “hay”) was doing field work in Marfa for an honors thesis exploring questions of identity — civic, cultural and personal — and representation. The rancher, hearing about her work from a third party, had called out of the blue to invite Schnee on his daily routine.

A high desert town of about 2,000 souls in far western Texas, Marfa’s wider claim to fame is its unlikely status as a center for Minimalist art, thanks to the three-decade presence of the late artist Donald Judd.

“You’re driving through the desert for hours and then you just happen upon this tiny one-stop-light town — and there are contemporary art galleries lining the streets mixed with dilapidated buildings,” says Schnee, an American cultural studies major from Newton, Mass. 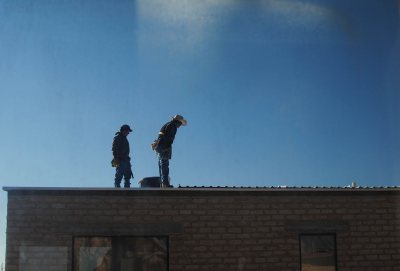 Workers on a rooftop in Marfa. (Martha Schnee ’15)

Schnee had spent 24 hours in Marfa during a cross-country drive early in 2014, and came away captivated. It seemed to say something about Marfa that, right off the bat during that first visit, she met poet CAConrad, a favorite of hers, and ended up having lunch with him.

(In typical small-Bates-world fashion, Conrad later turned up at Bates to read from his work, invited by English professor Eden Osucha — at the time Schnee’s thesis adviser. With Osucha on leave, Melinda Plastas of the women and gender studies program is now Schnee’s adviser, with guidance on ethnographic research coming from anthropologist Josh Rubin.)

A photographer and writer, Schnee is weaving her thesis from images, interviews with 13 diverse Marfa residents and creative nonfiction writing. If the mythology of the Old West is part of the context, Schnee is hewing closer to a more recent scholarly movement known as New Western History. She’s using the town as a case study in how, as stories of place are told, attitudes about race, class, gender and the environment determine whose voices prevail.

The thesis, she explains, examines past and present Marfa narratives for what, and who, they do and don’t represent. “What don’t we normally see in depictions of the place? Whose voices can we hear more loudly, more clearly? Whose voices are quieter?” 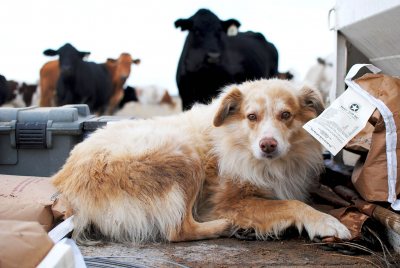 Get along, little doggie. (Martha Schnee ’15)

And one of the identities at play in Schnee’s Marfa project is her own, as she explores the dynamic role of self in her perceptions and in others’ perceptions of her. “I’m not ignoring the fact that it’s a very subjective project,” she says.

“I felt strange about my place as a researcher in this space that already seems constantly scrutinized. I felt that I was adding to a problem in some ways, and that was a really strange position to be in.” Social scientists describe it as reflexivity: the mutual influence exercised by the researcher and the researched.

Photographing Marfa residents was especially fraught for Schnee, who is acutely aware of the power dynamics that a lens can generate. Whose image is it, anyhow? “One woman told me there’s a zoo animal kind of feel for the people that live there,” she says, “and after I heard that, I rethought a lot of what I was doing.”

Ultimately, she says, “I was just trying to come in with an open mind, and not just take these people and use them for my own work. A lot of the idea behind American cultural studies, and my project itself, is to ideally make something that I can give back to the community. It’s about uncovering hidden power structures, connecting those back to history and then trying to figure out a way to give something back through making the invisible more visible.” 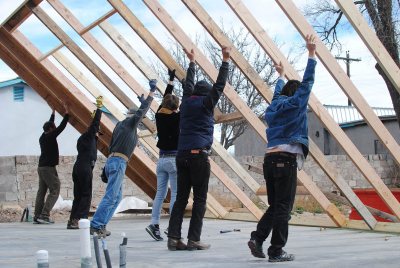 Despite her misgivings about appropriating Marfa’s identity, even as she was investigating how such things happen, Schnee left the little town “blown away,” as she says, by the human kindness she encountered.

“Nearly everybody I encountered was willing to help me,” she says. That generosity even included a resident’s invitation to stay in his home during his absence.

And, of course, the invitation to witness a few hours of a rancher’s life. (We’ll call the rancher Sam, as ethnographic researchers are obliged to protect their subjects’ anonymity.) The five-hour tour of Sam’s operation outside of Marfa, says Schnee, “just, of course, ended up being the most amazing experience.” The rancher fed his hundreds of cattle, checked their whereabouts and broke the ice crusting their water supplies so they could drink.

Early on, Sam pointed out a group of cows on a hill acting standoffish, which told him that there were new calves. “It’s New Year’s Day and I’m seeing these calves being born into the world, surrounded by desert and distant mountains, and the sky is enormous,” Schnee recalls. “And I remembered how afraid I was at first, and smiled at the situation, at the niceness of this complete stranger.” 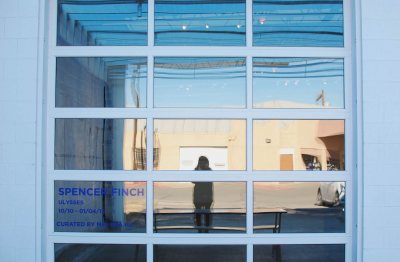 Martha Schnee ’15 captures a self-portrait reflected in the facade of a Marfa art gallery.

Sounds dreamy or at least cinematic, but in terms of her thesis, the encounter with the rancher was a definitive episode during Schnee’s three weeks in Marfa. Sam personified a key conflict of identity in Marfa: Traditional Texas, with all the attendant realities and myths, vs. the international art destination.

“He talked a lot about art and not understanding it, and the experiences of meeting all these people coming through town,” says Schnee.

Sam told her, “I want to show you what my life is like so you don’t have this misperception of what I do. If you see it, you can go back to the East Coast and talk about actually experiencing what I do,” Schnee recalls.

“And I thought, what could be better? This immersive experience in another reality was exactly what I wanted. And all it took was sacrificing a few hours of sleep and being OK with getting into a stranger’s truck.”