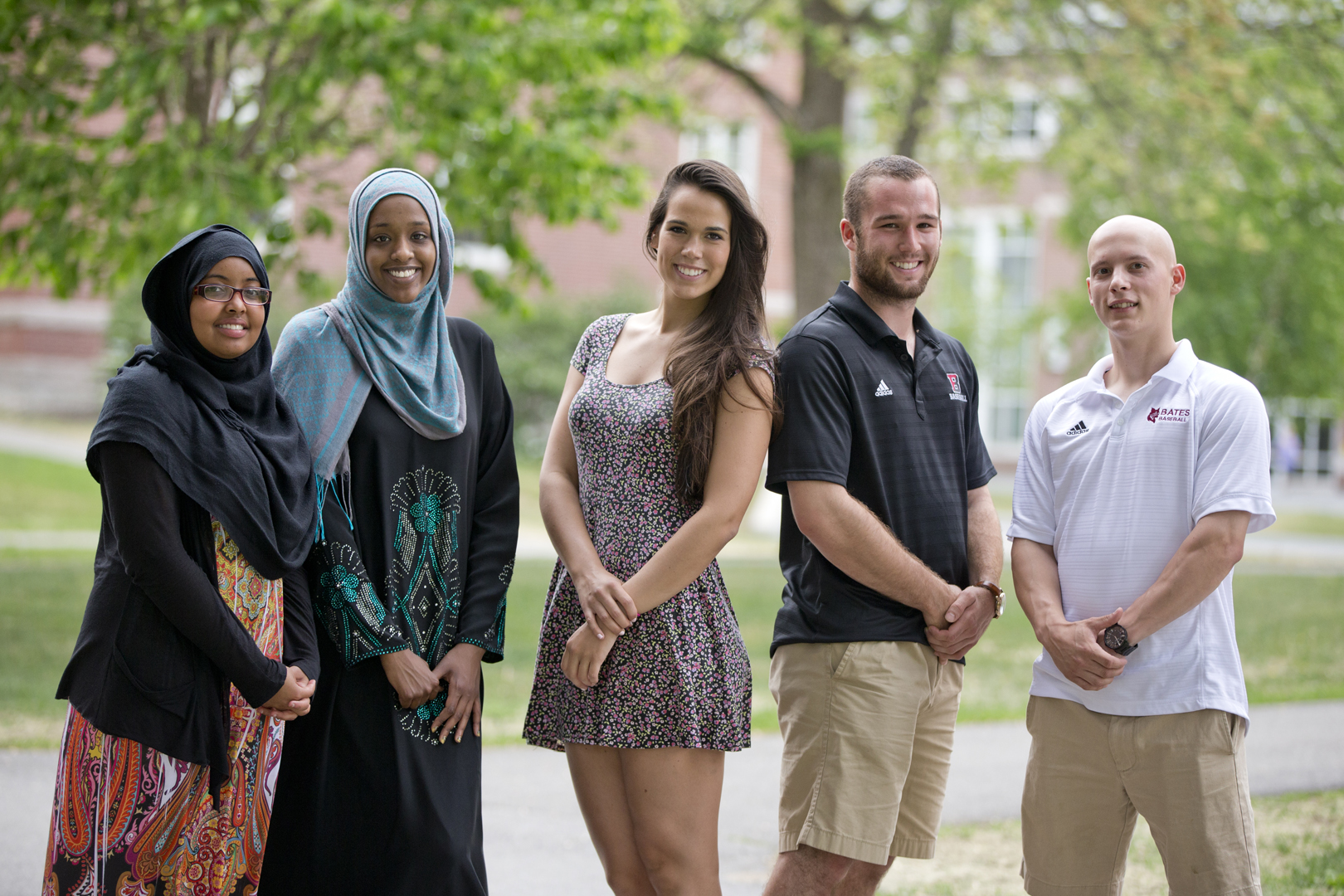 The Class of 2015 counts members from as far away as Arkansas and Zimbabwe, but this year’s graduates also include five young men and women who attended Edward Little High School, Lewiston High School, and Saint Dominic Academy – the largest number of Lewiston-Auburn students in any graduating class in recent memory.

It’s not unusual for young people to want to put some distance between where they grew up and where they go to college. In Maine, researchers have noted that approximately half of the state’s college-bound high schoolers opt for an out-of-state college. So why then did these five standout students choose Bates when they had their pick of colleges and universities elsewhere?

Their reasons resemble those you hear from students from all over the country and the world who choose Bates: our unique sense of community, generous financial aid, and a rigorous liberal arts education, for example.

But there were other reasons too, such as a desire to continue an athletic career or the security of having a built-in support system of local friends and family. 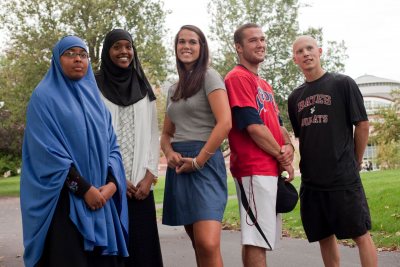 The five seniors as they were as first year students in September 2011. ‪(Phyllis Graber Jensen/Bates College)

Asha Mohamud said the opportunities Bates offers rival those of much bigger colleges, which made choosing to go school close to home that much easier. Mohamud attended Lewiston public schools and so she knew from her years of interactions with Bates student tutors that the college attracts young people with traits and ideals that appeal to her.

“I had Bates mentors throughout elementary school who embodied all the essential elements of Bates,” said Mohamud, a biology major and graduate of Lewiston High School. “Their commitment to service as well as pursuing work that served the Lewiston community was touching. Their influence in my life contributed to me wanting to go to Bates.”

Leigh Weisenburger, the college’s dean of admission and financial aid, is leading the college’s more focused outreach and recruitment at local high schools, exposing more Lewiston-Auburn and Maine students to the liberal arts and the diverse opportunities that await them close to home. Next September, for example, Bates is sponsoring a Lewiston High School aspirations coordinator’s travel to and participation in a national conference on college admission and counseling. 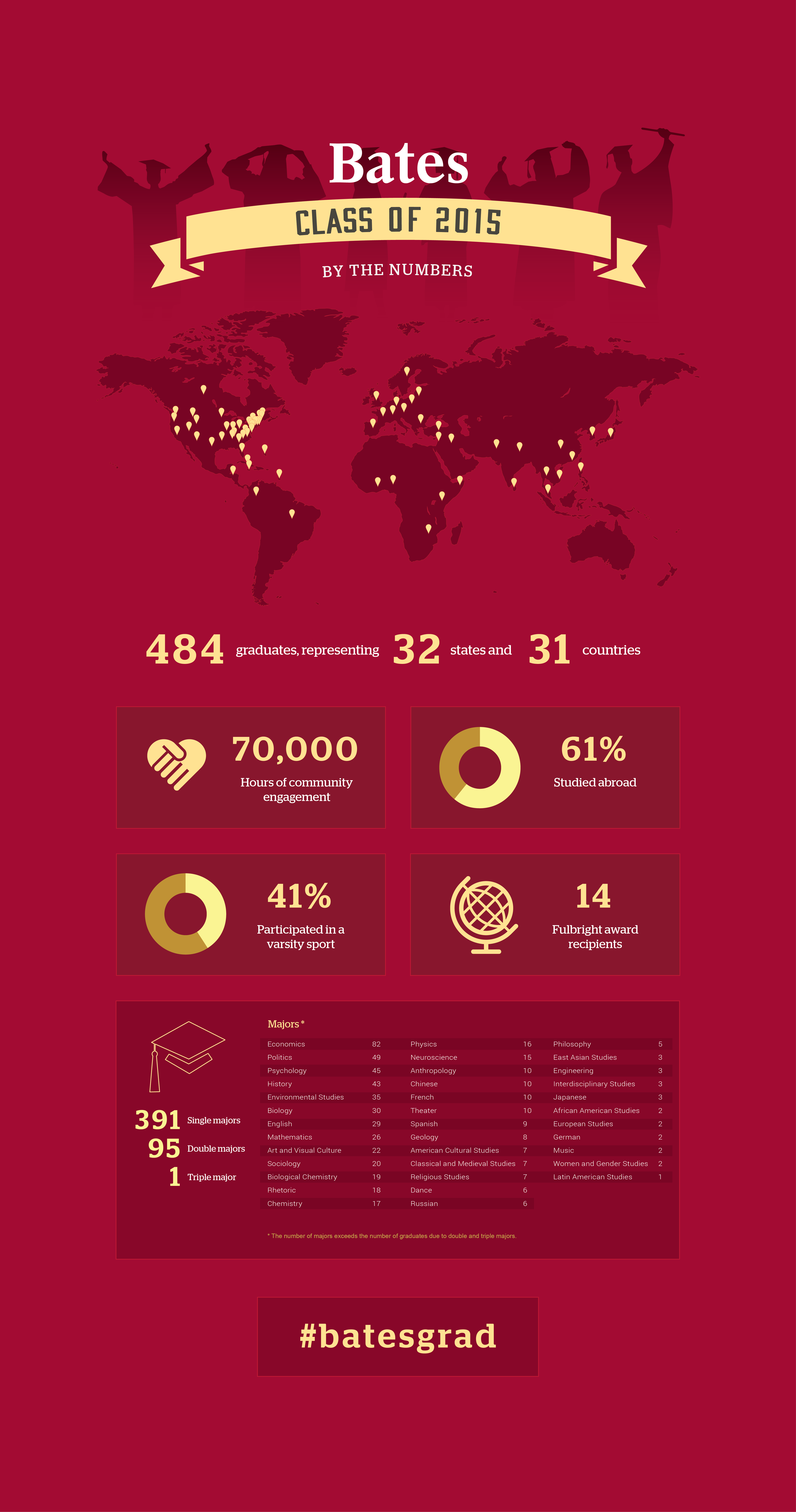 “Our hometown is of great importance to us, and we always try to have a steady representation from our Lewiston and Auburn communities,” Weisenburger said. “It’s exceptional that we have in the Class of 2015 five graduates who represent all three of our local high schools.”

In addition to the five local seniors, there are about a dozen other Lewiston and Auburn natives enrolled at Bates. They are among the more than 175 Maine students attending the college, roughly 10 percent of the student body. Collectively, the Maine students receive more than $5 million in financial aid, scholarships, and grants from the college.

“Local students get the best of both worlds and it would be imprudent to pass up such a great experience simply because the college is located in Lewiston.”

Alex Parker, a Lewiston native and St. Dom’s graduate, chose Bates because the college offered him the chance to continue playing baseball while pursuing a liberal arts education. Financial aid was also a big factor, he said.

“Bates has so much to offer — a diverse curriculum with amazing professors, a strong school culture of inclusiveness, pride, and supporting each other, a beautiful campus and a great dining hall, and an athletics program that has grown each year I have been here,” said Parker, a politics major and All-Academic NESCAC honoree in baseball.

“However, the people you will meet at Bates are the number one reason to consider Bates. I love attending a school with a diverse student body so that I could meet people from all over the U.S. and the world.”

Allania Murphy said she too found the college’s diversity inspiring and educational in ways she did not anticipate.

“Becoming friends with kids from all around the world and from all different cultural, religious, racial, and socio-economic identities and backgrounds has opened my eyes to so much that I never realized or was exposed to growing up in the Lewiston community,” said Murphy, who graduated from St. Dom’s in Lewiston and played three years on the Bates women’s basketball team.

When Auburn’s Naima Qambi was considering colleges, she initially thought Bates was just too close to home. She changed her mind after participating in one of the college’s visit programs where first-generation college-goers spend several days and nights on campus experiencing everything Bates has to offer.

“Being from the community, it was important for me to give back,” said Qambi, an education major and member of the Bonner Leader Program, which engages students in community service, work, and learning during their four years at Bates. “Through the Bonner program, I worked with the Lewiston Public Library tutoring program, Tree Street Youth, and the Hillview Housing Complex.”

None of the local students graduating Sunday say they regret going to college so close to home. If anything, it enhanced their college experience and provided welcomed support systems.

“Some semesters I went home once a week, other semesters I did not go home at all,” Murphy said. “In my opinion, local students get the best of both worlds and it would be imprudent to pass up such a great experience simply because the college is located in Lewiston. Now as I get set to graduate, I feel prepared to enter the workforce or go to grad school because of my Bates education.”