What started as a way for Nicolette Robbins ’11 to spend her final Short Term has become groundbreaking research on what it’s like to come out as an asexual person.

Robbins is the lead author of “A Qualitative Exploration of the ‘Coming Out’ Process for Asexual Individuals,” published in September in the journal Archives of Sexual Behavior.

In the creation of this new knowledge, Bates friendship and mentorship run deep: Robbins’ coauthors are her thesis adviser, Professor of Psychology Kathy Low — who Robbins says “always gives me a chance to learn from her” — and her classmate and friend, Annie Query. 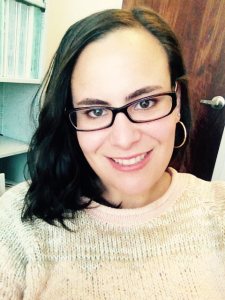 Nicolette Robbins ’11 uses the findings from her senior thesis in psychology to publish groundbreaking research on the experiences of coming out as asexual.

Asexuality is defined as when someone experiences little or no sexual attraction, and is thought to describe perhaps 1 percent of the population.

Thanks to years of research, we know quite a bit about the LGBTQ coming-out experience. But no similar research has been done on the asexual side. Now, thanks to Team Robbins, we know that the two experiences are psychologically comparable — with one major exception, having to do with the Internet.

The similarities include what happens first, “feeling different at puberty,” says Robbins, who is a research assistant at the Yale School of Medicine looking ahead to graduate school.

“That’s a ubiquitous experience in the realm of alternative sexuality, feeling different, confused, that something is wrong. These are common experiences.”

Other similar themes include the impulse to come out as asexual as an act of self-expression and a way to achieve “identity salience,” a term that describes how our various self-identities (parent, churchgoer, employee, gay person) tend to get along.

While homosexuality is a known and accepted type of sexuality, asexuality isn’t quite there yet. So for someone to come out as asexual, the person first has “to discover that this is even a legitimate option,” Robbins says.

This is where the Internet comes in.

For someone discovering the concept of asexuality, everything from learning terminology to finding a community typically occurs online. People who start to explore their asexual identity tend to find “direct online interaction with other asexuals to see if the identity is an apt fit,” a process that Robbins calls “pivotal.”

The online aspect makes the asexual coming-out experience “unique,” Robbins says. Indeed, the Internet has played a “crucial role in legitimizing asexuality and building a community.”

“The Internet has always helped to facilitate the emergence of different types of sexuality and allowed those people to feel that they are not alone,” Robbins adds.

New information that can “inform interventions, programming, therapy and other kinds of interactions with individuals who identify as asexual.”

From her experience as both a researcher and clinician, Low says the new research helps to further “legitimize the orientation” of asexuality, and it gives teachers, counselors, and clinicians information to “inform interventions, programming, therapy and other kinds of interactions with individuals who identify as asexual.

“If I were doing therapy with an adolescent who was asexual, I might search the published literature to learn more, and turn up this article, which describes what at least one sample of asexual individuals report experiencing.”

Robbins got the idea to pursue asexuality as she pondered her senior thesis. She had set the bar pretty high. “I wanted to look at something totally new.”

Her mind kept going back to one of Low’s psychology courses, “Women, Culture, and Health,” and she recalled how Low had created a safe place in class to talk about “things people don’t talk about” in the realm of sexuality.

“I thought I could do it all.”

Around the same time, Low had seen a call for research on asexuality from another scholar. She mentioned it to Robbins, who “looked into it. At the time there were only about seven publications on asexuality.”

So Robbins launched herself into a broad thesis project, hoping to survey a sample of asexuals; study the relationship between asexuality, sexual aversion, and sexual desire; and gain a better understanding of the coming-out experience for asexuals.

“I thought I could do it all,” she says.

But the topic may have met her “totally new” criterion a bit too well. Robbins couldn’t find enough answers to get her started.

“We couldn’t even answer the question ‘How many asexuals are there?’ Every study we looked at used different criteria to recruit their sample. The prevalence went all the way from 0.03 percent of the population to 1 percent.”

So Robbins pulled a Hannibal of sorts, finding a way by making her own.

She created her own statistically valid questionnaire and obtained 169 coming-out narratives from subjects recruited from online communities dedicated to asexuality.

“I don’t like the idea of creating something that assigns identity.”

In the end, the experience of creating the questionnaire, not the narratives themselves, formed the major part of Robbins’ final thesis. And while Robbins is proud of the thesis — it won her the department’s Drake Bradley Prize in Statistics — she’s ambivalent about the questionnaire.

“For me, I don’t know if assigning an official label is helpful when really what I want to get across to the public is that asexuality is so diverse.”

“Rather saying that a person is more asexual or less asexual than someone else,” she says, “it’s more helpful to say that they are just asexual in a different way.”

With her thesis completed, Robbins used her final Short Term to take a good look at the narratives. Annie Query, her friend and fellow psych major who has since earned a master’s in social work from the Smith College School of Social Work, helped review and rate the narratives.

“We then came together and discussed the emergent themes we had found,” Robbins says. 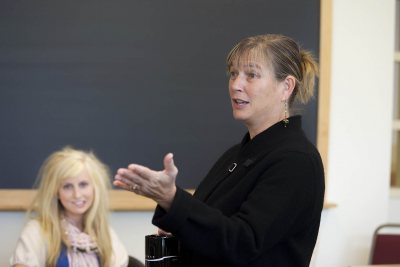 A research assistant at the Yale School of Medicine looking ahead to graduate school, Robbins says that Low has “helped me achieve pretty much every single step from college to now.”

For her part, Low says the successful publication of the research reflects Robbins’ “exceptional tenacity.” While many seniors create publishable work, many have “difficulty returning to thesis and editing it down to manuscript length.”

Robbins, however, “really took the initiative with this, and it is a real accomplishment to be first author on a paper like this just a few years out of Bates.”

A biennial Bates survey shows that around 85 percent of graduating seniors say they’ve developed a close and personal relationship with at least one faculty member.

“Kathy always has a million things going on but she always makes time,” Robbins says. “When I wanted to aim for the top journal, she supported it even though she thought was a longshot” because of the qualitative nature of the research.

Low helped Robbins line up summer research work at Bates, and just last summer suggested that two present their research at the International Congress of Behavioral Medicine in Amsterdam.

“Not many people have the opportunity to get that close and feel so supported by a professor,” she says. “I had the greatest experience at Bates and I think a lot of that was the psychology department.”

Another faculty member, Professor of Psychology Amy Douglass, invited Robbins to co-present research at the 2011 American Psychology and Law Society Conference in Miami. Robbins had helped Douglass on the research, but still, “she didn’t have to take a chance on me as an undergraduate. But she did.”

At Yale, where she’s working on an Alzheimer’s study, Robbins has found that her undergraduate experience is distinctive, “having written a thesis and still having strong relationships with my Bates professors — and getting the chance to publish a paper with my thesis adviser.”

Now applying to graduate school in clinical psychology — with a nifty new credential on her resume — Robbins says Low exemplifies a “type of career I might want to have. She’s a professor, clinician, and researcher.

“That’s the Holy Grail for me.”