‘Mass Incarceration and Black Citizenship’ at issue for MLK Day 2016 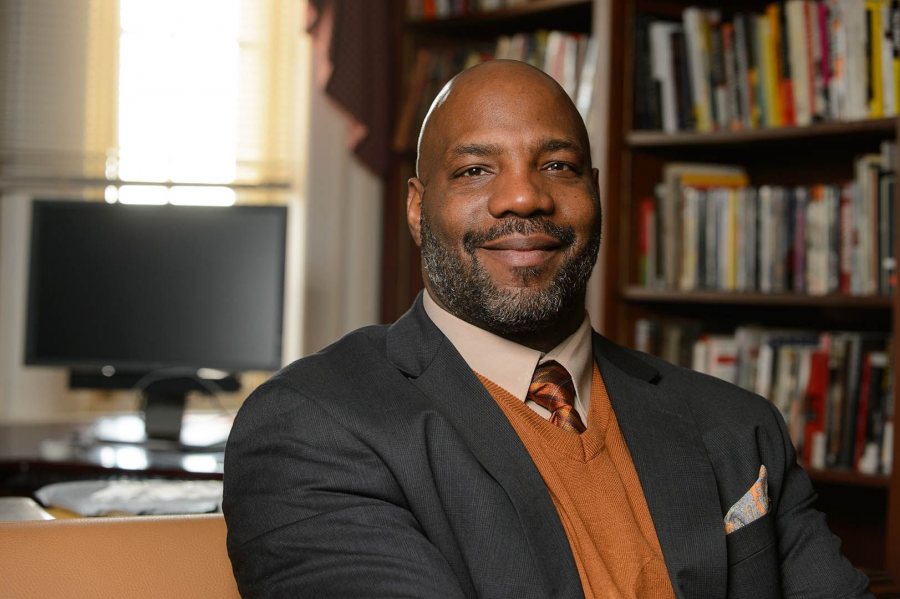 Why did Bates choose “Mass Incarceration and Black Citizenship” as the organizing principle for its 2016 Martin Luther King Jr. Day observance?

“The relationship of black citizenship to incarceration forces uncomfortable questions about the ways in which democracy produces forms of freedom and unfreedom simultaneously,” says Petrella. He is a doctoral candidate at the University of California, Berkeley, where he studies the relationship among race, incarceration, and modern capitalism.

“The prison is the pre-eminent site where the paradox of black citizenship takes on a material form.”

In three days of programming beginning Jan. 17, the college will scrutinize the MLK Day theme through workshops, panel discussions, films, and other activities.

A highlight of the Bates observance is an appearance by William Jelani Cobb, a nationally known commentator on race, politics, culture, and history, who will give the livestreamed keynote address at 9 a.m. on the 18th in the Peter J. Gomes Chapel.

On the Jan. 18 MLK Day holiday, in addition to Cobb’s address, events include:
•    two sessions of concurrent workshops exploring race, law, justice and reform;
•    a 3:45 p.m. debate between students from Bates and Morehouse colleges;
•    and a 7:30 p.m. performance by the student group Sankofa, which uses dance, music, spoken word, and more to explore stories of the African diaspora.

Although admission is free, tickets are required for the debate and the Sankofa performance. Ticket information and the full schedule of programming appear on Bates’ MLK Day homepage.

Cobb’s keynote address for the Bates MLK Day observance is titled The Half Life of Freedom. A staff writer for The New Yorker, where he uses the byline Jelani Cobb, he is also the author of the books The Substance of Hope: Barack Obama and the Paradox of Progress (Bloomsbury, 2010) and To The Break of Dawn: A Freestyle on the Hip Hop Aesthetic (New York University Press, 2007).

Cobb is an associate professor of history and the director of the Africana Studies Institute at the University of Connecticut. In his research and teaching, he specializes in post-Civil War African American history, 20th-century American politics, and the history of the Cold War.

Cobb’s writing has appeared in The Daily Beast, The Washington Post, Essence, Vibe, The Progressive, and TheRoot.com, and he has been featured on MSNBC, National Public Radio, CNN, Al Jazeera, CBS News, and other major broadcast outlets.

Born and raised in Queens, N.Y., Cobb was educated at Jamaica High School, Howard University in Washington, D.C., and Rutgers University, where he received a doctorate in American history in May 2003. 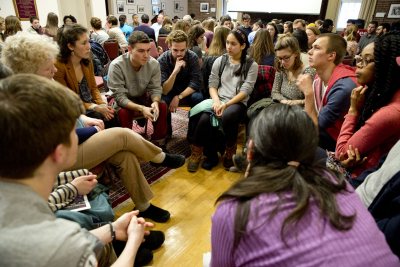 Members of the Bates and Lewiston-Auburn communities share their views in the Muskie Archives during the 2015 MLK Day workshop “Perspectives on Ferguson.” (Phyllis Graber Jensen/Bates College)

In the United States, race and confinement have been historically intertwined, beginning with slavery and leading to today’s marked racial disparities in incarceration rates. Incarceration, and contact with the criminal justice system more broadly, is a fact of life for many African American males in inner cities.

The U.S. currently has the highest incarceration rate in the world, with American prisons and jails accounting for 25 percent of prisoners globally.

This year’s MLK Day programming “will help students and guests understand the historic roots of the structures of mass incarceration that are apparent today,” says Mara Tieken, assistant professor of education at Bates and a co-chair of the MLK Day planning committee.

“In so doing, they’ll begin to realize that there’s nothing accidental or happenstance about our racialized prison system — these are inequities the U.S. has created,” she says.

“I hope they’ll also come to see the potential for creating a more racially equitable society as they hear from folks living, learning, and working in the prison system.”

Workshops will explore the “Mass Incarceration and Black Citizenship” theme from a variety of angles. Providing context are a Jan. 17 screening of the 2012 documentary Broken on All Sides (2 p.m., Olin Arts Center, Room 104) and, the following day, the workshop “Prison 101,” an introduction to the topic (8 a.m., Gomes Chapel).

The intersections of youth, race and the criminal justice system are at issue in three workshops, including a performance of and discussion of a play, performed by residents of the Long Creek Youth Development Center, that examines race through the eyes of incarcerated individuals.

The Monday afternoon debate by students from Bates and Morehouse colleges, and the evening performance by Sankofa, are among the best-attended MLK Day events at Bates. 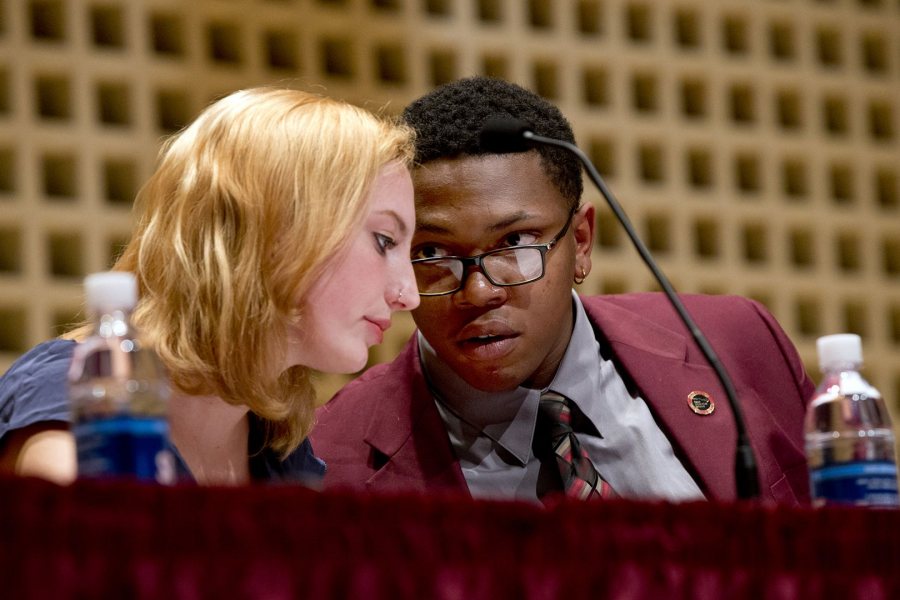 Taking place at 3:45 p.m. Jan. 18 in the Olin Concert Hall, the Rev. Benjamin Elijah Mays ’20 Debate (named in honor of the Bates alumnus who became a mentor to King and president of Morehouse) this year takes on the motion: “To ameliorate racial discrimination in the criminal justice system, this house believes that police reform is more important than prison reform. ”

Sankofa explores the history and diverse array of experience of the African diaspora through forms of expression including dance, music, theater, and spoken word.

Sankofa’s annual Martin Luther King Jr. Day production has become a symbol of pride for members of the African diaspora at Bates, and an educational and diversifying experience for the entire Bates community. 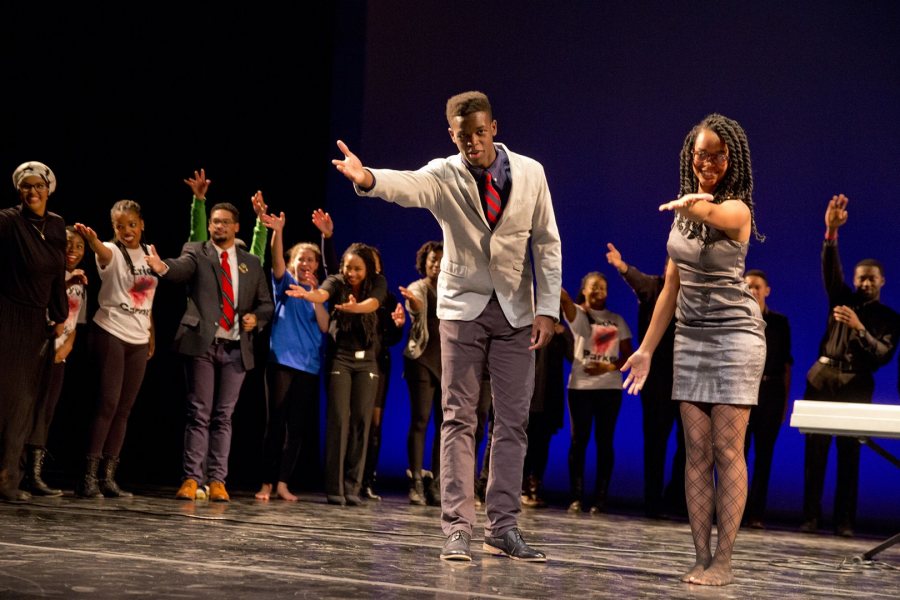 Titled All That We Are: The Afro-Woman’s Story, this year’s production brings to light the experiences and stories of women of the African diaspora, internationally linked by the theme of storytelling and friendship. An open dress rehearsal takes place at 4 p.m. Sunday, Jan. 17, and the actual performance at 7:30 p.m. on the 18th, both in Schaeffer Theatre. Tickets are required for both.