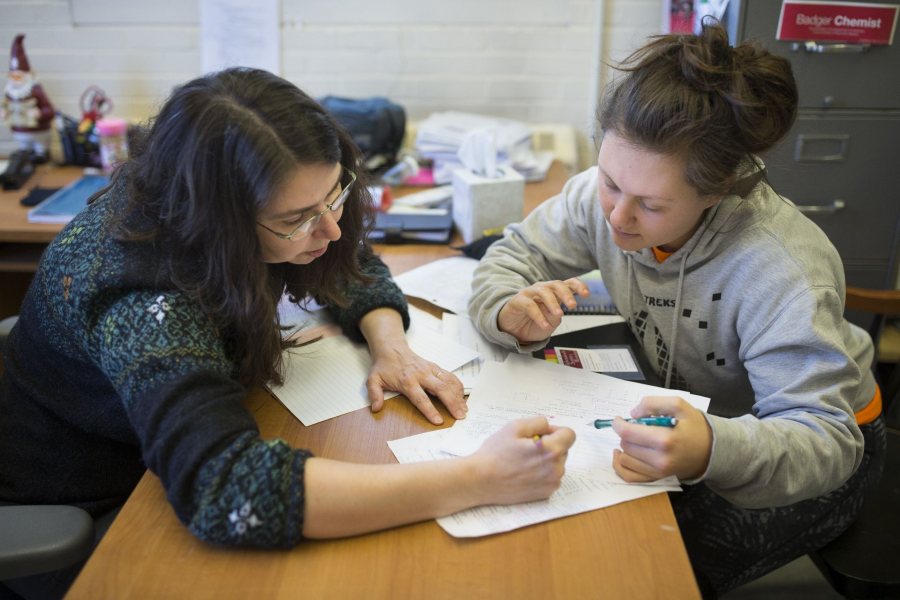 When Professor of Chemistry Paula Schlax first got into teaching, she brought with her a few assumptions about students, the nature of teaching, and the professor-student relationship.

And like any good scientist, Schlax was smart enough to realize that her hypothesis wasn’t quite right and needed revision. The result, she says, made her a better teacher and mentor to her students.

Her care for students has a goal: “to help them get to where they need to go.”

“My teaching really improved when I realized that not all students thought the way I did,” says Schlax, who came to Bates in 1998. “I also thought that I could leave teaching and home separate, that students were students — they were just part of the job. It really can’t be that way.”

Over the years, Schlax has found that she “really cares about these students,” and that her care for students has a goal: “to help them get to where they need to go and where they want to go. If I don’t do that, I’m not sure I’m doing a good job.”

Schlax is doing more than a good job as evidenced by her winning the 2016 Kroepsch Award for Excellence in Teaching. The award, the college’s signature honor for great teaching, was established in 1985 by a gift from Robert Kroepsch ’33. Nominated by students and alumni, recipients are selected by a committee of previous winners.

A biological chemist, Schlax has studied the bacteria that causes Lyme disease, its genes, and the “switches” that control them — research that recently earned her a three-year, $345,750 grant from the National Institutes of Health that will also support research opportunities for Bates students. It’s during those hours in the lab, Schlax says, that students undertake “real science.”

“Bates is particularly well-poised — with our required thesis and our open-ended laboratories — for us to basically teach students to do research,” Schlax says.

“Students can collaborate with us on our research, and honestly everyone in our chemistry department feels that is some of the most important teaching that we do.”

Schlax doesn’t consider herself a standout teacher. She would rather share the spotlight with her chemistry department colleagues, who Schlax describes as an extremely congenial group of professional supporters, mentors, and teachers.

Paula Schlax delivers her Kroepsch Lecture, “This Talk is Not Called ‘Exposing Students to Lyme Disease,’” at 4:30 p.m. Friday, May 13, in the Keck Classroom (G52) in Pettengill Hall.

“We have such amazing teachers here in this department,” Schlax says, adding that she’s “learned so much” working with her chemistry colleagues Glen Lawson, Tom Wenzel, Matt Côté. and Jen Koviach-Côté.

In fact, when Schlax was told that she won the Kroepsch Award, she didn’t believe it. 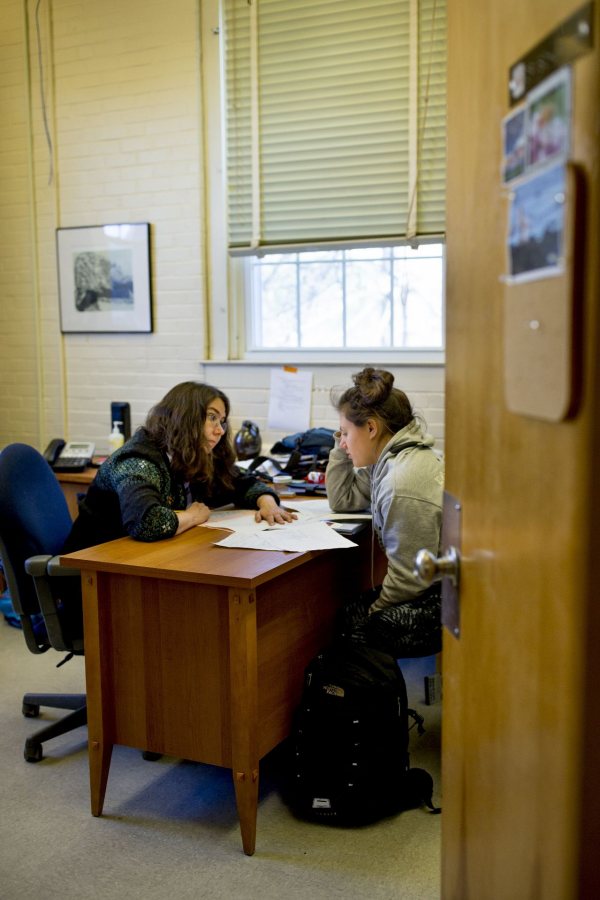 Paula Schlax is the 2016 winner of the Kroepsch Award for Excellence in Teaching. (Phyllis Graber Jensen/Bates College)

“It was a complete shock,” she says of the meeting in which Matt Auer, the college’s vice president for academic affairs and dean of the faculty, told her she was this year’s winner.

“I actually thought that the dean was joking, I really did. … We have amazing teachers in the department and I just didn’t believe him. I really was completely taken aback.”

As surprised as Schlax may have been, her students say she deserves every accolade.

“I have come to know and respect her both as a fabulous professor and a dedicated mentor who truly cares about her students,” says Anna Turner ’18 of Brunswick, Maine, who has taken three classes with Schlax so far.

“From meeting outside of normal office hours, to inviting the entire Short Term class to her house to see her beehives, to offering guidance and empathy to students dealing with nonacademic issues, Paula goes above and beyond to foster growth in her students.”

Schlax hails from a family of educators. Her mother taught special education, her aunt was an art teacher, and her younger brother is, in her words, a “phenomenal” and “superb” high school chemistry teacher. Her brother, in fact, was her first student — even if it was just pretend.

“We used to play in the woods and pretend we were scientists when we were kids, and we played school a lot, too, of course. And since I was older, I got to be the teacher.”

And now, as an adult, Schlax is both a “for real” scientist and a teacher — a dual role that fits perfectly with her passion for creating knowledge and shaping young minds.

“I love science, I love doing research, but ultimately there are very, very few scientists that make such an impact in the world that it’s going to be their lasting legacy,” she says. “As a teacher, you really can influence people, help them find what they’re good at, what they’re not good at, what they like and what they don’t like, and you can make a real difference in a lot of students’ lives.

“For me, that’s really important.”