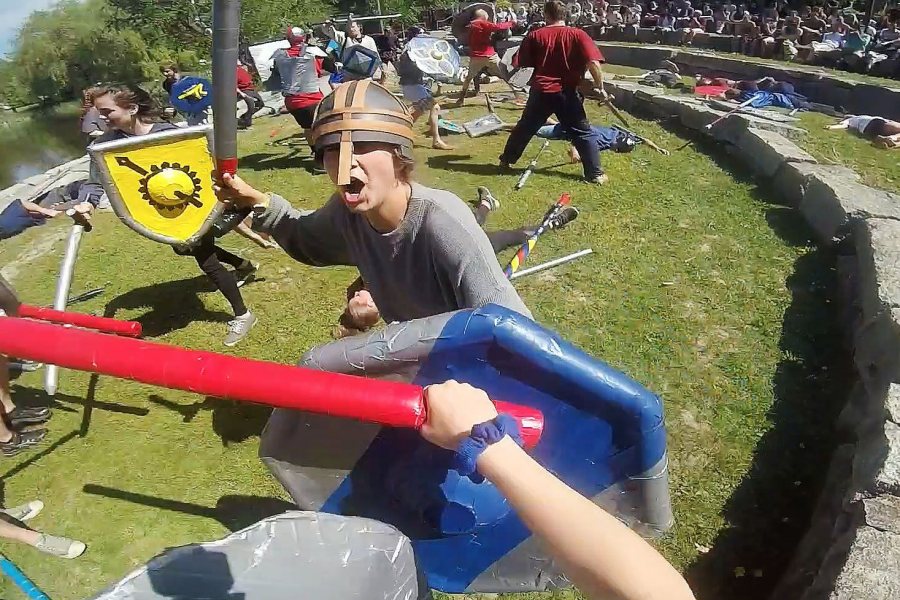 An English soldier does battle with a Viking invader as the Battle of Maldon re-enactment on May 26 at the Keigwin Amphitheater begins. (Josh Kuckens/Bates College)

That famed Anglo-Saxon comedy troupe could’ve been talking the Anglo-Saxon battle re-enactment staged during Short Term: “And now for something completely different.”

Staged on May 26 at the Keigwin Amphitheater, of the Battle of Maldon was a 10th-century clash in Essex, England, between Anglo-Saxons and invading Vikings.

Economics major Will Barstow ’17 of Amherst, Mass., gave the class high marks. Where else, he said, could you “work in the classroom for an hour each day and then go out and battle for another hour. It was great.”

Here are 11 moments from the re-enactment, including a few speeches, which the students adapted from the Old English poem “The Battle of Maldon.”

From the perspective of doomed Norse warrior Beghel (Bella Miller ’18 of New York City), the Vikings travel the ocean (Lake Andrews) and land at Essex, England (Keigwin Amphitheater) to fight the English.

It’s August in the year A.D. 991, and the leader of the English warriors, Earl Byrhtnoth (Hannah Goldberg ’16 of Bronxville, N.Y.), states the Anglo-Saxon case: The Vikings have encroached too far onto English land and must pay with their lives.

(Who pays whom gets mixed up, to humorous effect.)

The Vikings landed on a small island along the River Blackwater where, initially, three English soldiers blocked a few Vikings from crossing over a causeway to the mainland.

The English taunt the Vikings. “You cockeyed crabs!” yells an English soldier. “Do you fear we will cleave your codpiece?”

The Viking band is ordered to fall back.

After a parley, the English allow the Viking forces to cross so that a formal battle can occur. The Vikings show their trademark aggression; the English their defensive style.

5. Spear me the details

An English soldier kills a Viking foe with a knife, catches an incoming spear in mid-flight (a common medieval maneuver) and hands it off to a fellow fighter, who then kills a foe.

An English soldier (Sally Ryerson ’16 of Vail, Colo.) suffers what might be a laceration of the femoral artery. If that’s not bad enough, the soldier gets run through by a Viking sword.

An Anglo-Saxon soldier (Graham Leathers ’16 of Rochester, N.Y.) challenges his comrades: “Remember the noble speeches that we made in the mead hall as we drank the mead? Were you as brave as you said, or were drunk upon the mead? Glory and mead!”

Invoking heaven as a reward for death in battle, an English soldier (Hugh Gorman ’19 of Hingham, Mass.) cries out: “Warriors, fear not death! For the kingdom of heaven is ours!”

9. Bringing a shield to a knife fight

As the fighting gets desperate, an English warrior throws his shield at his foe. Hand-to-hand combat ensues, and another Anglo-Saxon bites the Essex dust.

“Our companions have been hewed and hacked,” he yells, while others have retreated and still others have had their heads removed. Yet he is old, “so my death will bring you no doom!”

The Viking leader, Olaf Trigvason (Will Barstow ’17 of Amherst, Mass.), takes a trophy from a dead Anglo-Saxon, then decides to break the fourth wall and take out the narrator.

“No more to stand against us, now push forward to the village!” he cries. “Take what is ours by right, none will resist, none can stop us!”