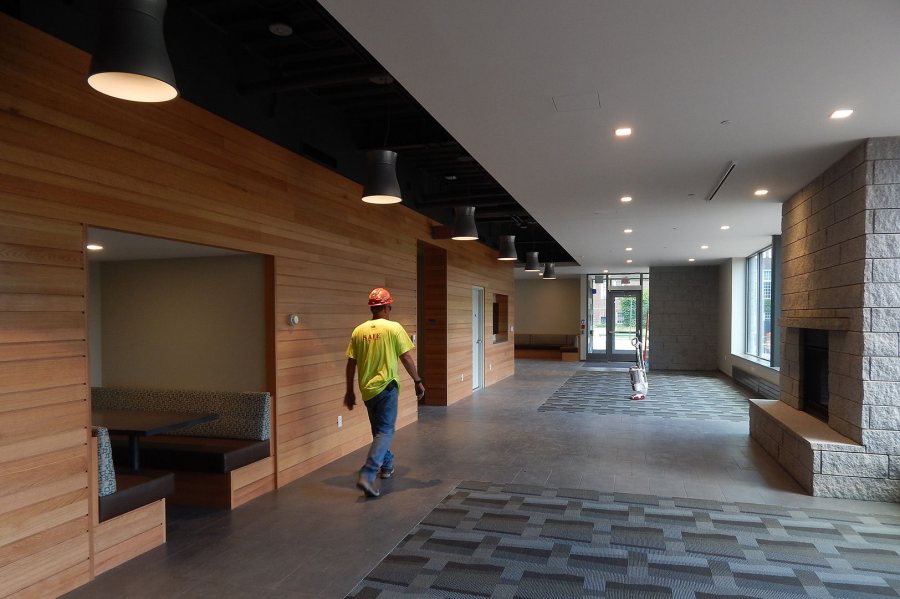 Getting Here From There Dept.: Campus Avenue along the Bates block will be more of an obstacle than a thoroughfare this month as old brick sewer pipes are replaced with green PVC units. 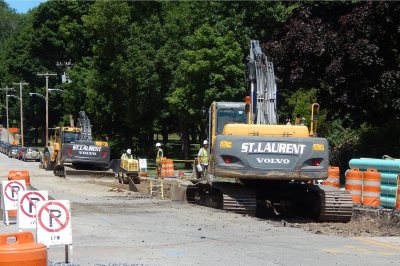 Begun in late June, the project has entailed full closures of most of Campus Avenue and parts of Nichols, Bardwell, and Franklin streets, and will last most of July.

Engaged by the city of Lewiston, the local firm St. Laurent & Sons Excavation is laying the sewerage block by block, starting at Nichols (home of Bates Communications Plaza and the Campus Construction Update penthouse) and heading east to Central Avenue.

The word at press time is that the work at Bates will culminate during the week of the 18th, as St. Laurent grinds off the remaining pavement from College Street to Central Avenue, levels the subsurface (or “shims” it, as the pros say. That will take a lot of folded napkins!), and lays new asphalt.

Building excitement: On the grounds of the new student residence at 55 Campus Ave., recent weeks have shown us a rerun of the transformation that took place at 65 Campus in April and May. 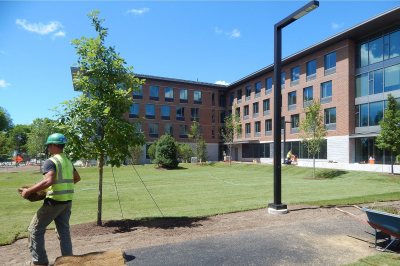 A landscaper at 55 Campus Ave. lugs turf, at lower left, while in the background a mason cuts bricks for a walkway next to the building. The image was taken on June 30, 2016. (Doug Hubley/Bates College)

As recently as May, the residential hall at 55 was a gleaming jewel surrounded by rutted mud, roaring cherry pickers, and construction debris. Now, countless hours of labor later, brave young trees are waving in the breeze, sprinklers are keeping the new grass happy, masons are sprawled on the ground cleaning freshly laid brick walkways, and new lighting is ready to show it all off.

“The difference the landscaping has made in how those buildings look is just phenomenal,” says Chris Streifel, Bates’ project manager for the construction of the two residences.

The transformation of those dorms that form the first phase of Bates’ Campus Life Project took place for all the world to see. But there will be only a select few witnesses when another crucial milestone in the project is reached, toward the end of July.

That’s when Consigli Construction will hand authority over the new residences to Bates. 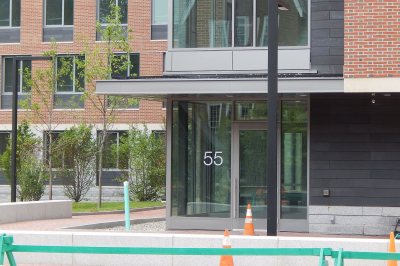 The college, Consigli, and project architect Ann Beha Architects will formalize that handover with a document called a Certificate of Substantial Completion — “substantial completion” being the point where the governing municipality, through a Certificate of Occupancy, has documented that a building is safe, habitable, and ready to give its owner beneficial use.

Attaining substantial completion also activates the warranties on a project, for both equipment and the construction itself.

So what will happen between now, and then the certification of substantial completion in a few weeks, and finally the time in August when the first students occupy their rooms?

Moving two deeply rooted campus operations looms large on the checklist. On July 18 —the same week St. Laurent will be repaving Campus Avenue, Streifel notes wryly — the College Store will start its move from the Chase Hall basement into its new home on the first floor of 65 Campus Ave. It’s hoped that the store can open — a “soft opening,” as they say — on the 25th. 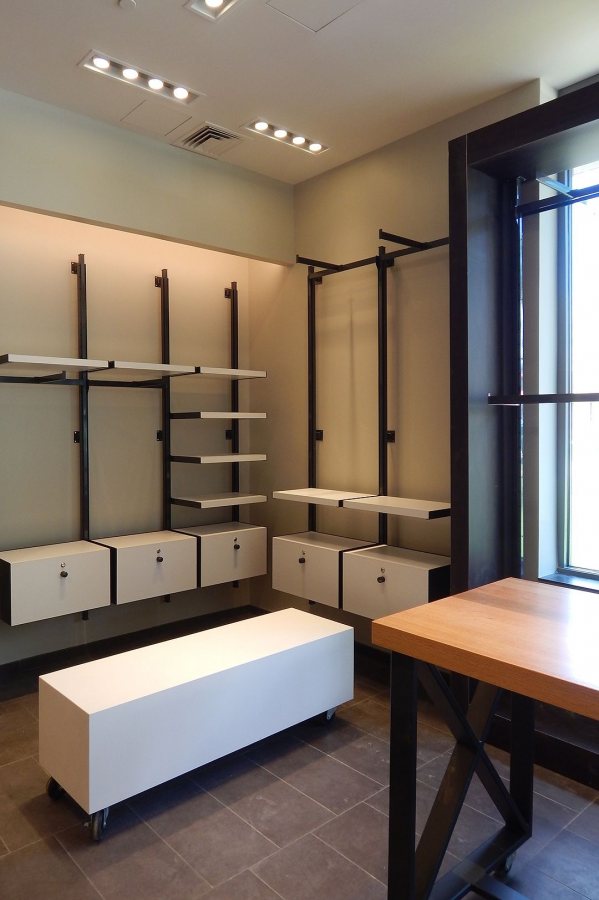 The future location of the College Store, shown on June 30, 2016. (Doug Hubley/Bates College)

Formerly known as Office Services, Post & Print will begin its three-day move from Lane Hall to 65 Campus on July 22. (Campus Construction Update will cover that move in a forthcoming column.)

A tour of 65 Campus in late June revealed a College Store already looking a lot like itself — a thicket of stylish new shelves, tables, clothing racks, display cases and panels, and other furnishings eagerly awaiting merchandise.

The displays are a mixture of snazzy black and white pre-fab units and built-in items, primarily in the red oak that is a decorative motif in both new residences, made to order by Windham Millwork of Windham, Maine.

College Store staff have been preparing for the move for months. One objective has been simply to minimize the amount of merchandise that will need to be packed, transported, and displayed in the new space.

Among other measures, the store has deferred restocking some items, explained Gail St. Pierre, who succeeded Sarah Potter ’77 as store director in February. A sale taking place through July 15 will further lighten the load.

Blanchette Moving & Storage of Lewiston will do the heavy lifting the week of the 18th. Blanchette is a familiar presence on campus — especially this year, as renovations of Smith and Adams halls, as well as other spaces, have dislocated a lot of furniture. (The firm will move Post & Print, too.)

Blanchette, said St. Pierre, will “aid us in packing totes, transporting all of our products across the street, unloading, and possibly aiding us in setting up the sales floor as well.

“It’s a really big undertaking, so it’s great to have those extra hands.” How big? In conjunction with an inventory conducted in late June, St. Pierre and staff got a start on packing up office supplies and art supplies. Just the art supplies, she estimated, filled 20 totes, i.e., plastic packing cases. 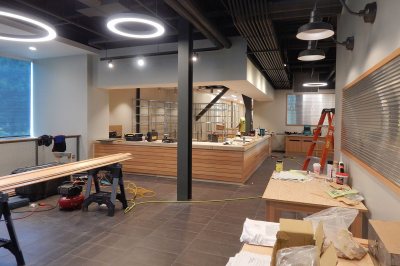 The Post & Print center, at 65 Campus Ave., shown on June 30, 2016. The wood on the sawhorses at left and the service counter at the rear is red oak, a decorative element much in evidence at 55 and 65 Campus. (Doug Hubley/Bates College)

St. Pierre noted that the loading dock and receiving area at No. 65 represent a great leap forward in stocking the store. Until now, bringing in deliveries from the old loading dock, opposite Muskie Archives, has meant trekking through the labyrinth that is Chase Hall and then — because the store is in the basement — wrangling boxes of books, glassware, captain’s chairs, etc., down a flight of stairs or into a dumbwaiter.

And of course, St. Pierre added, the College Store staff will appreciate being able to spend much more time above ground in glassy No. 65. “The daylight will be lovely.”

But the move will not conclude one of the busiest periods in the College Store’s history. After the opening in 65 Campus, St. Pierre said, “we’ll start receiving for back to school, then we’ll have our fall back-to-school textbook rush, then we’re going to get ready for Back to Bates,” the combined Homecoming and Parents & Family Weekend festivity taking place Oct. 7–9.

“It’ll just keep going and going, which is exciting,” she said. “Perhaps there’ll be a day in October when we’ll take a breath.”

Our June 30 tour revealed Windham Millwork craftsmen installing such features as a long counter for preparing shipments — features that, as Streifel explained, would be Windham Millwork’s last work on the project. 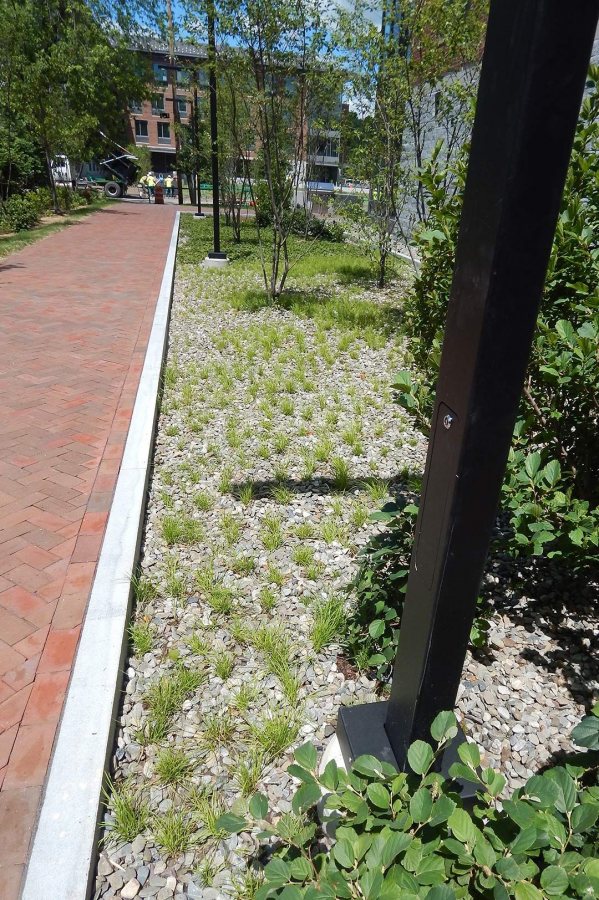 Sedge and barren strawberry are among the plants growing in a rain garden at 65 Campus Ave. (Doug Hubley/Bates College)

In short, the construction work on 55 and 65 Campus Ave. is winding down.

The close-inspection process known as punch-listing “is essentially done” in both buildings, Streifel says. “Some final walk-throughs will need to take place.”

At No. 55, commissioning — the testing of building systems such as electrical, plumbing, temperature control, etc. — is nearly finished. Incorporating both heating and cooling in the same system, temperature control is the last to be tested. “What they’re doing now is chasing down some loose ends on the heating before they flip it over to the cooling system,” Streifel explains.

What else? Washers and driers for the residence laundries are scheduled to appear during the week of July 11, with vending machines to follow soon thereafter. Office furniture, from Boston-based Red Thread Spaces, will also come in mid-to-late July. 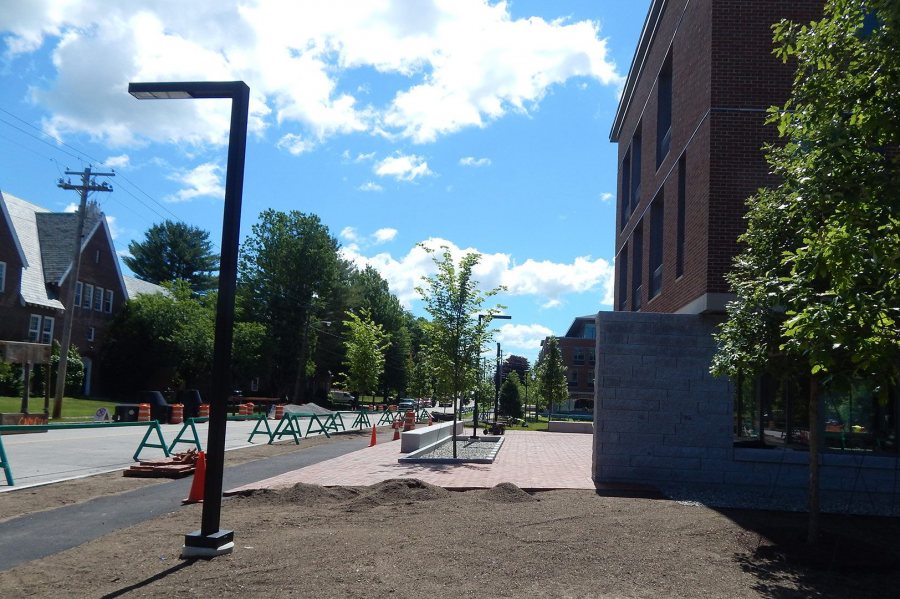 More to the point, perhaps, hundreds of pieces of furniture for the students’ rooms will arrive in August — the last furniture to be moved in. Streifel placed the order in April with a custom fabricator, New England Woodcraft of Forest Dale, Vt., which has worked with Bates in the past.

The dorms will sleep a total of 243 students, but allowing for spare pieces (and easier arithmetic), there will be 250 units each of a three-part bed, a table, a chair, and a two-module dresser set that can be stacked or placed side by side under a bed. So 1,000 units, not accounting for the multiple bed parts, etc.

And that’s why it’s the last furniture to be delivered: There’s simply too much of it to try to coordinate with other logistical operations.

Can we talk? Campus Construction Update welcomes your questions and comments about current, past, and future construction at Bates. Write to dhubley@bates.edu, putting “Campus Construction” or “Can you shim up the roadway like your sister Kate?” in the subject line. Or use the 21st-century commenting system below. 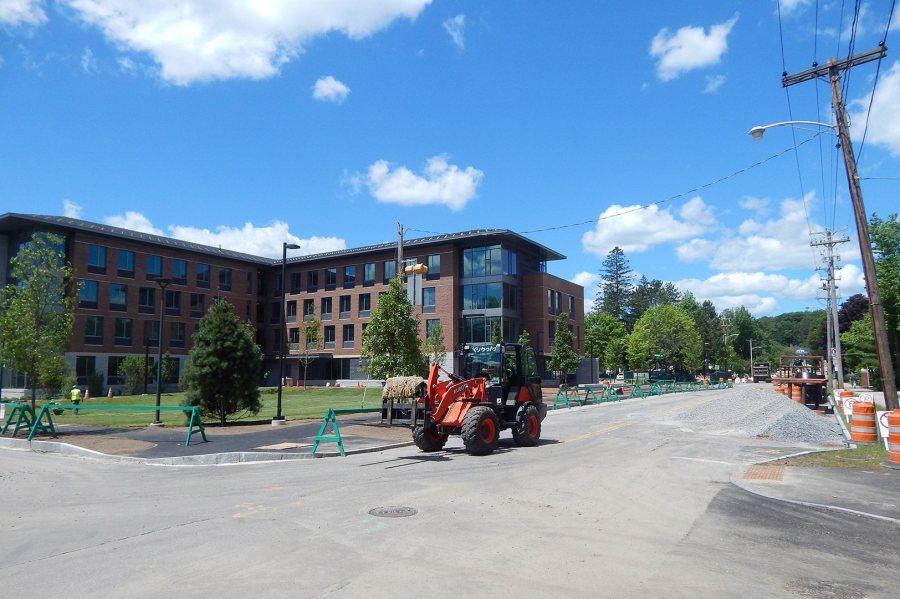 At rear, recent landscaping is evident at 55 Campus Ave. on June 30, 2016. The loader at center is carrying strips of turf. Campus Avenue is closed for sewer replacement. (Doug Hubley/Bates College)