Share on EmailShare on FacebookShare on TwitterShare on LinkedIn
paused 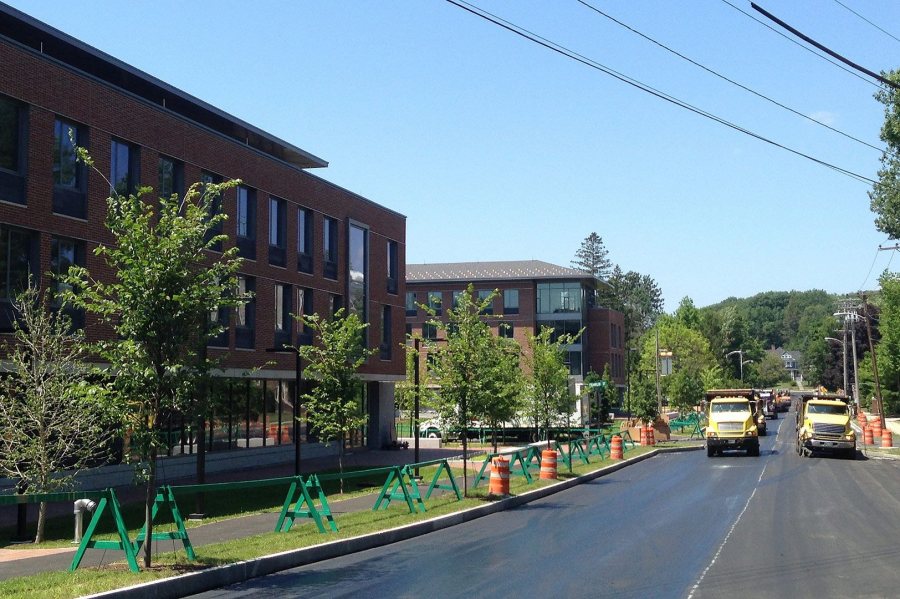 Tear Down These A-frame Barriers! July has been a thrill ride in the progress of Bates College’s new student residences, but a recent development gave us a particular tingle.

Sometime between late afternoon on July 29 and the morning of Aug. 1, project management firm Consigli Construction removed the green A-frame barriers, resembling sawhorses, that had surrounded the 55 and 65 Campus Ave. construction sites since April. 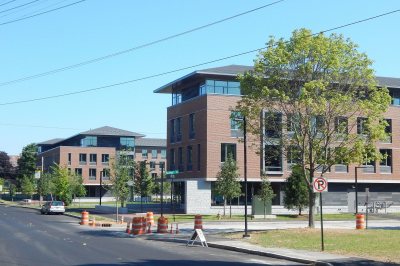 The green A-frame barriers around 65 and 55 Campus Ave. are just a memory. Now if we could only lose the orange barrels. (Doug Hubley/Bates College)

The removal ended two years of enclosure for those two Bates blocks. It also cleared the way for Campus Construction Update to photograph the buildings as they will appear henceforth (or at least until snow banks block the view again).

What was even better was the fact that civilians could once again — did we mention it’s been two years? — stroll the sidewalks on the south side of Campus Ave.

In short, the sites were no longer construction zones. This milestone was affirmed back on July 19, when Bates, Consigli, and project designer Ann Beha Architects finalized the Certificate of Substantial Completion for the project.

Attaining substantial completion transferred legal control of the buildings from Consigli to Bates. This would seem to justify a brief champagne break. But instead it uncorked a whole lot more work for Bates folks, as the college moved two major campus offices into 65 Campus Ave. and oversaw three waves of furniture deliveries to both buildings — the latest on Aug. 2, when the mattresses arrived.

Up until substantial completion, “it was Consigli’s site, and Consigli’s work that we were overseeing,” explains Bates project manager Chris Streifel. “Once the buildings became ours and we started moving things in, those were all our players and they required our management.”

All of which, of course, is just a preface to the milestone of milestones: student occupancy. This begins Aug. 19 with the arrival of students who have summered on campus, conducting research with professors or working other Bates jobs. 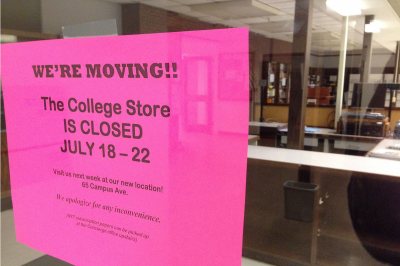 Now closed and all but empty of merchandise, the old College Store, in the basement of Chase Hall, is shown on Aug. 3, 2016. (Doug Hubley/Bates College)

Getting back to those office moves, the College Store closed on July 18 for its shift from Chase Hall to 65 Campus, and Post & Print (formerly Office Services) started its move four days later.

“We really pushed the envelope to get the store and Post & Print in there as early as we could, to give them as much time as possible to work out all the kinks” before the start of school,” says Streifel.

“Consigli worked with us and accommodated us, and did everything they could to make it happen.”

The moves went well, but not flawlessly. In a non-Bates project, crews hired by the city of Lewiston were grinding pavement off Campus Avenue just in time for the moves. It was work the Bates team had planned for, but having to detour via Central Avenue certainly didn’t help.

In addition, countertops for the cash wrap stations in the store weren’t ready. And the final tests of the building systems, aka commissioning, had revealed that the chilled-water feed for the College Store air conditioning needed to be modified.

“That delayed the startup of air conditioning in there, so that the first day the retail team had to move in, unfortunately, it was very hot,” Streifel says.

Still and all, “I really think that we were successful,” he says. “The moving team did a great job of planning and keeping it as organized as it could be.” 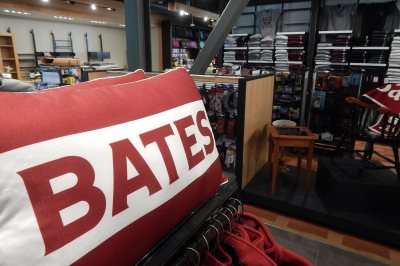 Centrally located on the first floor of 65 Campus, the College Store held its soft opening on July 25 as planned (with President Clayton Spencer among the first customers). Post & Print, which has spaces on the first floor near the store and in the basement, opened its doors later that week.

The College Store had the greatest volume of stuff to move, but P&P had the heaviest individual items. According to director Laurie Henderson, the 20 major pieces of technology on the manifest included a Xerox J75 color digital press, a Konica high-speed black and white printer, and a new hydraulic cutter that weighs half a ton, was installed by Cote Rigging of Auburn, and replaced P&P’s obsolete 30-year-old hydraulic cutter.

Also: a folder-inserter and an off-line folder, an addresser, a strapper, a sealer, and a wide-format printer that’s used to produce, among other things, student research posters for presentations like the Mount David Summit.

Printing is near and dear to our hearts, but the biggest news to come out of P&P’s move is on the mailing and shipping front, as the new Post & Print will enable students to receive packages and mail at a single point and in a single transaction.

The move consolidated P&P operations to one location, 65 Campus, from three: its labyrinthine basement quarters in Lane Hall and two spaces in Chase Hall, the Package Center and the student mailboxes (whose imminent demise has made the national news). 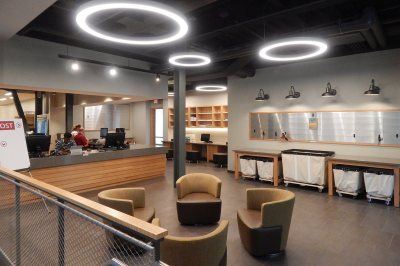 This seating area is part of the Post & Print mailing and shipping center. The printing office is downstairs. (Doug Hubley/Bates College)

Previously, Henderson explains, a student receiving a package would be notified via email, retrieve a package slip from their Chase Hall mailbox, and actually pick up the package at the Package Center. “And if it was a jacket that didn’t fit, they had to go to Lane Hall to ship the package back.”

At the new P&P, getting the goods is a one-stop proposition. “Whether it’s mail, flowers, packages — students will receive an email notification,” says Henderson. “They can simply swipe their ID at the counter. That’ll give us a ticket of items for pickup, and we’ll just pick them” from P&P’s new expanses of bucket and shelf storage.

“They can open their package here and try on the jacket, and if it doesn’t fit, they can go right to the other counter, print out a return label if isn’t already included, put it on the package and return it — done, gone.”

For P&P staff, meanwhile, the new quarters come with marked advantages over the old. Air conditioning is a big gain for the print operation because muggy conditions cause paper to jam in printers and other equipment to be finicky.

Henderson adds, “It’s great to have all our staff together in one location.”

Both P&P and the store will benefit from improved public visibility in the new location. Henderson says that students sometimes got through two or three years at Bates without ever learning that Office Services was in the basement of Lane. (Those were the lucky students who actually went to a store and tried on the jackets that they bought.) 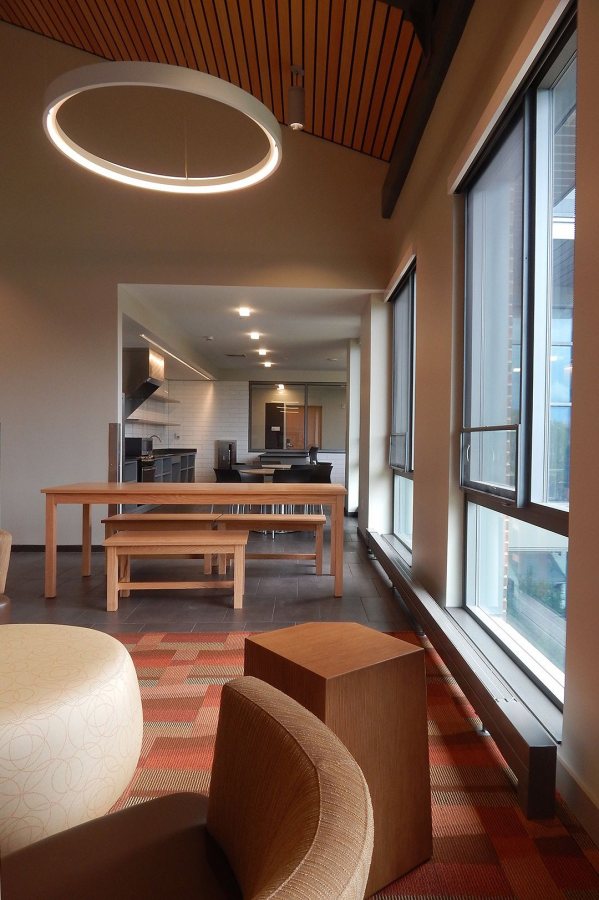 A view into the 65 Campus kitchen from the Treehouse. (Doug Hubley/Bates College)

And the Days Dwindle Down: Consigli’s portable field office will likely be yanked out of its little patch of woods on Bardwell Street and trucked away by mid-August, but the company will have a presence at Bates for months to come.

Consigli is still supervising subcontractors as they fix problems identified during punch listing and commissioning — although by this point, Streifel says, that work “is pretty sparse.”

But there remain countless administrative details to deal with. “Even though the buildings are basically done and they look ready,” Streifel says, “there’s a tremendous amount of closeout work, as we call it, that has to be done. That will probably stretch well into the fall.”

“Right now it’s significant, but six or eight weeks down the road, it’ll start to be a little bit more manageable. There’s a lot of boxes to check, a lot of lists to manage, a lot of documentation to be developed.

“I don’t feel like we’re at the end at all. I know we’ve reached some significant milestones, but there’s a lot to do to make sure it’s closed out cleanly.”

So closing-out is one definition of “done” for this phase of the Campus Life Project. Then there’s “done” in the emotional sense — a feeling foreshadowed the first time we strolled the new Campus Avenue sidewalk on our noontime meander.

For Streifel, what will be the emotional “done”? He says, “When the students start to move in, that’s when it’s really done, as done as done can be.”

Can we talk? Campus Construction Update welcomes your questions and comments about current, past, and future construction at Bates. Write to dhubley@bates.edu, putting “Campus Construction” or “I liked the green A-frame barriers” in the subject line. Or use the 21st-century commenting system below. 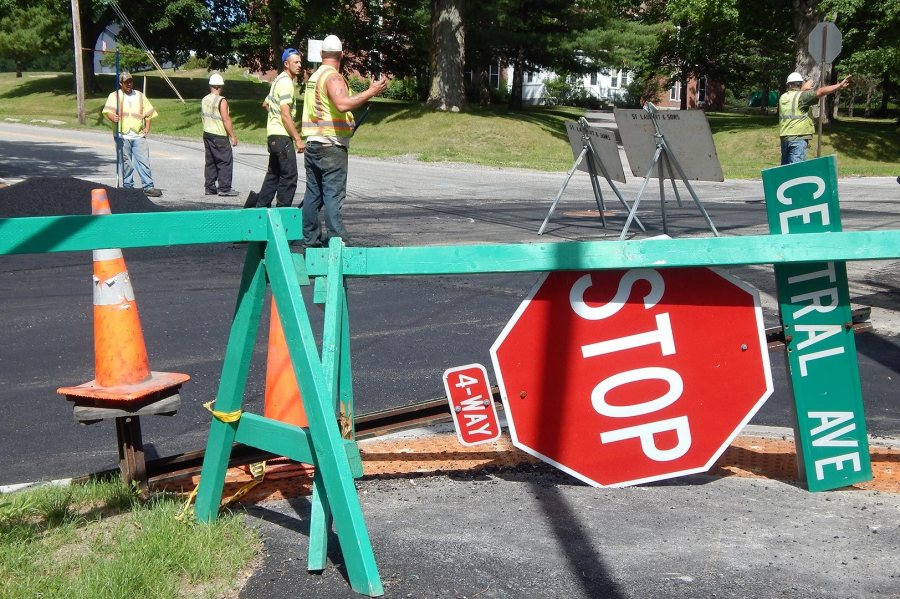 A paving crew from St. Laurent and Sons Excavation interacts with traffic and each other at the intersection of Campus and Central avenues on July 19, 2016. (Doug Hubley/Bates College)