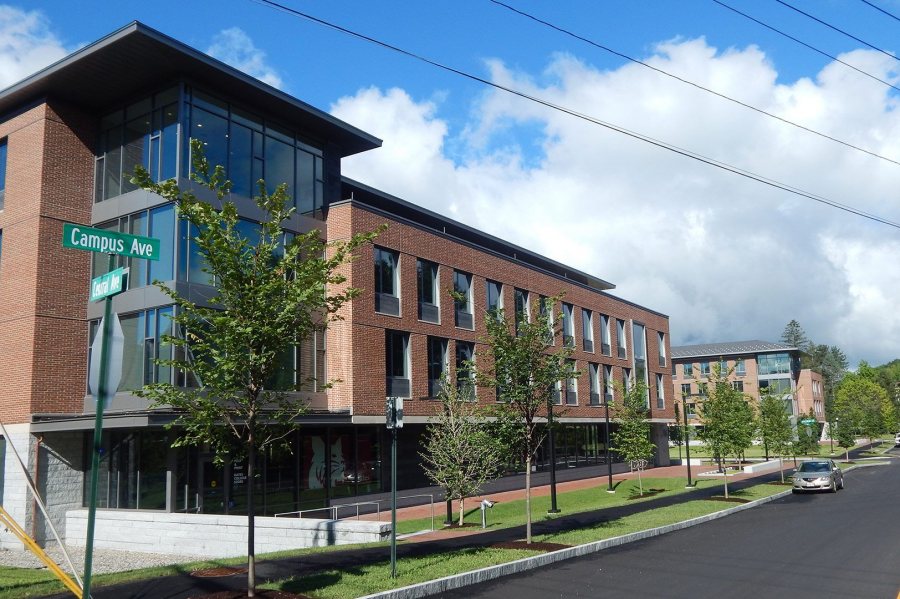 Almost three years after the Campus Avenue residence project was announced, and two years after construction began, the new dorms at Nos. 55 and 65 Campus Ave. are beginning to fulfill their primary purpose. 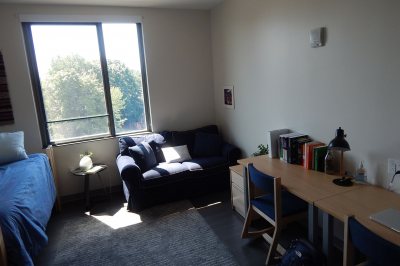 Since Aug. 19, some two dozen students have moved into the dorms, anticipating the rush of occupants that will start with the arrival of the first-years on Aug. 29.

Yet building work goes on. And the biggest news surrounds Bates’ collaboration with a community partner to create interior artwork for the dorms.

Museum L-A explores the history of work, industry, and community in the Twin Cities. Housed in a Lewiston mill building where the Bates Manufacturing Co. once wove bedspreads and other cloth goods for the nation, the museum collects artifacts from the region’s textile industry. (The name’s no coincidence: Industrialist Benjamin Bates founded the textile mill and provided early financial support for the college.)

The college and the museum are longtime collaborators on community-engaged learning programs, art exhibitions, performances, and other initiatives. And the project team for the Campus Avenue dorms approached the museum last spring in search of materials that might inspire wall art for Nos. 55 and 65. 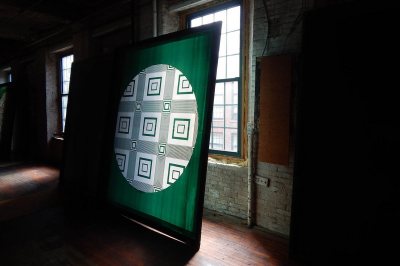 “We wanted to make a connection with the local community,” says Chris Streifel, Bates project manager for the dorms. “We wanted to draw in Lewiston history if we could — we just didn’t know how we wanted to do it.”

The “aha!” moment came during a tour of the museum when the Bates group happened upon a collection of about 200 large silkscreens used to print bedspreads and tablecloths in the 1940s and ’50s.

The collection is the result of a major rescue and preservation effort by the museum: The screens “were scattered everywhere, and we had finally gotten them all in one section of the mill,” says museum director Rachel Desgrosseilliers. Working with Robert Caron, museum project coordinator, Bates student Anna Williams ’16 had helped organize the silkscreens as a member of the Harward Center’s Short Term Action/Research Team.

“We’ve been saying for many years that these would make beautiful artwork of some kind,” Desgrosseilier says. 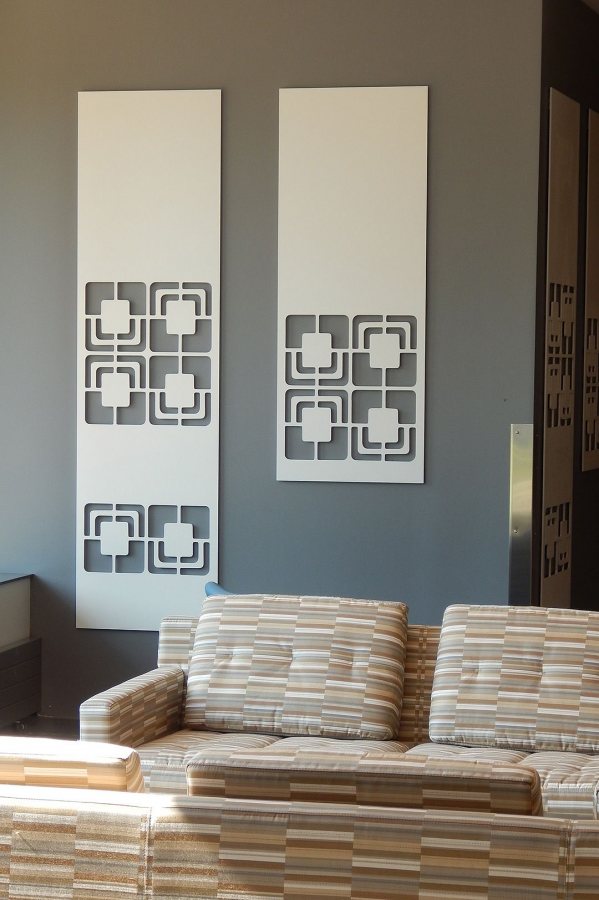 Aluminum wall pieces, created in collaboration with Museum L-A from a vintage textile silkscreen, in the lobby of 55 Campus Ave. (Doug Hubley/Bates College)

When the Bates contingent encountered the screens, “there was immediate interest,” says Streifel. “You could feel the history to it. You could almost see those things racked somewhere in that huge space and getting pulled” for use on the manufacturing line.

“I was struck by the beauty of it and by the connection, just trying to imagine those mills humming along with so many thousands of people every day.” He adds, “And the craftsmanship that went into creating them — when you get up close, you can see the human element, somebody scratching out this pattern by hand.”

To design the wall art, Bates turned to Bergmeyer Associates, the Boston firm that designed the College Store’s new space in 65 Campus Ave. After silkscreen patterns were selected for possible adaptation, Will Ash, academic technology consultant in Bates’ Imaging and Computing Center, photographed them.

He then subjected the high-resolution images to a process called vectoring, which permits them to be reproduced at any size with no loss of image quality.

Bergmeyer selected sections of each screen for the art, ultimately drawing from seven patterns. They designed three treatments:

•    aluminum wall panels where the pattern has been made by cutting metal out of the panel;
•    digital printouts on vinyl mounted on Komacel backing boards for use on walls;
•    and etch film applied to the glass walls of study lounges.

For a given space, the same pattern is used for both the wall panel and the etch film. The metal pieces are hung in groupings in the kitchen of 55 Campus, and in the lobbies of 55 and 65 — and the 65 Campus Ave. lobby is open to the public, if you’d like to see a sample for yourself. 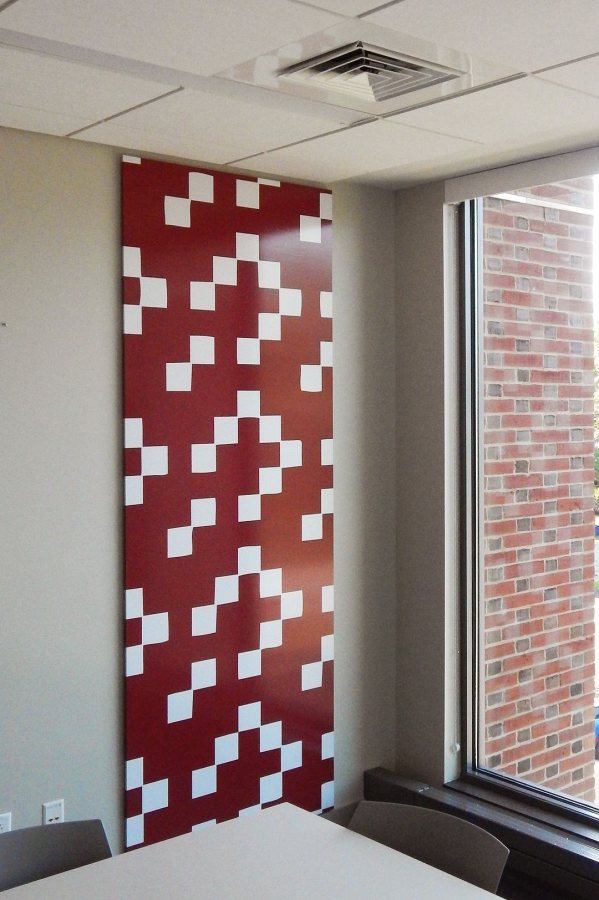 This wall piece, created in collaboration with Museum L-A from a vintage textile silkscreen, hangs in a study lounge at 55 Campus Ave. (Doug Hubley/Bates College)

The firm that has done other signage for the buildings, Exposé Signs & Graphics of Hopedale, Mass., fabricated and mounted the artwork.

“I’m ecstatic about what we were able to produce with Museum L-A,” Streifel says. “I think it is a great partnership.”

Museum director Desgrosseilliers agrees. “I was thrilled that Museum L-A is finally able to share the treasures of such great works of art created by our mill workers in the design department,” she says. “What a great win-win situation this is for both organizations.”

All the artwork is in place, but the project’s not quite finished. The museum is developing wall texts for the silkscreen renderings that will not only name the original designs but, in a sequential flow from text to text, relate the story of the silkscreens to Lewiston’s heyday as a center for textile manufacturing.

Those wall plaques will likely be mounted in October.

Batting cleanup: Project manager Tim Schneider and other staff for Consigli Construction, construction management firm for the Campus Avenue dorm project, will remain at Bates for weeks to come, albeit not full-time. But scheduled to leave Bardwell Street today is the portable field office that housed the Consigli team for more than two years. 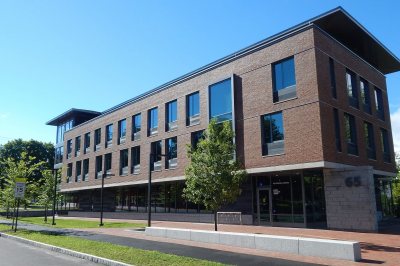 Meanwhile, during our visits to 55 and 65 this week, we saw photographers for project design firm Ann Beha Architects documenting the new buildings. On Thursday, technicians for Exposé were mounting a bold sign for the College Store on the 65 Campus Ave. canopy near Central Avenue. 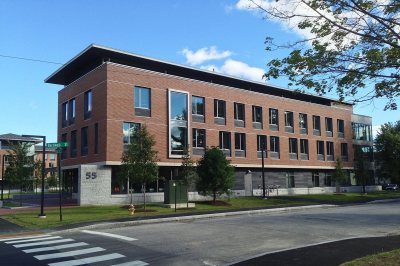 We talked to Matt Phillips ’17, who just moved into a sunny fourth-floor room in 55. He had spent the summer doing an internship in Lewiston, living on campus, and being tantalized by the new building.

“It’s looked like the dorms have been pretty much finished for most of the summer, though they’ve been working on the finishing touches,” says Phillips, a residence coordinator team leader for the Bates housing program. “So I was getting really excited to move in. And it was nice to finally do that.”

The payoff was worth the wait. “I was in Leadbetter House last year, which was one of the oldest dorms on Campus,” Phillips says. “So it was really exciting to be in a brand-new space this year.” (Leadbetter and its companions on Wood Street, Howard and Davis houses, were taken down in August.)

Katherina Tran ’19 of Boston just moved into 65 Campus, where she looks forward to mentoring first-years as a junior advisor. She’s excited about the expanse of chalkboard paint applied next to every student’s door. Despite technology, she says, “it’s still nice to leave a handwritten note.” 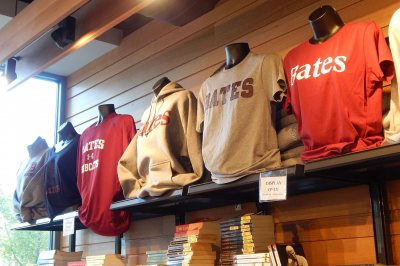 Even though occupancy is underway, there are still a few outstanding repairs from the punch-list inspection left to do, Streifel says — mainly items that, for whatever reason, couldn’t be fixed when they were discovered.

And what’s ahead? He anticipates that the dorms will pretty much require his full attention through September, as the occupants “load-test” the buildings. In addition, “there are a lot of close-out and final processes that we need to go through with the architect and Consigli to conclude the project formally.

“And then there’s really a full-year process as we transition away from warranties and contractor support to fully Bates-owned processes.”

So Streifel will be immersed in the Campus Avenue dorm project for some time to come — but it’s not too soon to ask how he feels about this endeavor that has occupied virtually all of his workdays since November 2013.

“It was a wonderful opportunity. The feedback, the looks on people’s faces as they look around, and just knowing how these buildings transform that area of campus — and, to a degree, the college itself. 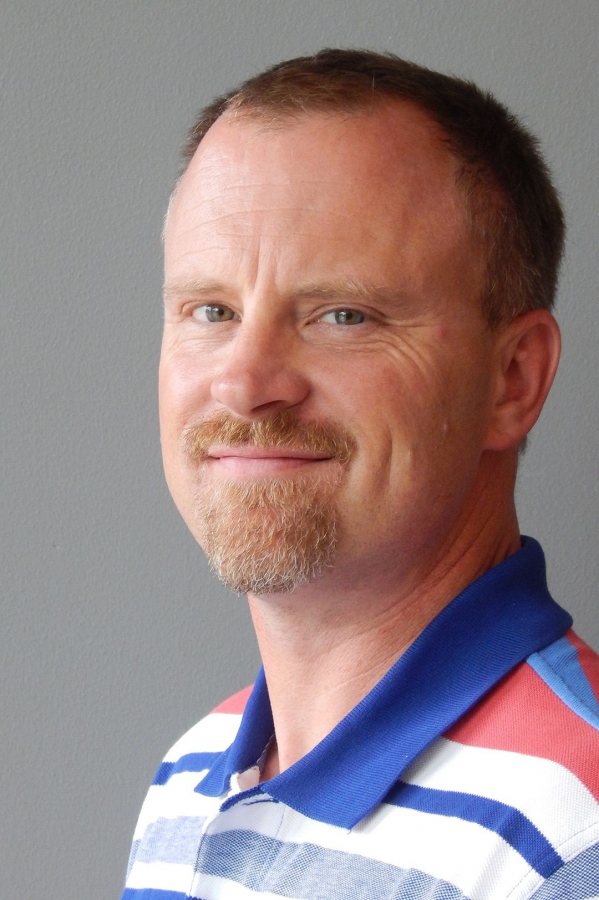 “It’s a tremendous new asset that we have, and I couldn’t be happier with how the project has come out and how the team performed.”

Campus Construction Update returns on Sept. 2 with final reports on the other three projects we have followed during 2016 — Smith and Wentworth Adams dorm renovations, the Campus Avenue Field resurfacing, and the college’s new boathouse.

Can we talk? Campus Construction Update welcomes your questions and comments about current, past, future, and fictitious construction at Bates: Write to dhubley@bates.edu, putting “Campus Construction” or “Could you report on my new garage?” in the subject line. Or use the 21st-century commenting system below. 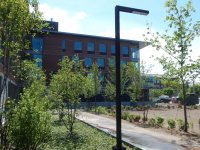