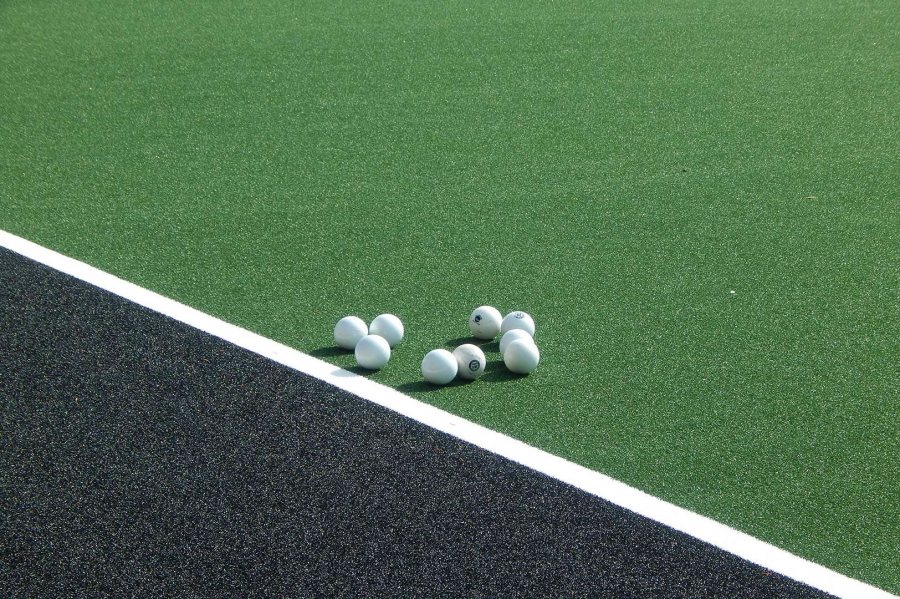 We’ve been together 18 months, but now our time’s running out.

Our hearts are heavy. It’s hard not to regret the places we never saw together, the experiences we never had, the pleasures left untried. The things we wanted to tell you about, but couldn’t.

Such as the conversion of Carnegie 225 from tiered to level seating. The new steam pipe between Chase Hall and the Muskie Archives. And the new windows on Chase — 100 new energy-efficient windows. 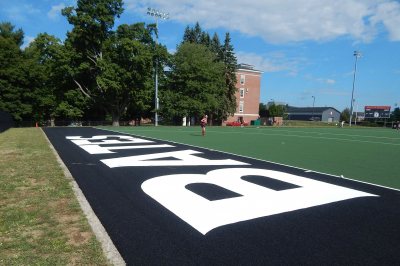 There’s no doubt whose this new turf this is. (Doug Hubley/Bates College)

Since March 2014, it has been our pleasure to give you the news of major facilities improvements at Bates. But with the new Campus Avenue dorms open and the summer’s three remaining projects virtually complete, it’s time for Campus Construction Update to end this series and return to honest — er, other communications work.

Yet we still have a few intimacies to share with you before we pack up the 8-foot ladder, leave our hard hat and orange safety vest rolled up and stashed behind your couch, and call it a day.

On Wednesday, Aug. 31, the Bates field hockey team held its first practice on a newly resurfaced Campus Avenue Field. In fact, it was the first practice in North America for any team on this specific configuration of GreenFields TX turf.

While this acclaimed turf by the Dutch manufacturer GreenFields is in use elsewhere on the continent, Bates’ Campus Avenue Field is the only installation employing the proprietary TenCate Ecocept elastic layer — the shock-absorbing layer that underlies the faux grass. 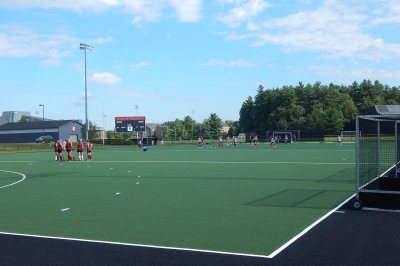 “It’s a very nice turf in terms of playability and bounce and speed,” she says. “And it’s a very fast turf. That’s going to be really useful when we go play on slower turfs, because we’ll be used to performing fast.”

The TX is also, simply, a consistent surface. It will enable the team to focus exclusively on playing without the distractions from the worn-out AstroTurf that it replaced.

The old turf’s irrigation system — field hockey is played on wet turf — left puddles that would stop the ball dead. There were frayed spots and other irregularities in the playing surface that sent balls flying wildly and tripped players. (The Bobcat emblem in the middle was a particular tripping hazard.)

Most important, Ryder explains, the GreenFields is “physically a lot more forgiving to the players’ bodies. The old turf was really hard to play on.”

The last major task at Campus Avenue Field was completed early this week: fastening the grassy layer in place. This was done by securing the edge of that carpet into a channel cut into a concrete anchor wall that surrounds the field and whose top is flush with ground level. 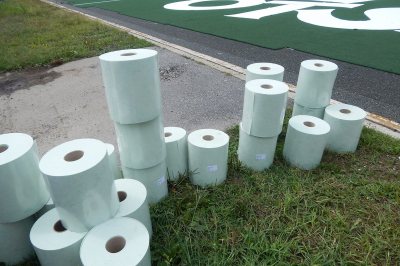 Panels of the GreenFields TX turf were still being placed on Aug. 17, 2016. Slathered with glue, this tape was used to hold the panels together. (Doug Hubley/Bates College)

Other than that, the finishing touches were cosmetic — touchups to markings on and around the field. Ryder points out an interesting distinction among the markings: Curved lines, like the shooting circle, are painted on, and straight-line markings are inset and glued into the surface.

That’s because curved seams don’t hold up as well as straight seams.

The renewed field is a tremendous morale boost. “It’s a huge advantage to have a brand-new facility,” Ryder says. “And it’s definitely a vote of confidence.”

The Bobcats make their competitive debut on the new turf in a game vs. Worcester State at 5 p.m. Sept. 6. 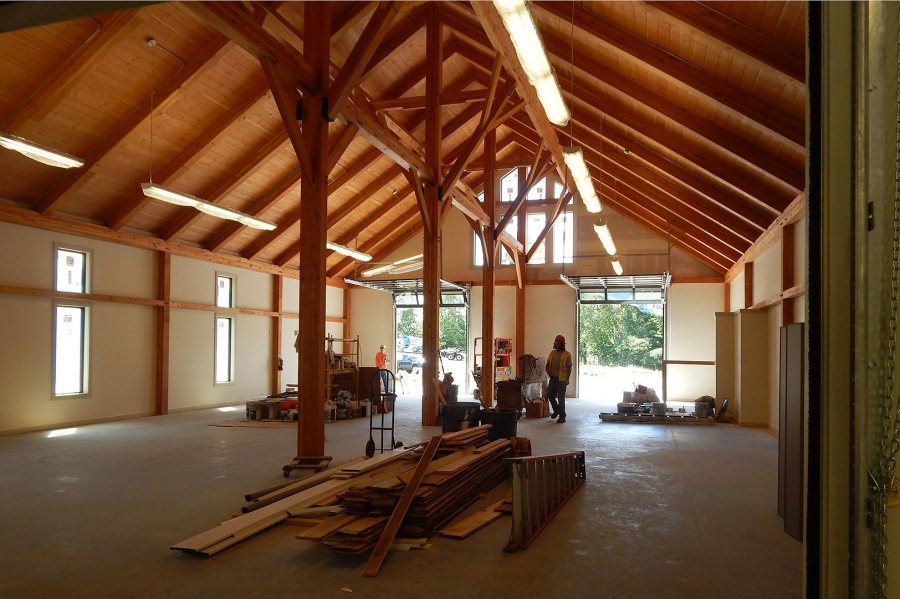 “It’s a cathedral,” says rowing coach Peter Steenstra: The boat storage area in the boathouse. The wood on the floor was recovered from Bates’ old boathouse for decorative use in the new facility. (Doug Hubley/Bates College)

Focused on racks: Bates’ new boathouse will be the last of the college’s big summer facility projects to cross the finish line.

Rowing coach Peter Steenstra reports that the all-important boat storage racks will be installed during the week of Sept. 12. That date falls two days after the teams’ first practice, and a few weeks past the original installation schedule. 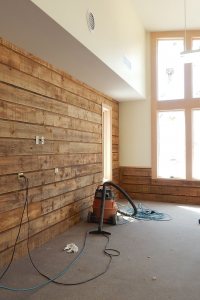 Sideboards from the old boathouse were saved, planed, and resized for reuse in the new boathouse team room, shown here, and in a connecting corridor. (Doug Hubley/Bates College)

But the delay is a good thing. The racks are being custom-made for Bates and their designer-fabricator, Focus Rack Systems of Nashville, Mich., is taking the time it needs to get them right.

The racks are distinctive in one way, and probably unique in a second way. As noted in previous updates, the first distinction lies in a drawer-like action in the supporting arms that allows the boats to slide out and in for easy storage.

The unique feature? Each rack has three arms that support boats: bow, center, and stern. But the Focus rack’s center arm can be moved along the boat’s length. That’s to accommodate different arrangements of the so-called outriggers, gunwale-mounted fittings that support the oarlocks.

Because outrigger placement varies from boat to boat and the boats are racked upside-down, the movable arm will simplify boat storage in tight quarters and reduce the risk of damaging the delicate craft.

“That’s something they’ve never done, so they’re kind of excited about it,” says Steenstra, who worked with Focus proprietor Paul Smith on the innovation. “It’s the first of its kind.”

We dropped by the boathouse site, by the Androscoggin River in the town of Greene, on Aug. 30. Project management firm Consigli Construction still had a field office there, but the construction fence was gone and the landscaping done: paving stones placed in the parking area, trees and bushes planted, grass seed under a blanket of straw panting for rain. 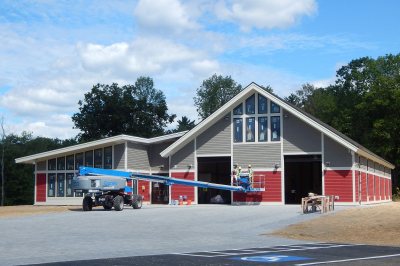 Painters were finishing up the exterior of Bates’ new boathouse on Aug. 30, 2016. (Doug Hubley/Bates College)

Wainscoting and all, the new boathouse is beautiful, says Steenstra. “Particularly the inside, with the main boat bays,” he says, adding with a laugh, “It’s a cathedral.”

To passers-by, the structure sets the right tone. Set in a rolling field a few hundred yards from a working farm, the boathouse fits its rural setting. “When you’re driving by, you’re going to see what looks to be a very large barn,” Steenstra says. “But get a little closer and you start to realize what it is.”

A grand opening for the boathouse is scheduled for Oct. 29. 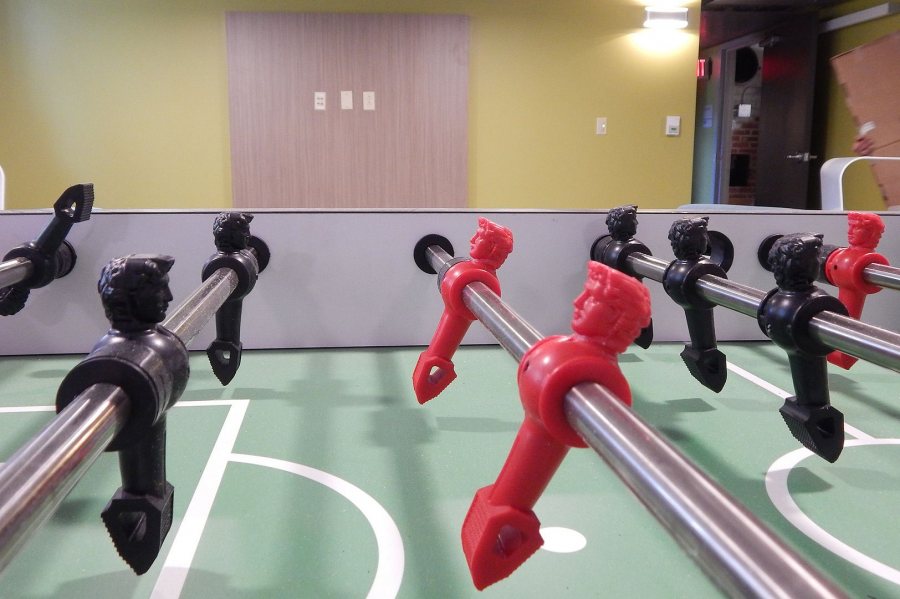 The foosball table is ready for action in a Smith Hall Lounge. (Doug Hubley/Bates College)

Notes from a basement: Back on the sunny shores of Lake Andrews, the first student residents of post-renovation Smith and Wentworth Adams halls have settled in.

Smith will remain mostly empty until the majority of the student body returns to campus this weekend. But 50 or so first-years moved into Adams on Opening Day, Aug. 29, arriving among the 499 members of Bates’ Class of 2020. 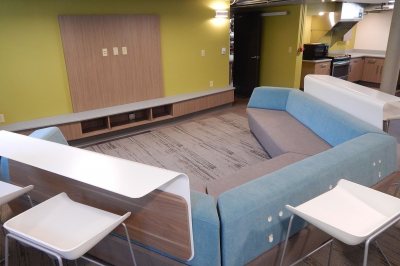 When it’s complete, this sectional lounging unit in Smith Hall’s basement will have counter seating along the backs of each sofa unit. Imagine the fun to be had with spitballs and popcorn during a binge-viewing session of films by Ingmar Bergman! (Doug Hubley/Bates College)

Opening Day came a week after another milestone for the dorms’ renovation: the issuance of the certificate of substantial completion for Smith and Adams by Bates, general contractor Langford & Low, and architect Harriman Associates.

At Smith and Adams as at 55 and 65 Campus Ave., workers continue to make tweaks, repairs, and replacements revealed by the punch-list inspection process.

On Aug. 24, when Campus Construction Update stopped by for a look-see, the new lakeside entrance to Wentworth Adams Hall was all but complete, with access-system work to be done and the ceilings awaiting their full complement of tiles.

Completed tasks at Adams included the creation of a first-year study center in the basement; the upgrade of a first-floor suite now occupied by the residence director; and paint and light fixtures that bring new brilliance to the main corridors of the ground-level and street-level floors. 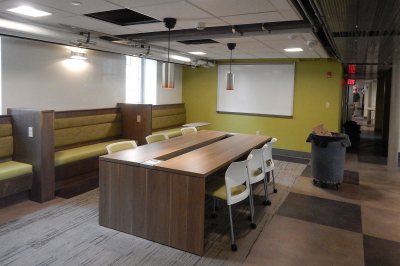 A new study lounge in the renovated basement of Smith Hall. Banquette seating is a design theme in the lounge spaces Bates has created this year. (Doug Hubley/Bates College)

Next door, the transformation of Smith — especially its basement — was striking. The wall colors were on, most furniture in place, and the residence coordinator was already ensconced in her sunny basement abode.

The basement kitchen-lounge was ready for action. The furniture was a mix of formats including mid-sized tables, four-person high-tops with unusual shovel-shaped stools, and, across the aisle in a television lounge, a giant sectional with both sofa and counter seating. It was an elaborate system for lounging.

Down the corridor a large, well-lit study lounge straddled the aisle and, again, was furnished to accommodate all manner of seating preferences — from long banquettes to six-person tables, from paired soft chairs perfect for tête-à-têtes to tall loungers for solo thinkers.

Upstairs in the residential zone, Farnsworth showed off the new shower drains that, for the first time in this venerable building, limit one’s run-off to one’s own stall. (Previously, two stalls shared a drain.)

The individualized shower drains, which required some time to perfect, comprise a trough in each stall equipped with a decorative patterned-metal cover. The stalls are separated by a tiled berm. Hygiene and elegance too. 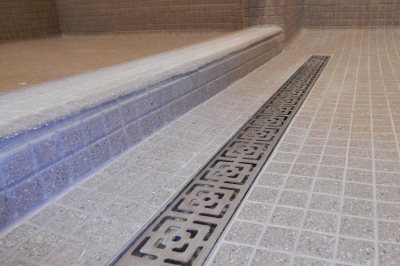 In the new and improved Smith Hall showers, fancy metalwork decorates the drain troughs and a tiled barrier ensures that bathers don’t have to stand in each others’ runoff. (Doug Hubley/Bates College)

Looking at the overall project, Farnsworth had nothing but praise for Langford & Low, calling the Portland-based contractor “awesome.” Deadlines were tight: It was key to get the buildings to the point where the city could issue the certificates of occupancy (a precursor to substantial completion), because otherwise Bates couldn’t use the buildings.

“They understood the goal of having this work done in time for the return of the students — there was no other place for the students to go.”

“We got everything done that needed to be done in time.”

Hey, that’s no way to say goodbye: Campus Construction Update welcomes your questions and comments about current, past, future, desirable, and imaginary construction at Bates. Write to dhubley@bates.edu, putting “Campus Construction” or “Thanks for the memories” in the subject line. Or use the 21st-century commenting system below. 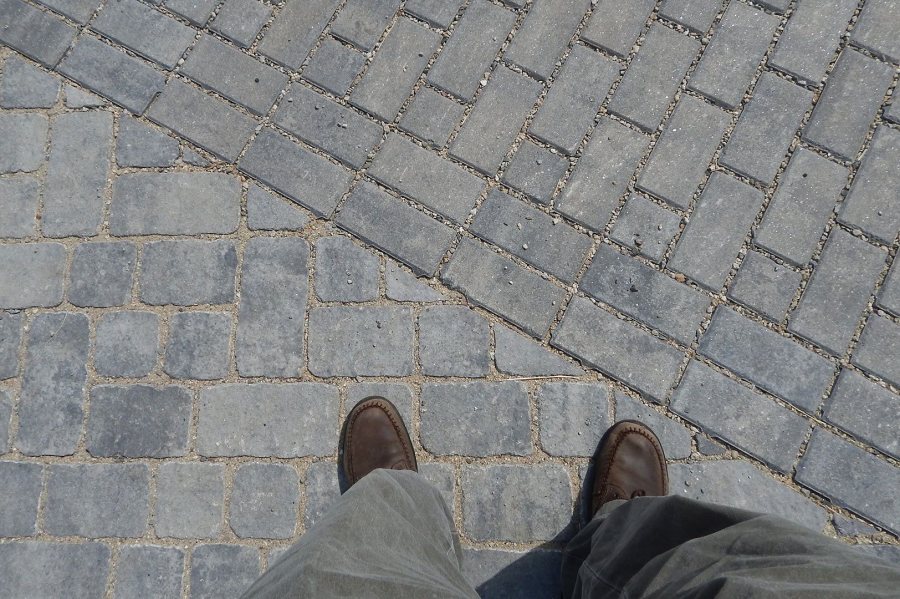