For years, local resident Don Robitaille, 85, has been coming to games in Alumni Gymnasium and leading the crowd in a cheer.

A student who once led the cheer graduated, Robitaille explains during a break in Tuesday night’s women’s game, so he stepped in.

Robitaille went straight to the Navy after high school, and while he didn’t attend Bates he feels a hometown connection. “I’m just a big fan of Bates,” says Robitaille, who retired from the soda vending-machine repair business more than 20 years ago. “For me, it’s a way to do my part for the game.” 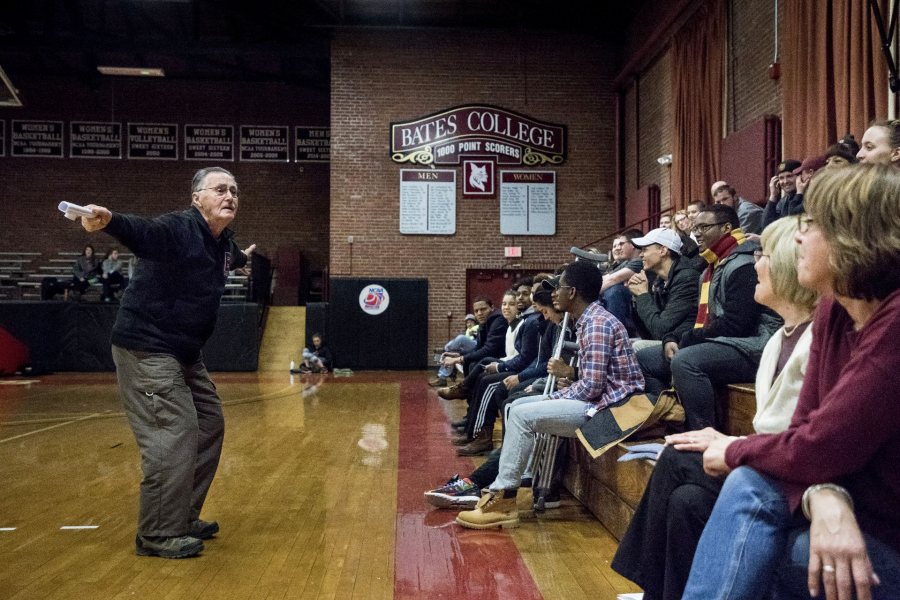 On the court, Jim Coffin has been a college basketball referee for 10 years, and has always enjoyed working in Alumni Gym.

The court surface, he says, has more bounce than most. “We don’t get our feet hurting as much.”

Coffin mentioned another, literal, atmospheric point. “They used to have the heat cranked right up here, and you used to have a huge home court advantage, because everyone would be getting tired in the second half, including the referees.”

Oh, about the game. The women had a resounding 71-42 victory over visiting University of Maine at Farmington, as captain Allie Coppola ’17 of Tarrytown, N.Y., set a record for career rebounds. She wasted no time, collecting seven of her 16 rebounds in the first quarter to solidify her place in Bates history.