Here on campus, we’d see about 15 inches of snow in an average February.

We’re now close to 50 inches, which is more than double the height of your average bobcat. In just the last week, 47 inches have fallen in a one-two-three-four-five punch.

Here’s how much snow each storm dropped:

And here are some scenes and sounds from the week that was as Bates people went about their business.

What did the Floridian say to the Mainers?

The temperature was about 13 degrees and the wind was gusting to 25 mph when we caught up with Kinsey Moser ’18 of Florida, at left, who was walking with Emma Foss ’19 and Adam Poulin ’19 of Maine and Jade Donaldson ’18 of New Jersey.

Which one had a sunny outlook on a snowy day?

Bates is able to clear campus walks and driveways quicker than ever these days. Begun last year, a new approach to moving snow has Facility Services staff from many different departments pitching in to help the 12-person grounds crew. 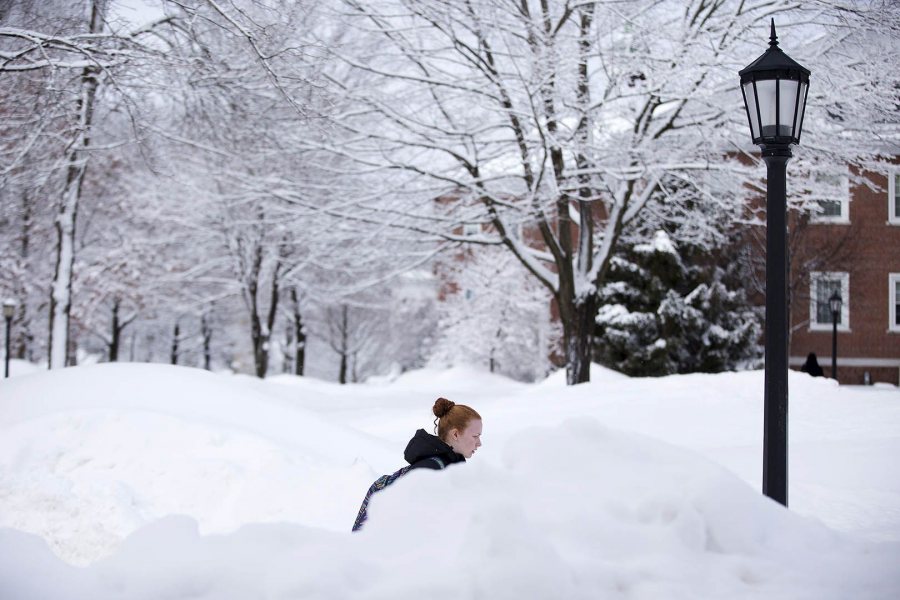 WCSH-TV’s Kristina Rex spent the day at Bates on Monday and joined grounds crew member Tim Kivus on his plowing rounds. “In our eyes, [Bates] really doesn’t shut down,” he said.

Bates did slow a tad during the week, including an afternoon closure of administrative offices on Feb. 9 and a full-day shutdown on Monday. (When offices close, individual professors choose whether to hold their classes or not.)

As nearly 20 inches of snow fell on Monday, Jonathan Lindgren ’20 of Plainville, Conn., still had three classes, including an exam. “I have hard-core teachers who live right down the block,” he told Rex.

A day into the infamous “100-hour storm,” the Lewiston Evening Journal’s banner headline on Feb. 25, 1969, announced 17 inches of snow had fallen. Though the paper’s forecast called for improving weather that day, the storm would continue for another three days.

The storm was so disruptive that on Friday, Feb. 28, Gov. Ken Curtis invoked a never-before-used Maine law and declared that large grocery stores could open on Sunday, March 2. At the time (and until 1990), state law prohibited businesses with more than five employees and 5,000 square feet of retail space to open on Sundays. 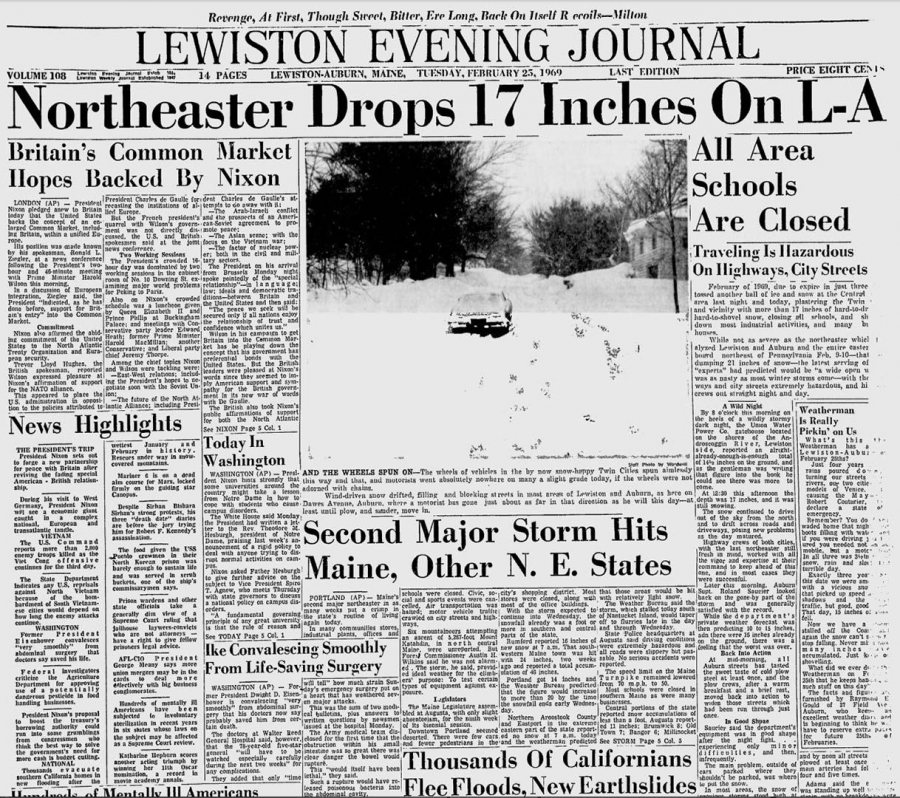 The Lewiston Evening Journal‘s banner headline on Feb. 25 announces 17 inches of snow. But the storm wasn’t over yet.

Get a 360-degree view from atop windy and snowy Mount David and hear the Hathorn Hall bell on Feb. 9.