“It’s always weird,” explains shortstop Asher MacDonald ’18. “I’m from North Carolina, so I’m used to baseball season being green grass and all that.” Now a junior, he’s gotten used to the New England version of spring.

While players on spring teams can practice informally all year, Feb. 15 is when coaches can begin to run the show.

“This is the first day coaches can officially do stuff with us,” says MacDonald as he surveys the scene in the Gray Athletic Building. “It’s a relief to have them hitting us ground balls.”

Winter takes a brief break for MacDonald and his teammates next week when new head coach Jon Martin takes the team to California for games and practices during February break. Presumably they won’t be forced indoors, at least not by snow. 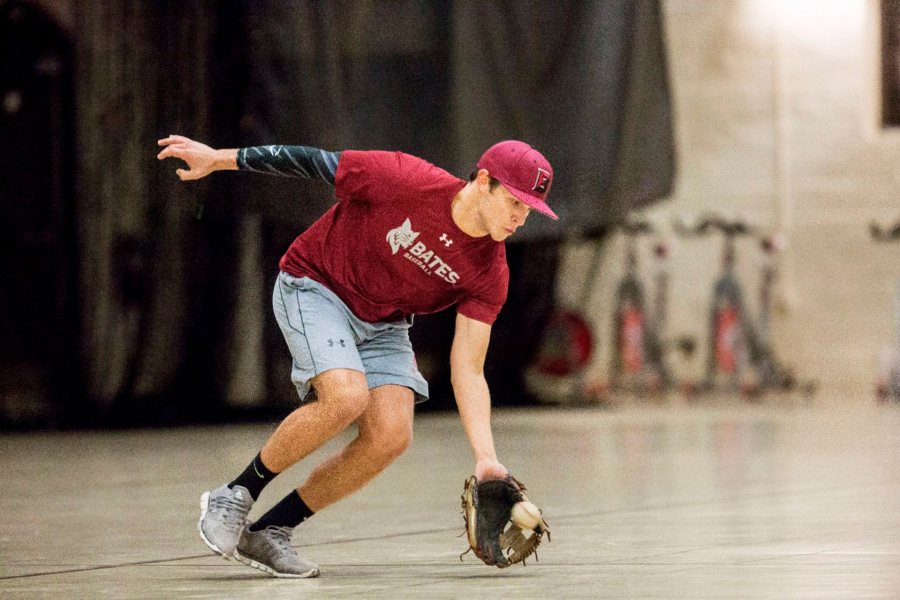 In an open winter, the lacrosse teams would practice outside on Garcelon Field’s FieldTurf surface, which Facility Services keeps clear if the snowfall is modest.

With Garcelon blanketed in nearly two feet of snow, the men and women instead are hard at work in Merrill Gymnasium. As the women finished practice with some four-on-four drills, men’s captain Charlie Fay ’17 of Falmouth, Maine, warms up on a stationary bike.

“We’ve been doing captain’s practices, but to finally be out, wearing the same colors and gear, using our locker room ­­–– it’s nice,” says Fay.

While they appreciate the indoor option for practice, there is no denying their desire to get outside.

“We know the grounds crew does a great job getting that snow cleared for us to get out there,” Fay says. “Then we just gotta hope for a drought, you know?”