On Wednesday night in an Olin Arts Center studio, the only sounds were charcoal on paper and hands sweeping over sketches as local residents joined students for a nude figure drawing session.

Meghan Cleary ’18, an art and visual culture major from South Burlington, Vt., was the model for this session in the weekly Life Drawing series. New to modeling this year, Cleary has already gained a level of comfort. “I was a little nervous the first time, but once you’re up there it’s pretty easy to zone out,” she said. “It’s more like just drawing shapes, rather than seeing a naked person.”

Artist John Bowdren of Pownal, Maine, has been coming to the weekly sessions for over a decade. “A lot of people have been coming for a long time, so it’s nice to catch up and hear what’s going on in the art world locally,” he said. “There’s no teaching, which is nice. People do little critiques but nothing serious, so it’s everyone just doing their thing.” 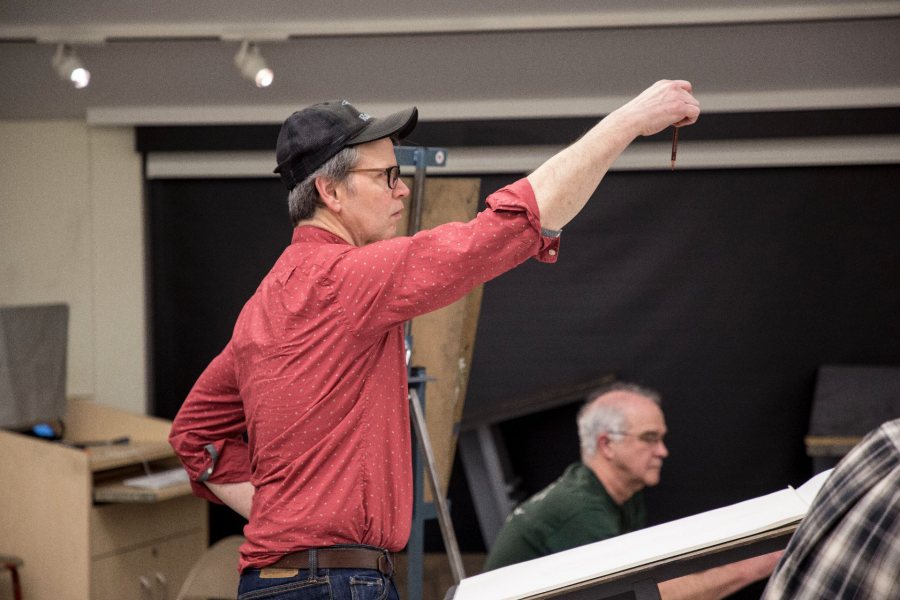 The informal aspect of the drawing session appeals to students like Deshun Peoples ’17. “It’s helpful to have this uninterrupted session of just drawing the figure consistently. It helps a lot in a way that is different than class time,” said Peoples, an art and visual culture major from Chicago.

He also noted the college-community aspect of the sessions. “It gives you a chance to interact with the population, especially artists, which is not something that’s a common occurrence.”