On the evening of Sunday, Aug. 27, as hundreds of first-years eagerly anticipated their arrival at Bates, one Bates senior was preoccupied by thoughts of home.

On campus for training as a residence coordinator at Bates, Danielle Fournier had stayed in close contact with her parents as Hurricane Harvey approached their home in Sugar Land, Texas, near Houston.

When the storm hit, “the water filled our streets almost immediately, to the point that people were paddleboarding, kayaking, and boating down our street, which was an odd phenomenon,” says Fournier. 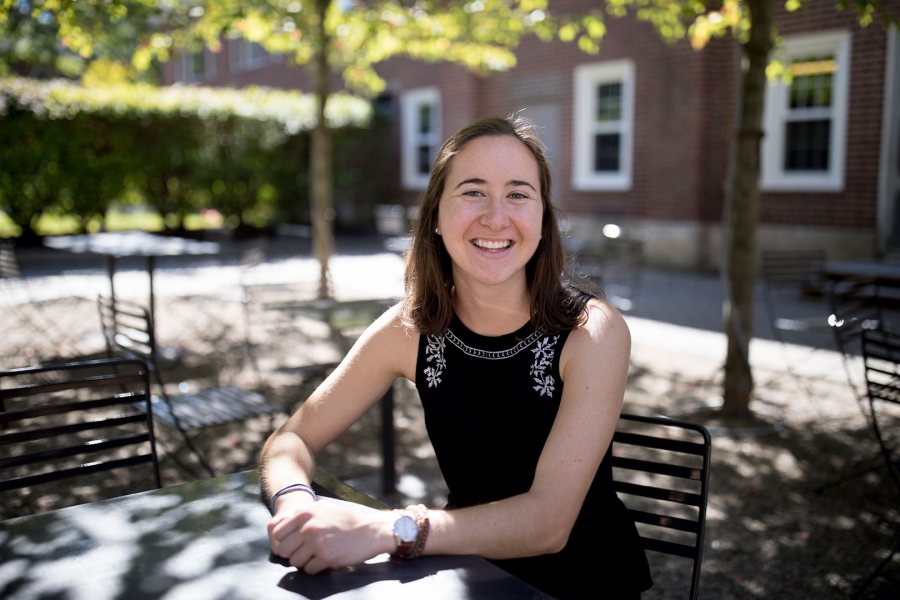 Among the residence coordinators and student affairs staff here on campus, “I was the only one in that group that had strong roots” in the region impacted by Harvey, Danielle says. “And the Bates community reaching out to me and lifting me up was really, really profound.

“Everybody wanted to know how my family was doing and people would ask, and give me space to process some of that,” she continues, “especially in the tense moments when we weren’t really sure what was going to happen. The administration was particularly supportive.”

As it happened, Harvey’s floodwaters rose to mere inches away from the Fourniers’ house — but never got inside. “We had very, very little damage to the house structure as a whole,” says a grateful Fournier.

In addition to a fair amount of stress, Harvey handed Fournier some food for thought vis-à-vis her studies. An economics major, she’s planning her thesis around the aftermath of the 2010 BP oil spill in the Gulf of Mexico, likely with a focus on an intriguing issue: the restoration of trust in the Louisiana oyster fishery following the massive spill.

“The time frame for the reconstruction of an industry is what I’m studying for my thesis, but also something that I’m observing in my city. That parallel has been really interesting,” she says. “How long does it take to rebuild your sense of normalcy?” 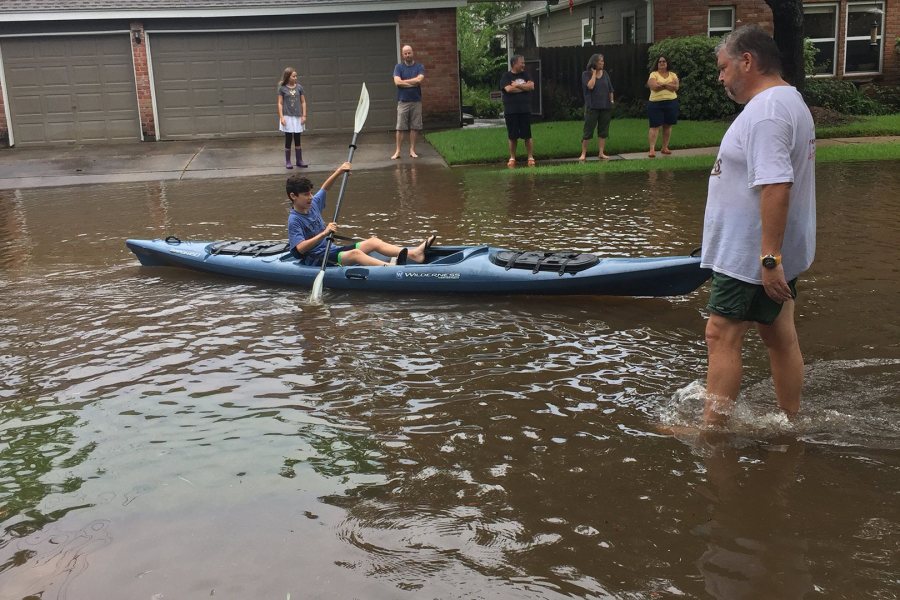 An unidentified kayaker and observers in Danielle Fournier’s neighborhood in Sugar Land, Texas, during Hurricane Harvey on Aug. 27. (Juli Fournier)

While only a handful of Bates students were affected by the back-to-back hurricanes Harvey and Irma, all said they felt the lift of concern and support from the college.

Andrea Russo ’19 of Cheshire, Conn., was participating in a study-abroad program (directed by Heidi Hertler ’89) on one of the Turks and Caicos Islands when Irma cropped up. Forced to evacuate a field station on sparsely populated South Caicos — and with her School for Field Studies program on the island ultimately canceled — she’s back at Bates, living in one of the Campus Avenue dorms and taking courses.

During a tense lead-up to the storm through Labor Day weekend, and fast-paced evacuation planning as Irma approached, “there was always someone from Bates in contact with me,” says Russo, an environmental studies major. 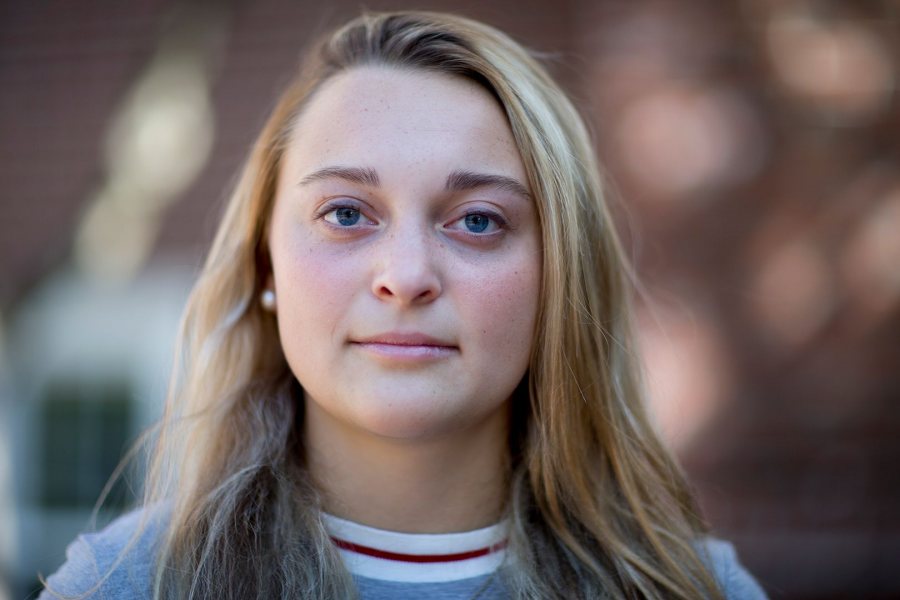 Tina Mangieri, head of the Center for Global Education, “was perfect,” Russo says. “When I started having inklings that something may be going on, I emailed her saying, ‘I don’t know what’s going on, can you please figure it out?’” Mangieri and SFS were in constant contact throughout the situation. “It was amazing.”

The Bates housing office, she adds, found accommodations for her right away. And Mangieri worked with the Registrar so that Russo was able to register for courses within hours of hearing that the SFS program was canceled. After her return, on Sept. 10, her professors made sure she was up to speed on what she’d missed in the first week of classes.

“Even Student Financial Services was aware of my situation long before my father called them and already had a plan in place to handle it,” says Russo. “Overall, everyone at Bates allowed me to make the fastest and smoothest transition possible.”

“Everyone was extremely understanding.”

Along with a few Bates students, at least one Bates faculty member found her plans changed by the storms. Carolina González Valencia, assistant professor of art and visual culture, hosted family who left coastal Florida ahead of Irma under a mandatory evacuation order.

Her mother, stepfather, and brother thought first of going to a shelter, but the stepfather’s health made that idea seem unworkable. Making that decision was the hardest part of the situation. 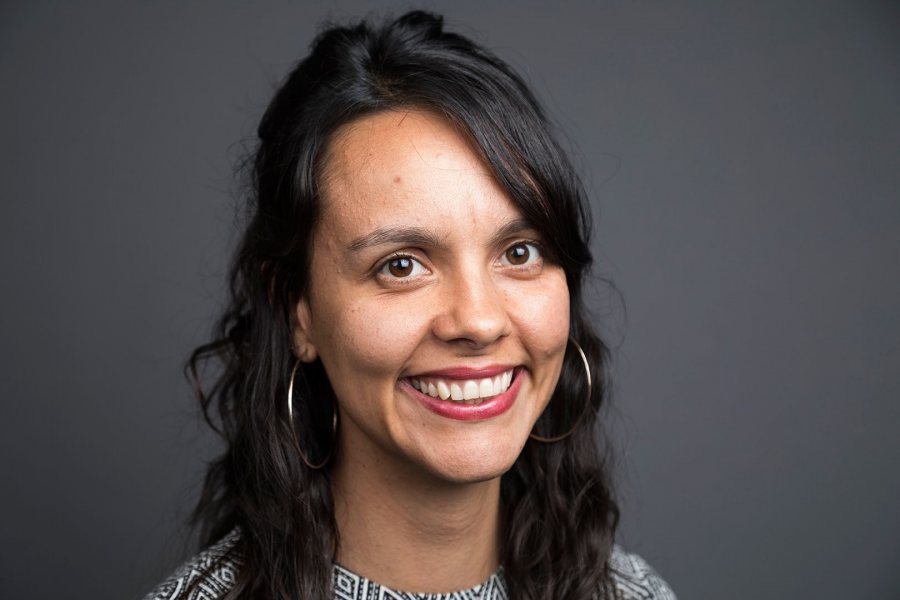 Joining forces with an uncle and a cousin, they started driving toward North Carolina. But storm predictions cast a shadow on that destination, too, and, feeling some panic, the party decided to shelter with family: González, who has an apartment near campus.

Her relatives arrived Sept. 10 after a three-day drive, and headed for home on the 13th, wondering what awaited them. Despite the storm worries, it was a good visit, says González.

The first Maine visit and Eastern Seaboard transit for her uncle and cousin, the trip added “a layer of adventure I think they enjoyed,” says González. Despite their arrival at the busy start of the semester, “it was better to have them here.”