This retirement profile of Professor Emeritus of Psychology and Education Leland Bechtel, who died on Dec. 14, 2017, at age 92, was published in the September 1990 issue of Bates Magazine. Bechtel’s obituary appears in the Lewiston Sun Journal. There will be no service. 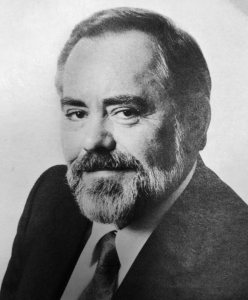 Leland Bechtel made the transition from life as a member of the Bates faculty to retirement at his secluded Maine home last spring. Finishing more than three decades of teaching psychology, Bechtel decided that he was ready to try his hand at other pursuits.

Bechtel was born in Philadelphia and grew up in Pennsylvania. Upon graduating from high school, he entered Eastern Baptist College, where he earned a B.A., and later studied at Eastern Baptist Theological Seminary. From there he went to Temple University, earning a master’s degree. He was awarded his Ph.D. by New York University in June 1963, six years after his appointment at Bates.

President Clayton Spencer announced the death of Leland Bechtel to the campus community on Dec. 19:

I write to share the sad news that Leland P. Bechtel, professor emeritus of psychology and education, died on Dec. 14, 2017, at age 92.

Bud was an ordained American Baptist minister, and prior to joining the Bates faculty he served communities in Camden, N.J., and Newark, N.J. In Maine, he served as pastor in the Winthrop Friends Meeting and as interim minister at the Court Street Baptist Church in Auburn and the Henderson Memorial Baptist Church in Farmington.

In the early 1970s, he directed a demonstration project funded by the federal Department of Health, Education, and Welfare to identify and develop strategies for potentially dyslexic preschool and elementary-school children in the Lewiston-Auburn area. Bud also chaired a curriculum study committee for the Lewiston public school system that, among other innovations, implemented the teaching of French beginning in the fourth grade.

In 1996, his children established the Leland and Claudina Bechtel Award at Bates, a prize for psychology students “who have given significant community service to a local nonprofit agency.” The former Bechtel home on Campus Avenue is now Lindholm House, the college’s Admission office.

At his retirement, Bud told Bates Magazine that he was gratified to use his academic training to serve society. “Whatever you do, you should use it for human betterment,” he said. “Once you get into the applications of psychology to human needs, you’re consumed by it. You’re helping someone.”

There will be no service. Memorial contributions may be made to the college’s endowed Leland and Claudina Bechtel Award or to the National Alliance on Mental Illness of Maine.

Although he had not yet been to Maine when he graduated from Temple University with his master’s, the idea of working at Bates appealed to him, so he sent an application when he heard that there was an opening in the psychology department.

Bechtel was surprised one morning in New York City, where he and his wife were living, to receive a call at 7 a.m. asking that he meet for an interview at a hotel in town. He went and “next thing I know we had an invitation to come here on the weekend of the Fourth of July, and they interviewed us for a whole day.” After the daylong interview, Bechtel was offered, and accepted, the job.

Since his appointment in 1957, he has been a member of the psychology department, teaching nearly every class that the department has offered. He has had his share of trials, but believes he made a good choice.

“In retrospect, the place was ideal for me,” said Bechtel. “We’ve been very happy here. It’s a wonderful place.”

Bechtel has shared a very close relationship with college students during his term at Bates. He still remembers the 1960s and 1970s when there were five students living in his Campus Avenue house, which is now home to Bates’ Admission office, and other students were coming and going continuously. The good times he had with the students, who are still personal friends, are among the best memories of his Bates days.

“I like to treat students with dignity and respect,” he said, explaining the basis of his relationship with them. “One of the rewards,” he added, “is seeing the students succeed in their endeavors.”

Bechtel has a wide range of interests. First and foremost, psychology has always held an attraction for him.

“It pulled so many things together in my own life,” he said. “It integrated human values and science. It is a field that is so broad that you have room to move around. Everything from child psychology to industrial psychology. It’s a very wonderful field.”

Especially exciting for him is engaging in the actual, practical application of psychology. The act of using his chosen profession to help improve the human condition is quite gratifying for him.

“Whatever you do, you should use it for human betterment,” he said. “Once you get into the applications of psychology to human needs, you’re consumed by it. You’re helping someone.”

A major area of interest for Bechtel within the field of psychology is the study of learning disabilities. Dyslexia in particular has attracted his attention, and he has focused much effort on it, including organizing and operating a federally funded program in the 1970s to examine and aid elementary-school children with perceptual disabilities.

Bechtel has many other interests and hobbies. He is intrigued by UFO phenomena and has investigated many reported sightings in the state of Maine. He is also interested in the relationship between electromagnetism and gravity, and its study has become a hobby.

Retirement for Bechtel does not mean an end to work, but simply a change in the nature of the work he will be doing. He plans to spend a great deal of time doing projects at his secluded home in Weld, from which he and his wife have been commuting for the last two years, to beautify the house and grounds. The isolated home, chosen because of his love of nature, has kept him busy during his spare time in the past, and he looks forward to being able to devote more attention to it.

Bechtel’s 33 years at Bates have been rewarding for him, and he is glad he decided to work at the college.

“I have no regrets — lots of strains, lots of challenges, but no regrets,” he said. “I just wish my colleagues and students the best of everything.”