MLK Day 2018: Education is ‘the key to the kind of society we need’

At a time when enlightenment seems to be draining out of U.S. society faster than it can be replenished, Bates pitched in on the enlightenment side by choosing education as the theme for its 2018 observance of Martin Luther King Jr. Day.

After all, what arena is more central to the battle for minds than the field of education, where objective truth, democratic values, the American social contract, and the sheer physical and emotional well-being of tens of millions of Americans are all up for grabs? 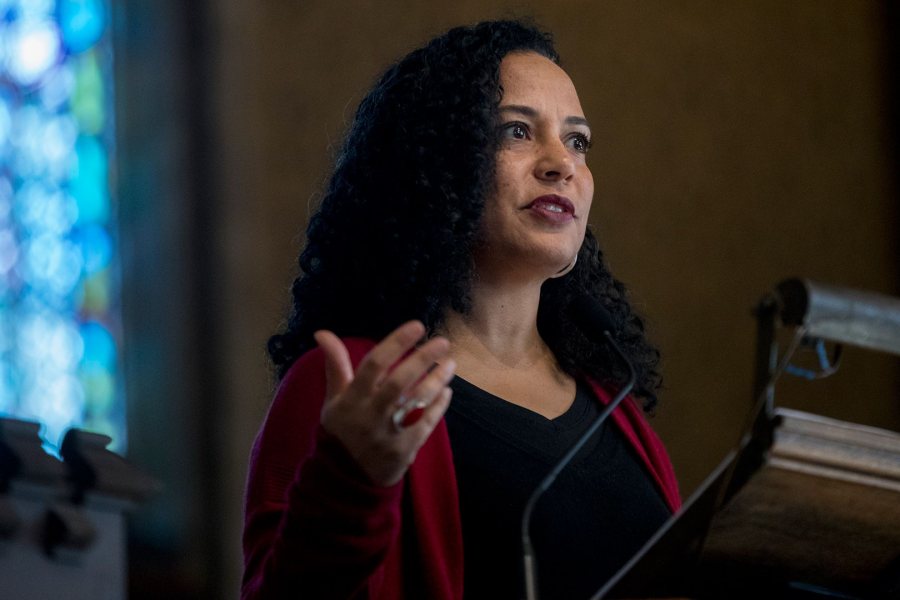 Of course, King himself and his mentor, Benjamin Mays, Class of 1920, were acutely aware of what Bates President Clayton Spencer, in her welcoming remarks at the MLK Day keynote, described as “the strength of the connection between education on the one hand, and justice, freedom, and economic mobility on the other.

“The power of this connection is ironically confirmed by the lengths,” Spencer continued, “to which we have gone to deny African Americans equal access to educational opportunity.”

Titled “Power, Politics, and Privilege: Resistance to/through Education,” the Bates theme “captures a core conundrum of education,” said keynote speaker and education researcher Na’ilah Suad Nasir: “that it can be both a site of social reproduction and a site of resistance.”

“To my mind, education is key to building and creating the kind of society that we need…ensuring that society will have citizens that have the capacity to reason using evidence, to listen to each other, and to create socially just policy and structures,” she said.

Giving the challenges facing American education, Nasir said, “it is imperative that we figure this out.”

The theme found myriad expressions during the three-day King observance. In addition to the keynote address by Nasir, president of a foundation that supports education research, there was the annual debate in which Bates and Morehouse College students teamed up to tackle a highly charged resolution: “This house supports racially homogeneous schools.”

There were workshops and presentations that examined intersections of education, oppression, resistance, and empowerment from every angle. If you wanted to hear about minority protests on campus, multicultural children’s books, racist discourse in the Trump era, how individual school choices affect segregation, advice for underrepresented students in STEM fields, or the college-prep work of a Maine squash program, Bates was the place. 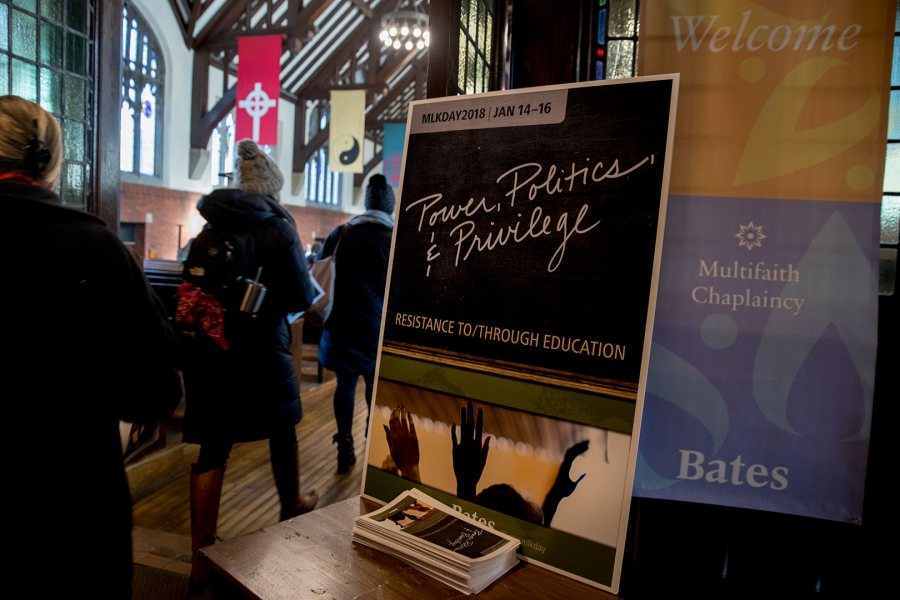 The theme for Bates’ 2018 Martin Luther King Jr. Day observance is on bold display as the Gomes Chapel fills up for the keynote address. (Phyllis Graber Jensen/Bates College)

The sessions were packed and the attendees tuned in. “Bates does a fantastic job of elevating MLK Day to another level, where there’s a universal understanding that this day is tremendously important within our community,” said Ellijah McLean ’20, an African American student from Providence, R.I., who took part in a panel on the role of protests in athletics.

“It makes me feel extraordinarily welcome and makes me feel that Bates is making a genuine and valid effort to educate individual students and the entire community about MLK Day.”

President of the Spencer Foundation and a researcher who studies race, culture, learning and identity, keynote speaker Nasir proposed some groundwork for re-envisioning public schools. She described current challenges — in her words, “the challenges of educating an increasingly diverse population of U.S. young people at a time when federal policy and national discourse is outright hostile to immigrants, to the undocumented, to black people, to disabled people, to queer and transgender people, to women, and to our democracy as a whole.” 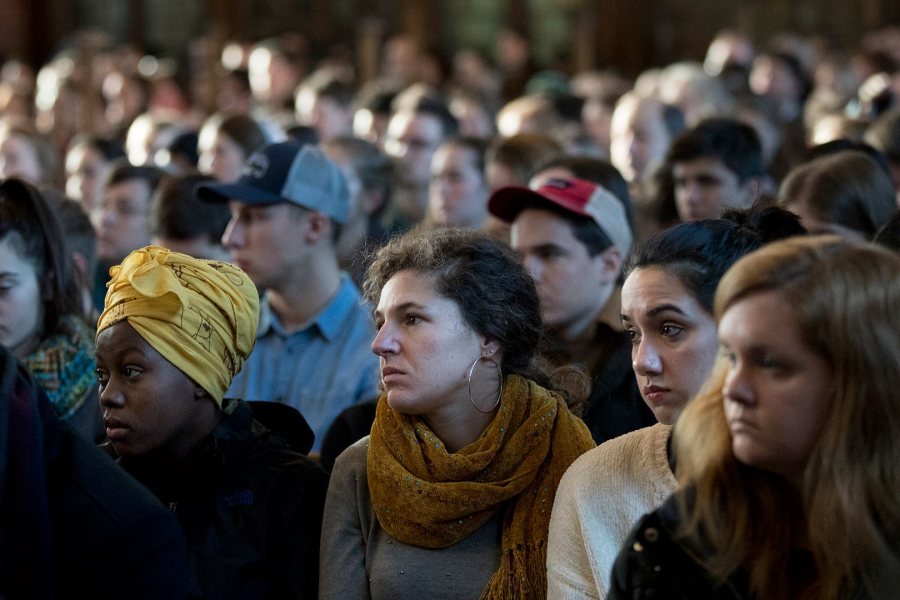 She also offered tenets for meeting those challenges, and illuminated it all with words from Dr. King. The challenges included a decreasing public investment in education that not only hurts students and institutions, Nasir said, but reflects a sea change in the national view of education.

Where Americans once considered education a public good, foundational to a healthy society, now it’s increasingly seen as a private good, “something families can use to get into a good college and achieve access to resources and wealth.”

“This is an alarming shift,” she noted.

Nasir also pointed to a re-segregation of schools that has been gaining momentum since the late 1980s. “For blacks, more than a third of a century of progress in racial integration has been lost,” Nasir said — while LatinX students, who never shared the gains that began four decades ago for blacks, are simply losing ground.

How to address such formidable challenges? Nasir’s guidelines spoke more to emotional perspective than grand strategy:

• Take the long view, and understand that setbacks will always accompany progress;
• Attend to the “pervasive architecture of white supremacy”;
• Remember to cultivate and operate from a place of hope;
• Work collectively to chart the path forward. 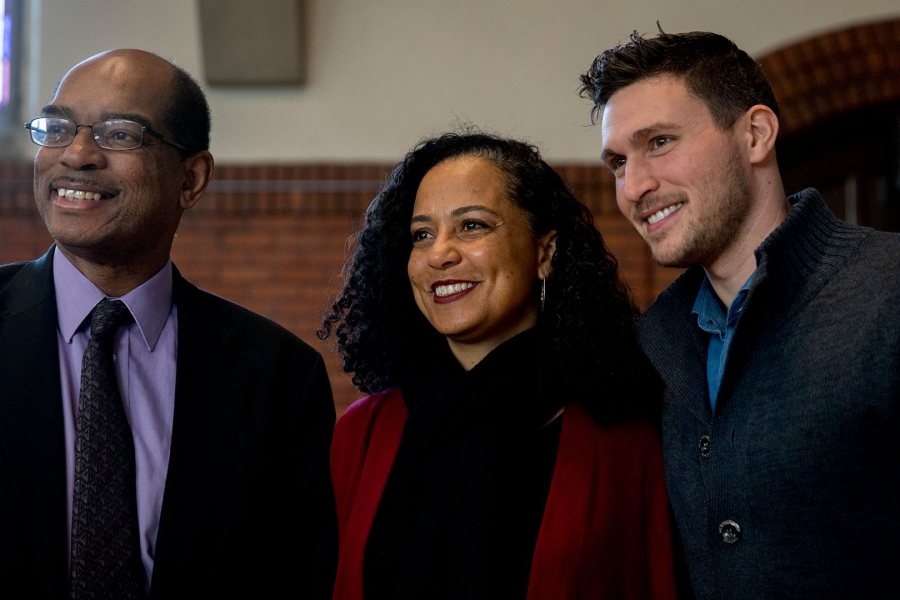 Another tenet spoke to a shadow in King’s personal history — a chauvinism toward women that Nasir associated with “toxic structures of masculinity.” This aspect of King’s character had reverberations in her own life, Nasir said, as well as with the widespread revelations of male sexual belligerence called out by the #MeToo movement.

“The very power structures we fight against in our scholarly work and in our own work as activists can play out in our own lives if we are not vigilant,” Nasir said. “Let’s connect this outer work that we need to do in the world and the inner work we need to do in ourselves.”