“It’s a process,” said Jonathan Clement, foreman for New England Sports Floors. “It’s not like you can do this in a day or two.”

But pretty close to that, or so it has seemed. As Clement was commenting on the progress his team has made since mid-April in replacing the floor of Alumni Gym, his point was that it takes time to do the job right. But for us, the time since NESF started ripping the old floor out on April 18 has gone by in a blur.

When we looked in on May 14, the NESF crew was about done with painting — applying court lines and Bates Athletics branding, including the suave stylized Bobcat mascot at center court. (We petitioned to have the Campus Construction Update logo included in the Alumni floor decor, but no go.) 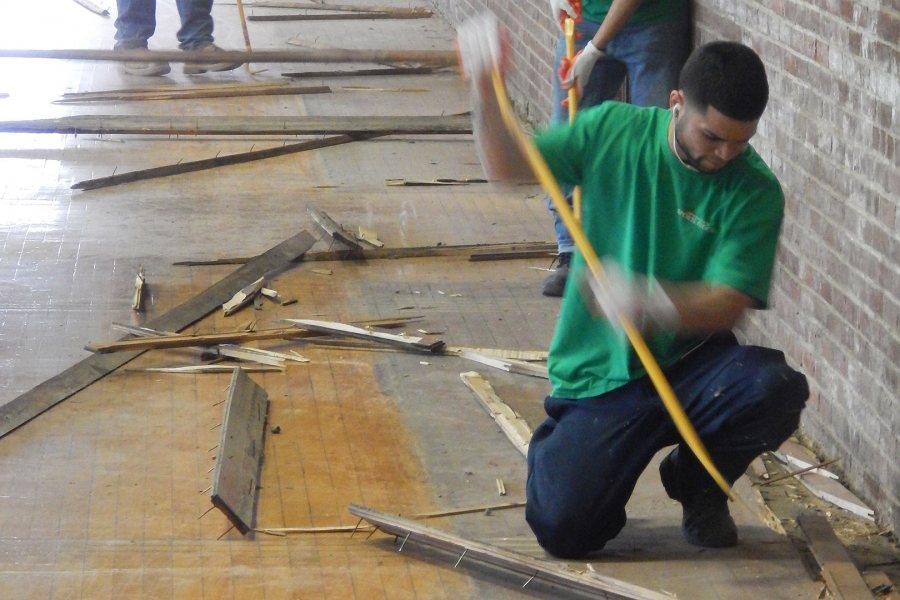 Prominent marks like “Bates,” “Bobcats,” and the mascot were applied with a style of stenciling called “wood reveal.” This is reverse stenciling in which the letter shapes are masked, rather than outlined, by the stencil, leaving bare wood as the actual substance of each letter, surrounded by paint. (In the case of the Bobcat mascot, distinguishing features like eyes and whiskers are bare.)

More intriguing, yet easier to explain — it’s a win-win! — is the process for painting lines, especially curved lines like the three-point line or free-throw circle. Clement explained that a machine lays two tape strips along the desired alignment (including those nice even curves), and the paint is sprayed between the lines. 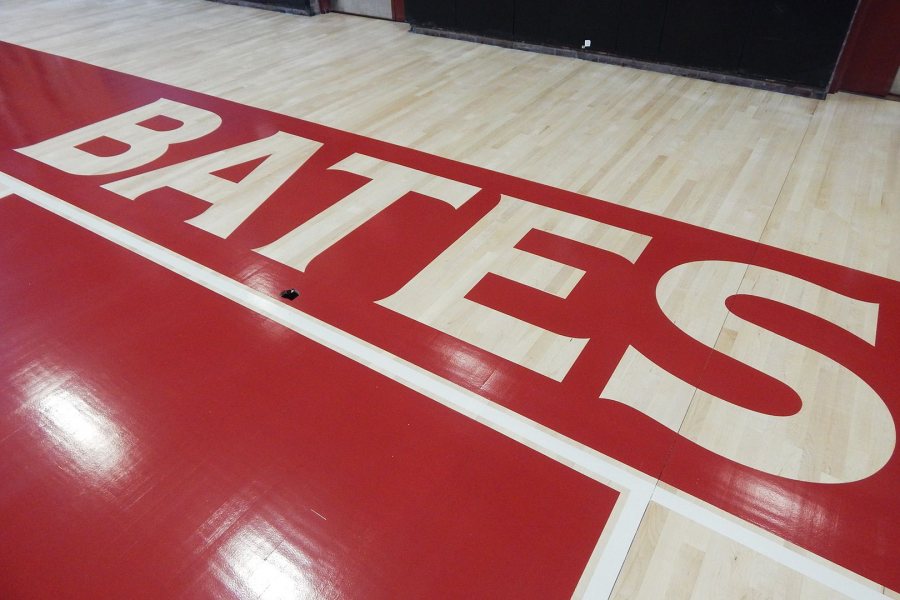 “I spent the last two days pulling up tape,” he said.

During our visit on the 14th, not much of the paint work remained to be done — just touching up, tidying ragged edges with razor blades, and removing the plastic stencils from two white NESCAC logos. The NESF crew was clearly pleased with their work, and rightly so.

A few coats of PoloPlaz NSB Sealer, a water-based coating, applied on the 15th and left to cure for several days, finished not only the floor but this phase of the Alumni Gym renovation that began a month ago.

New bleachers have yet to be installed, but that will wait till after Commencement. If rain (or snow or a plague of locusts, which, let’s face it, doesn’t seem so unlikely these days) forces graduation indoors, Alumni will be used as a robing and staging area — its new floor suitably protected. The bleacher installation should begin the day after Memorial Day. 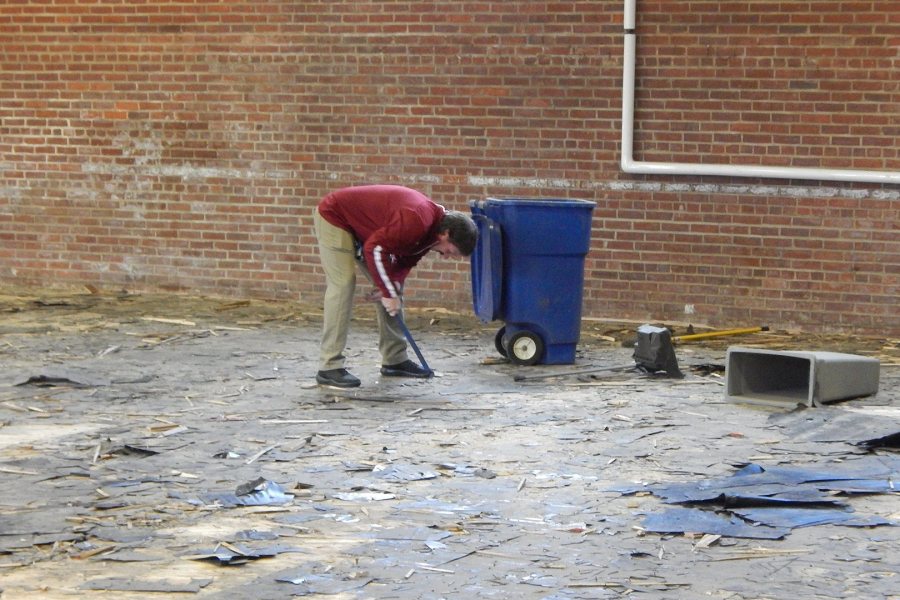 A worker for New England Sports Floors pulls nails during removal of the old floor in Alumni Gym on May 1. The NESF foreman estimated that his crew pulled 10,000 nails altogether. (Doug Hubley/Bates College)

We were glad to see sleek new paint on the sleek new floor. The demolition of the old floor was necessarily a rough business, Clement’s team wielding prybars and hammers to rip out the old wornout maple and a tarry horsehair underlayment.

After a few days the effect was kind of jarring, considering that the floor area is nearly 13,000 square feet. What remained of the old surface was a rubble of jagged wood, scrambled horsehair, and exposed nails, many of them crying out, “Don’t you want to walk over here?”

All of the nails would be removed — Clement estimated that his small crew pulled and threw away some 10,000 of them, a chore that took four days.

The new tongue-and-groove flooring, hard maple like the old, arrived on May 3, delivered by Westy’s Trucking of Oconto, Wisc. (“Are you Westy?” we asked the driver. “No, I’m a driver,” he replied, hurrying away.) 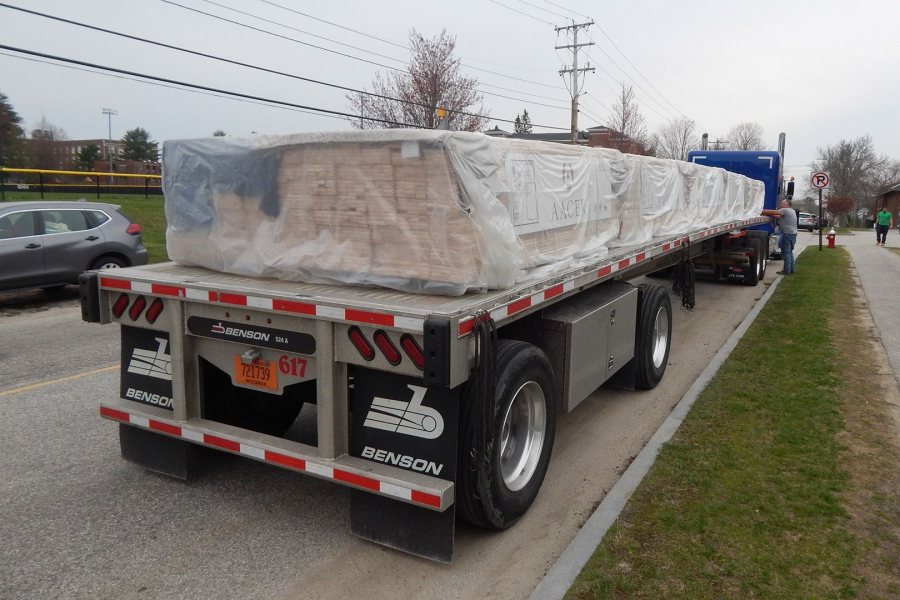 Also based in the Badger State is the manufacturer, Aacer Flooring of Peshtigo, described on its website as “a true northern hardwood flooring manufacturer for the residential, sports and recreational markets.”

Using a rented forklift of the low-slung species known as a telehandler, a four-man NESF crew unloaded Westy’s flatbed semi and wrangled the palleted flooring in through a back door of Alumni Gym — a pretty snug fit.

The wood sat overnight, acclimating to local temperature and humidity, and a specialist from NESF declared it ready for installation the following day, May 4. 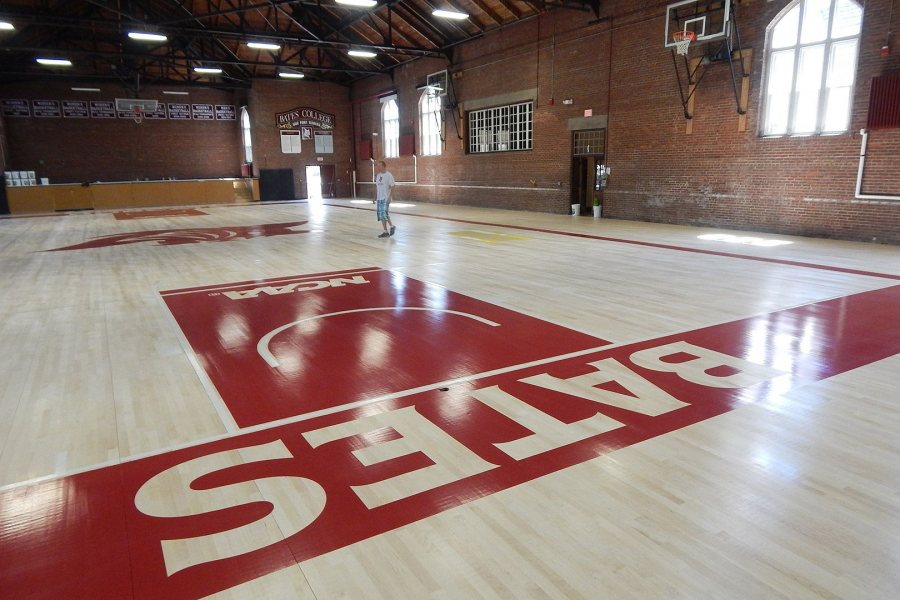 New England Sports Floors foreman Jonathan Clement passes one of two yellow stencils for NESCAC logos in Alumni Gym. Aside from those logos, the paintwork was done in Alumni Gym on May 14, 2018. (Doug Hubley/Bates College)

Bates project manager Shelby Burgau had predicted that only a couple of days would be needed to lay the flooring, and so it happened. Our skeptical eyes were convinced by witnessing the amount of progress made by mid-afternoon on the 4th.

Wood had been cut and fitted to cover more than half of the floor, and much of it was already nailed down. The nails were driven through the tongues, rendering nailheads invisible in the finished product.

Picturing ourselves with a hammer, sore knees, and a pile of bent nails and spoiled floorboards, we were intrigued by the NESF methodology. The workers used rubber mallets for a number of tasks, and one of the tasks was to trigger pneumatic nail setters that, with a sharp bang, drove the fasteners in at the correct angle. Little pot-shaped compressors were scattered around the gym.

When we say “activate,” we mean “hit.” Pushing the nail setters along in front of them, the floor installers moved right down the line swinging the mallets like customers at a croquet driving range. Whack-whack-whack!