Bates at Night: Victory at home

By Theophil Syslo — Published on September 7, 2018

At 7:17 on Tuesday evening, as the sun dipped behind Hathorn Hall, the only noise around Garcelon Field was the hum of metal-halide lights.

But then came the roar from fans and players as the women’s soccer team took to the turf for Bates’ first varsity contest of the fall season.

“We don’t get to do this often,” said head coach Kelsy Ross, referring to the fact that the soccer teams usually play on the grass of Russell Street Field. “Coming to the middle of campus and kicking off the season for the whole community tonight is really exciting.” 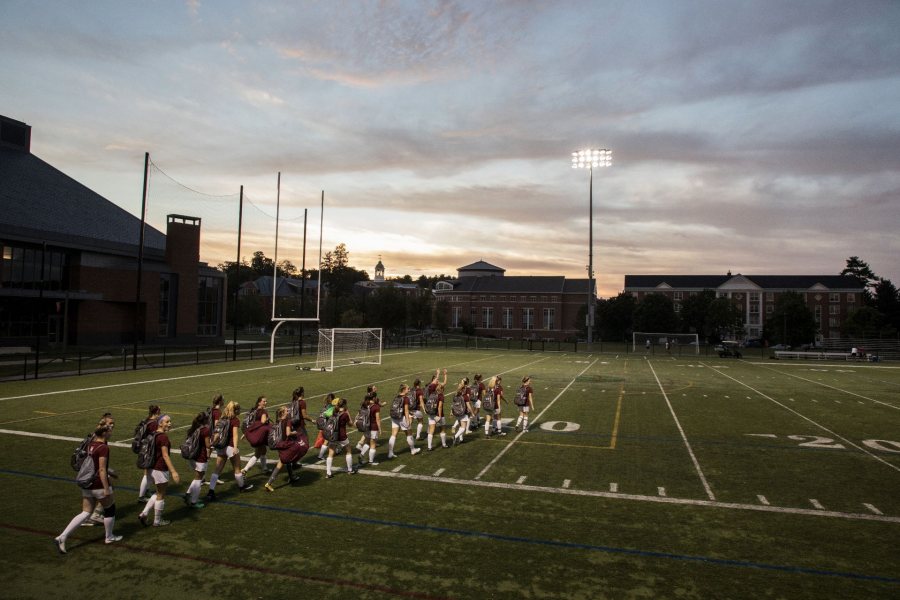 The energy and spirit of the moment, and the novelty of playing under the lights, were not lost on parent Steve Bogue, who made the four-hour midweek drive from Glastonbury, Conn., to see his daughter Caroline Bogue ’21 and the rest of the Bobcats in their 2018 debut.

“Even though it’s not a NESCAC game, it’s the first game of the season and the only game under the lights,” he said. He was roaming the sidelines, camera in hand, taking photos of Caroline. “Like many parents, I suppose we’re living our life over again through our kid.”

Some of the Bobcats were making their debuts as college athletes.

“A rush of excitement and nerves” is how Emma Lombardo, a first-year from Warren, N.J., described the moment that Kelsy tapped her to enter the game.

And Lombardo scored the team’s first goal. “I couldn’t have scripted it better,” she said, recalling her 11 years of club soccer, four years of high school soccer, college recruiting camps, and tournaments.

“The hard work paid off,” she said. “The best part, however, was sharing the moment with the team. We are a tight-knit group. It already feels like a family.”