For Emerson Krull ’19, the topic of her senior thesis was as near as her father’s business and as remote as the post-World War II era.

An environmental studies major with a concentration in art history, Krull has spent much of this year researching the so-called Case Study Houses of Southern California: a series of designs  intended to model efficient, affordable housing for military veterans coming home after the war. 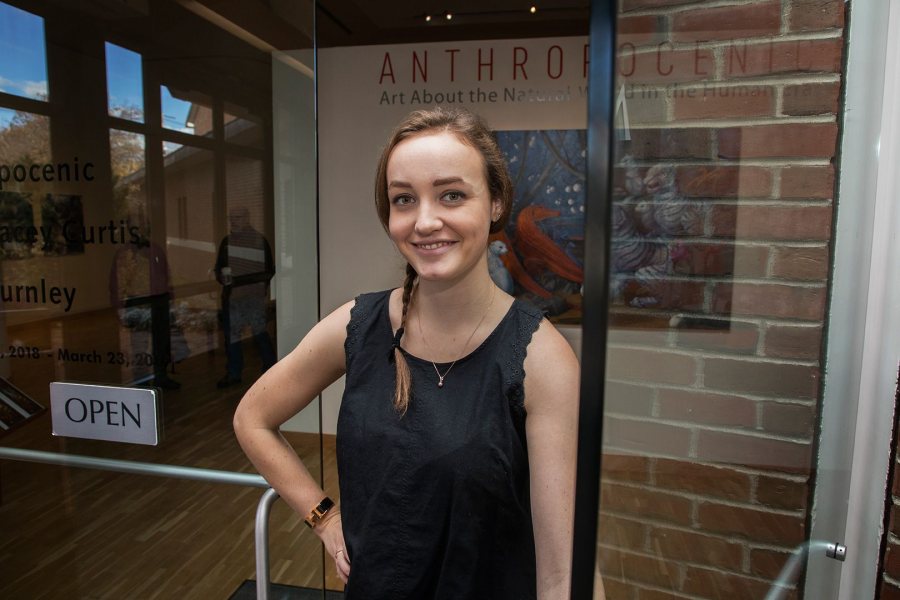 Emerson Krull ’19 poses at the Bates College Museum of Art, where she was a curatorial intern for exhibitions including the current Anthropocenic. (Theophil Syslo/Bates College)

Thirty-seven Case Study Houses were designed, of which 25 were built (seven were later torn down or substantially remodeled). Most of the finished houses were photographed by Julius Shulman, whom Krull describes as “an iconic photographer of modern architecture generally, and specifically of the buildings of Southern California.”

Shulman, for instance, was responsible for a Case Study House image that has become emblematic of Los Angeles luxury (bottom image): two women taking their ease in the glass-walled living room of Case Study House No. 22, seemingly hovering in space high above the city lights.

And Shulman, who died in 2009, was represented by Craig Krull Gallery, located in Santa Monica and owned by Krull’s father. It was through her father and the gallery that Emerson Krull became aware of Shulman’s Case Study House work and the project itself. 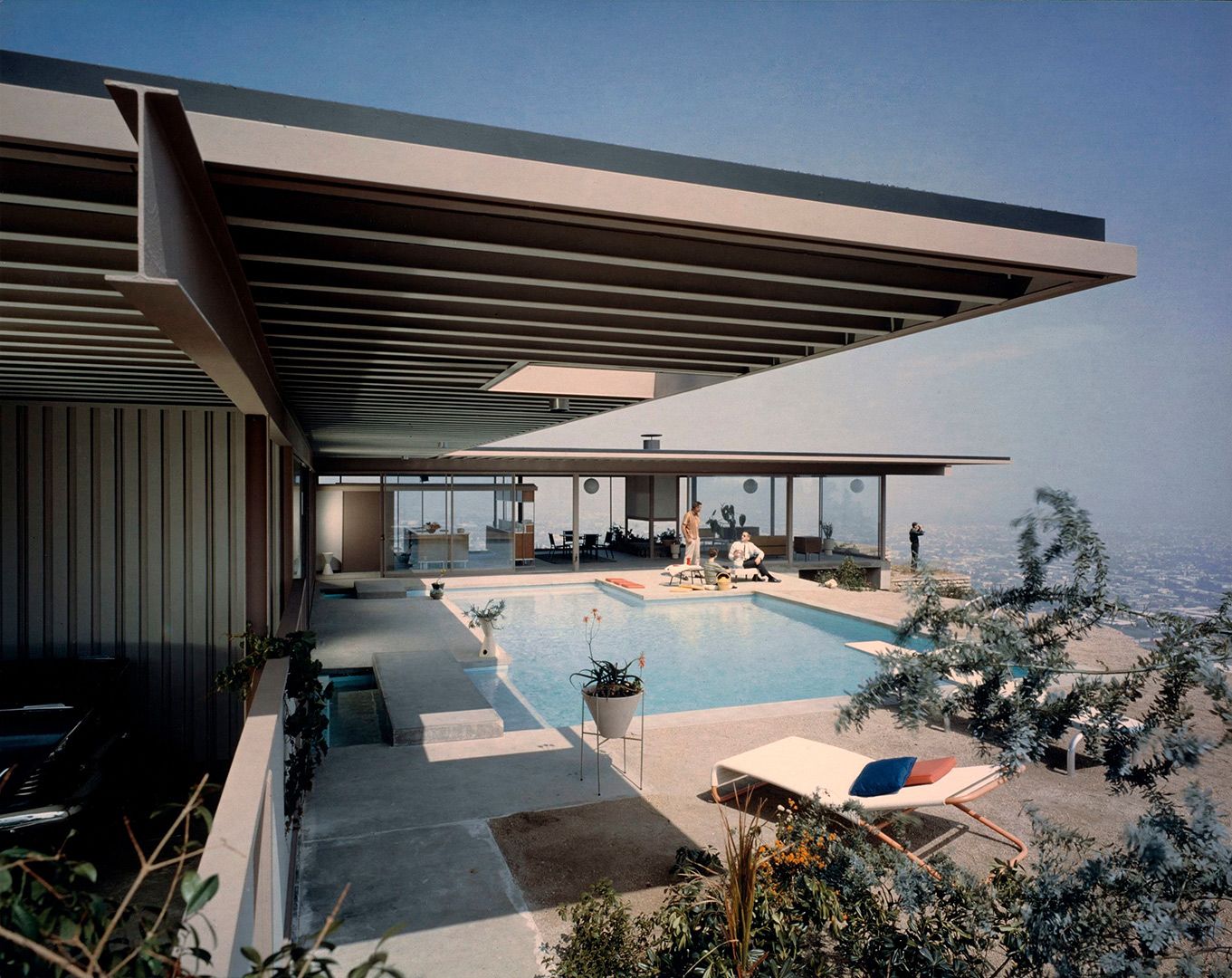 “I always loved the photos and the simple, clean-lined modern design” of the Case Study Houses, she says. “They weren’t really thinking about it as sustainable back then — that wasn’t even a term — but today they can be good examples of sustainable design.”

A Santa Monica native, Krull is passionate about the Southern California landscape at its best, notably the visual harmony between its natural and built environments — a harmony, she says, that she discovered through Shulman’s images.

No. 22, the Stahl House, may be the best-known example of a characteristic shared by many of the Case Study Houses: their thoughtful placements into the natural setting and their expansive use of glass to visually integrate outdoors and indoors.

“That integration is so perfect for the Southern California landscape,” says Krull, whose thesis research last summer included a visit to the Stahl House (which is still in the hands of the Stahl family). “We have pretty good weather, so it makes sense to utilize the land around the house and not just have it be a box on a street. Those architects really used the land and used the views they were given.” 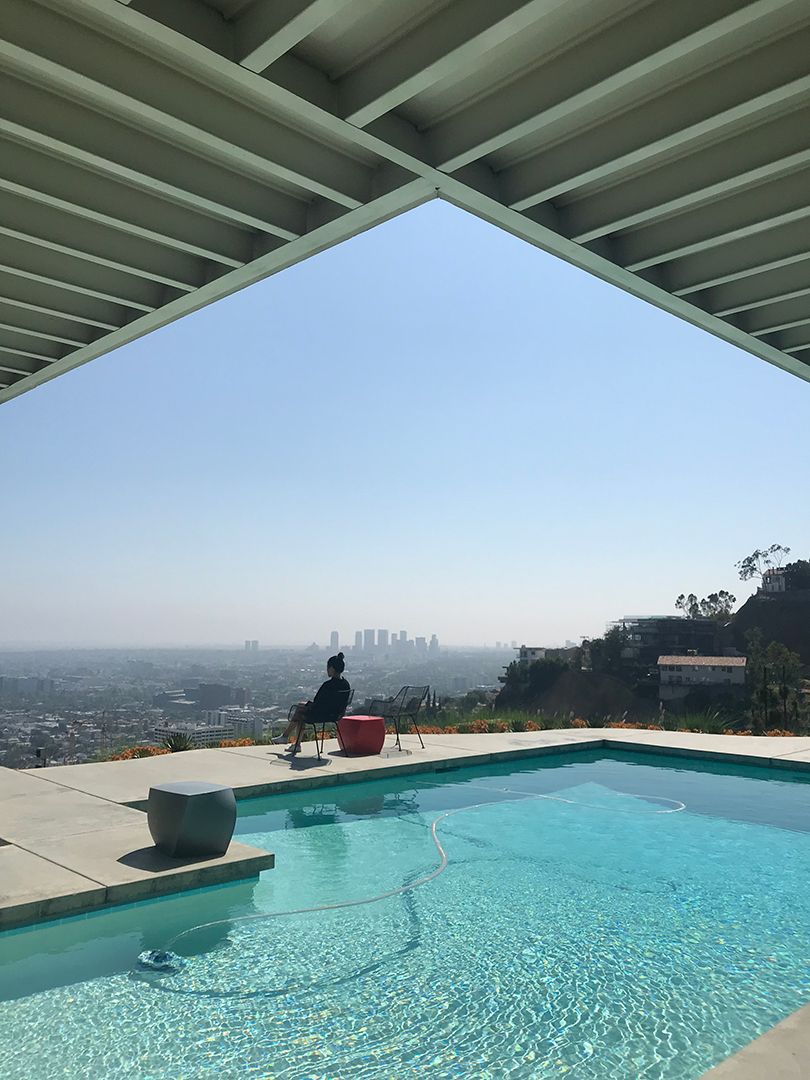 A contemporary view from the Stahl House. (Emerson Krull ’19)

The houses were a project of Arts & Architecture magazine and editor John Entenza, who recruited a host of notable architects, including such eminences as Charles Eames Jr. and Ray Eames, Richard Neutra, and Pierre Koenig — designer of No. 22 — to try to set a course for postwar housing in LA.

“[C]hosen not only for their obvious talents, but for their ability to evaluate realistically housing in terms of need, [they] have been commissioned to take a plot of God’s green earth and create ‘good’ living conditions for eight American families,” Entenza wrote in his announcement of the program, in the magazine’s January 1945 issue. (Of course, the eight-house goal fell by the wayside.)

In general, “the designs balance a consideration for the economy, society and the environment,” Krull explains.

Reflecting the optimism and energy of the time, they would employ building technologies that emerged from the war, and they would be replicable — “in no sense…an individual ‘performance’” by the architect, Entenza stipulated.

Each would seek to fulfill “the specifications of a special living problem in Southern California,” such as the peculiarities of a given site or the needs of a specific family. For instance, Case Study House No. 1, designed by J.R. Davidson with Greta Davidson, needed to be easy to clean and maintain to accommodate the busy lives of its inhabitants, a childless two-career couple.

The Case Study Houses program outlasted the postwar circumstances that inspired it, and the houses were built, mostly in and around Los Angeles, from 1948 until 1966. (Koenig’s CSH No. 22 was built in 1960.) Yet the program retained its experimental outlook.

Sustainability as we know it was not on the radar of Entenza and the CSH architects. But, as Krull shows in her thesis, aspects of CSH design did anticipate contemporary thinking about green design in aspects like functional efficiency, respect for natural aspects of the building site, openness to natural light and ventilation, etc. 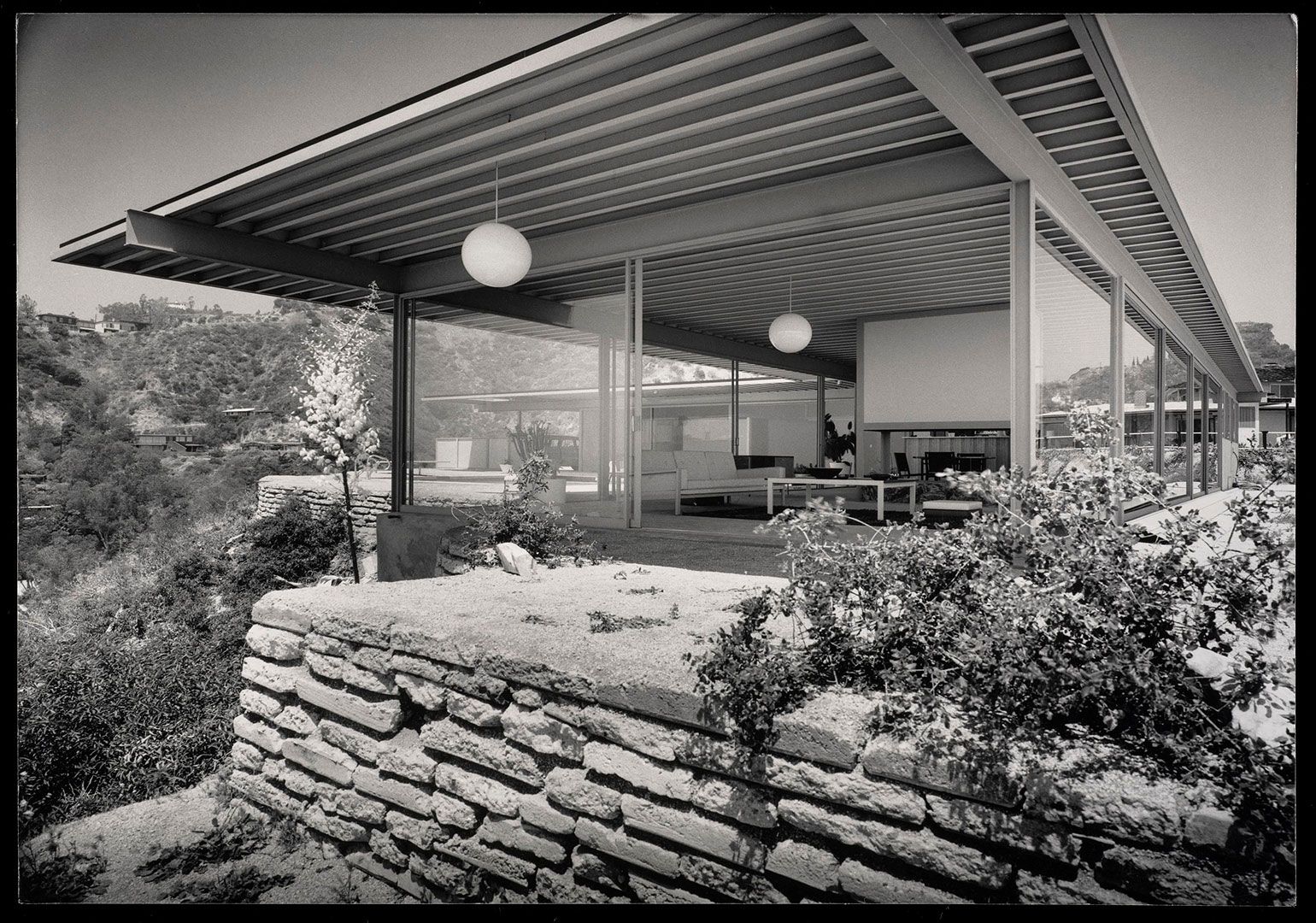 Though an ES major, Krull is approaching her thesis from a visual art perspective. (A curatorial intern at the Bates College Museum of Art in her sophomore and senior years, Krull helped put together this winter’s major exhibition, Anthropocenic). In an unusual cross-disciplinary arrangement, her thesis adviser, in fact, is Ned Harwood, associate professor of art and visual culture.

Harwood, she says, “really helped me understand the historical precursors or precedents to the Case Study House program. He’s provided me with knowledge on the context of the Great Depression, European functionalism, and even early socialist thought, and how these all came to influence the program.” 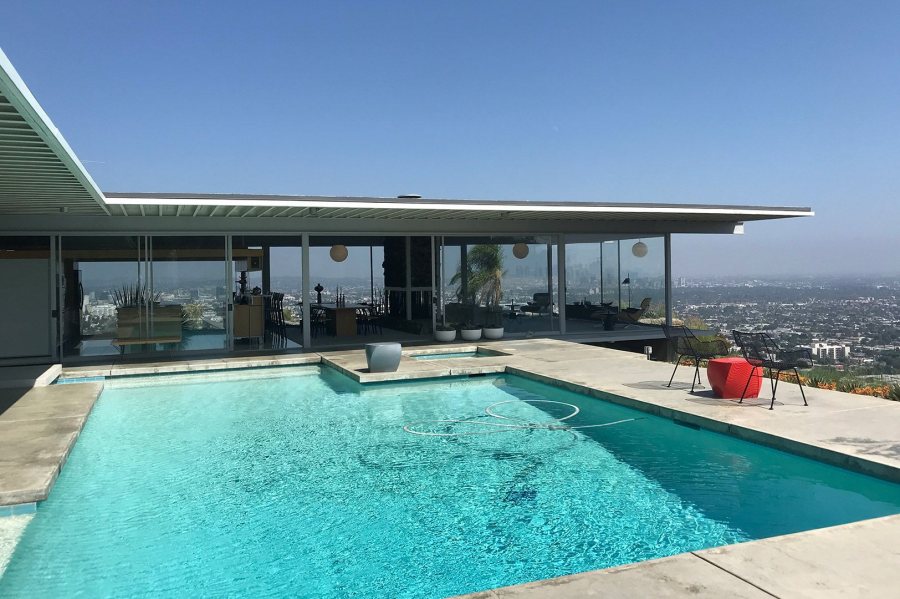 “Emerson’s smart, very engaged, unbelievably well-organized, and a self-starter,” says Harwood. He adds, with a laugh, that students often proclaim plans to do thesis work the summer before senior year —  “but Emerson actually did it.”

Starting before she arrived at Bates, Krull has undertaken a variety of internships related to the visual arts in the Los Angeles region — notably a 2017 stint at the Getty Research Institute, where she did archival work on a collection of images by the noted architectural photographer Lucien Hervé.

The thesis research has given her a head start in understanding sustainable architecture in her home state, a place on the cutting edge of green consciousness. “I’m increasingly interested in working in that field after Bates,” she says.

She adds, “Personally, doing this thesis has been the most inspiring and uplifting project in my time at Bates — an opportunity to research a very specific topic that combines all of my passions, interests, and experiences.” 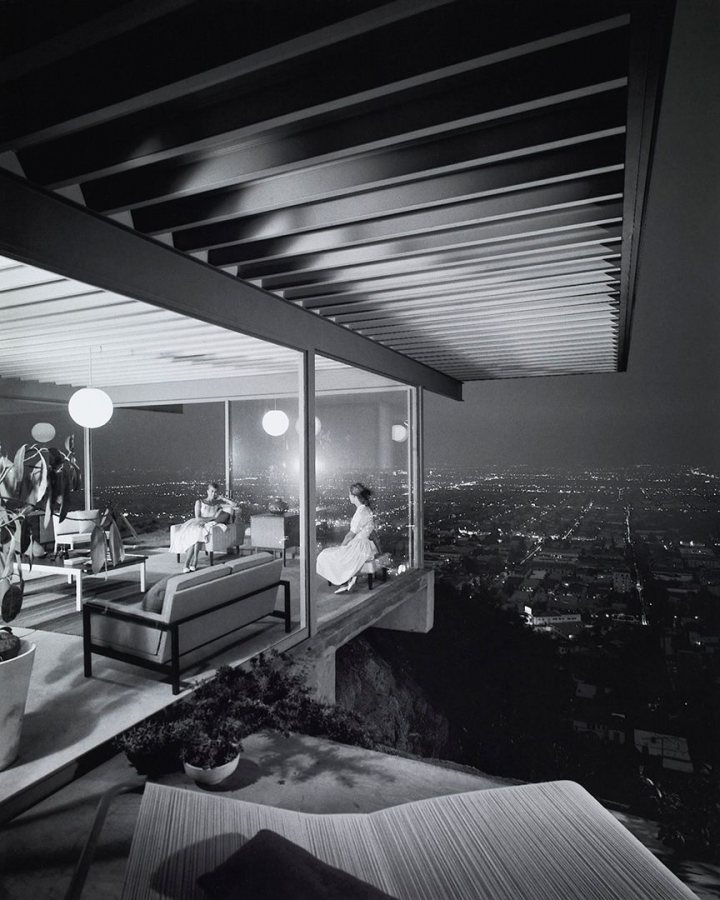