A great Maine tradition — the annual high school basketball tournament — concludes on March 1 and 2 with 10 title games for girls and boys across five different classes to be contested in packed arenas in Bangor, Augusta, and Portland.

It’s a tourney, by the way, that Bates founded 97 years ago.

In the winter of 1922, Bates’ promotions-minded athletics director, Carl H. Smith, invited eight schoolboy teams to Lewiston to compete for the first statewide high school hoops title. (A girls’ tourney would have to wait until Title IX and the 1970s.)

Held March 10 and 11, the inaugural Bates Interscholastic Basketball Tournament took place in the old auditorium of Lewiston City Hall, and the tournament teams were selected by Smith and the sports editors of Lewiston’s two daily newspapers, the Journal and the Daily Sun.

(In later years, as the tournament grew in importance, the selection committee would expand to comprise the Bates AD and two coaches, plus sportswriters from Lewiston’s two daily papers and Portland’s three papers, the Press Herald, the Express, and the News.)

Scenes from the Portland-Deering game at the 1935 Bates Interscholastic Basketball Tournament at the Lewiston Armory feature old fashioned granny shots and set shots, a very young Ed Muskie ’36, and a grumpy coach. Film courtesy of the Muskie Archives and Special Collections Library

A truly statewide event, the first tournament welcomed teams from way up north (Limestone, 230 miles away) and south (South Portland), teams from the east (Bangor, Eastport, Jonesport, and Northeast Harbor), and the west (Rumford and Bryant Pond).

In the final, “the largest crowd which ever witnessed a game in Lewiston” saw South Portland defeat Bangor, 24-22, to win what the Maine Principals Association recognizes today as the state’s first high school hoops title.

It was an upset, as the Daily Sun had promised readers that “Bangor should win the tournament hands down.” The winner earned the right to compete in a New England tournament at Tufts. 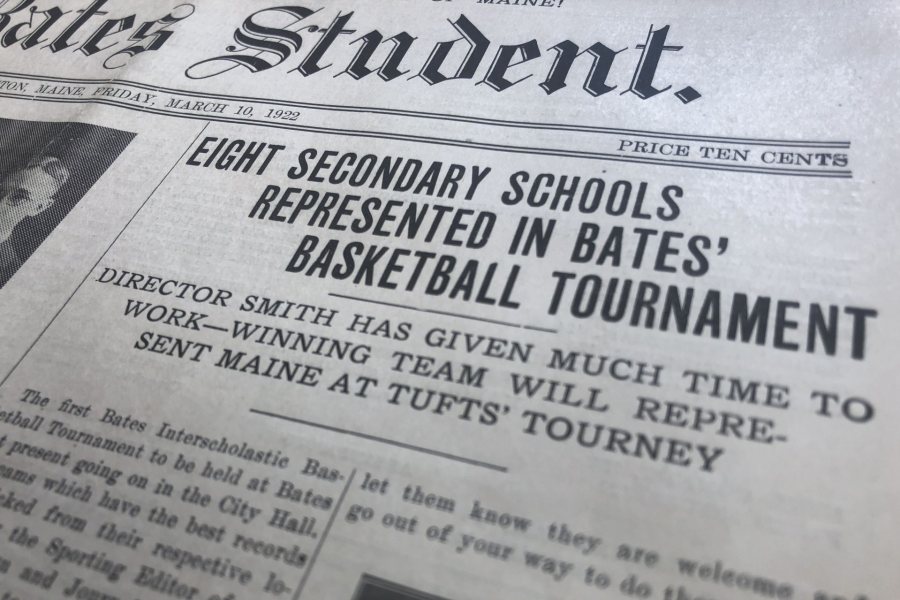 The debut of Bates Interscholastic Basketball Tournament promised the winner the chance to represent Maine at a New England tournament at Tufts.

Bates rolled out the garnet carpet for the visiting teams, putting them up in Bates residence halls, including Roger Williams and Parker, and provided meals in the men’s Commons, then in John Bertram Hall.

“Let’s not fail to extend the Bates spirit of hospitality to these athletes,” The Bates Student requested in its editorial on March 10. The tourney “is a unique thing among the colleges of Maine,” offering an “unusual privilege to greet such a group of high school representatives to Bates.”

Led by the Varsity Club, dozens of Bates students helped out at the inaugural and subsequent tournaments, handling everything from a press table and crowd control at City Hall to housing and meals on campus. 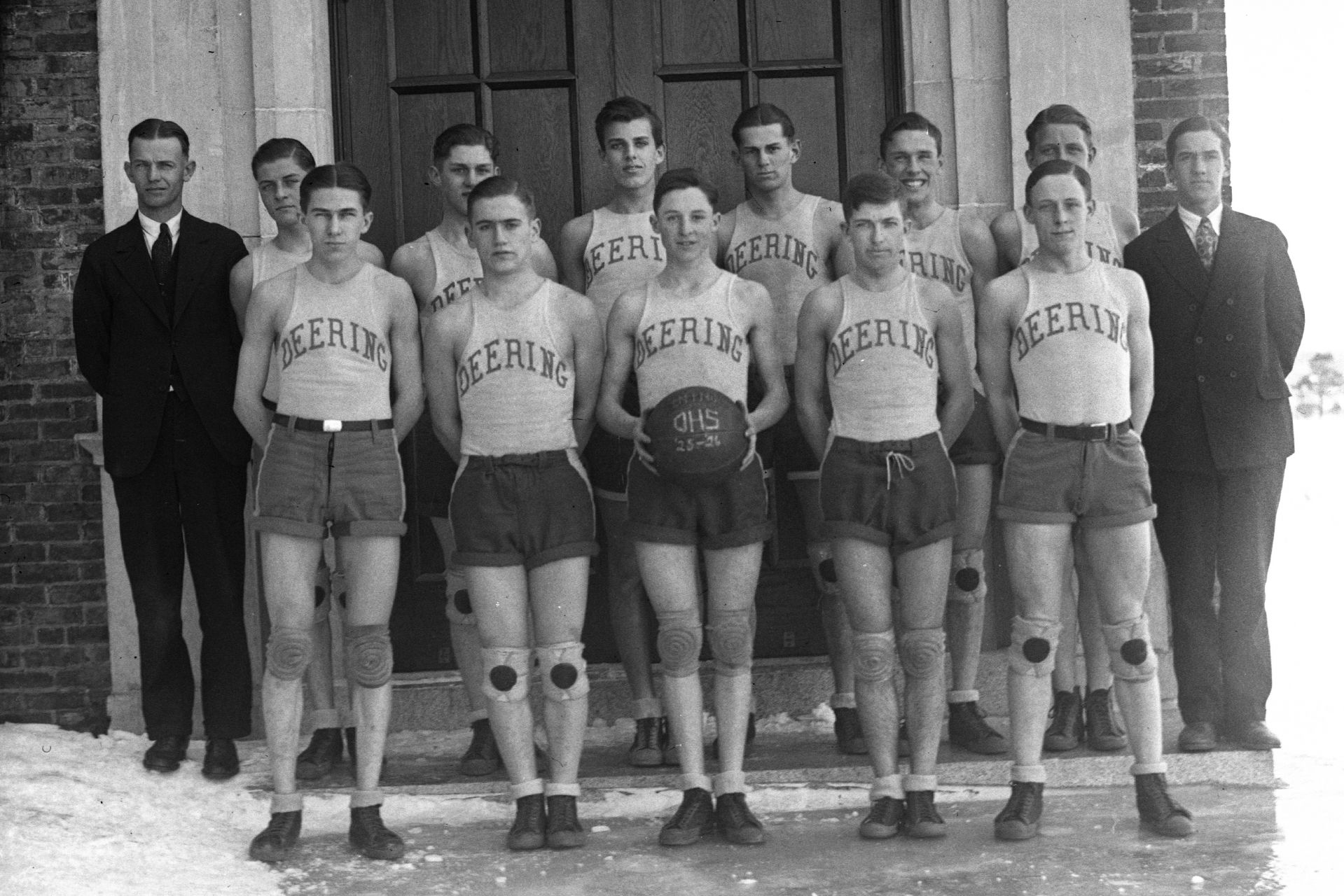 In 1926, the Deering High School boys team was one of eight to compete in the Bates Interscholastic Basketball Tournament, the regional championship of western Maine. (Collections of Maine Historical Society/MaineToday Media)

In 1922, basketball was still a new sport — Bates itself had just started its varsity team in 1920 — and the local papers’ coverage reflected that. Along with tourney coverage, The Lewiston Daily Sun (now the Sun Journal) offered a column of “Basketball Facts Worth Remembering” in Q-and-A format.

A few questions focused on the quirky nature of the City Hall court, where rafters and balconies loomed large. “A player out of bounds makes an honest effort to throw the fall into court,” wrote one reader. “Ball strikes a rafter and bounds into basket. Does the goal count?”

Indeed, the paper said that the otherwise excellent court “could be perfected entirely by placing the north goal somewhat farther from the balcony.” The auditorium, which also hosted popular boxing matches throughout the middle 1900s, is now space for city offices.

Bates tournament founder Carl Smith knew what he was doing with the hoops tourney, having already organized similar high school tournaments in track and tennis at Bates, with the goal of “bringing the pick of the local schools to our campus.”

Something similar was happening on the academic side in the early 1900s, as well, with the Bates Interscholastic Debating League, a state forensics competition that doubled as a recruiting venture. 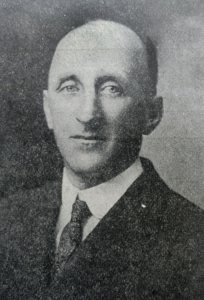 And Smith was a media darling. As the Daily Sun said about Smith, “He has proven valuable not only as a coach but as a publicity man for the college” with “readiness to assist in reporting events connected with the college.” The paper also praised Smith for being “a consistent worker for clean sport.”

After 1922, the University of Maine debuted a tournament for eastern Maine schools, with Bates continuing to offer its tournament for the west. (The two regions were called “the Bates League” and the “Maine League.) 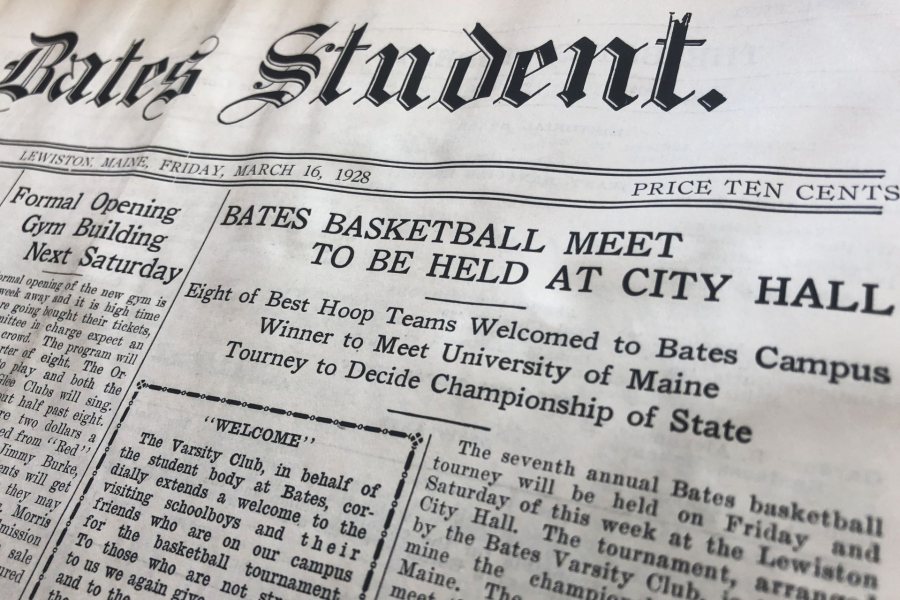 By the mid-1920s, the Bates tournament was firmly established as the regional championship for western Maine schools.

Within a few years, the two regional winners were playing for the state title, with the site alternating between Lewiston and Orono. (Today’s tournament is also regional, except by north and south.)

In 1929, the Bates tournament moved from City Hall to Bates’ new Alumni Gym, and then, in 1931, to the Lewiston Armory. In 1936, the Maine Principals Association, which had oversight of the state game, also took over the regional tournaments.

Both the inaugural and subsequent Bates Interscholastic Basketball Tournaments drew massive press coverage (as does today’s tournament, with this weekend’s finals being broadcast and streamed by Maine Public Television).

After the first tournament, the Student noted that “everyone hopes that this tournament will be a fixed feature of the winter sports.”