From these 10 students, faculty, staff, and two proud spectators — Summit founders Ralph Perry ’51 and Mary Louise Seldenfleur — we learned about secret study spaces, inspiring thesis advisers, and what used to be where Pettengill Hall is today.

Encouragement to flex our creative muscles 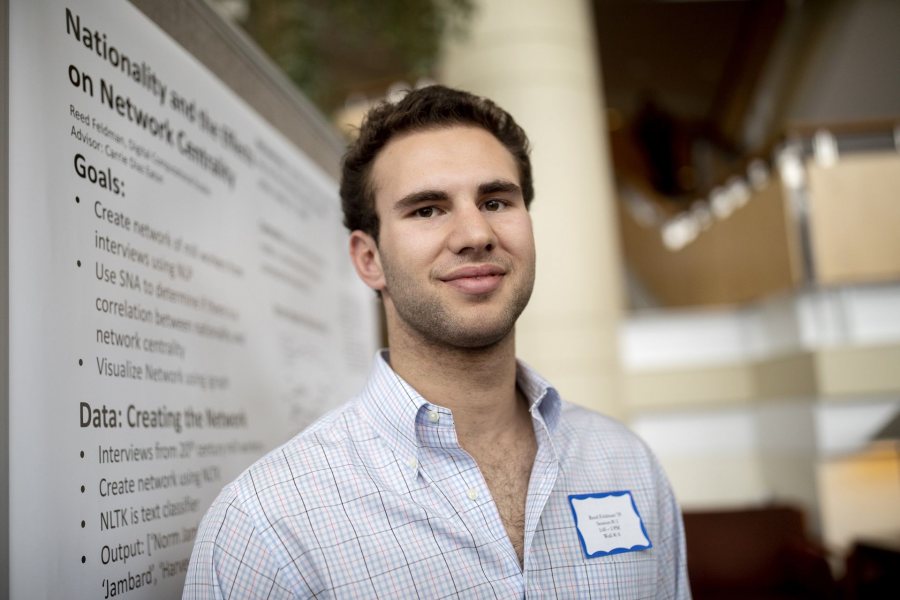 What is your project about? I’m looking at interviews with 20th-century mill workers preserved at Museum L-A, using what’s called social network analysis. Specifically, I’m interested in whether or not a worker born outside the U.S. was more likely to have less social influence than a native-born mill worker.

One word to describe the Mount David scene? Pride. Not just of my work, but to be part of this awesome day.

Next year? Working at a tech company in New York called Symphony. I interned there last summer and I’m going back. I got an offer. 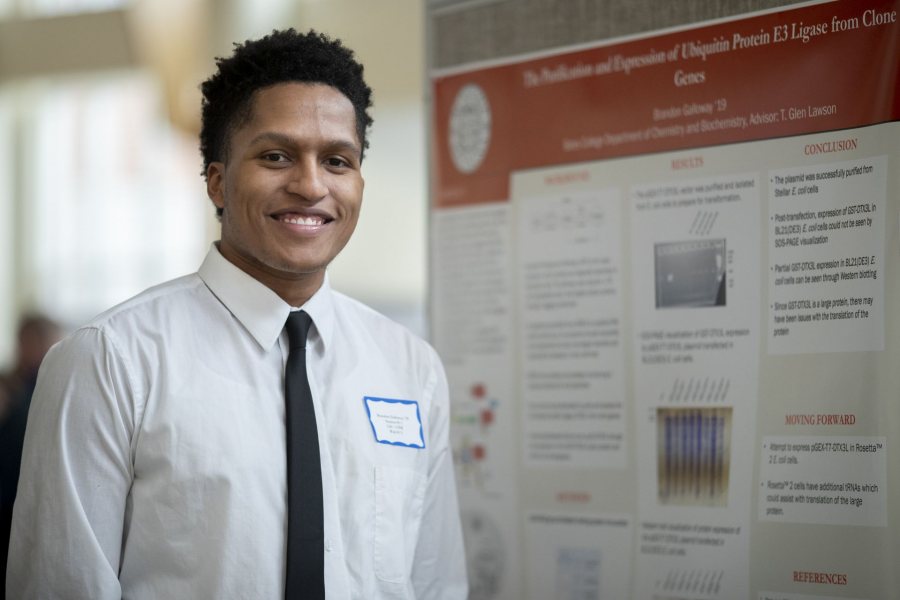 How did you choose Professor Lawson as an adviser? I was interested in protein degradation, and he makes it so interesting. I decided he had to be my first choice as an adviser, and I was lucky to get him.

“Protein degradation” sounds like a bad thing. Is it? Well, no. After a protein in your body accomplishes its cellular task, its amino acids are broken down to be reused. The ubiquitin proteasome pathway, which I talk about in my thesis, is one process for breaking down proteins.

Favorite study spot? I love the lounge on the second floor of Dana Chemistry Hall. You can get a lot of stuff done.

Alone or with a group? There’s usually a group that hangs out and collaborates, especially junior year, when we take some of the core courses. It’s good to be with people who are having similar experiences as you.

One word to describe this scene? Amazing. You just have so many different fields of study coming together at the summit. Everyone loves it. I visited the past three years and dreamed of presenting here.

Next year? Medical school, eventually, but next year I’m planning to work as a medical scribe. I want to get experience working with physicians.

Advice to a first-year student pursuing a STEM major? Talk to professors in different departments. Find out if it’s what you really want to do. It may be hard at times but if you love it, stick with it.

Take any class that you want to 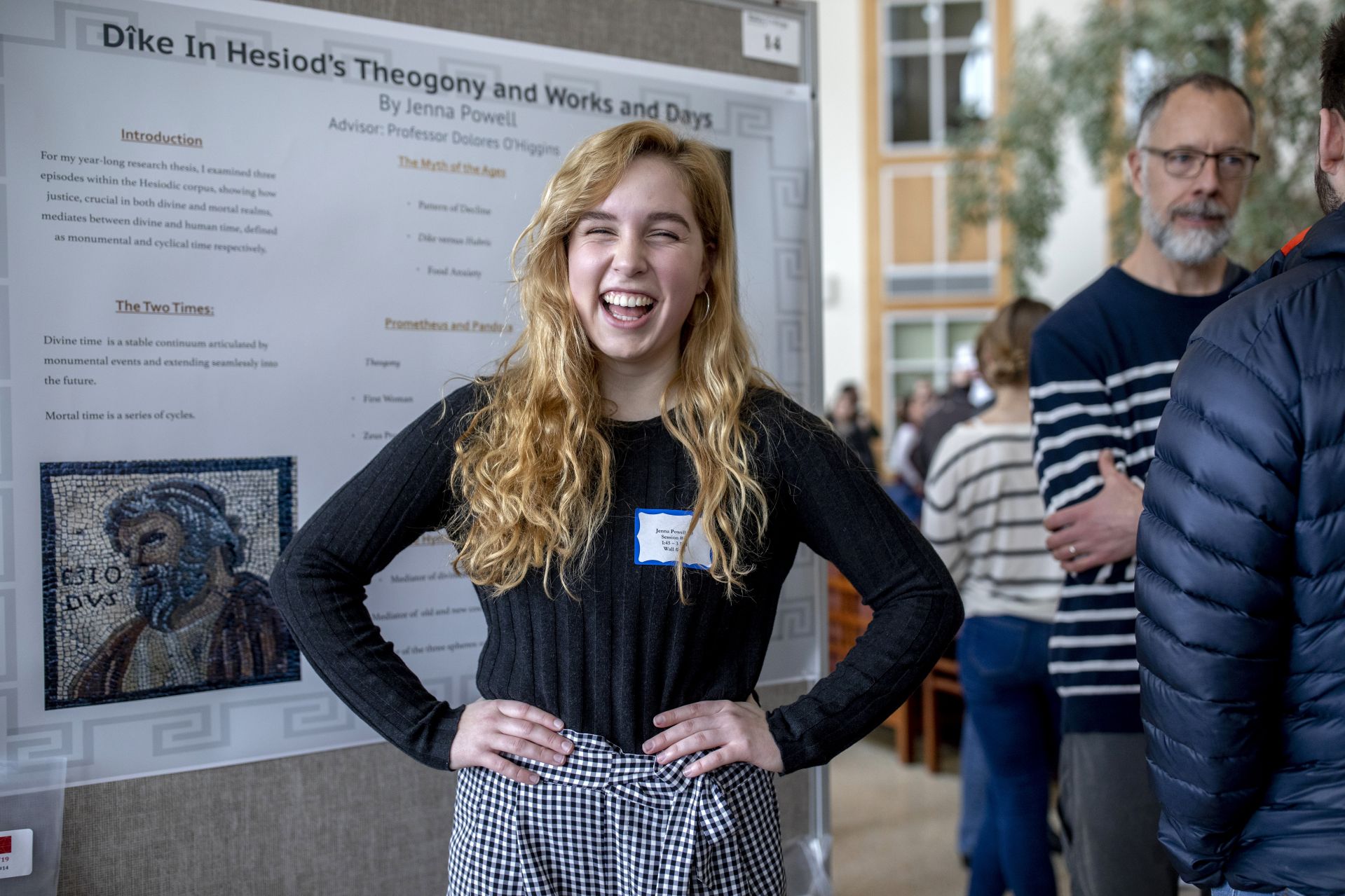 Poster Title: “Dike in Hesiod’s Theogony and Works and Days”

Who is Dike? She’s the daughter of Zeus, the goddess of justice. Zeus typically absorbs female power, but she maintains her power. So she represents a really interesting figure of justice, especially today.

Why is Professor O’Higgins a good adviser for you? Sometimes I can get into my head too much — I have all these ideas. She helps me so I can guide my own thinking.

One word to describe this scene? Inspiring.

Alone or with others? I’m a chatty person by nature, so I tend to work alone, to get work done.

What advice would you give your first-year self? Take any class that you want to. I stayed away from some courses that I didn’t think would help my major. Always take it!

Next year? I’m going to live and work in New York City, then to law school. I feel like I need to experience New York at least once.

Founders and supporters of the Mount David Summit 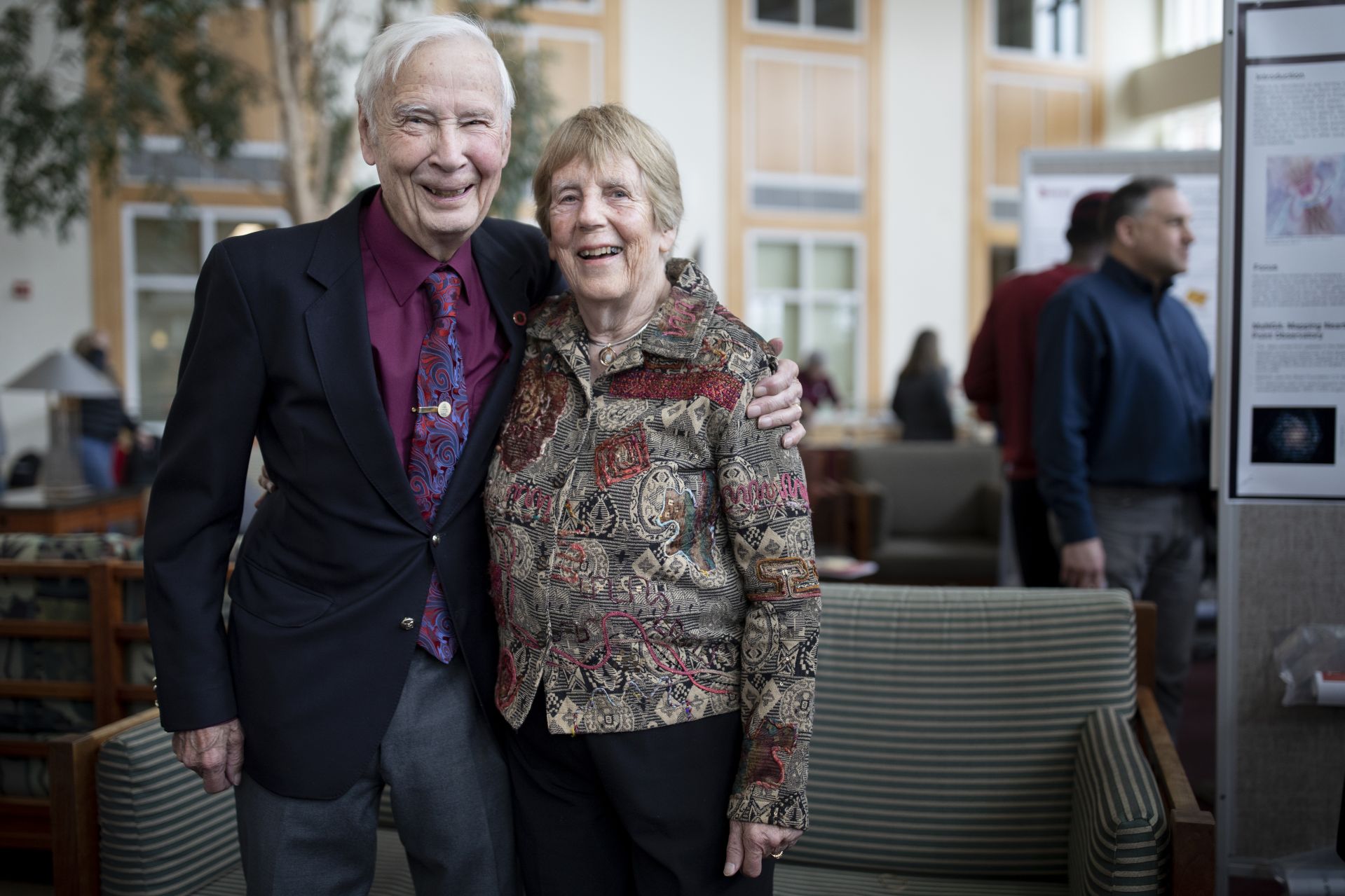 What was on this site when you were a student? Perry: A dump! The old heating plant and not much else.

What role does the audience play at the summit? Seldenfleur: Really important. They help give the event a great sense of purpose.

One word to describe this scene? Perry: Magnificent!

Why is it powerful to celebrate academics in this way? Seldenfleur: Because academics is what a college like Bates is all about. Because it lasts your whole lifetime. 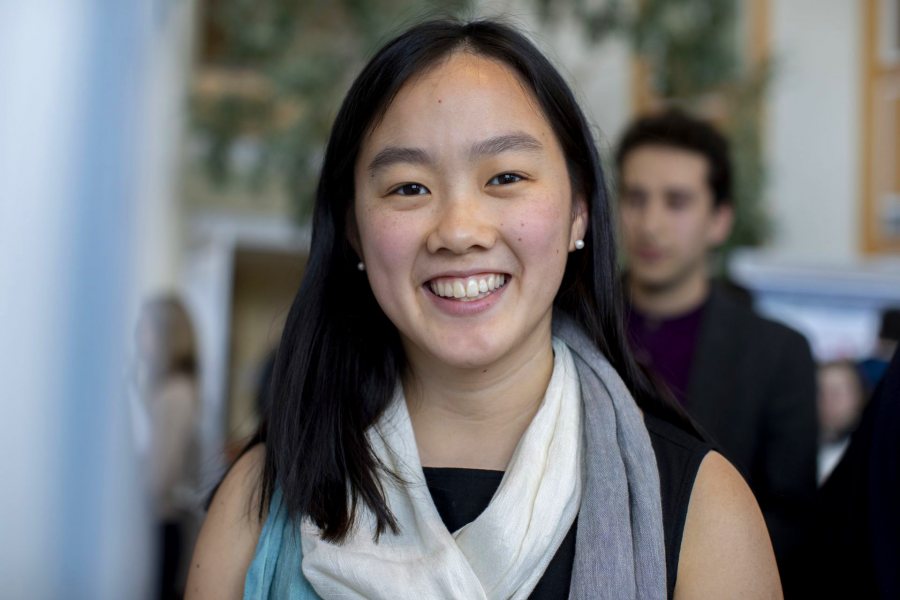 Poster title: “Reimagining Citizenship in the Era of Climate Change”

When did this topic crystallize? When I went to Buenos Aires during my junior fall, someone on my program mentioned climate-change refugees, and I was like, “What is that?”

So what is a “climate-change refugee”? Someone forced to flee their country due to the effects of climate change. I didn’t know the idea would turn into ideas about citizenship, but here we are!

Why is Professor Richter a good adviser for you? He’s guided me, without hand-holding, by asking me questions that help me guide my own thinking.

One word to describe this scene? I’ll be honest: Loud! And rewarding. Even the questions I’m getting right now are helping to push me to think about things I haven’t considered yet.

Favorite study spot? Anywhere that is well-lit, is quiet, and has big windows. I don’t want to give away my spot! But I would say, maybe, the Roger Williams computer lab.

What advice would you give your first-year self? Be open to possibility. Say “yes” to things.

Next year? I’m headed to Colombia on a Fulbright to teach English. 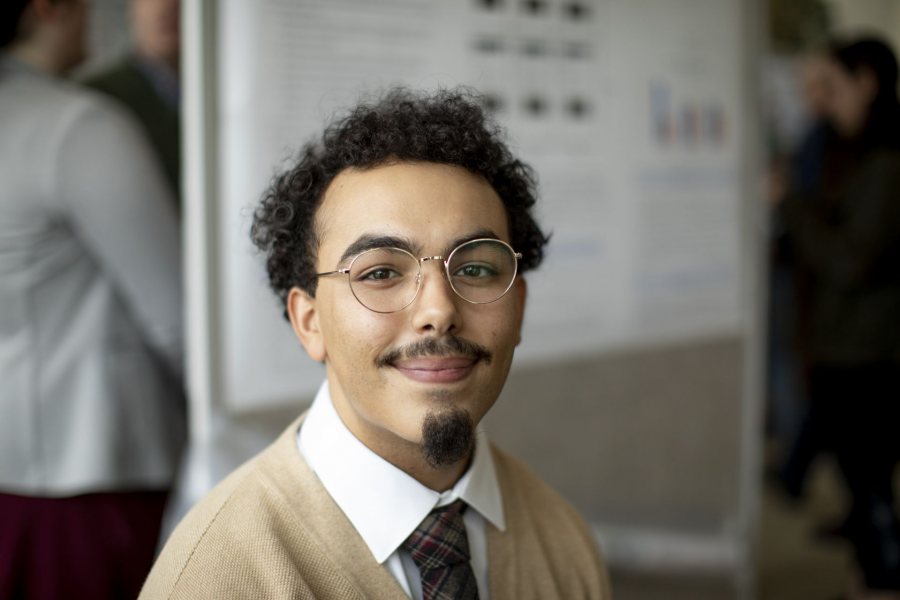 Poster title: “Latino Prototypicality: The Roles of Skin-Tone and Spanish Language Ability on Perceptions of Identity”

Why did this topic interest you? My thesis adviser and I are both Hispanic — he’s light-skinned but speaks fluent Spanish, and I’m dark-skinned and speak no Spanish. That’s where this whole idea developed. We’re like, “Let’s test this.”

What’s the best part of working with your adviser? He kept me on schedule and on point. He made sure week to week I was getting small things done, so it would add up in the end.

Where did you do your research and writing? My room in Moody House; library computers when I used specific software.

One word to describe this scene: Informational.

What was the most rewarding part of writing your thesis? You do so much, and you see the work you put in.

Plans after Bates? Finding a job in marketing or sales, preferably out West.

If you also love it, you can get into it 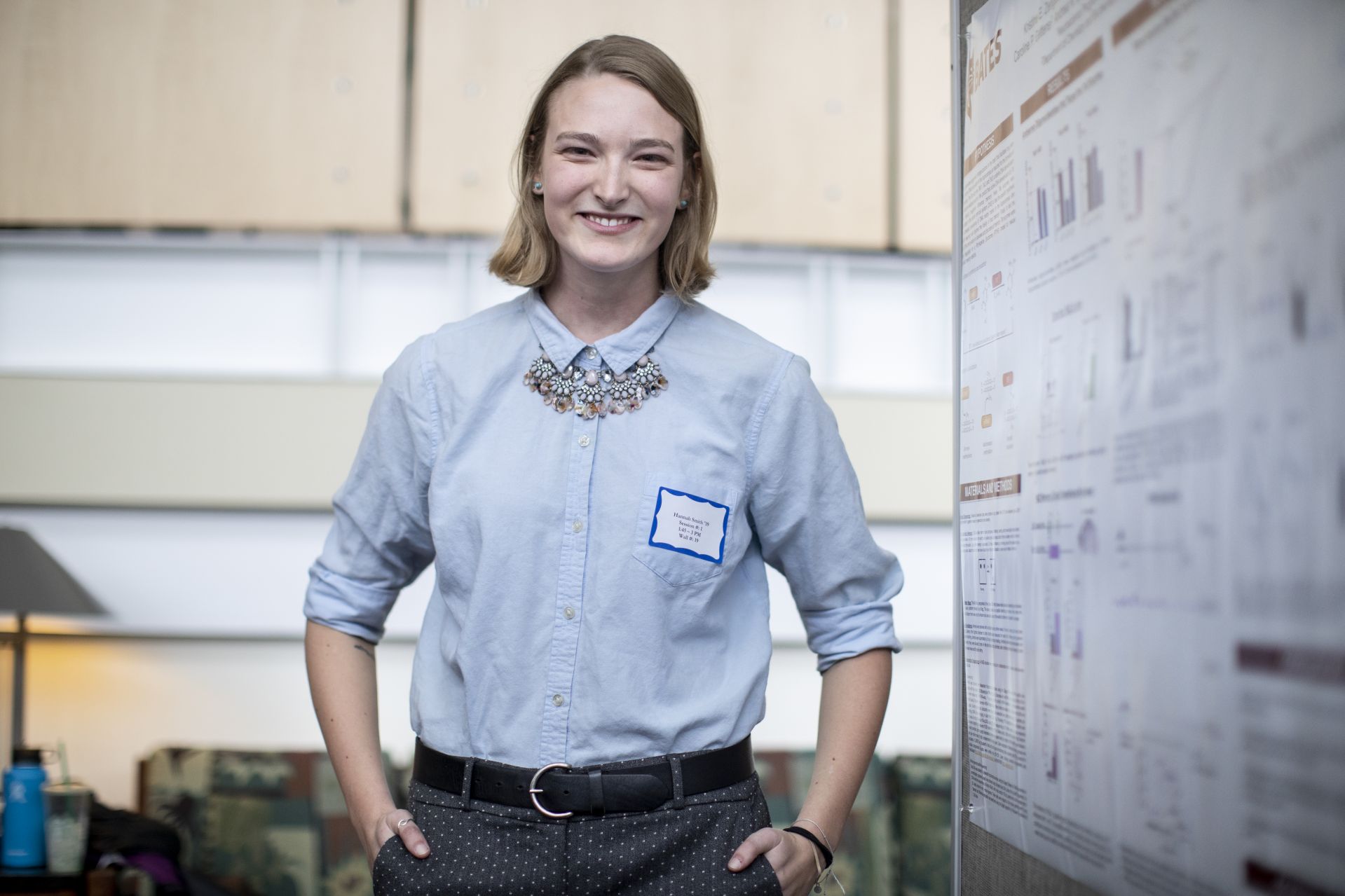 Poster title: “Reducing TET2 in the CA1 of the Hippocampus Enhances Spatial Memory”

Why did this topic interest you? Andrew Kennedy was my organic chemistry professor my sophomore year, and he would talk about his work. I got interested in that, so I talked to him about it, and by the end of sophomore year started working in the lab.

What’s the best part of working with your adviser? His first year was my sophomore year, and I got into the lab pretty quickly after that. It’s been so cool watching the project almost from the beginning, to the really insane results we have now.

Where did you do your research? Andrew Kennedy’s lab in Carnegie Science Hall.

One word to describe this scene? Culmination.

What advice would you give to a first-year? Build relationships with professors. Look into what they’re doing and talk to them about it, because they love it. They want to talk about it, and if you also love it, you can get into it.

Plans after Bates? Doctorate in neuroscience.

I’m super proud of them 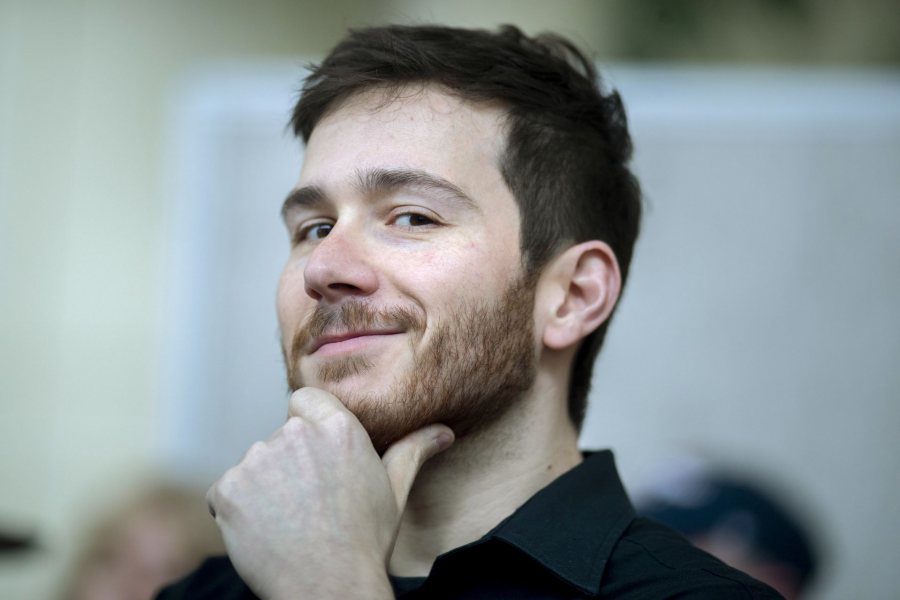 Why is the Mount David Summit important? It’s basically a junior version of the process you’d go through as a professor or graduate student presenting at conferences and publishing your research.

Some of these students will likely go on to do one or both of those, too. I’m super proud of them.

MDS in a word: Perseverance.

It was like catching up with an old friend 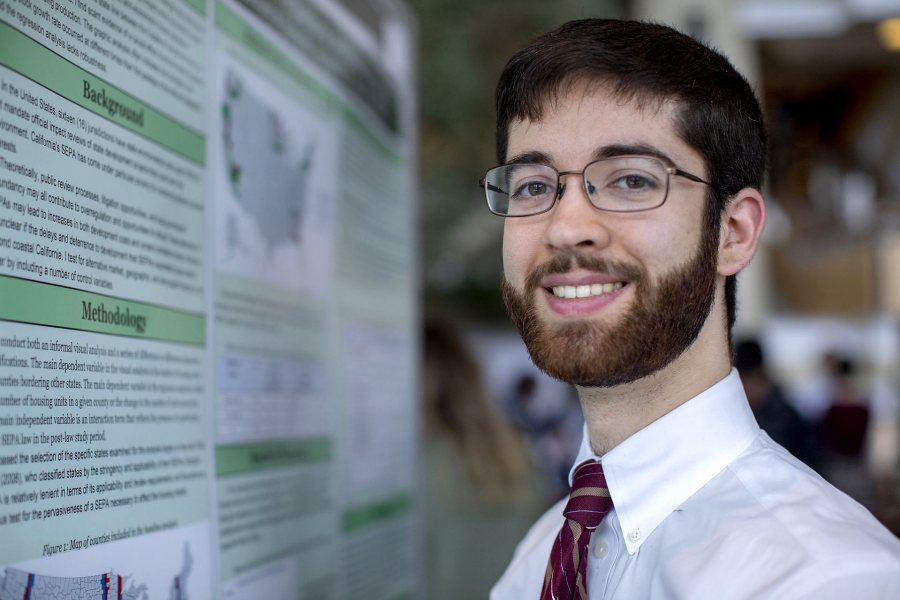 What was the best part of working with your adviser? It was like catching up with an old friend. You get to know him at a deeper level, and it gives you a new perspective on the field after your intermediate classes.

Where did you do your research? Hedge basement computer lab.

One word to describe this scene? Motivational.

What advice would you give to first-years? Take a bunch of classes in a bunch of different subjects, and you’ll find your place.

I’m really impressed by the sophistication of their research 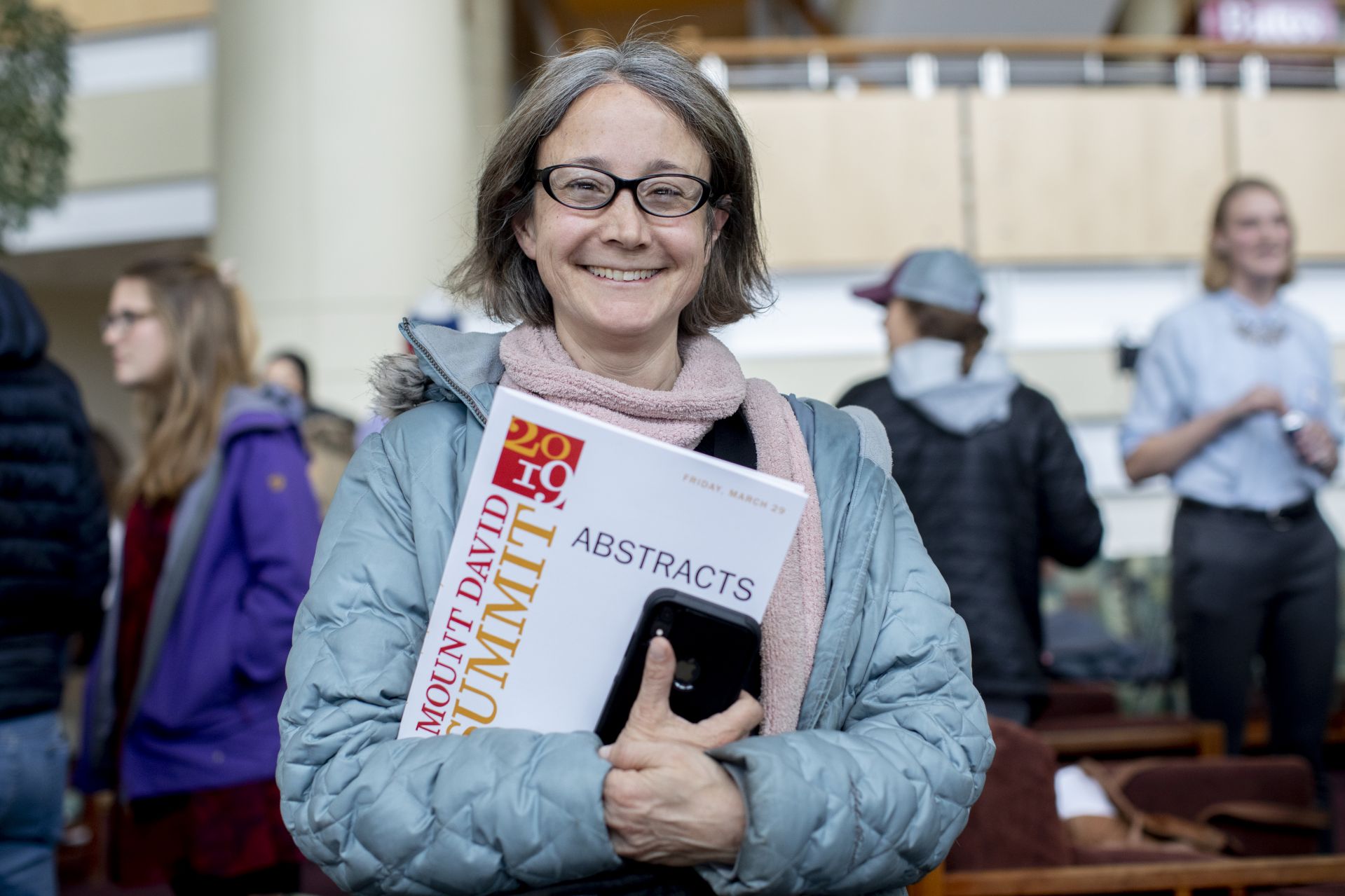 What brings you here? I want to see the sort of research and creative work that students are doing as they graduate. I work with students in the early years, and it’s interesting to see where they’re going. I’m really impressed by the sophistication of their research.

What did you learn here today? I learned about childhood heart disease and barriers to treatment, and I learned that biology students can sometimes work with sociology professors on their thesis projects.

One word to describe this scene? Buzzing.

Does MDS make you miss college? I always want to go back to college. That’s why I work here — because I get to stay in college!