Boats made at Bates, all the way from Japan

“Race on!” someone yelled from the shore. But that was a lot to ask of 14 students making their maiden voyage on the Puddle in long, narrow flat-bottomed boats.

Eight in one boat and six in the other, the students used paddles and poles to meander around the pond for a few minutes before heading back to shore. It was late afternoon on May 22.

About 100 people looked on, as did wary blackbirds perched on the reeds. A skilled canoeist steered curlicues around the student boats to give his video-shooting passenger the good angles. But no pressure, kids!

Now, if someone had yelled, “Chiseling on!” or “Planing on!” those same students would have been all over it — for they had built the wooden Japanese-style boats during the previous five weeks of Short Term.

And they had just launched them in a ceremony that culminated “Apprentice Learning: Building the Japanese Boat,” one of the practitioner-taught courses arranged by the Center for Purposeful Work.

A boat builder and writer from Vergennes, Vt., Douglas Brooks taught the course and presided over the highly ritualized boat launch. The Buddhist and Shinto spiritual traditions co-exist in Japan, Brooks told his audience. But Shinto, whose rituals honor the spirit kami that reside in all creation, rules all things boaty.

“Conducting the rituals brings us closer to nature and closer to something divine,” Brooks explained. “And that’s it. That’s it.”

“I’m doing a purification ritual over the students, who badly need that,” Brooks kidded, “and over the boats.”

A shrine had been set up on a table between the boats. It contained offerings to the kami in the form of fruit, green tea, and sake, and there was a stick to which streamers of accordion-folded paper were attached. To begin the launch ceremony, Brooks shook the streamers over the boats and students, placed a handful of rhododendron leaves on the shrine, clapped twice, and offered a silent prayer. 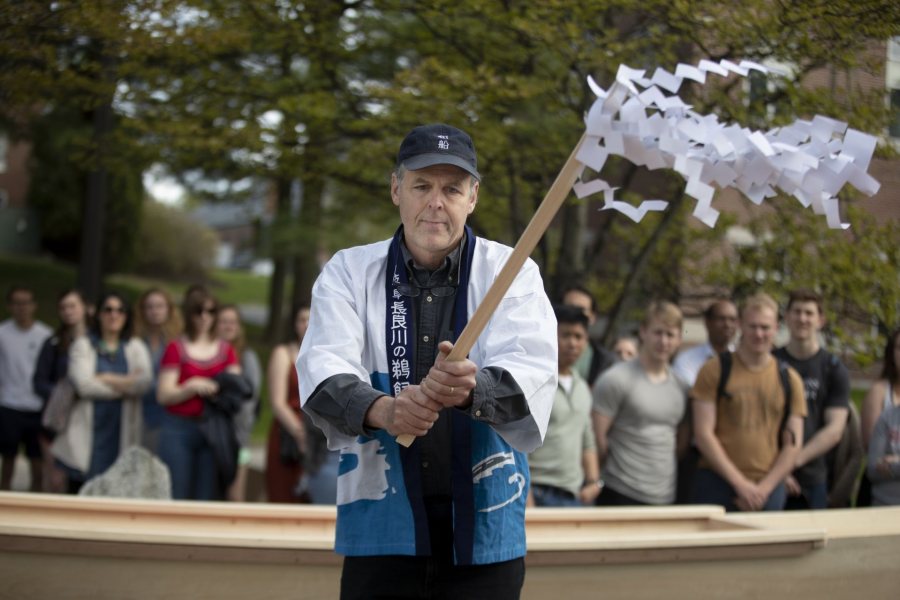 One by one, the 14 students from Brooks’ course continued the purifying ritual, anointing the boats with salt and sake, and striking a few sparks over them, which protects travelers when they leave home.

Then each followed Brooks’ example with the rhododendron leaves (offered in place of a Japanese plant unavailable here), claps, and prayers. A few onlookers took part, too. (One observer was Ralph Sylvester ’50, a frequent visitor to the boat-building sessions.)

Next came an a cappella song that amped up the mood. It was a traditional Japanese song led by En Sawyer Lee, who had met Brooks when both were studying folkways on the same institute on an island in Japan. It was a big rousing song in a sea chantey vein and a smiling Lee got the crowd to join him in a staccato call-and-response of the word “Yoisa!” 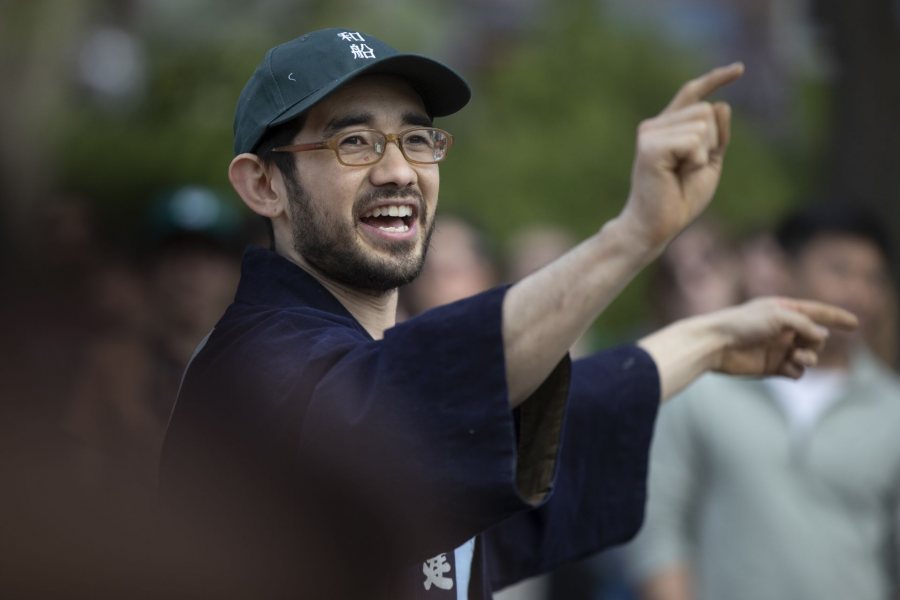 And then, to applause from the viewers, the students carried their boats to the shores of Lake Andrews, slipped them in, and set out across the water. A safe distance across the pond, students in two inflatable vessels looked on. Yoisa!

Varsity rower Grace Murnaghan ’20 of Lexington, Mass., was on her feet poling the six-person boat. The boat handled “surprisingly well,” she said later. “It didn’t exactly turn on a dime, but we were able to get the hang of maneuvering it pretty quickly.

“From what I heard from Mr. Brooks, it sounds like Japanese farmers and fishermen who owned these boats could use the pole to travel with speed in a perfectly straight line, a feat we certainly didn’t conquer in our short trip around the Puddle!”

Japanese tradition informed the boat-building course from the start. Held in a back room off the Chase Hall loading dock, course sessions were mostly silent, with just brief instructions and demonstrations to begin each gathering. The idea was to elevate observation and mindfulness as ways of learning. 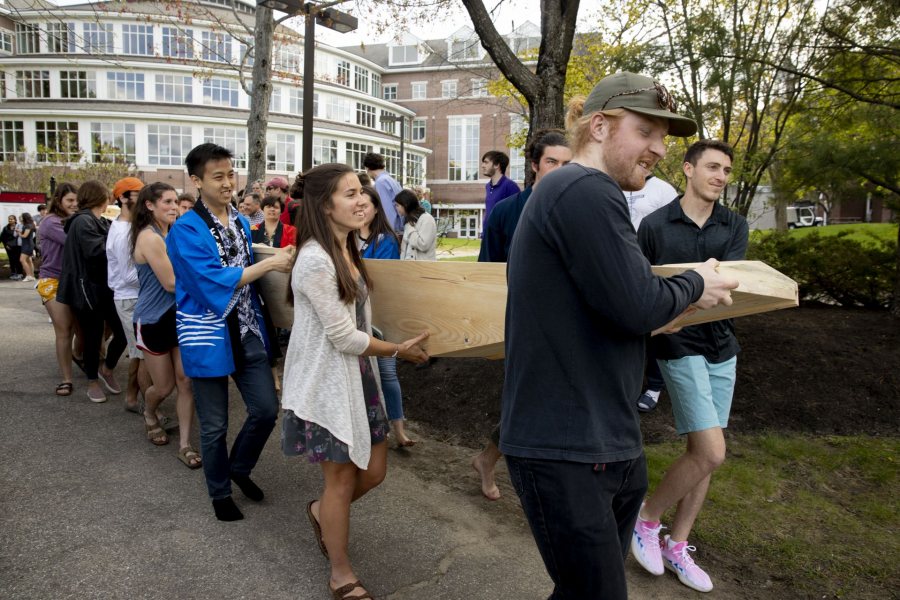 Students carry one of the boats to the water. (Phyllis Graber Jensen/Bates College)

“It’s kind of cool, because you’re focused on what you’re doing and it’s repetitive motion,” Nathaniel Badger ’22 of Edwards, Colo., explained during an open house for the course a week prior to the launch. “You kind of get into this trance where you’re meditating through your work.”

Each of the students learned each of the woodworking techniques that Brooks taught, and learned to flow from task to task according to need, whether the need pertained to the process or to a particular set of aching muscles. 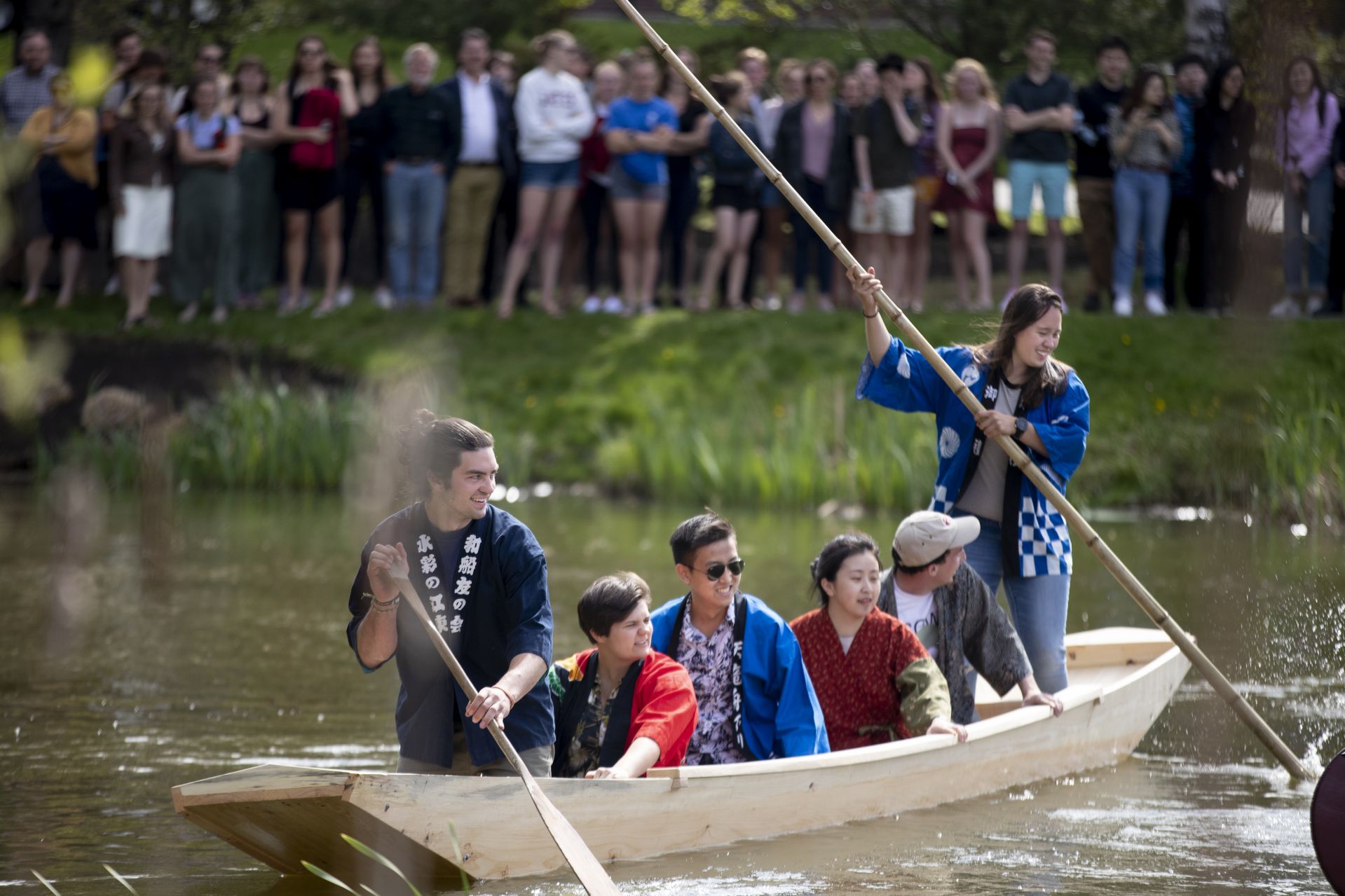 A Bates rower, Grace Murnaghan ’20 handles the pole as her boat executes a turn before the eyes of the crowd on the Lake Andrews shore. Alex Platt ’22 is paddling. (Phyllis Graber Jensen/Bates College)

“One of the first things we were told was, even if you’ve built a boat before, when you walk into the class, assume you know nothing,” Badger said. “You need that fresh start, because if your ego is in the way, you’re not going to get out of the class what you want to get.”

Since 1996, Brooks has apprenticed with Japanese boat builders and written several books on the practice. Just prior to the launch, he described his Bates experience as “fantastic,” drawing the syllables out for emphasis.

“From the organization of this course, working with the Center for Purposeful Work, to the collegiality of faculty who contacted me with an interest in my course, to the students, who really were wonderful and worked very hard,” he said, “it’s been amazing.”