Unlike Campus Construction Update, not everyone brings along an 8-foot stepladder every time they leave the office. (To say nothing of the megaphone for offering helpful advice to construction workers.)

The ladder has given us not only a conversation piece when we bring it into the Bobcat Den, but a means of seeing over the fence that encloses the Bonney Science Center construction. Until recently, more-casual observers haven’t had that advantage when trying to assess the project’s progress because most of that progress has been at or below (or even a long way below) ground level.

That changed on Oct. 9 with the appearance on site of structural steel, fabricated by Structure SBL of St.-Benoît-Labre, Quebec. Most of that steel was floor joists and therefore lacking in visual drama — but steelworkers also erected vertical beams easily seen by passers-by.

A week later, much of the first floor had been decked with corrugated metal sheets to support a forthcoming concrete floor slab. Workers in a variety of trades swarmed over the silvery metal decking as they spot-welded seams, marked locations for utility installations, laid down rebar, and so on. 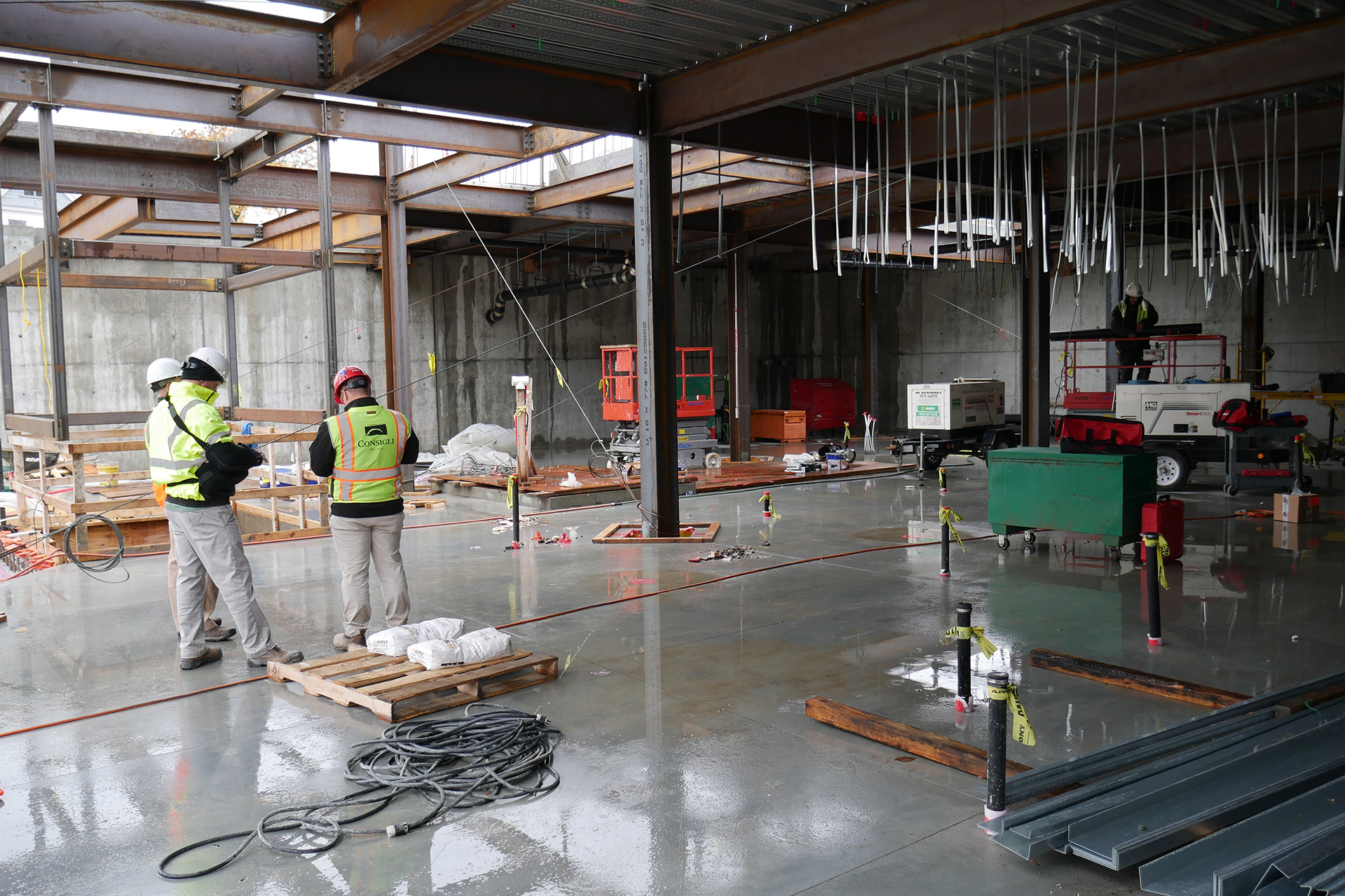 Members of the Bonney Science Center project team consult, at left, during a tour of the basement on Oct. 29. (Doug Hubley/Bates College)

Last week, Concrete Craftsmen of North Monmouth, Maine, started on the slab, getting much of it in place by Oct. 25. And since then the objective has been to complete the slab.

So what needs to be done before that job can be finished? About a third of the Bonney basement is still wide open to the sky, awaiting steel joists and decking. That work’s happening soon.

Then there are the high-level foundations at either end of the building footprint. These are “high level” because they’re slab-on-grade foundations that sit above the building’s basement. One is adjacent to Nichols Street on the western end — dubbed the A side by the project team — and the other, the B side, is next to Bardwell.

Looking like 20th-century fortifications, the A-side footings and a foundation wall are essentially complete. At the B-side, the footings are in progress. 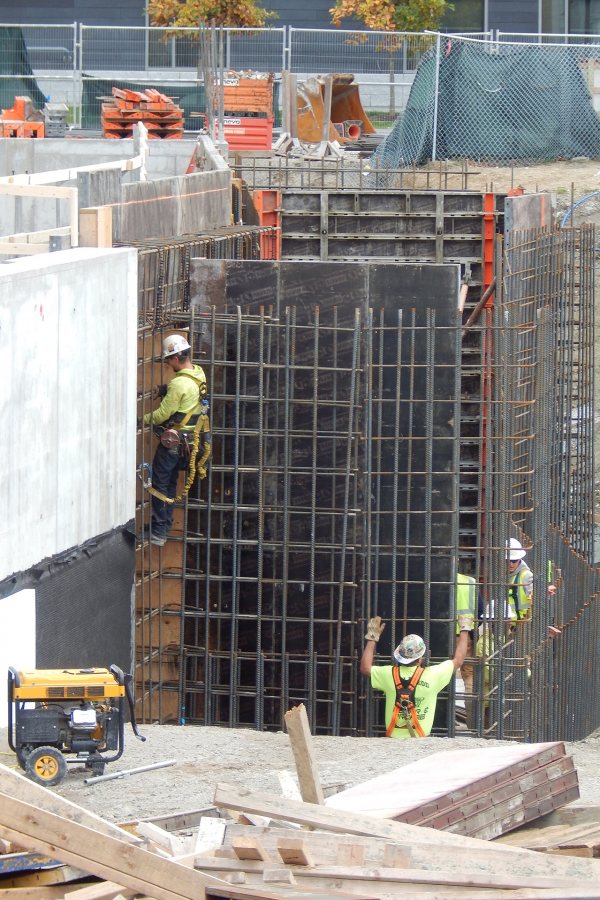 As suggested by the rebar and forms for concrete, the Bonney Science Center areaway will form a kind of open box or wide shaft connecting the basement with the ground level. (Doug Hubley/Bates College)

So when the high-level foundations are done and backfilled, and the last first-story joists are hung and decked over, later in November, the remaining expanses of the first-floor slab can be placed. And then the Bonney center walls will start to rise.

In contrast to the recent Campus Avenue dorms, whose exterior walls comprise structural steel, metal studs, and a Dagwood sandwich of wallboards and veneers, the science center walls will be quite simple: concrete with a brick veneer. In contrast to a steel-framed wall, a concrete wall stands up better than to shearing forces, which is what the experts call sideways pressure. (Imagine leaning against a poorly braced dining table.)

So in the case of Bonney, project design firm Payette’s choice of concrete allowed them to minimize the amount of interior structural bracing, thus allocating more space open for actual use.

You’ll know the exterior walls are coming soon when forms, rebar, and then concrete itself start to appear, likely along Campus Avenue. The concrete crews will follow the first-floor perimeter, and when they get about halfway around, the steelworkers will start setting joists for the second floor, along with vertical beams.

And onward and upward around the building it will go, until the third and topmost level has walls and a floor and it’s time to frame in the roof. “We’re just kicking off what’s going to be the next four months, at least, of very similar type of work,” says Chris Streifel, the Facility Services project manager in charge of Bonney. 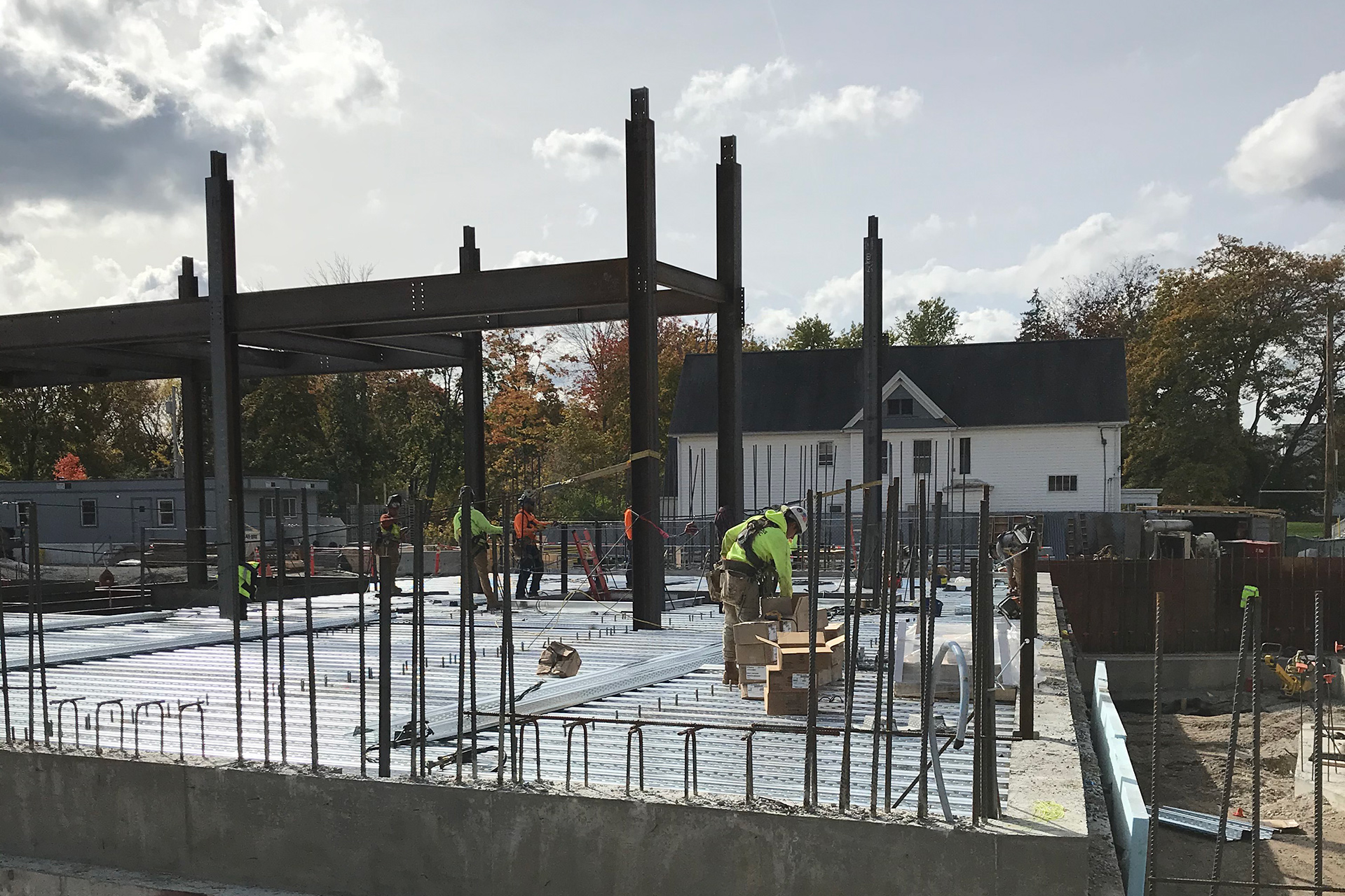 Route, Cellar: But let’s rewind for a minute. Why (reaching for our megaphone) was part of the Bonney basement left uncovered, sans slab, devoid of decking? Answer: The final section of the basement foundation wall, needed to hold up the floor, was still being built.

As we described last time, this is the location of a partially subterranean structure, called an areaway, that will serve as a massive air intake. For a variety of reasons, including the relative complexity of its configuration, the areaway was the last of the in-ground foundation to be started. 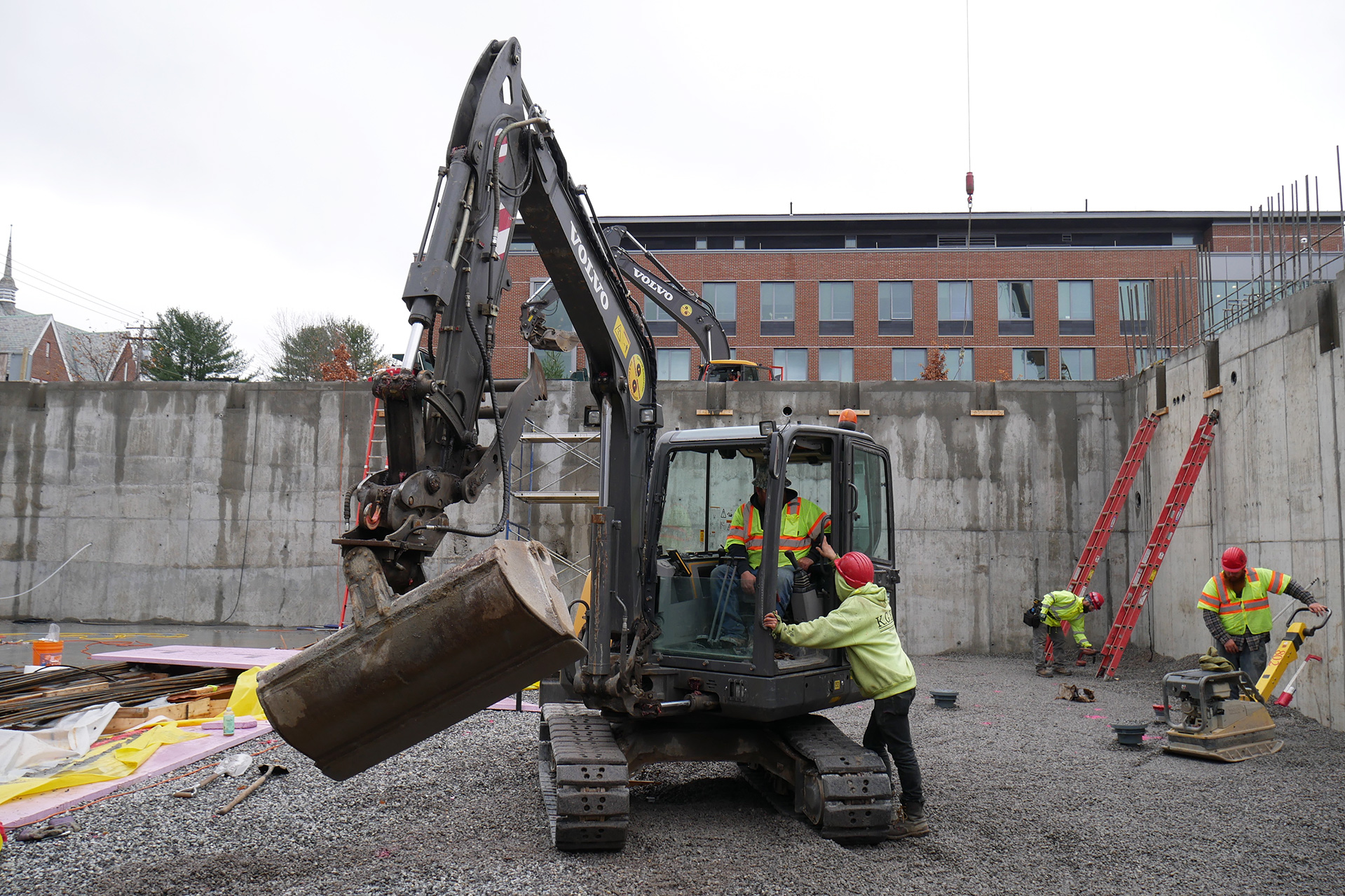 A scene in the Bonney Science Center basement: At center, an excavator operator and a colleague consult while a worker (far right) tends to his compactor and a steelworker (right rear) gathers his tools after working in the beam pocket at the top of the ladder. Chu Hall appears in the background. (Doug Hubley/Bates College)

Getting through the areaway and into the basement involved a downhill scramble over dirt and some rough concrete, laid down for traction; a dip into a trench filled with the famous Bates marine clay; and a climb up a low wall, through a hedge of rebar, and through the foundation wall via the opening that will ultimately deliver fresh air to the Bonney HVAC system.

The rebar will be part of the outer wall of the areaway: a deep, long, and narrow concrete box. If its ultimate purpose is to funnel air into the science center, in the meantime it’ll serve a different vital role, as the port of entry for all of the mechanical equipment and other stuff bound for the basement. Getting it all in there will take some artistic crane work.

Inside the basement, recent rain had left the concrete floor wet. In the corner nearest Chu Hall the floor slab hadn’t yet been placed, and workers were spreading crushed stone in anticipation of that process. Meanwhile, up on ladders, steelworkers prepared “beam pockets,” notches in the top of the foundation wall where joists will be fastened.

Working in pairs on scissor lifts, technicians for Warren Mechanical of Portland, Maine, tended to utility infrastructure up at ceiling level. Already in place were large lengths of drainpipe for stormwater. Dangling from the ceiling like monster tinsel were countless metal straps that will support the extensive HVAC ductwork. 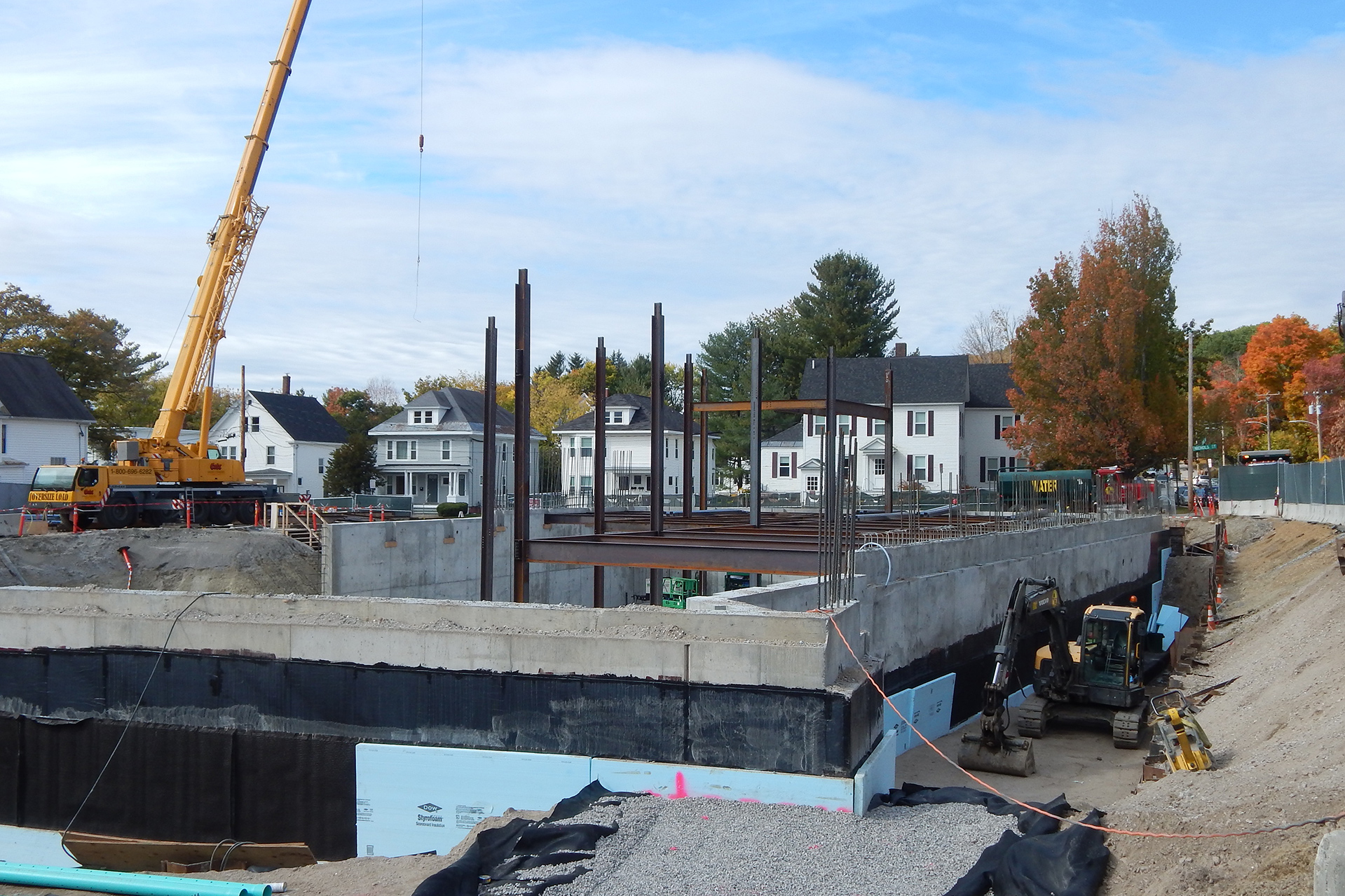 The state of steel at the Bonney Science Center on Oct. 11, 2019. At left, note the gap in the foundation wall where the areaway will be built. At right, note the wide trench and exposed foundation: This area will be backfilled once the first-floor slab is placed, which will reinforce the foundation sufficient to withstand the external pressure from additional tons of dirt. (Doug Hubley/Bates College)

One final thought before we leave the Bonney center and look at Gomes Chapel: Certain phenomena go from invisible to “duh” obvious once they’re pointed out to you. Finishing the first-floor slab will produce one of those: It will strengthen the Bonney center foundation such that the trenches along the front and back of the building can be backfilled.

And that will make hundreds of square yards of ground usable again on what is a very cramped construction site. “It’s going to be a big milestone — getting full access to the building from all sides will be great,” Streifel says.

Nursing the Chapel: Across the Historic Quad at the Peter J. Gomes Chapel, the restoration of exterior masonry and the replacement of precast window traceries is progressing. The side facing the quad is essentially finished, reports Shelby Burgau, Facility Services project manager for the chapel, with just finishing touches and cleanup remaining. 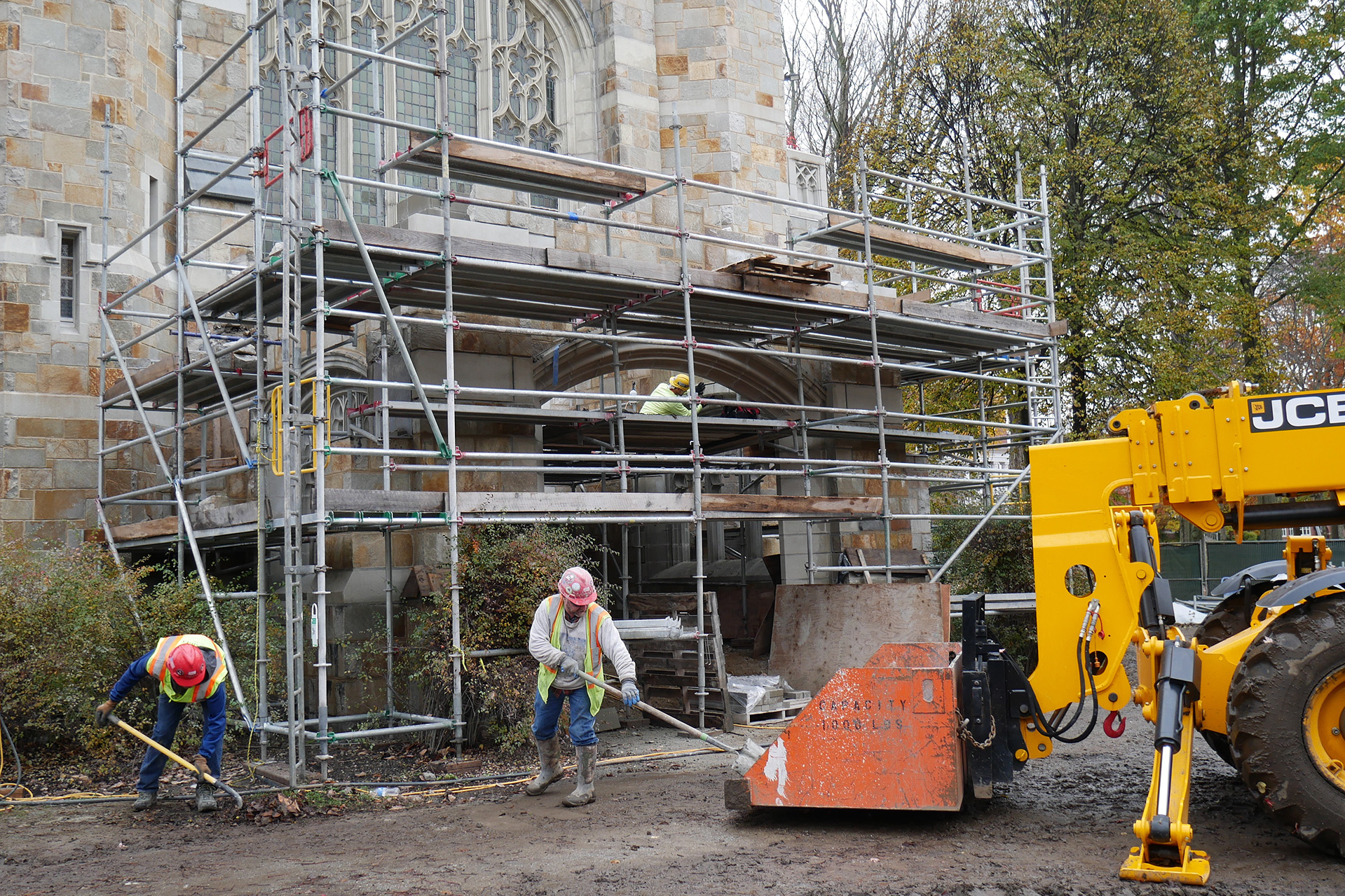 Cleaning up around the Gomes Chapel portico on Oct. 30, 2019. Note the new arch at center — much of the exterior masonry on the portico has been renewed. The floor and roof will be replaced next spring or summer. (Doug Hubley/Bates College)

On the west or College Street side, there’s still a fair amount of masonry work outstanding, as well as the installation of the new traceries, the viney-looking ornamentation that surrounds the window openings.

At the south, east, and west building entrances, the steps have been removed and will be replaced with precast concrete units. And after a few months of looking quite forlorn, the chapel’s signature portico has regained most of its masonry cladding, including a brand-new precast arch over the outer portal. That’s a single unit, but scored and tinted to look like several stones.

Finally, Burgau notes that while the construction fence will remain in place, the chapel will go quiet before too long, dozing in its swaddles of plywood and plastic sheet. Project management firm Consigli Construction will demobilize for the winter “as soon as the weather is no longer favorable, so probably mid-December,” she says.

“By that point, the goal is to have all of the restoration on both the east and the west sides complete, outside of the stained glass installation.” Watch for the glass next spring.

Can we talk? Campus Construction Update welcomes your questions and comments about current, past, future, and imaginary construction at Bates. Write to dhubley@bates.edu, putting “Campus Construction” or “WHO NEEDS A MEGAPHONE?!?” in the subject line. 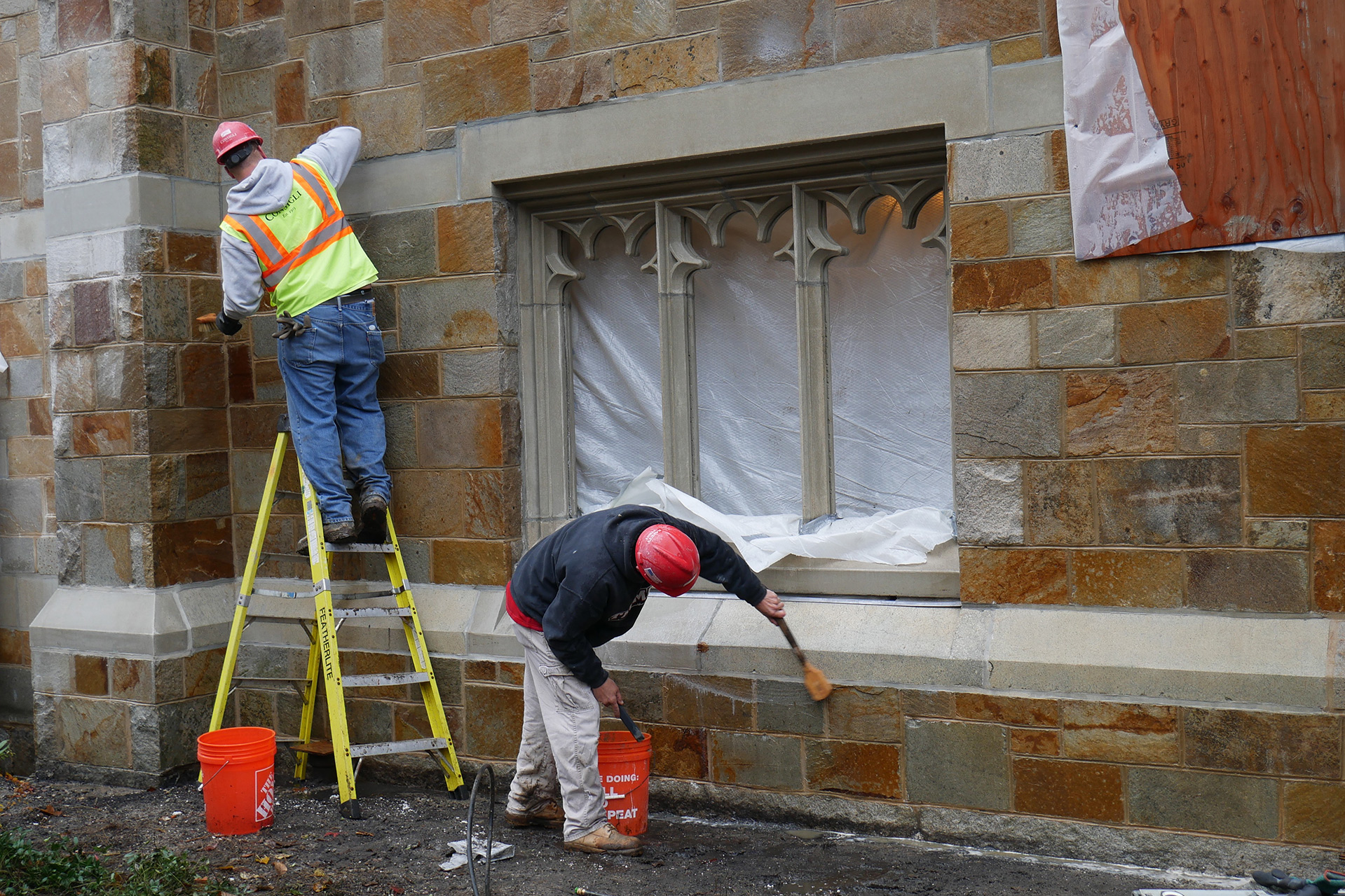 Cleaning up newly restored masonry on the east, or quad-facing, side of Gomes Chapel. All the masonry on this side has been repointed, and deteriorating pieces — notably among the precast band courses — have been repaired or replaced. (Doug Hubley/Bates College)