A rhetoric major at Bates and a student of that department’s late, legendary professor Robert Branham, Rynecki returned to campus this week at the invitation of a rhetoric class — students organizing the 2019 Bates Film Festival.

Produced by students in professor Jonathan Cavallero’s course “Film Festival Studies,” the BFF was the latest festival to screen Rynecki’s 2018 documentary, Chasing Portraits. The film recounts her efforts over two decades to track down artwork created by her great-grandfather, a prolific observer of his Jewish community in pre-war Poland, and then lost during World War II.

“It all started at Bates for me, and this film is linked together with that,” says Rynecki. “I had always loved documentary film, and Branham just stoked that interest from angles that I had never really thought about before.” 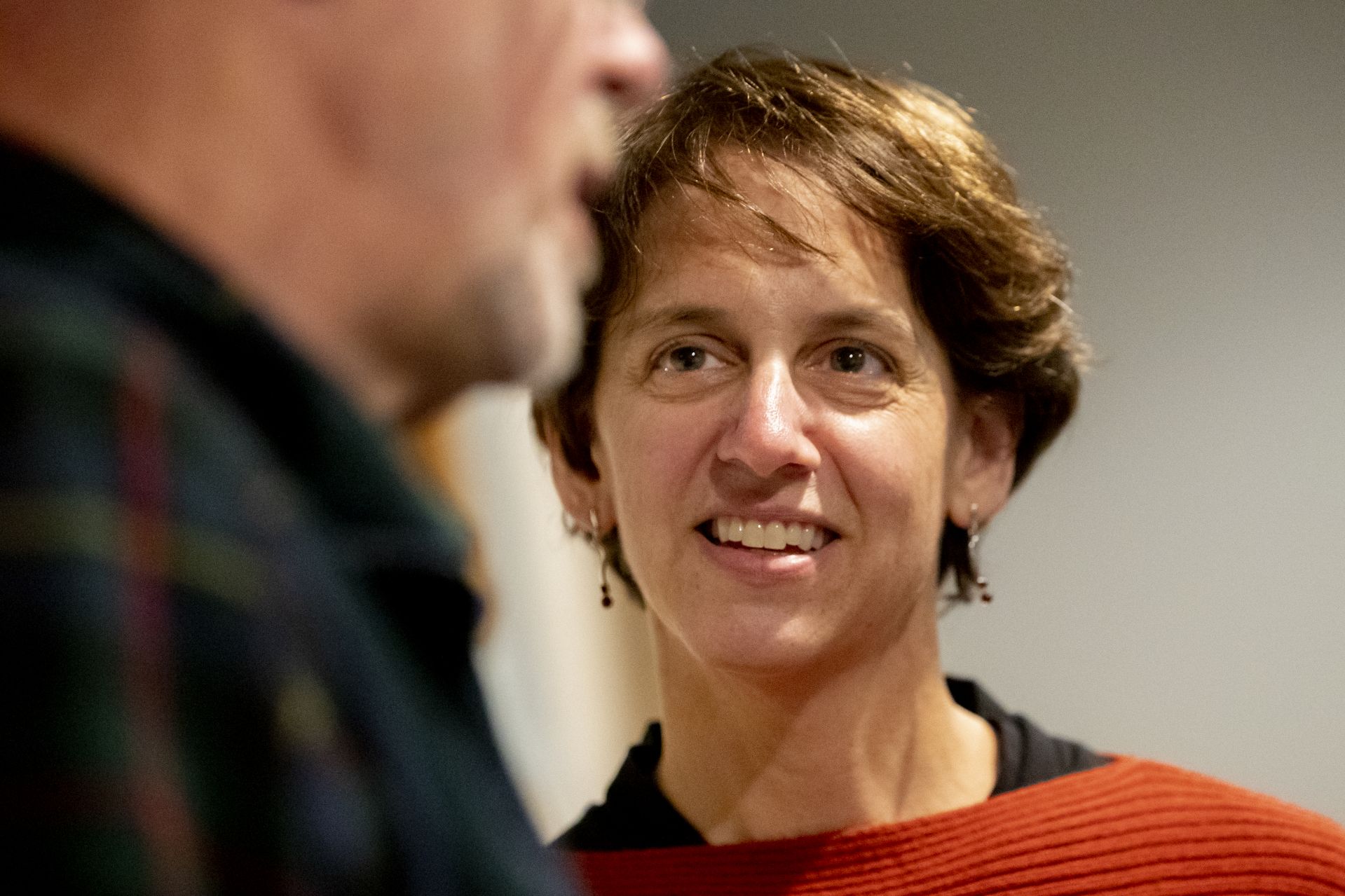 Elizabeth Rynecki ’91 catches up with Bill Hiss ’66 before the screening of her film Chasing Portraits in Olin 104. (Phyllis Graber Jensen/Bates College)

The film is a companion piece to Rynecki’s 2016 book, Chasing Portraits: A Great-Granddaughter’s Quest for Her Lost Art Legacy, a memoir that Kirkus called a “wonderful story beautifully told.” As she was growing up in northern California, the Rynecki home was filled with artwork by her great-grandfather Moshe Rynecki. The paintings depicted people at work and play, in family settings, during religious observances and celebrations.

Moshe produced some 800 paintings. At the outbreak of World War II, he stashed caches of the work with people he knew around Warsaw, sharing the paintings’ whereabouts only with his wife, Perla, and son, George.

When the Nazis imprisoned Warsaw’s Jews in the infamous Warsaw Ghetto, Moshe chose to “stay with his people” (in George’s words) and go into the ghetto, while the rest of the family went into hiding elsewhere in the city. Moshe is believed to have perished in the Majdanek death camp after the 1943 Ghetto Uprising.

Perla and George, along with George’s wife and son — Elizabeth’s father, Alex — survived the war. At war’s end, with Warsaw in ruins, Perla was able to recover only one group of 120 paintings. 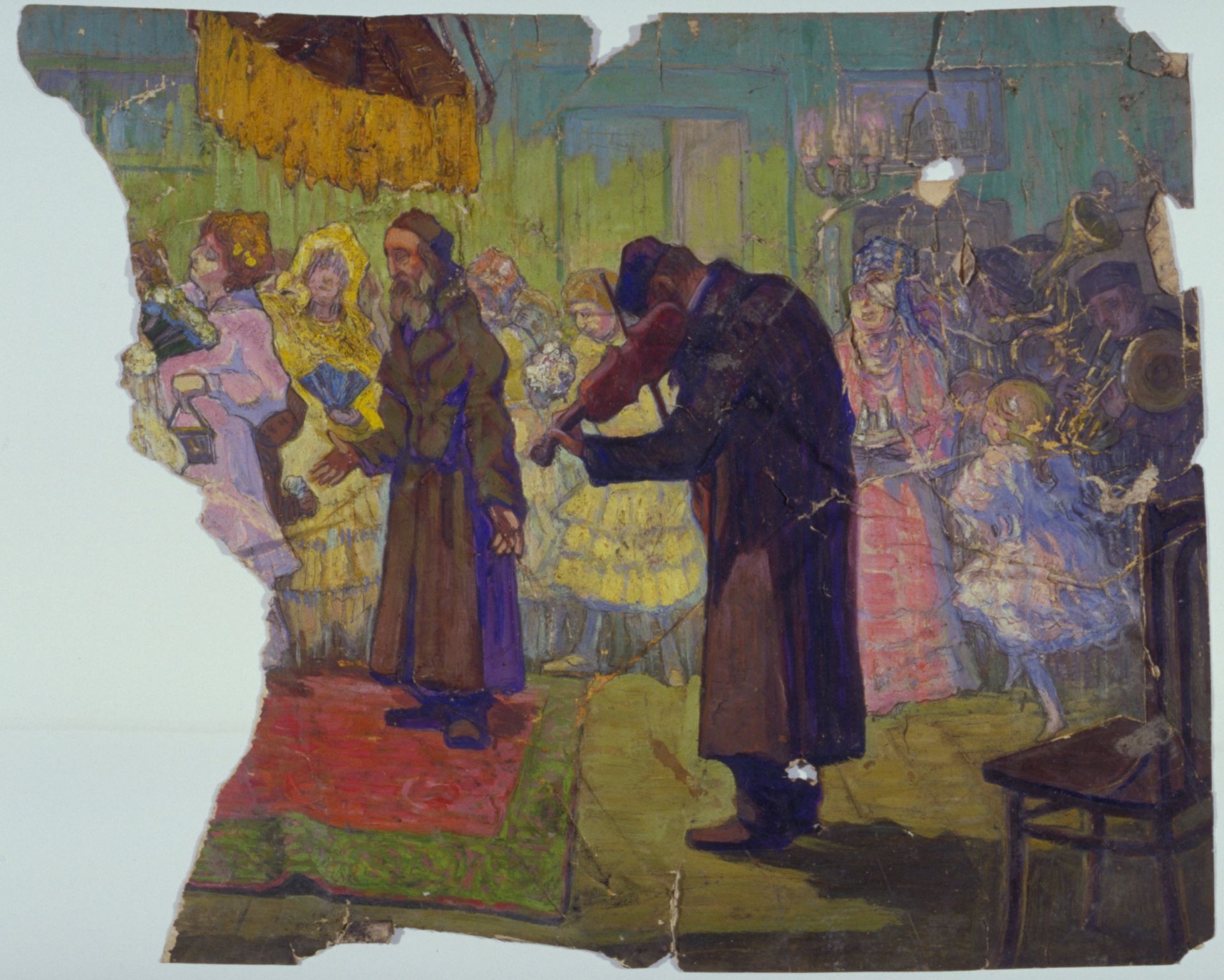 Moshe Rynecki’s painting of a wedding tells its story despite the damage inflicted on it.

In 1999, Elizabeth built an online gallery of the rescued paintings, believing those were the only artworks of Moshe’s to survive the war. But to her surprise, the website sparked responses from collectors and curators who knew about dozens of other surviving works.

Her book and film depict both her international quest to visit and document as many of those paintings as she could, and the family dynamics around Moshe’s art. The film, in particular, “isn’t about the Holocaust,” she explains. “It’s the aftermath, intergenerational trauma, relationships, and genealogy. It’s a very specific family history, but it’s also a microcosm of one person’s history against a larger world history.”

She adds, “My great-grandfather was not a famous artist, but he was a known artist in Warsaw in the ’20s and ’30s. He wanted to be an artist of merit. So to be able to carry that work forward makes me proud. And I’m grateful to those who have been excited to learn about it.” 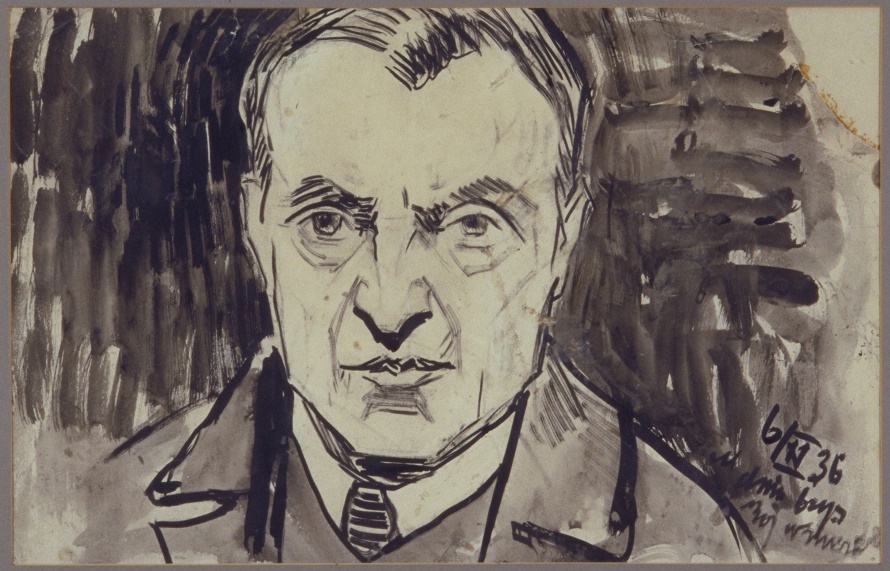 A self-portrait by Moshe Rynecki.

We spoke with Rynecki a few hours before she presented Chasing Portraits to the BFF audience.

How did Chasing Portraits, book and film, come about?

My grandpa George wrote a collection of vignettes of his memories of life in Poland up to and through the war. And in it he says, “I’m writing this, if for no other reason, than for my granddaughter Elizabeth to know the truth and not to be afraid of it.”

He died in February of ’92. And I was living in Washington, D.C., when the United States Holocaust Memorial Museum opened there, in 1993. And then I went to grad school for rhetoric at UC Davis, and wrote my thesis about how children of Holocaust survivors fit within Holocaust discourse.

And so all of these pieces came together. I felt this obligation to my family to record this history that they had not really wanted to talk about, but I didn’t know how to do that. And when I realized that the paintings were survivors that could not speak, and that I could speak for them and tell their history, that was really the linchpin of deciding that Chasing Portraits needed to move forward.

The only people who can bear witness are the survivors themselves. So those of us who didn’t exactly experience that history but nonetheless were impacted by it, how do we articulate that? And as the survivors are dying, there’s this struggle and rush to make sure that next generations learn this history, and how do we do that? 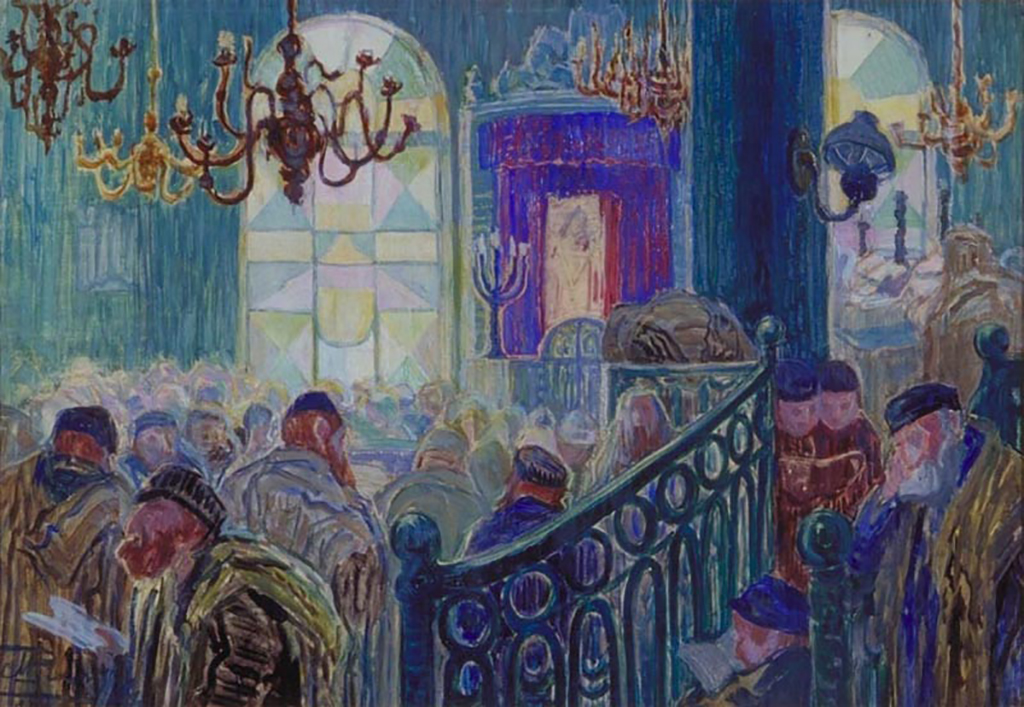 A scene in a synagogue, painted by Moshe Rynecki.

When you studied rhetoric here, the curriculum encompassed film, and now the department is even named “Rhetoric, Film, and Screen Studies.” How did a rhetoric background support writing and directing your film?

I could not have made my film without the amazing team of people that I worked with. I don’t have the skills and expertise. But I knew what all the pieces were and what all the stories were. Because of my Bates rhetoric background, I understood and saw things in ways that were different than I might have otherwise.

How do the book and the film relate to each other?

Probably the first half of the book tells more of the history, drawn from my grandpa George’s memoir. And then my quest picks up, and the book tells the story of my experiences.

I never wanted to make a Holocaust film, so the film is a contemporary story. And something very interesting happened in the editing room. I came with 100-plus hours of footage, and I said, “Here are all these pieces and I don’t really know how they go together, but here’s the general sense of what’s going on.”

My consulting editor, Josh Peterson, was the editor on a project about the Nazis’ systematic looting of art across Europe. So he really understood the art story and he said, “Yes, this is an art story for sure. But what really frames the story is your relationship with your father.” 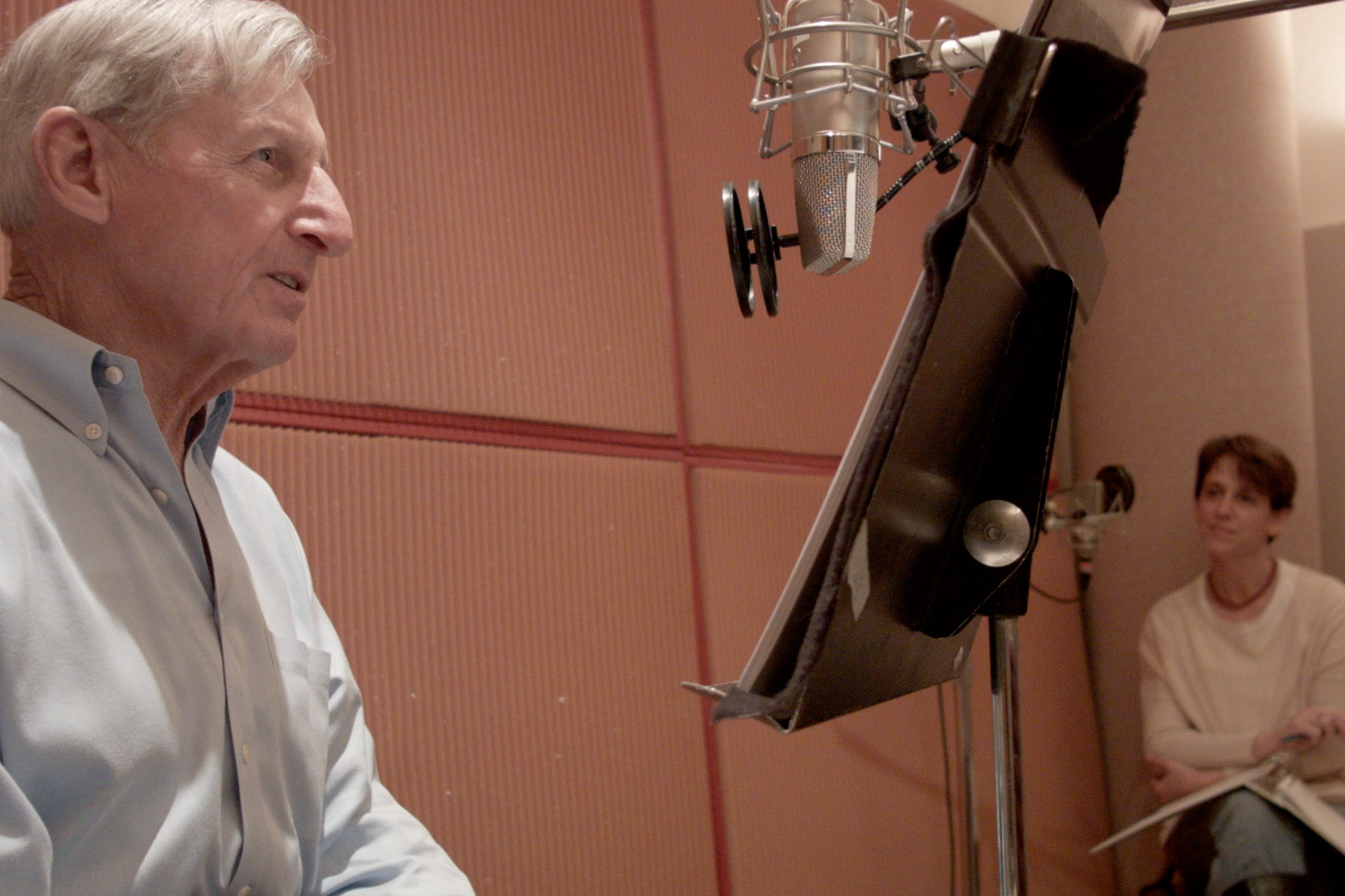 Elizabeth and her father, Alex, in the recording studio. (Sławomir Grünberg)

If my father was sitting here, he would be delightful and charming. But if you asked him to recall wartime events, in history and emotions, he would deflect. He just does not like to talk about it. Plus he doesn’t really remember a lot — he was 9 when the war ended.

Between the art by Moshe that Perla found and the pieces that have turned up since, you have seen about 200 of his images. What are a couple that are especially meaningful to you?

I’m always fascinated by his self-portraits. My great-grandfather grew up in a religious family, but he lived a much more secular life. What’s really interesting is that he created these really religious scenes, and they’re very accurate. And yet, when he paints himself, he paints himself as a classically Western male. 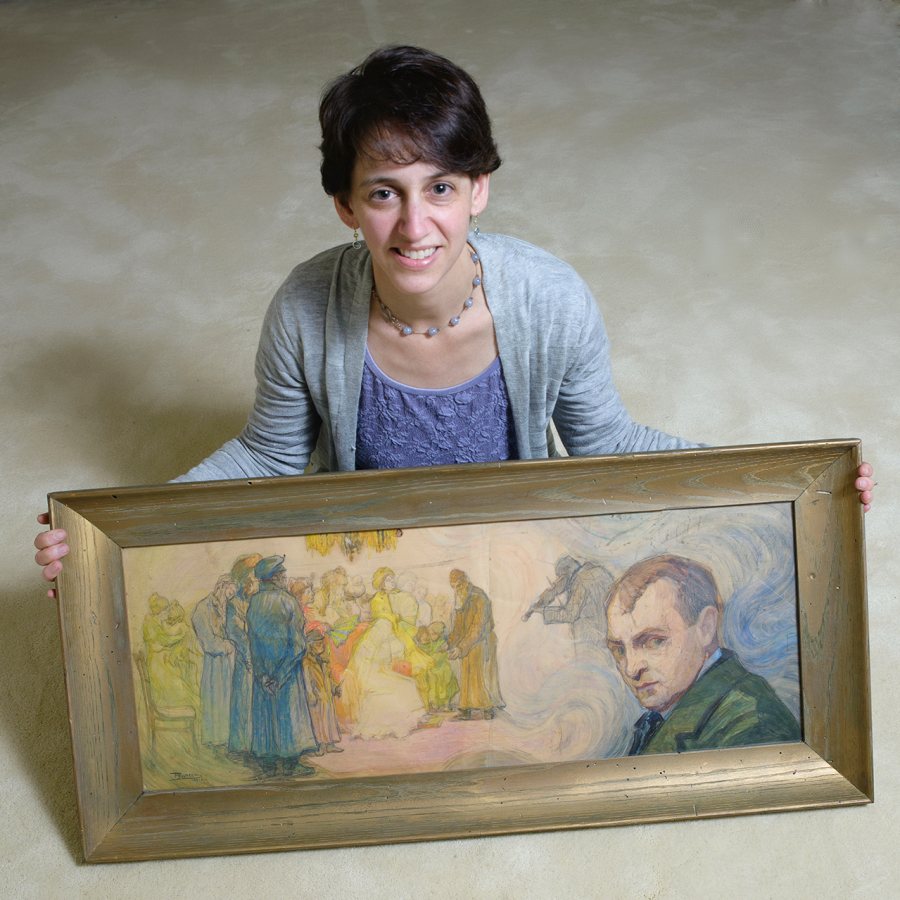 Elizabeth Rynecki ’91 poses with a painting by her great-grandfather Moshe Rynecki — a self-portrait that situates the artist beside, but not part of, a wedding ceremony. (Shoey Sindel Photography)

So there’s one big painting that’s mostly a wedding scene, but my great-grandfather’s off to the side, and he’s looking right at us. So it’s interesting: Here’s this religious and important cultural family moment — and I don’t know who is in the wedding — and he has one foot in each world, and that painting really symbolizes that.

Another one, Luna Park, shows people at an amusement park in Warsaw. And what draws me to that painting is that, when we think about Jews and Poland, and Eastern Europe in general, we mostly think about all of those who were murdered. And we should know that.

But before you focus just on the death and the destruction and the loss, you need to know what was there before — a vibrant community. Warsaw was called the “Paris of the East,” and in the movie, my dad says something like, “It was the apex of that world.” What I love about that painting is that it shows this thriving community.

You can love a super famous painting that’s in a museum, but it’s different to have a really emotional tie with a painting. And at one point I say in the movie, “My great grandfather’s paintings are more than things to me. They’re actually a physical link to him.” He painted them, he touched and held those canvases. And that, to me, is an incredibly powerful experience and emotion. 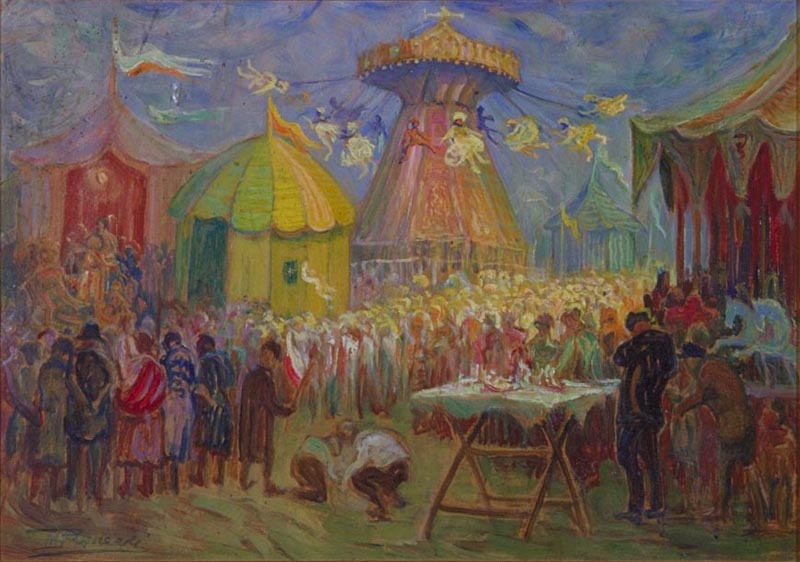