Since winter arrived, progress on the restoration of the Peter J. Gomes Chapel has taken place mostly out of the public eye, concealed within the chapel’s gray granite walls and the gray plywood and poly sheeting that cover the window openings.

It’s been good progress on the inside. The biggest news involves the building’s prominent stained glass windows on the east and west walls, seven pictorial groupings in all, which were dismantled for extensive repair last year. (An eighth window on the western or College Street side, depicting poet Dante Alighieri and artist Fra Angelico, was restored during an earlier phase of renovation and has remained in place through the current project.)

The repair involves both the stained glass windows themselves and the ornate concrete frames, known as traceries, that both hold the windows and give them still more visual pizzazz. 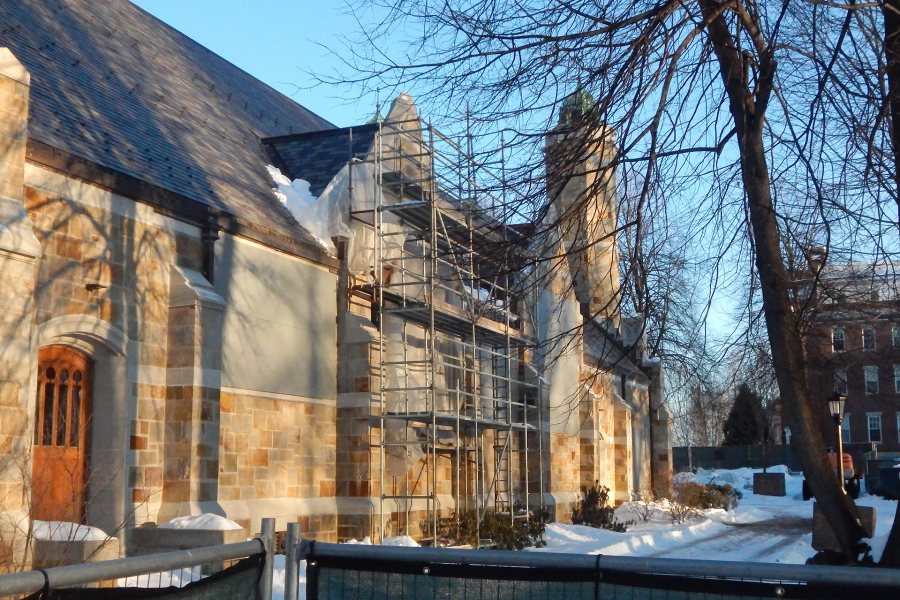 The tracery work was finished in December. It was a high-tech process that involved making three-dimensional digital scans of the traceries, creating molds from the scans, and casting replicas of the originals. Now, with the replicas in place, all that’s left is for a wall craftsman for Consigli Construction, the firm leading the restoration, to repair paint and plaster that was disturbed during the project. That’s happening now.

As for the stained glass, the original panels have been rebuilt and their re-installation is underway. (As a refresher for readers who, like Campus Construction Update, like to dazzle friends with arcane construction terms, the glass panels are secured into channels in the tracery edges that are called rabbets.)

The glass work is in the hands of Vintage Glass Works of Lisbon Falls, Maine, who took over the job from the original subcontractor. Jim Nutting ’76, also known for his original creations with Maine Art Glass, has rebuilt the glass panels, and the installation is being done by Matthew Kendall. 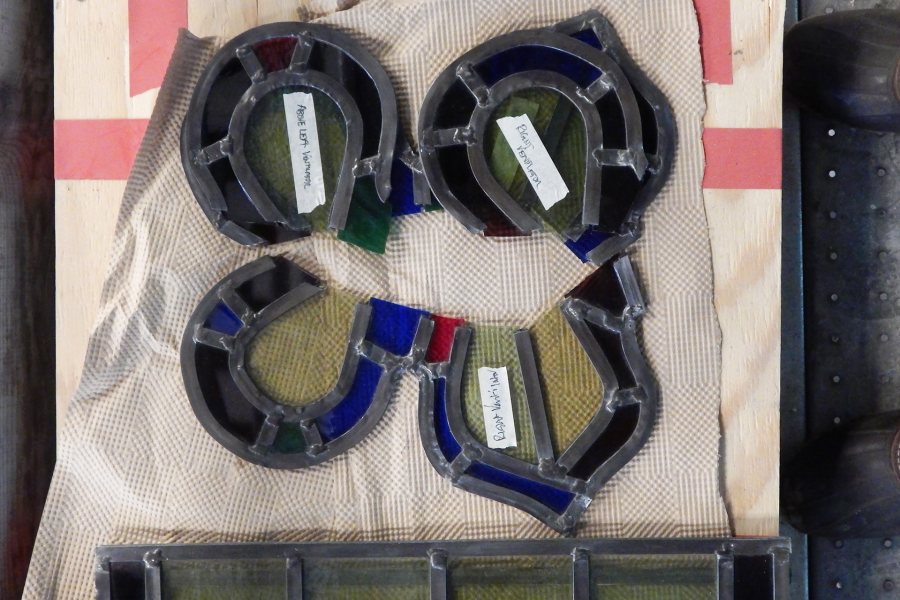 Kendall will be zigzagging back and forth between those east and west windows. A large arched unit on the east, facing the Historic Quad, is partially in place and can be finished now that an order of metal supports has arrived. Restoration of a western window has also begun, explains Shelby Burgau, who manages the Gomes project for Bates Facility Services.

But after a certain point the emphasis will be back on the eastern glass, so that the chapel can show its best face to the Historic Quad for Commencement, on May 31. In any case, the east and west windows will be essentially done by summer. Exterior masonry work on those walls was wrapped up in December.

Then Consigli masons and Vintage Glass artisans will turn their attentions to the north and south exterior walls and windows. 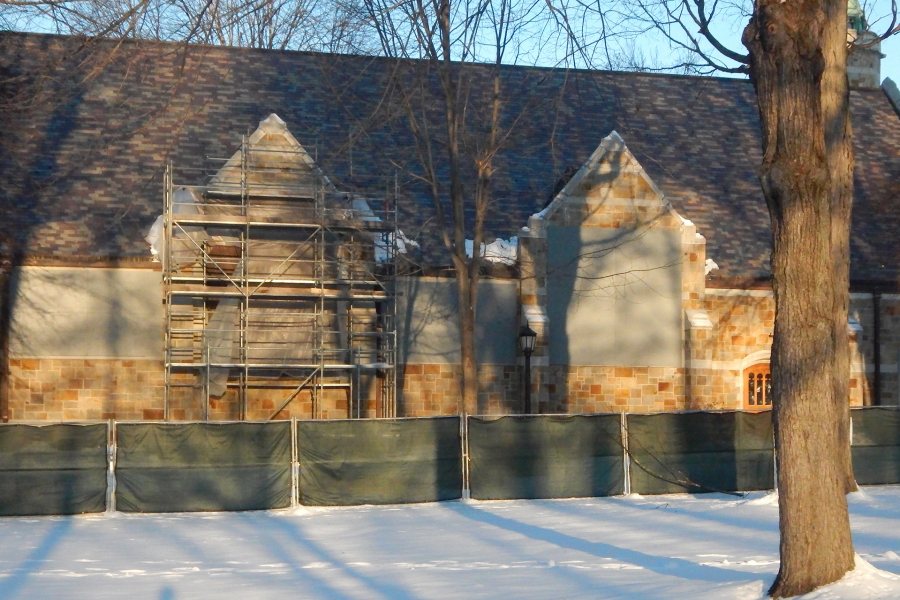 Plastic sheeting and plywood protect the Gomes Chapel window openings while the stained-glass windows are being restored. (Doug Hubley/Bates College)

There’s one major ornamental window in each of those walls, and the southern specimen will be removed first. But the northern window will be by far the more complicated restoration job, as it involves lots of small glass elements, many of them hand-painted. The removal and reinstallation require a close collaboration between Matt Kendall and Consigli masonry foreman Keith Lyford.

Speaking of traceries, another milestone has been passed in the renewal of the portico that shelters the building’s main entrance: The two traceries that embellish its unglazed side windows have been replaced. Now swathed in poly sheeting, the portico awaits only a new roof and steps. These will come along next summer.

Now you see it, now you don’t: Building the first-story walls at the Bonney Science Center hasn’t been an erratic process, but one might be forgiven for thinking otherwise. 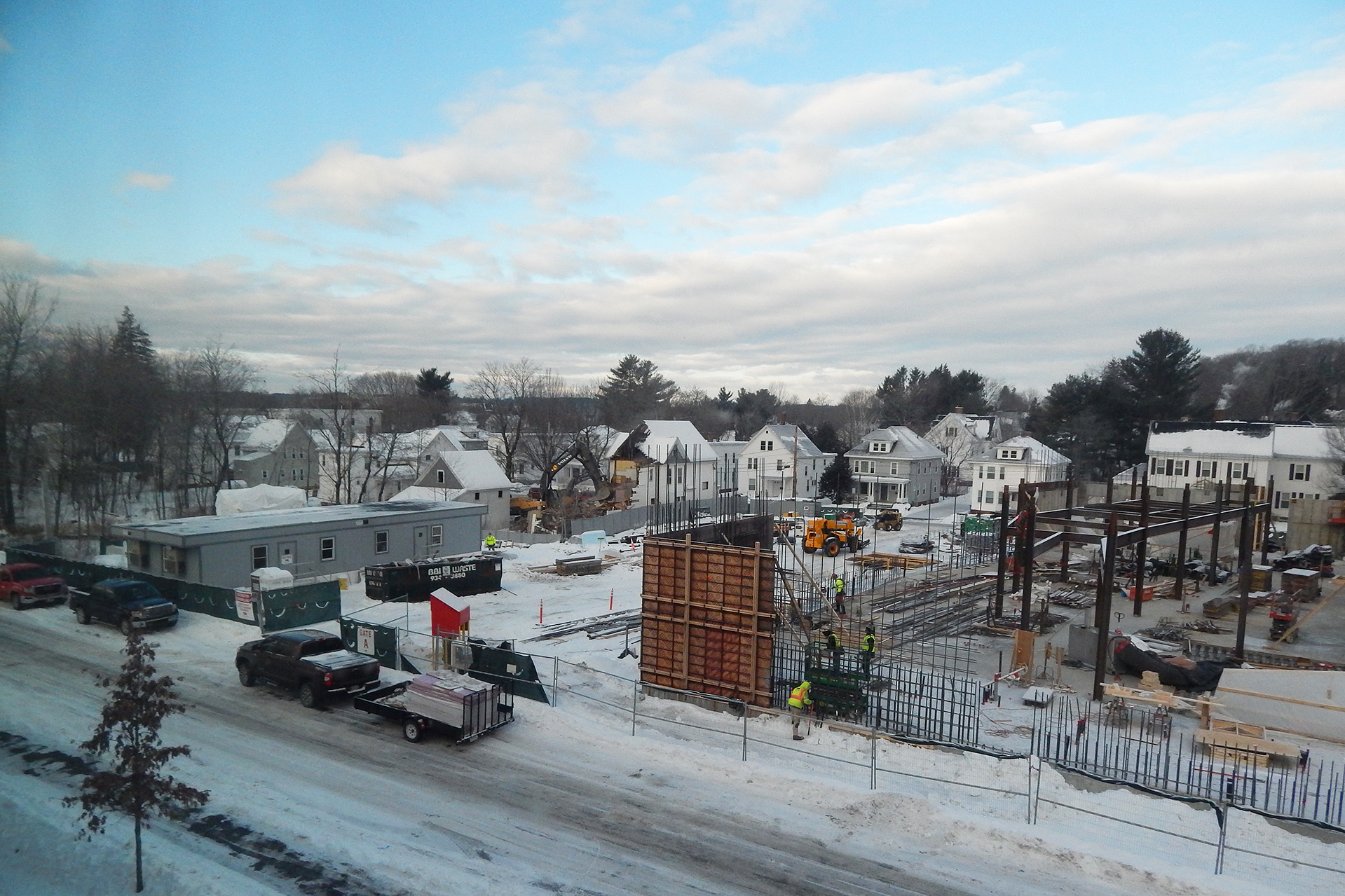 Taken from the third-floor of Chu Hall, facing the Bonney construction site from the east, this Jan. 7 view shows 137 Nichols St. being demolished at center and, nearer the camera, rodbusters assembling rebar for new wall sections at Bonney. (Doug Hubley/Bates College)

Where you’d expect the concrete wall to arise in an orderly and contiguous progression around the floor-slab perimeter, sections of wall instead have appeared at seemingly random intervals. There’s a long stretch of wall along the Campus Avenue side — but not the whole side. There’s a corner wall here and a corner there, but not at all four corners.

In fact, Campus Construction Update knows all about erratic, and what looks like a start-and-stop approach has actually been the construction team building walls at top speed.

“They wanted to get these walls going as soon as they could,” explains Bates project manager Chris Streifel. “The intent is to work consistently in one direction all the way around,” but wherever walls can’t yet be placed, “they’ve skipped and moved on to other areas.”

There are different reasons for the gaps, but a salient issue has to do with the building’s three entrances — one facing Campus Avenue, another on Nichols Street, and the third at the back or south side. Additional structure is needed around the entranceways, both above (such as a conspicuously complex and heavy steel fabrication that was finally installed the other day after weeks on the site) and beneath, where the entrances cross the foundation wall. 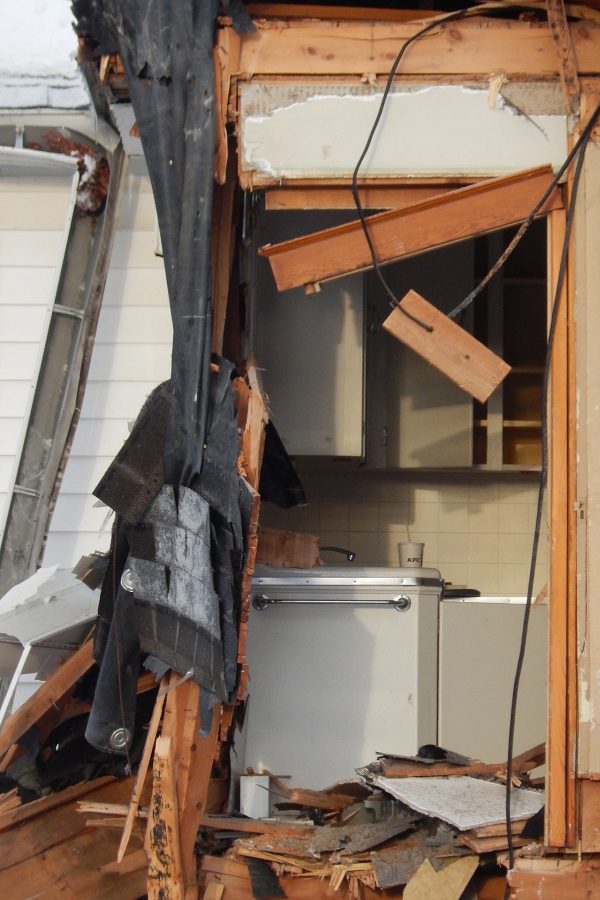 “We’ll come back and fill those wall gaps in the next few days,” Streifel said this week. “And my expectation is that when they get to the second and third floors, they’ll be able to go all the way around. It should be less hopping, skipping and jumping.” (And less confusion for Campus Construction Update!)

At any rate, enough wall was in place by the first full week of 2020 that steel workers from Davis Erectors, Sainte-Marie, Quebec, were back at Bonney by Wednesday to start spanning the wall-tops at the Nichols Street end of the building with joists that will support the second-story floor slab.

It’s a conservative estimate, Streifel allows, but he thinks that by the end of the month the first-story walls and the steelwork will be far enough along that floor decking for the second level can be laid. As we’ve described previously, the winter’s progress at Bonney will be kind of a chase as walls rise, steel is hung, floors are poured and the roundelay begins again, or at least up through the third and topmost level.

After the second-story concrete floor slab has been placed, Streifel adds, a thorough round of temporary weatherproofing will occur — meaning that poly membranes and other materials will be applied to seal up places where the elements can intrude.

“Then they’ll be able to start some of the mechanical installations, interior wall framing, and drywall work in the basement,” he says. “There’s a ton of work there, especially from an infrastructure standpoint. So that’ll be the next phase and I’m not expecting that until sometime in late February.”

While new walls are ascending at 45 Campus Ave., aka the science center, an old set of walls came down with a crash on Jan. 7. These were the walls of 137 Nichols St., a house adjacent to the Bonney construction site. (We fondly remember salving our writer’s block by gazing down at the old white house from the Campus Construction Update penthouse at 141 Nichols, now the location of storage units serving the Bonney project.) 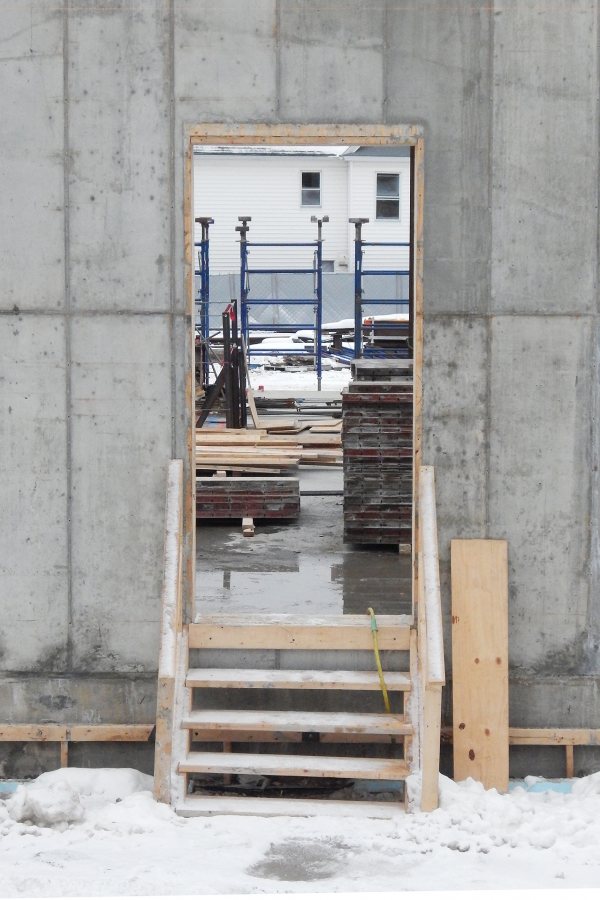 A view into the Bonney Science Center from Campus Avenue on Jan. 6, 2020. The house framed by the doorway, 137 Nichols St., was torn down the following day. (Doug Hubley/Bates College)

The college bought the 119-year-old residence a few years ago, and when it became vacant last year, razing No. 137 was the logical course. That’s partly because of the investment that would be required to keep it serviceable, and partly because of its close proximity to the Bonney site, literally three or four feet away.

That site is just barely big enough (and has, at times, not been big enough) for all that needs to be done and stored there, so part of the 137 Nichols lot, which totals around 9,500 square feet, will be turned over to the firm managing the Bonney construction, Consigli Construction of Portland, Maine.

“I don’t know exactly how they’ll use it,” Streifel says, “but it’ll give them some much-needed relief.”

And in the long run, the open space will provide some visual relief, or breathing room as Streifel puts it, for the neighborhood along the south side of Bates’ new multimillion-dollar science center.

Can we talk? Campus Construction Update welcomes your questions and comments about current, past, future, and current construction at Bates. Write to dhubley@bates.edu, putting “Campus Construction” or “Where is that crazy rabbet?” in the subject line.