Much warmer and a bit less snowy than many we’ve known, the Maine winter now ending has been a blessing to the Bonney Science Center construction team.

Completely apart from weather, the Bonney project was already facing a formidable challenge as winter began: the construction of the building’s walls and floors in an intricate, rigidly sequenced choreography of steel and concrete placement.

“While that was as challenging as expected, the lack of impact of this winter’s weather softened it a little bit,” said Chris Streifel, who manages the project for Bates Facility Services. “It helped keep us on schedule. It’s been a real benefit.” 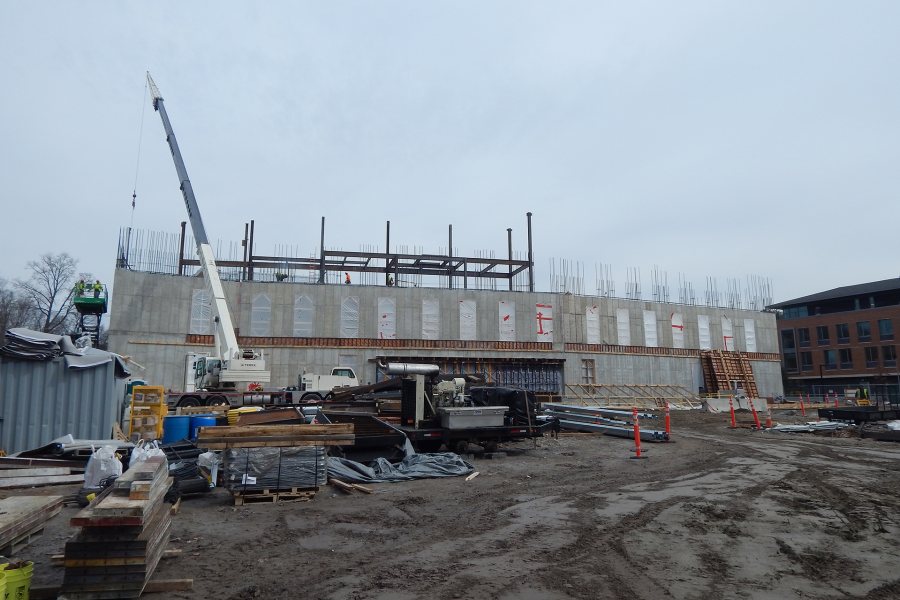 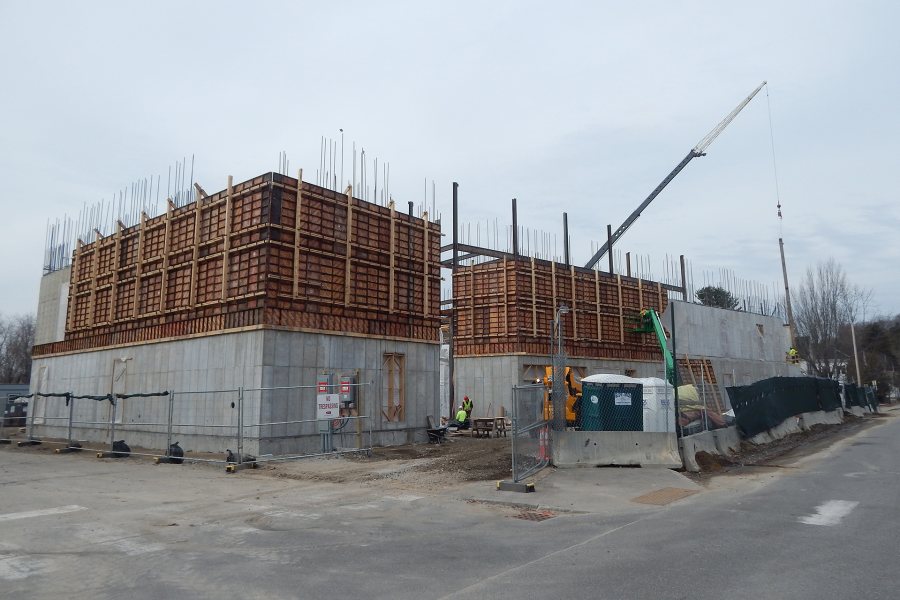 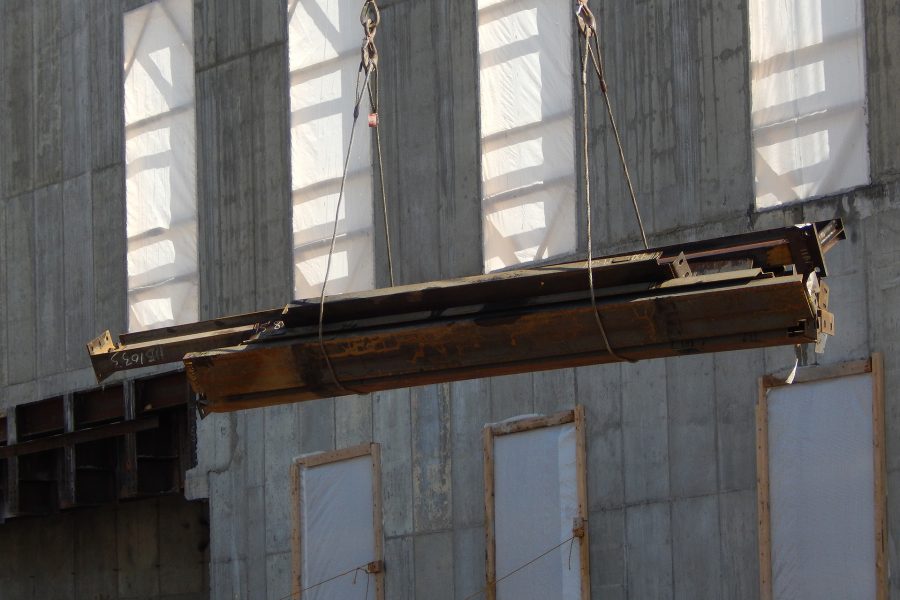 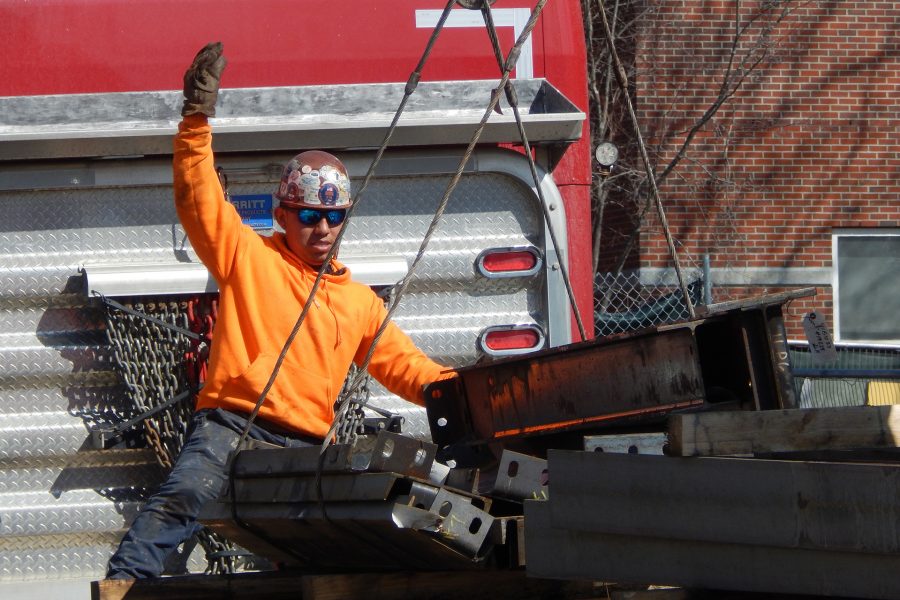 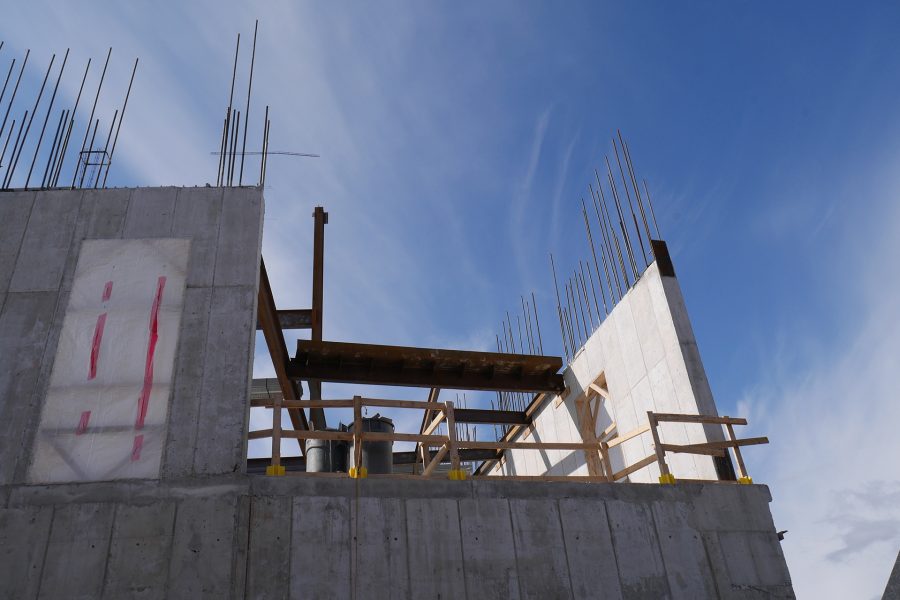 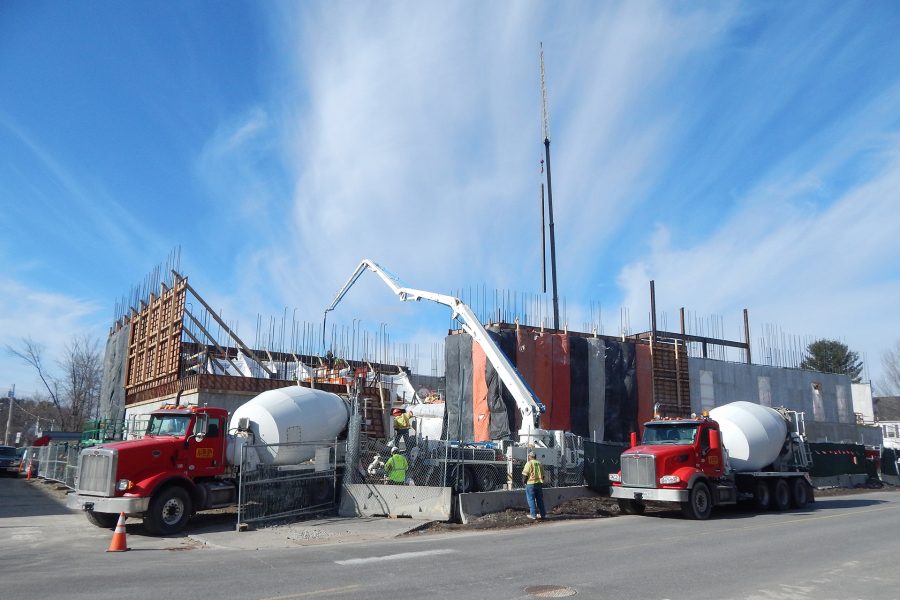 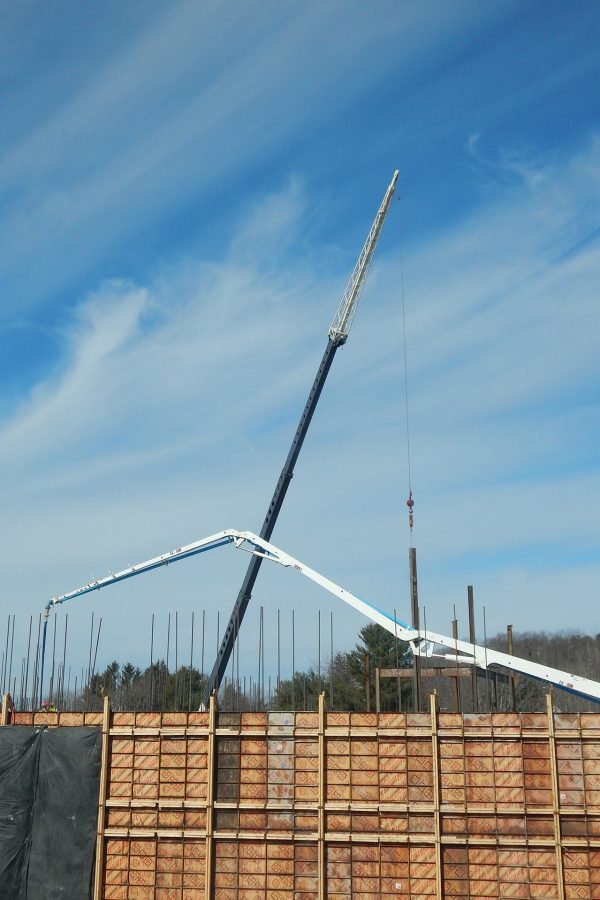 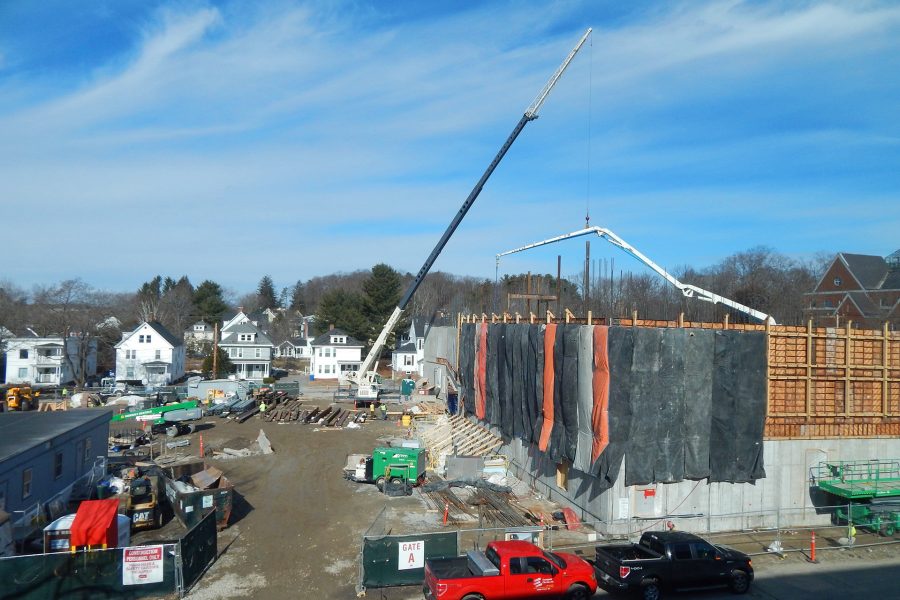 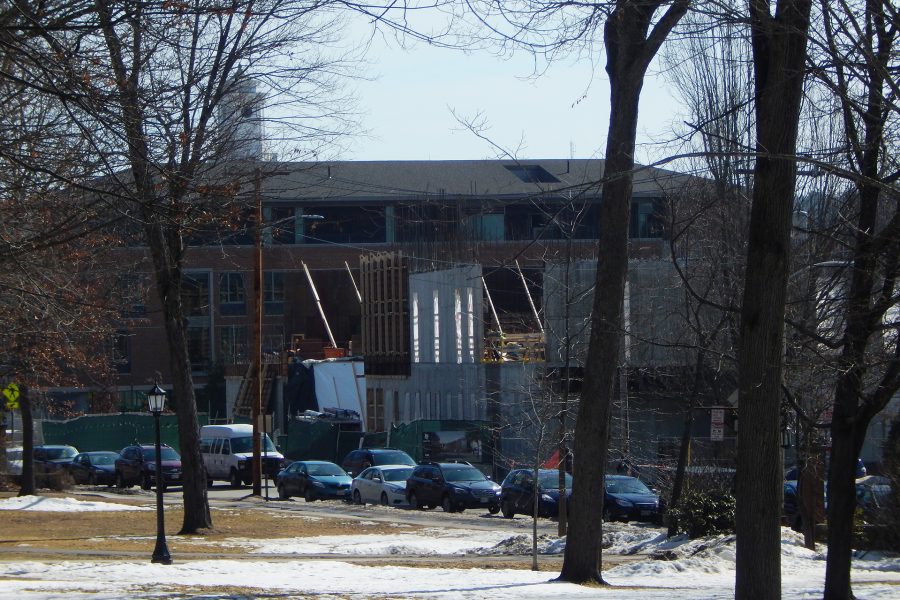 Streifel explained that snow and cold have presented only minor distractions to the trades at the forefront of wall and floor creation — carpenters, rebar experts, concrete pumpers, steelworkers. So, working their way around the building, those teams have been able to master the alternation between concrete and steel, floors and walls, and west side and east.

As Johnny Cash might have said, they’ve gotten rhythm, and the result has been steady progress.

“They’re hitting every floor as they’ve planned and hitting them right, not having to do little Saturday catch-ups,” Streifel told Campus Construction Update on March 9 — a day when Lewiston’s high temperature hit 64 degrees. “So things are just working very smoothly right now in this weather.”

When we toured the building about a month ago, the first-story floor and walls were all but done, and a good start had been made on the second-story equivalents. (If you’re wondering, the wall concrete at Bonney is 12 inches thick, and the floor slabs are seven.) Now those second-story components are nearly complete, and concrete for the remaining wall section, at the corner of Campus Avenue and Bardwell Street, is being placed today. 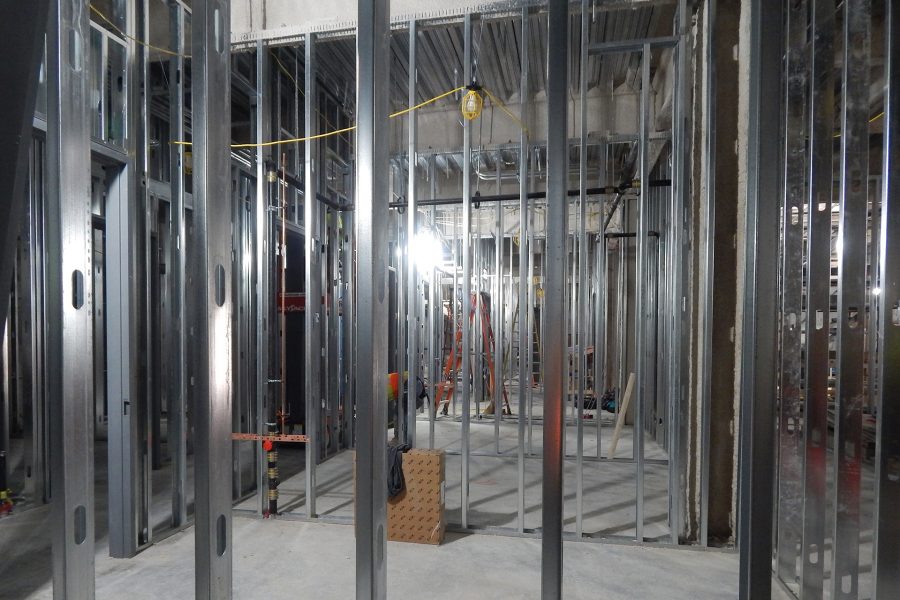 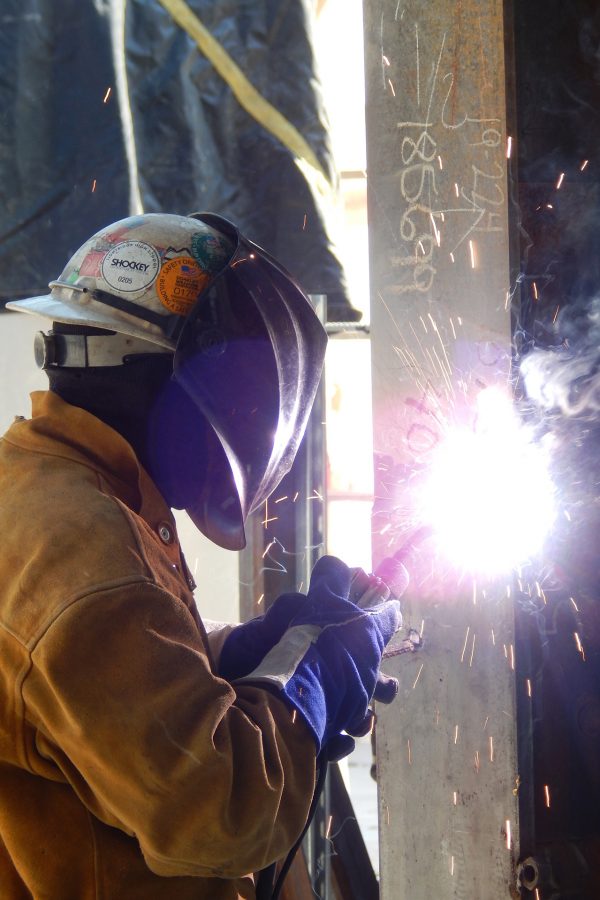 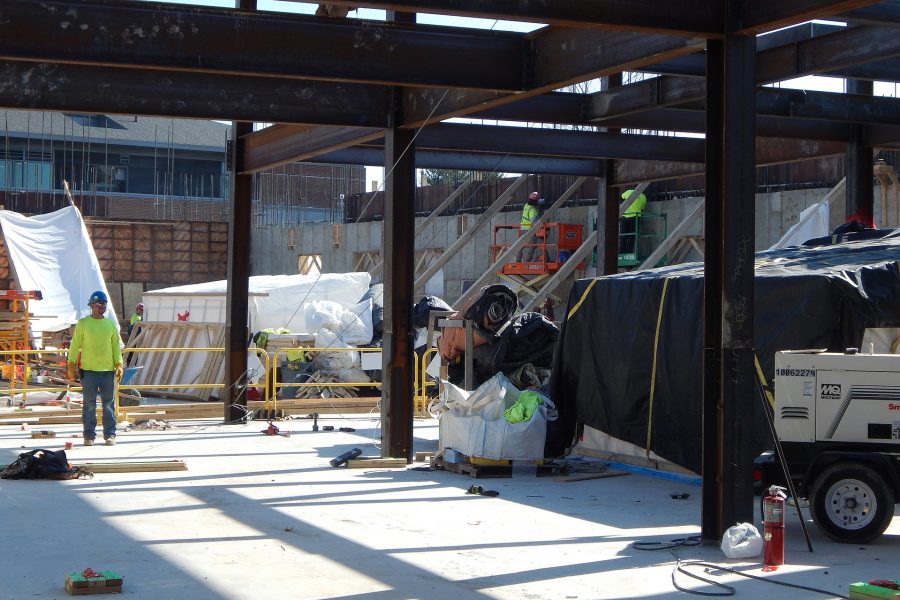 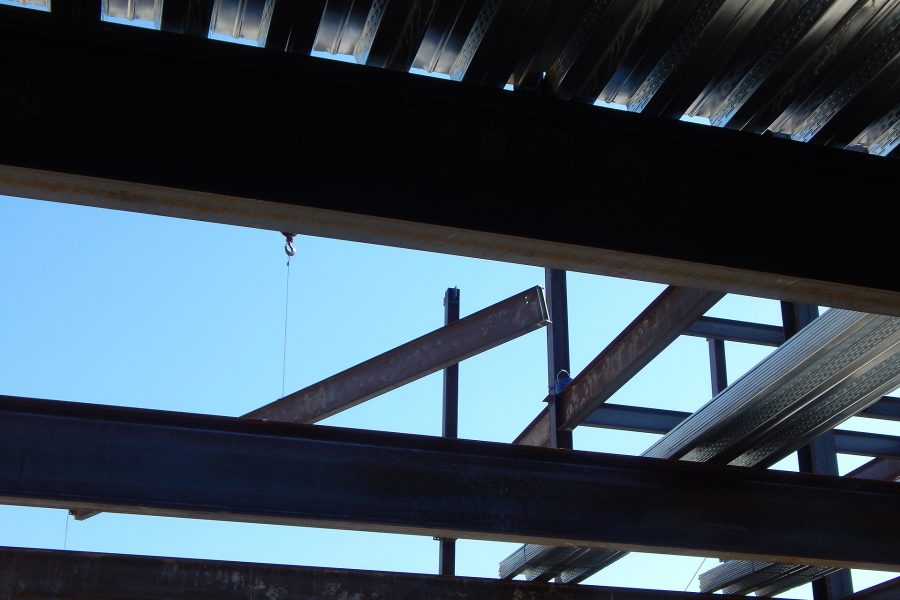 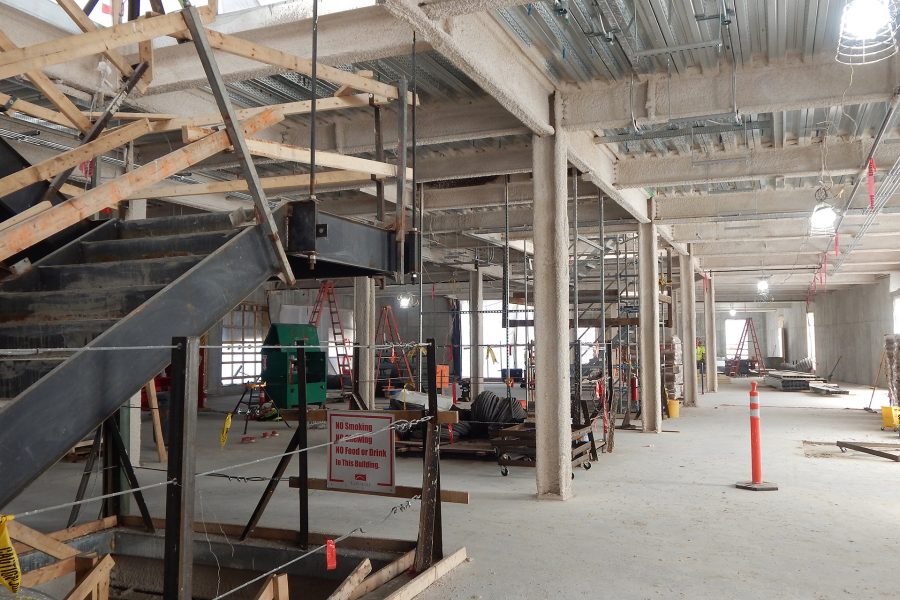 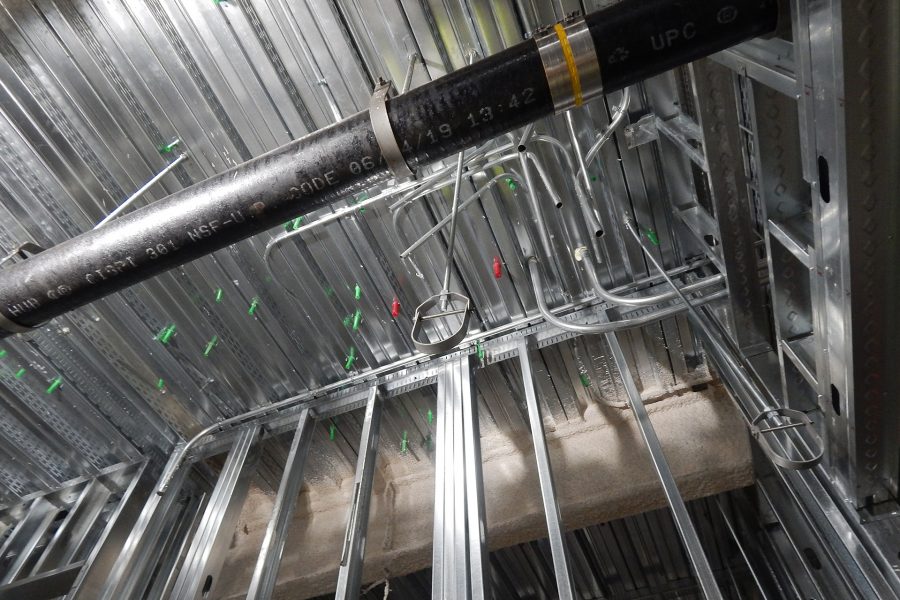 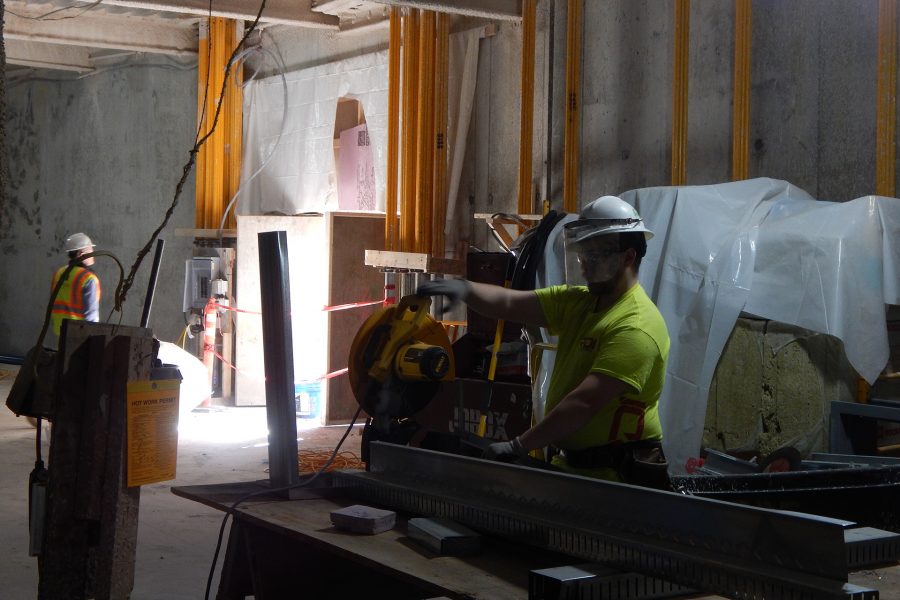 Meanwhile, Precision Steel of Sainte-Marie, Quebec, has been on site since last week placing third-story floor joists and deck, and hanging steel uprights. Incidentally, if you’re in the neighborhood, the length of those uprights will give you an idea of the building’s ultimate height, even with the third story and the topmost mechanical space, aka penthouse, still undone.

By the last full week of March, the west or Nichols Street end of the third-story floor slab should be in place. Also around that half of the building, rebar and forms for the concrete walls will be rising.

Symons says: We have been impressed enough by those wall forms, by the way, to pry ourselves out of the easy chair (metaphorically speaking — this is one comfy chair) and inform ourselves about them. The firm managing the Bonney project for Bates, Consigli Construction, is using the Symons Steel-Ply concrete forming system, said Matt Rose, Consigli superintendent for the project.

In general, wall forms for concrete consist of parallel rows of panels, plus supports, that create a wall-shaped channel into which, naturally, concrete is placed to make the wall. A proprietary arrangement of steel-braced plywood panels, fasteners, etc., the Symons system is an industry favorite thanks to its ease of use, durability, and versatility. 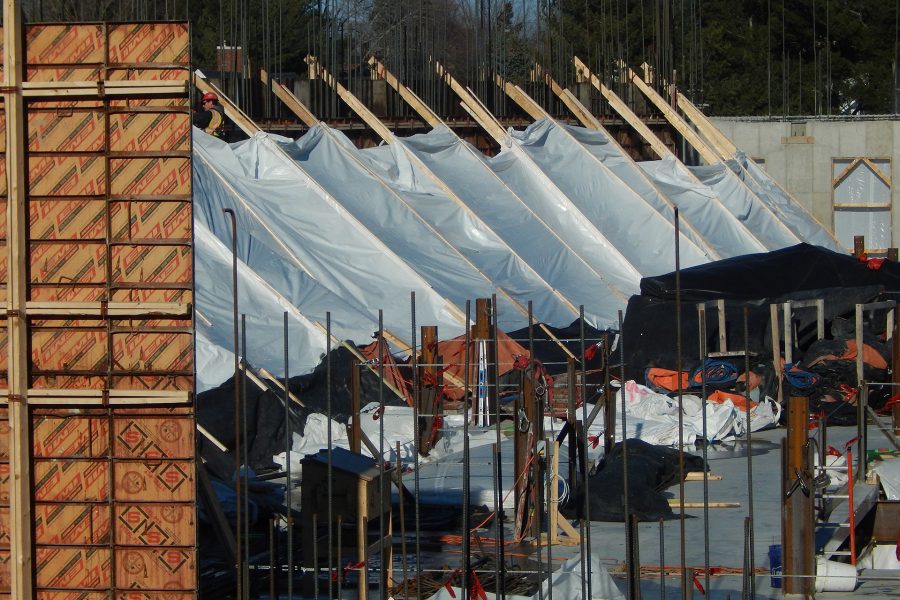 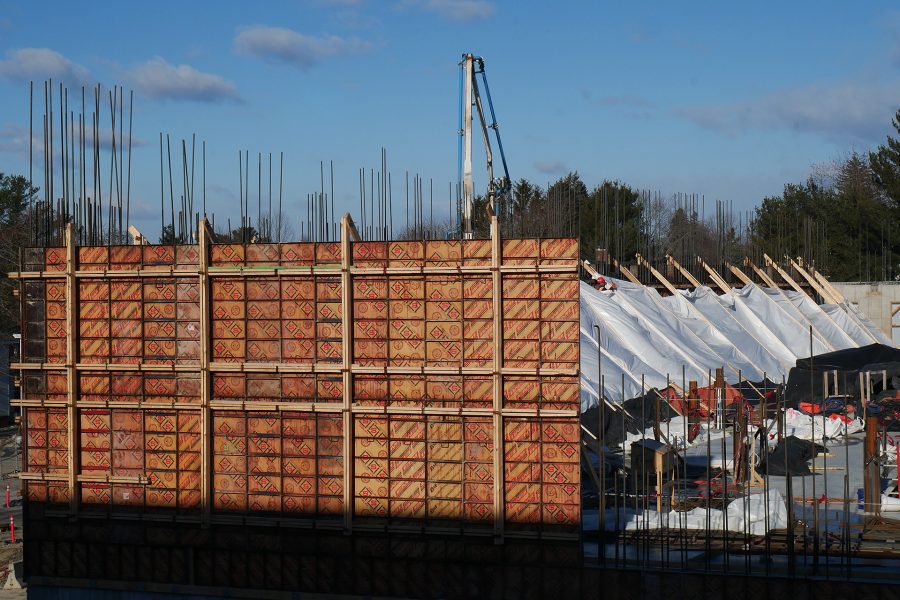 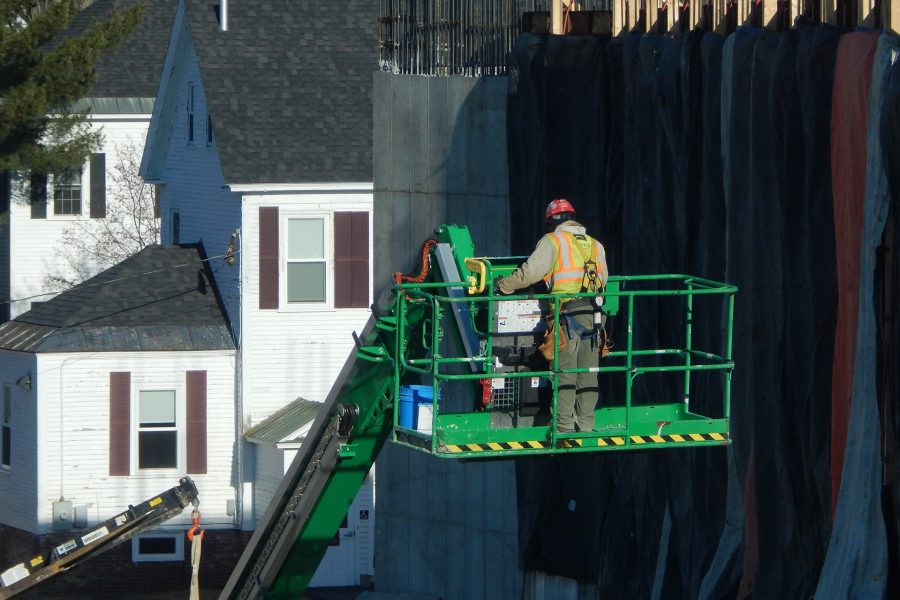 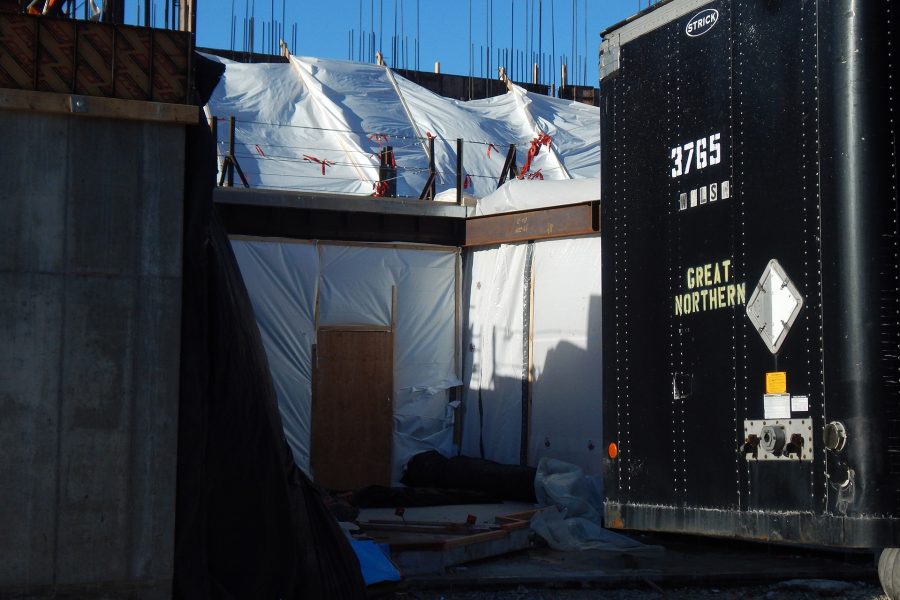 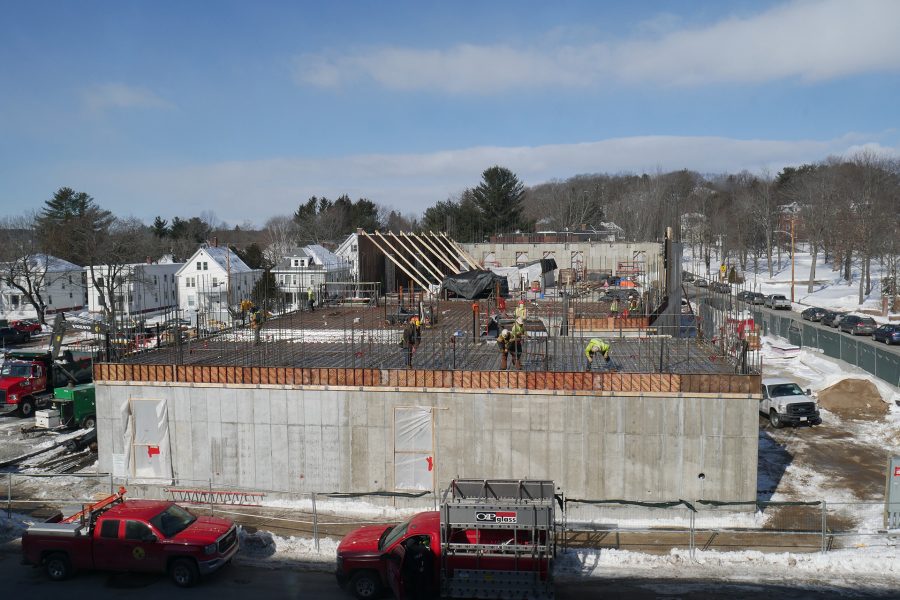 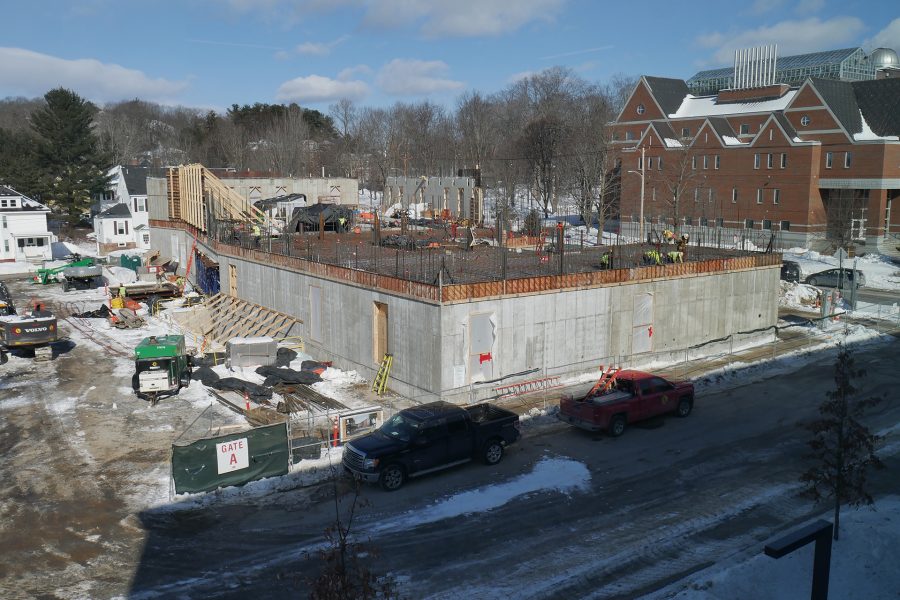 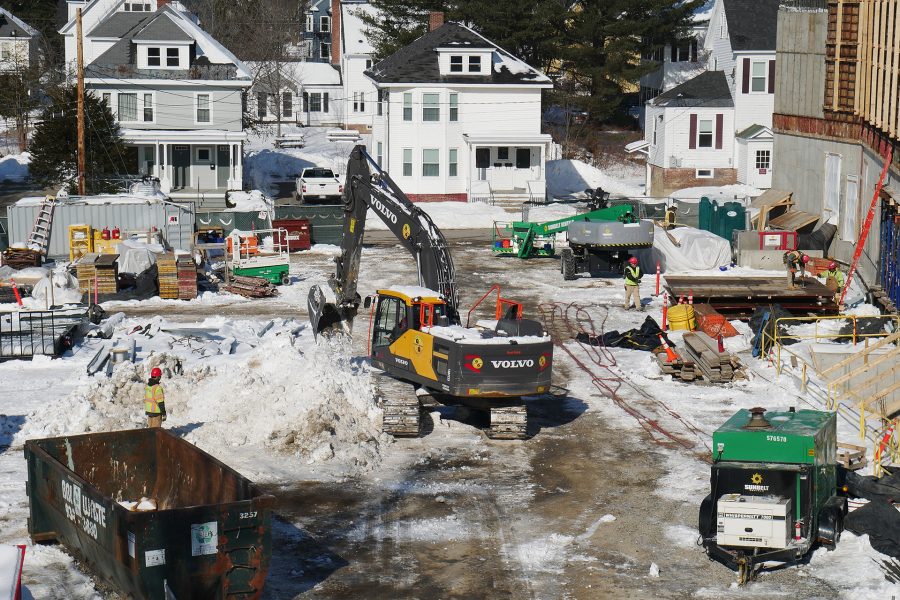 As Rose explained, a given panel is fastened to the panels on either side of it by steel pins — such a sequence being known as a “gang.” Linking outside and inside panels together across the channel are metal ties that are left in place when the concrete is pumped into the form. The ends of those ties can be broken off flush with the concrete surface when the panels are stripped off (stripping which is facilitated by oiling the forms before concrete is placed).

A selling point of the Symons system, according to a video produced by manufacturer Dayton Superior, is the toughness of its components, as the panels can be used up to 200 times and can last 20 years.

Floors show: March 9 was also the day for a tour of the Bonney building. It was a month to the day since our previous visit, and we were struck by the contrasts between the previous and the present occasions. February had had a watery theme — cool drizzle outside, puddles inside the science center.

Now warm and dry prevailed inside and out. Up on the second level, we took shelter under some third-floor decking as the shadows of girders swinging in by crane crossed the concrete. A steelworker dressed a seam with a torch, and carpenters on ladders fussed with window knockouts on a sunlit wall freshly stripped of its plywood panels.

During the February visit, the basement had been a wide-open expanse that would have been great for a rave or a paintball battle. But a month of progress on interior walls had transformed the space.

The northern half of the basement, bordering Campus Avenue, had become a jungle of metal wall studs, silvery slender slats that will ultimately support partition walls. They demarcate some 19 rooms that, for the most part, will constitute the vivarium, a signature feature of the new science center.

The studs make it possible to discern one room from the next, but it’s a visual challenge with all the studly repetition, not to mention the bare metal surfaces that scatter glare from the overhead work lights. And wallboard is still a ways off, as the subcontractors doing mechanical, electrical, and plumbing are busy with rough-ins — installing all the pipes, conduits, and cables that will live inside the wallboard and feed faucets, outlets, and lightswitches on the outside.

At the moment, the basement’s southern half serves as a work and storage area for the experts from Roland’s Drywall Inc., Warren Mechanical, and Enterprise Electric. It will ultimately serve as mechanical space whose equipment will include three air handlers that Bates project manager Streifel described as “massive, like nothing you’ve ever seen before at Bates.”

Up one flight, the first floor likewise presented a marked contrast to its February appearance. Thanks to the completion of the second-story floor slab overhead, it was now puddle-free. Layers of poly sheeting across windows and other openings held in the comfort that space heaters outside the walls pumped in through giant fabric ducts.

It was a place where a person could spend some time just kicking back and admiring the fireproofing newly applied to all the structural steel. Resembling oatmeal, this spray-on material effectively makes the steel more resistant to intense heat in the unlikely event of a building fire. The first-floor fireproofing had recently been finished and sacks of the stuff were stockpiled awaiting application on the upper levels.

At the moment, on the first floor, the only walls are the perimeter walls holding the building up. But before too long, the division of the space into rooms will begin here as well. During our visit, Bates construction administrator Jacob Kendall pointed out a course of slotted strips some 10 or 12 feet high on the perimeter walls. Where tracks are usually something that you leave behind you, these so-called stud tracks indicate that wall studs are on the way.

And following the wall-builders up into the space will be the mechanical, electrical, and plumbing specialists. “In the next two weeks,” Kendall said, “this will be looking like the basement.”

Can we talk? Campus Construction Update welcomes your questions and comments about current, past, future, and current construction at Bates. Write to dhubley@bates.edu, putting “Campus Construction” or “It doesn’t surprise me one little bit that you are bound to your comfy chair” in the subject line.