This edition of This Month at Bates pivots from one world into the next. We knew, but didn’t; anticipated, but couldn’t. Not really.

Perhaps these pictures provide a sense of how life changed on a dime, after the college suspended on-campus classes on March 13 due to the coronavirus global health crisis. On campus, we’re turning green but keeping socially distant.

Despite the seismic shift, we conclude our presentation with an upbeat image of connection.

We miss you all and send greetings of hope and wellness.⁣⁣ 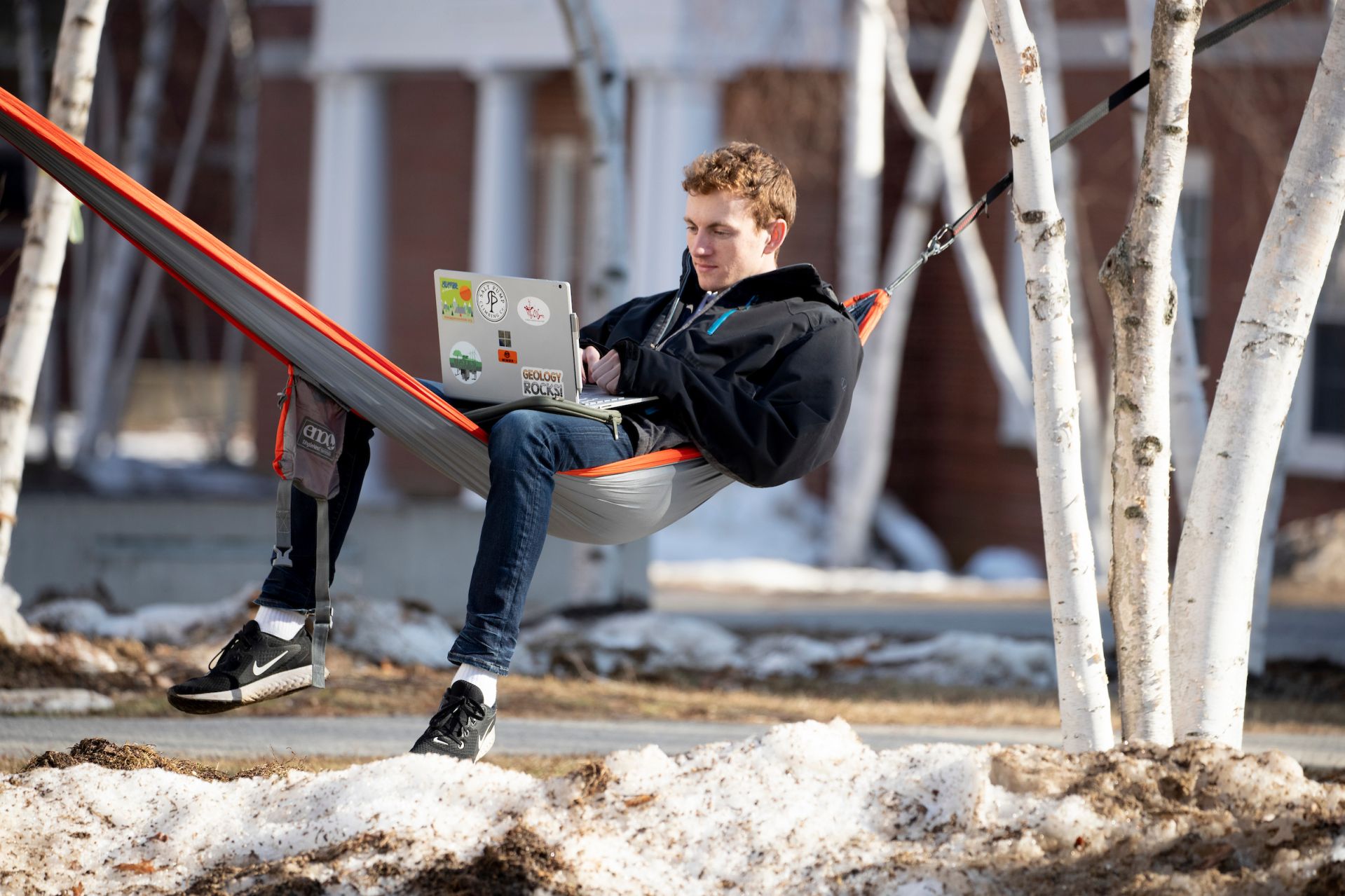 Sam Onion ’20, a geology major from Wayne, Maine, swings from a hammock on Alumni Walk as he looks for jobs on his laptop. “It’s a beautiful day,” he said about March 3, 2020. 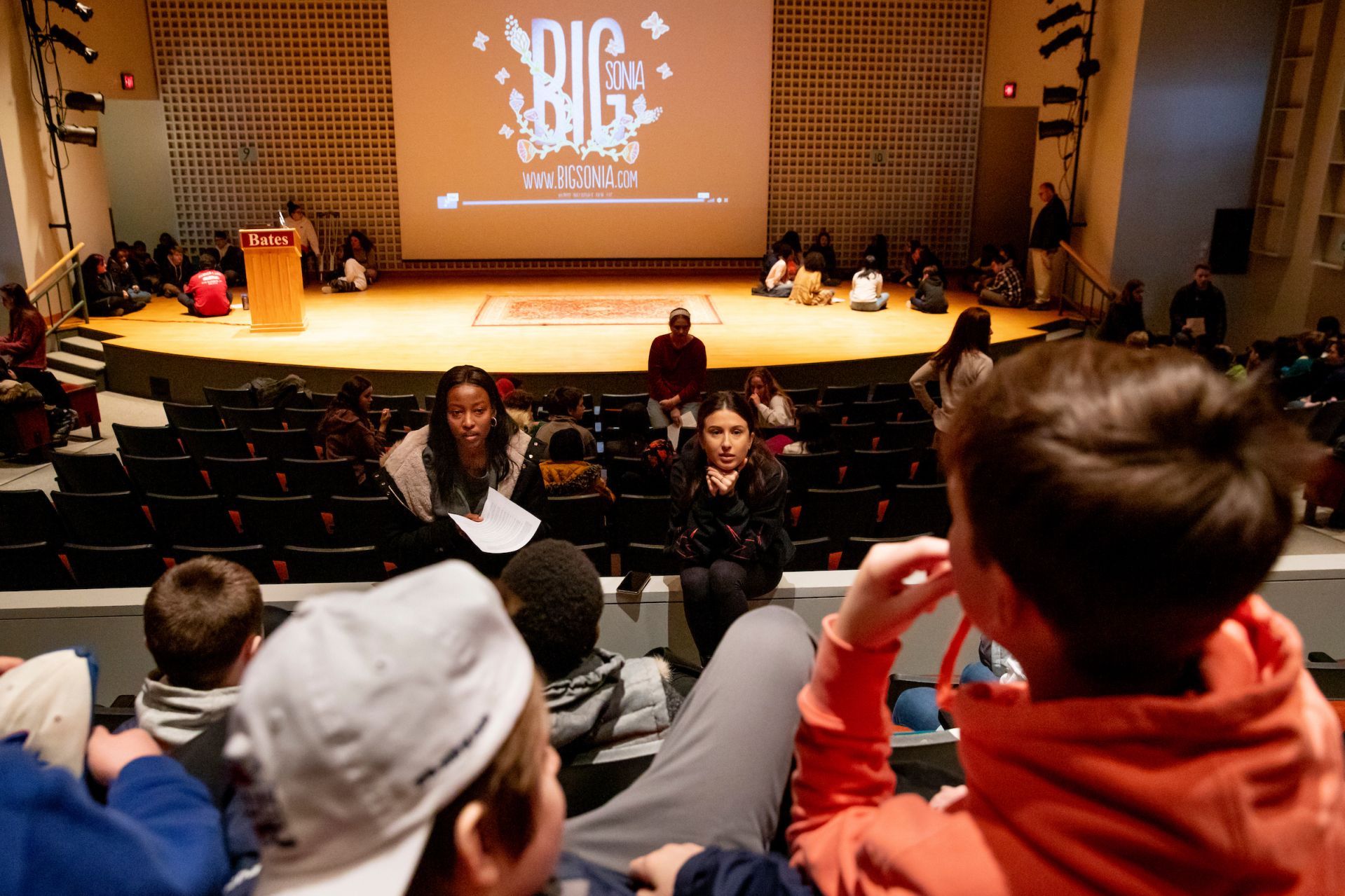 Part of Assistant Professor of Spanish Stephanie Pridgeon’s course looking at stories of the Jewish and Latinx Diaspora in the U.S., the screening was co-sponsored by the Harward Center for Community Partnerships and the Maine Jewish Film Festival. 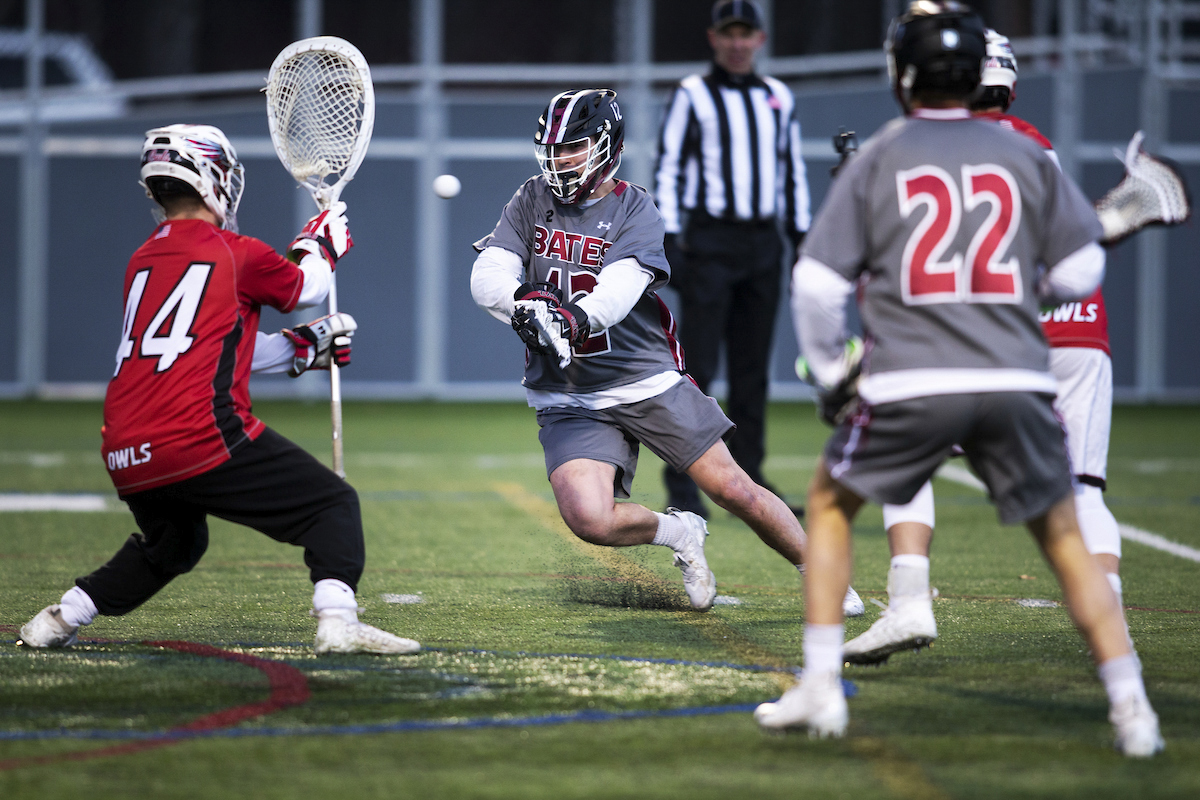 Jack Scribner ’21 of Falmouth, Maine, scored five goals and Chris Costello ’21 of Ridgefield, Conn., won 13 of 15 face-offs in the Bates men’s lacrosse team’s 14-4 win over Keene State on the evening of March 4 at Garcelon Field. It was the team’s first win — and last home game — of the season. 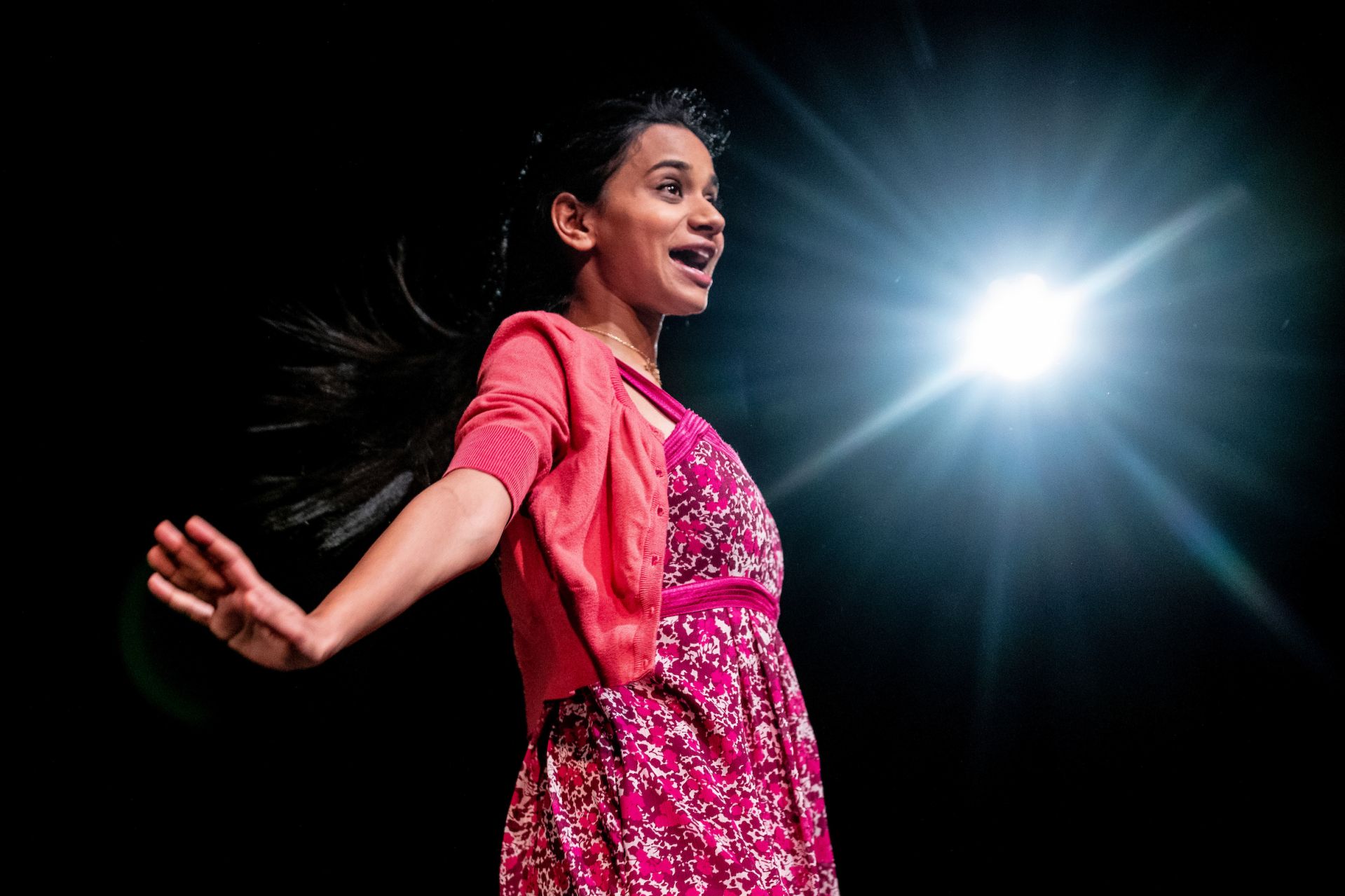 On March 4, Sukanya Shukla ’20 portrays Nina in Aaron Posner’s Stupid F#@king Bird, “sort of adapted” from The Seagull by Anton Chekhov, and directed by Tim Dugan, assistant professor of theater. Her performance was offered in partial fulfillment of the requirements for a senior thesis / capstone in theater. 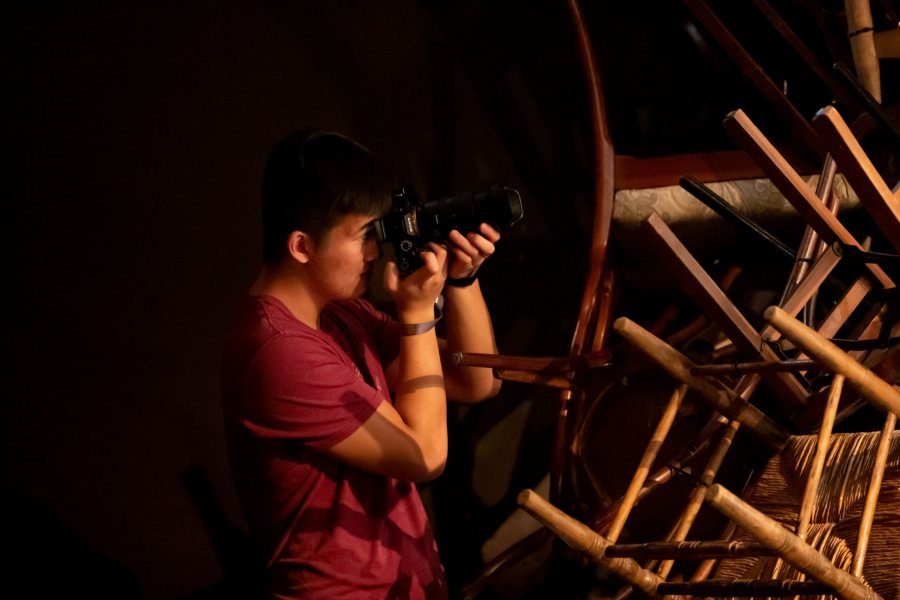 David Chen ’23 of Rockaway, N.J., a photographer for The Bates Student, uses part of the set for the play Stupid F#@king Bird to frame his image of the stage during the Schaeffer Theatre dress rehearsal on March 4. 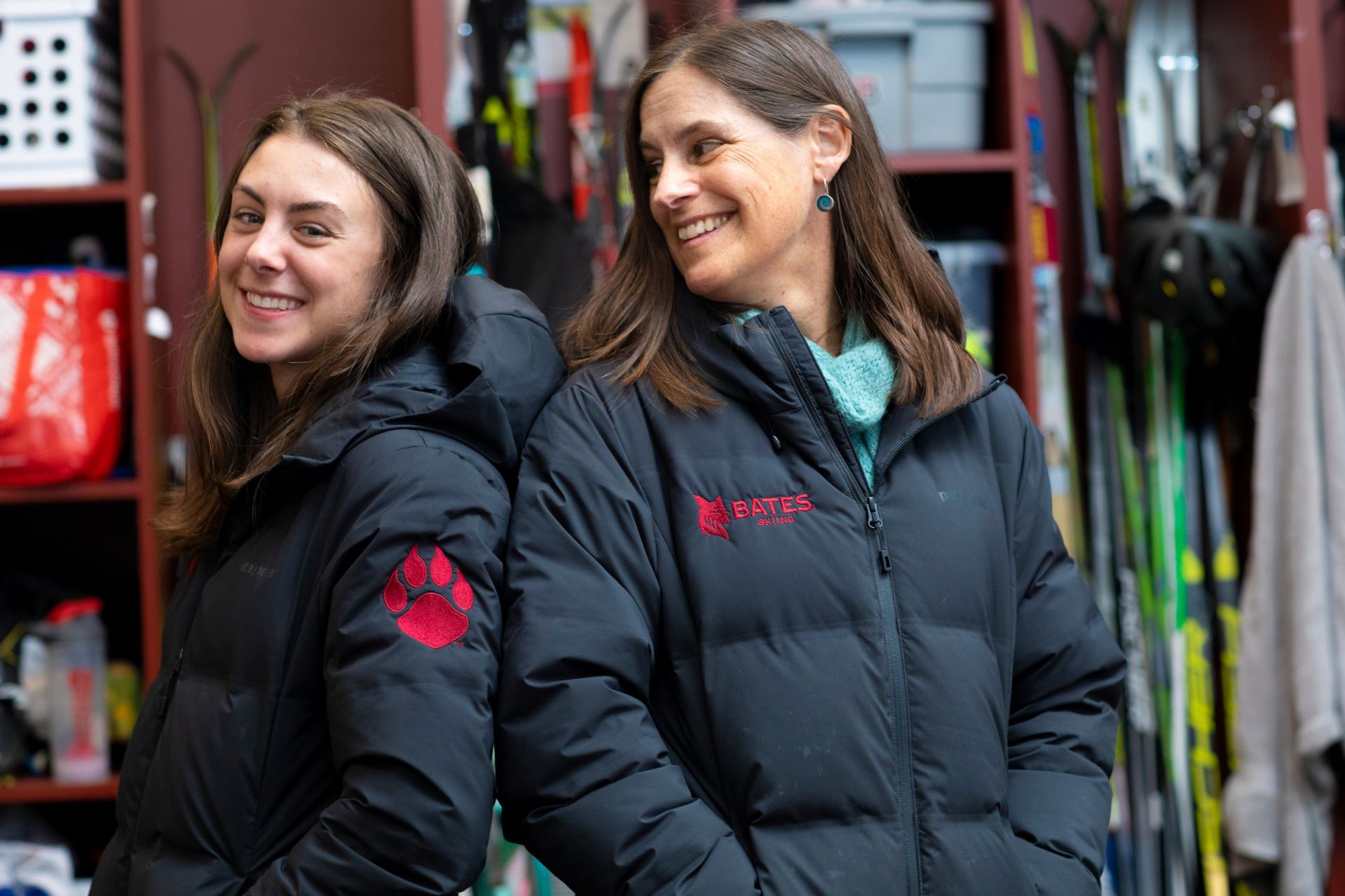 On March 5, Nordic skiing head coach Rebecca Flynn Woods ’89 poses in the team’s Alumni Gym equipment room with her daughter, captain Kaelyn Woods ’20. Kaelyn, granddaughter of the late Bates coaching legend Bob Flynn, is the fourth generation of her family to have a great impact on Bates skiing. But her Bates experience has been her own. “The focus was on Kaelyn’s experience as opposed to carrying on the big family tradition,” says Becky. “She was very close with my dad so I think that is something she’s always carried with her.”

On Day 1 of the 2020 NCAA Championships, in Bozeman, Mont., Kaelyn competed in the 5-kilometer freestyle race, while alpine skier Arie van Vuuren ’22 of Boulder, Colo., competed in the giant slalom. The second day was canceled due to the emerging global pandemic 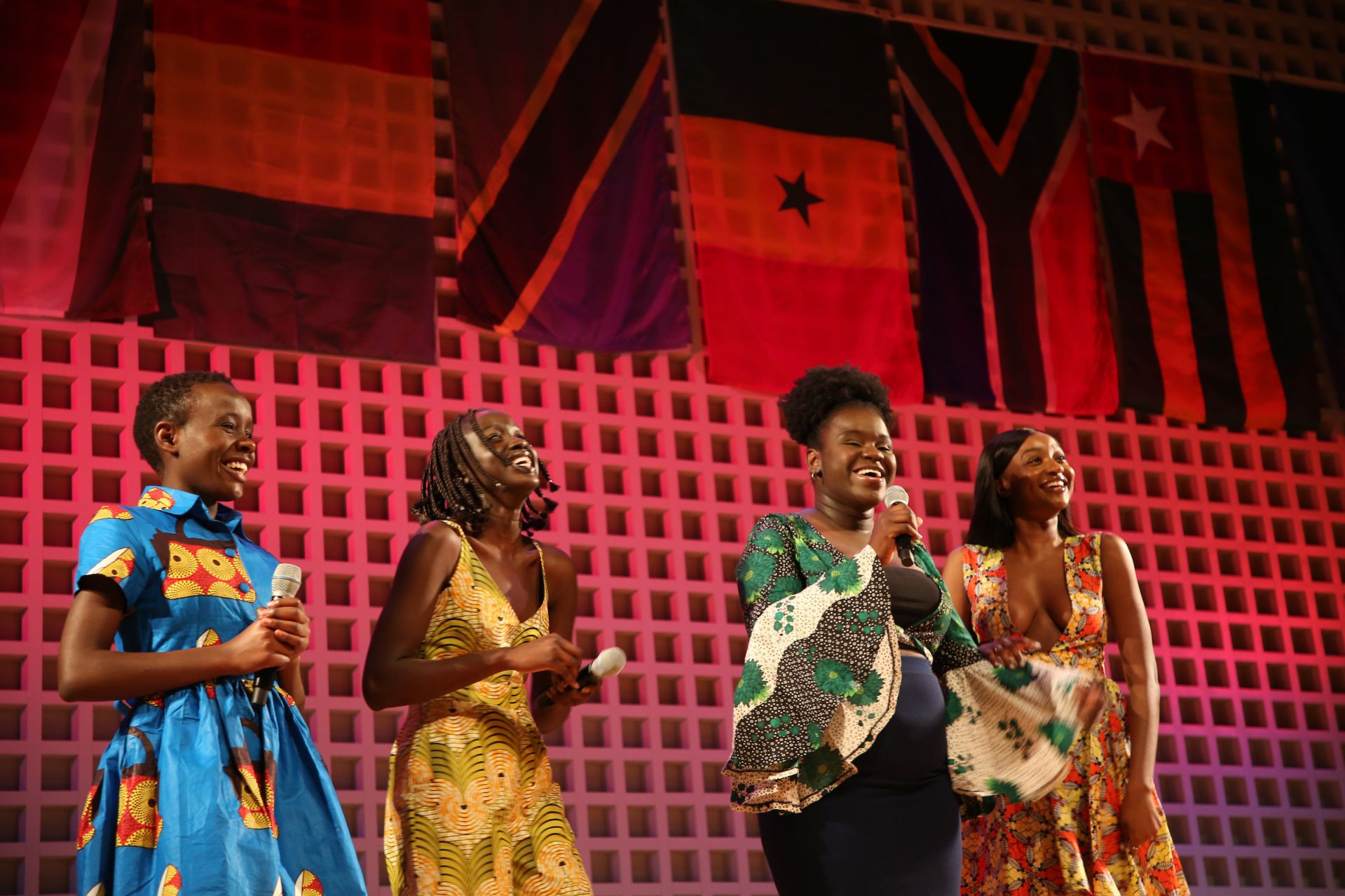 From left, Nicole Kumbula ’21 of Chinhoye, Zimbabwe; Sandia Taban ’22 of Changsu, China; Ojochenemi Maji ’22 of Ikoyi, Nigeria; and Adama Diaby ’22 of New York City greet the audience as organizers of the annual Africana Fashion Show, presented in the Olin Arts Center Concert Hall to an appreciative SRO crowd on March 6. This year’s performance, Sarauta, which in Hausa means royalty, featured fashion, song, dance, and spoken word from throughout the African continent.

It was a wonderful show, with a large cast, reports James Reese, associate dean for international student programs. The four organizers appeared in the show, but “let the many other students be the stars. They were the stars in one of the best shows ever.” 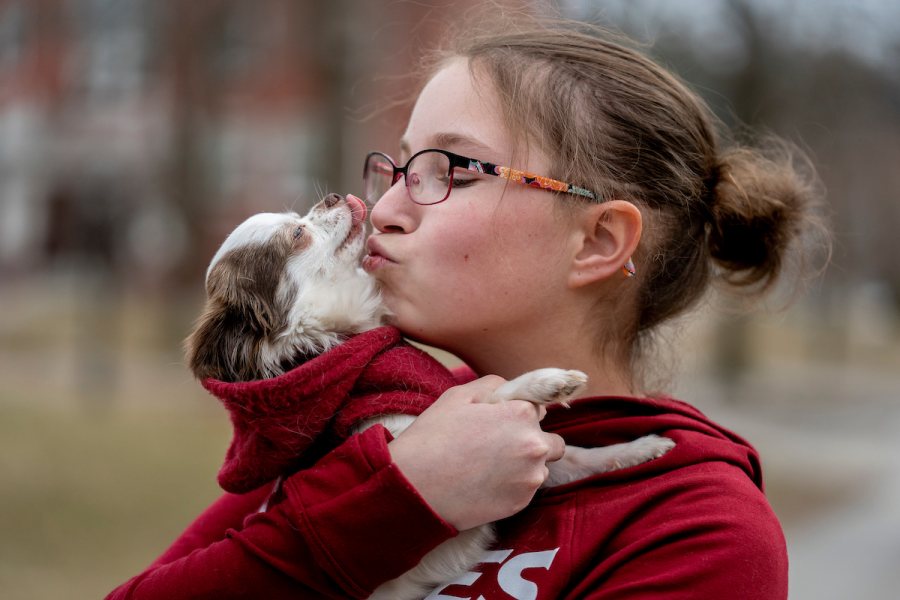 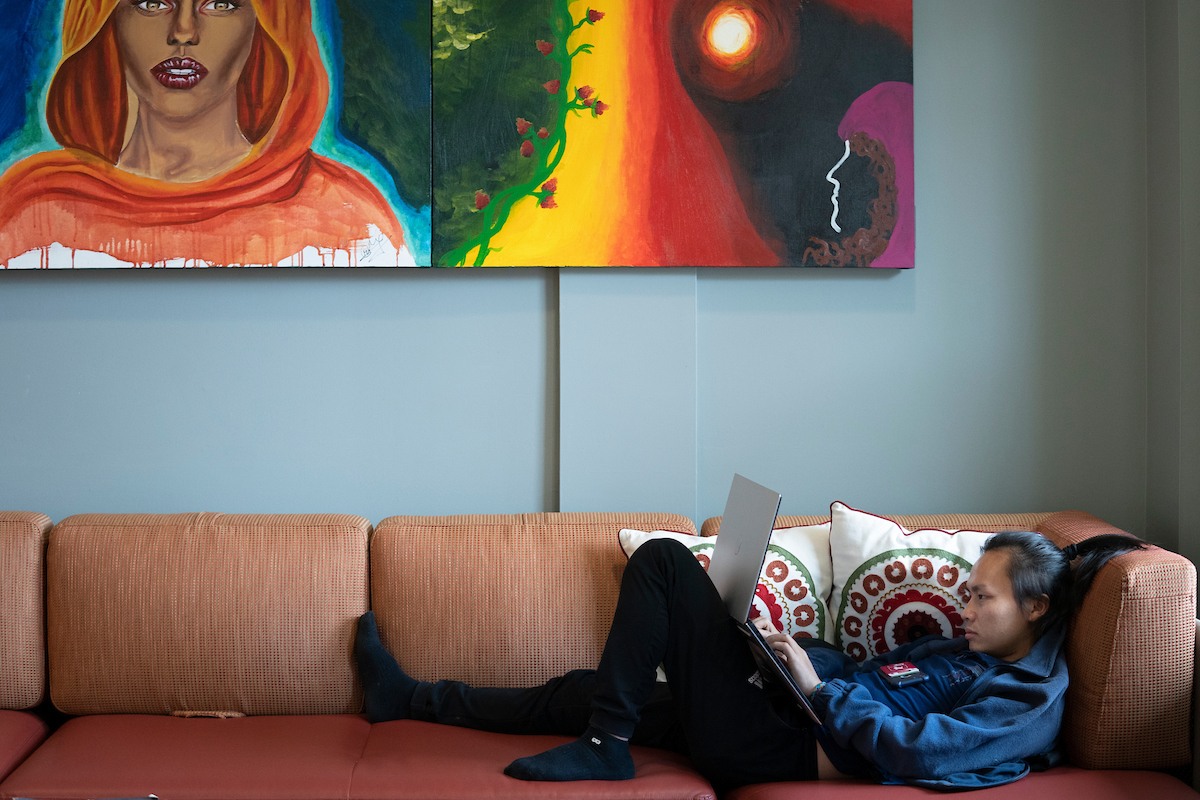 “I’m making a new language,” says Her Vang ’21 of Swampscott, Mass., on March 9, stretched out on a couch in the college’s Center for Global Education in Roger Williams Hall. Vang’s project was for a linguistics course taught by humanities lecturer Dan Sanford, who is director of writing at Bates and of the Academic Resource Commons. 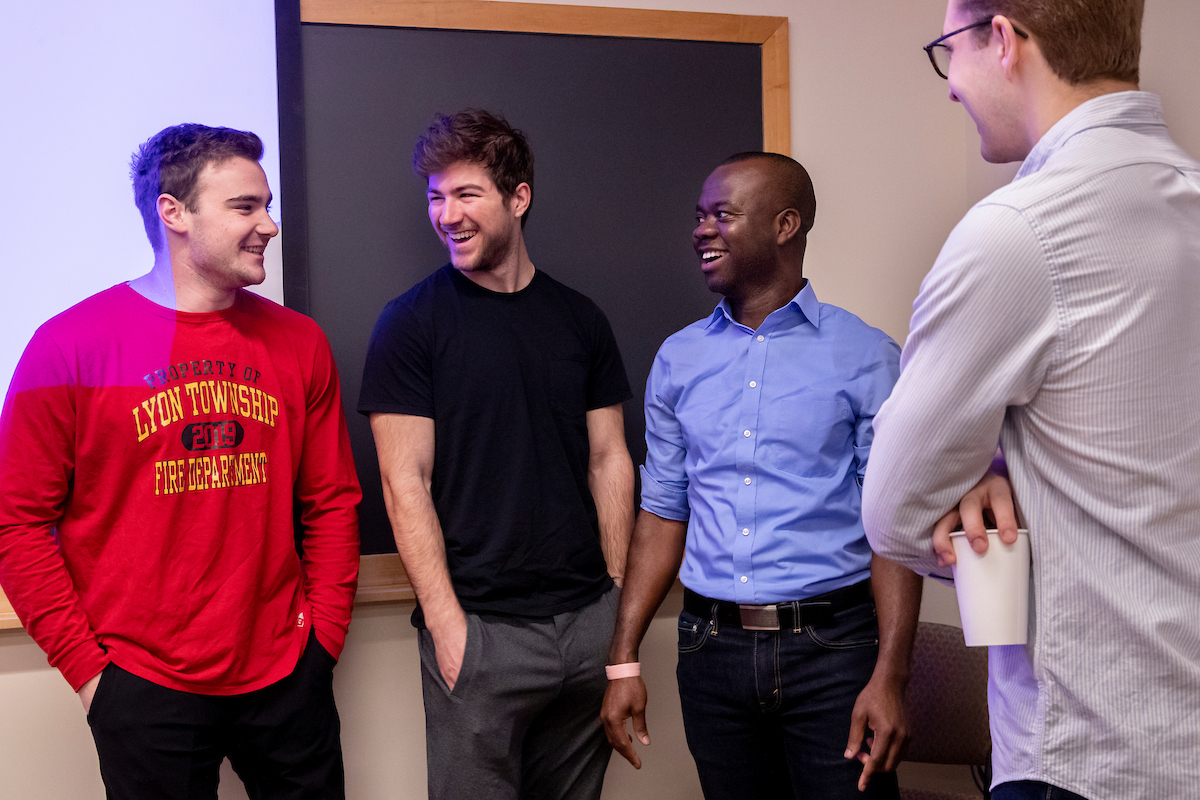 Students in Visiting Assistant Professor of Economics Michael Osei’s course on financial management huddle with him on March 10 before a class presentation. Shown from left are Will Haskell ’21, Robert Strain ’20, Osei, and Thomas Luiselli ’22. The course gives students the ability to think critically about information in a company’s financial statements; teaches tools and techniques for analyzing and valuing companies; and trains them to effectively communicate their analyses. 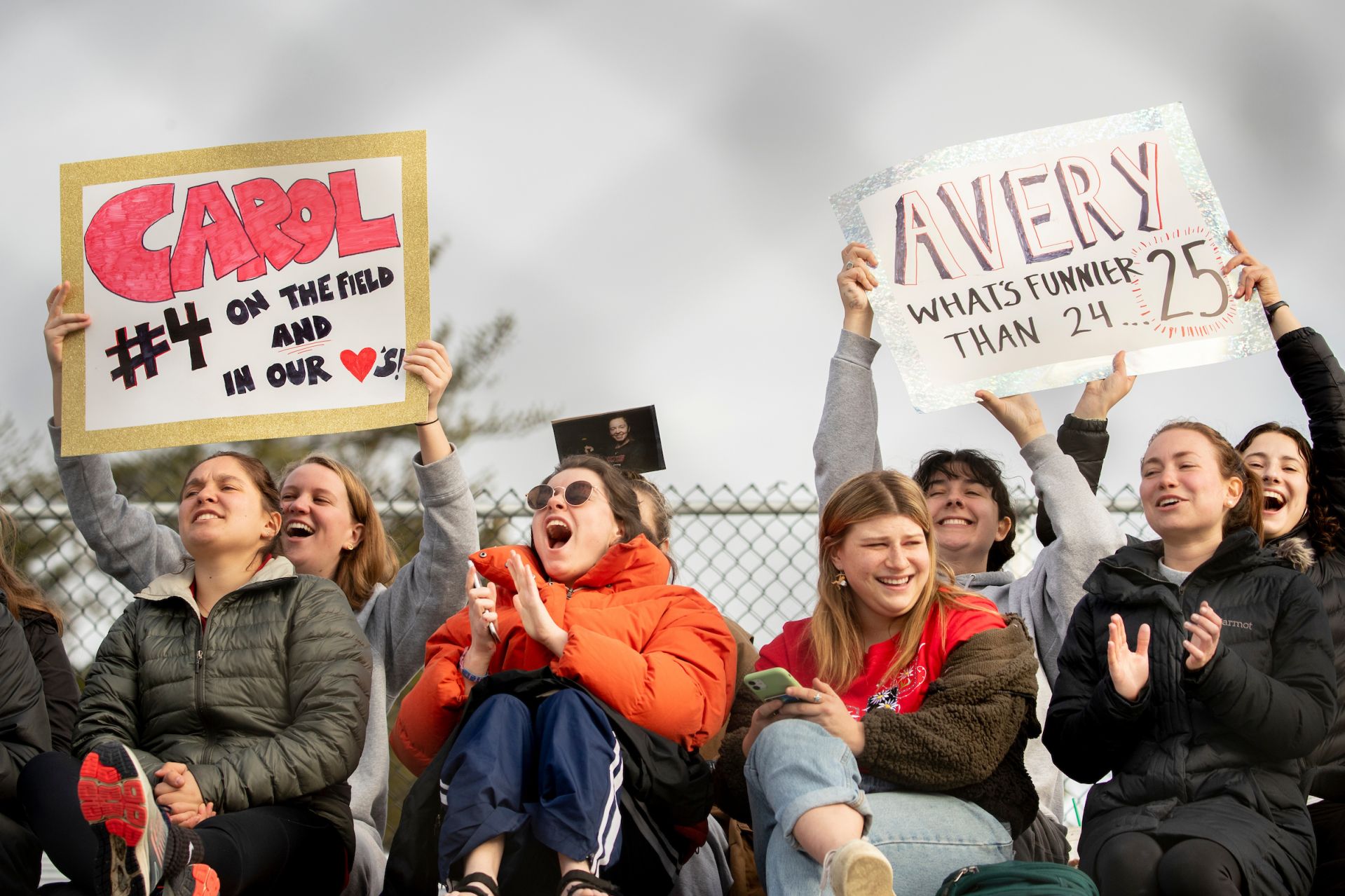 Fans in the stands go wild on March 10 as women’s lacrosse defeats the University of Southern Maine by a score of 20-1 in what would end up being the final home game of the spring season. 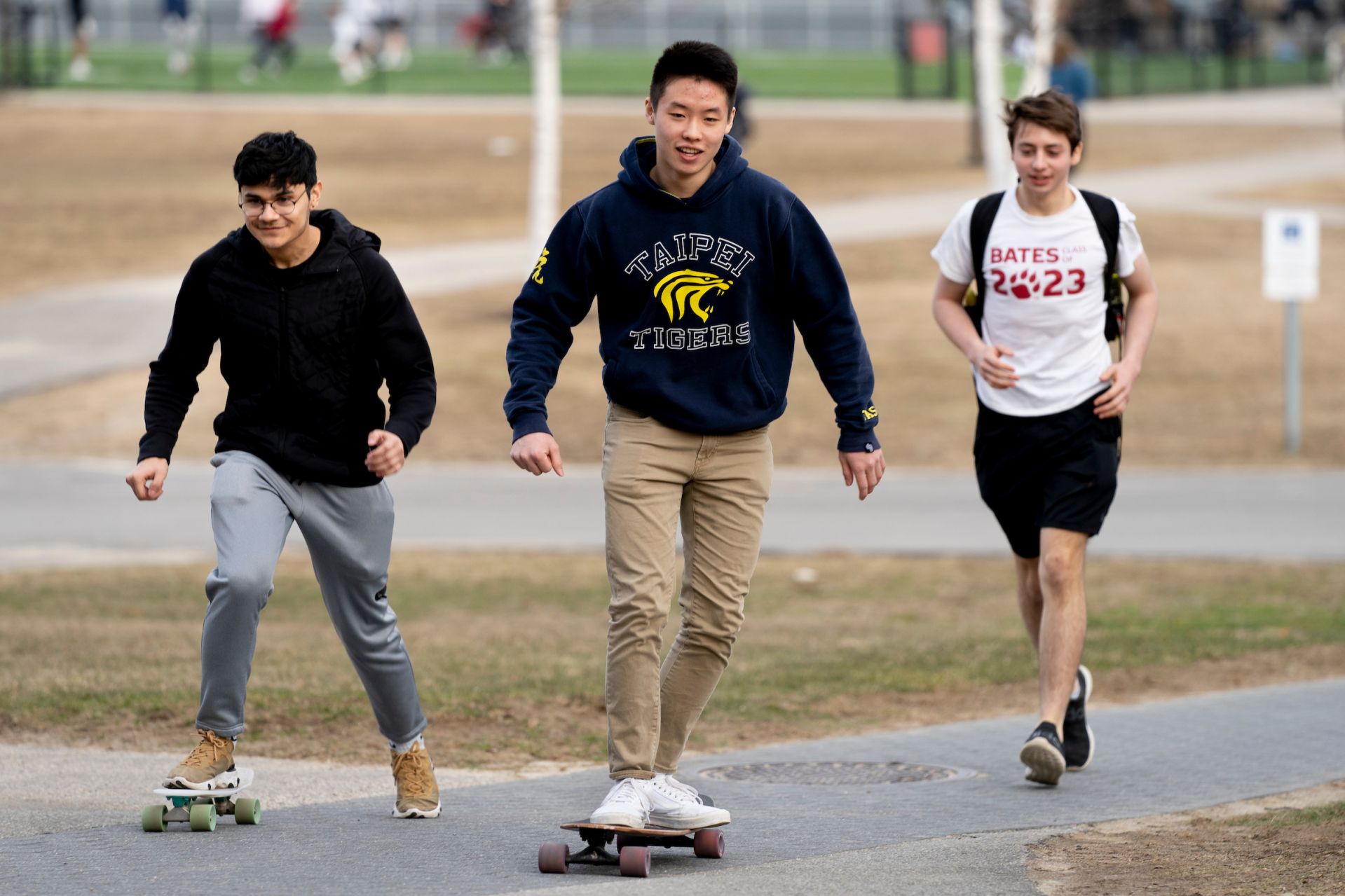 After dinner at Commons on March 11, Luis Orozco ’23, Thomas Zhu ’23, and Will Symmans ’23 head to Pettengill Hall to study.

The Pivot to Remote Learning 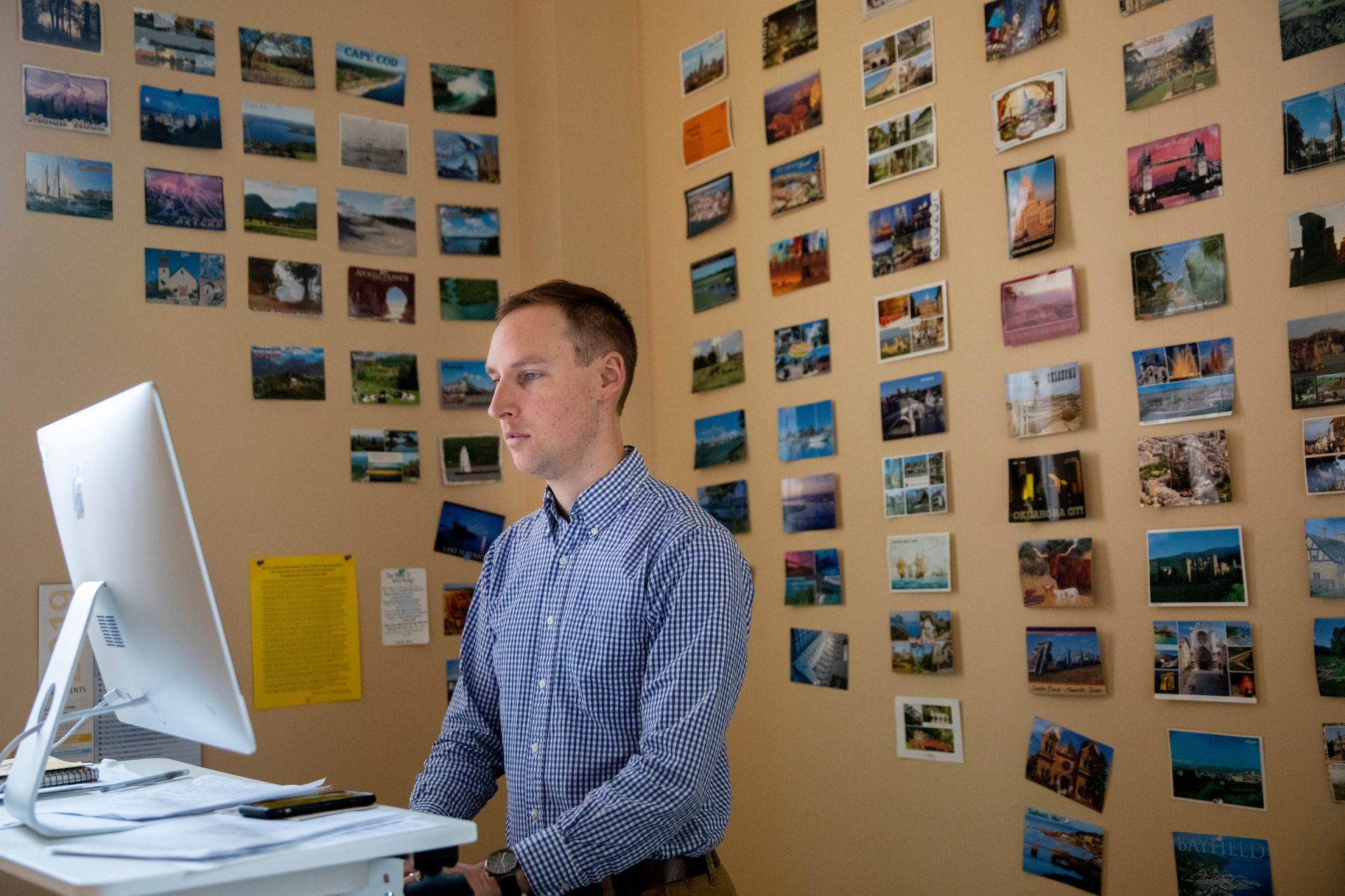 On the morning of Friday, March 13, President Clayton Spencer announced that the college would suspend in-person classes at day’s end and resume remotely in 10 days. Shortly afterward, Visiting Assistant Professor of Environmental Studies Francis Eanes begins reviewing his course materials in preparation for remote learning. Behind him are postcards from his travels 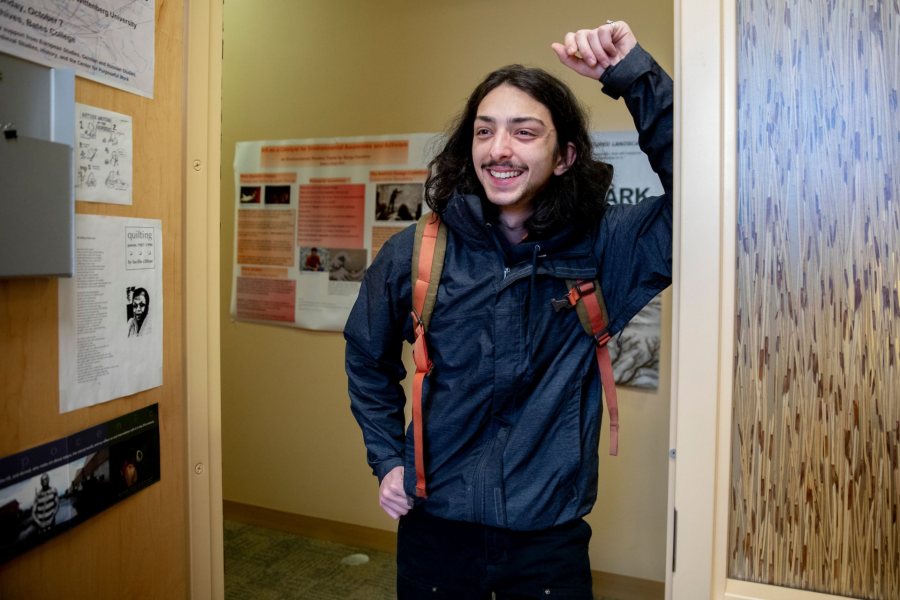 On March 13, shortly after the announcement of the college’s closure, environmental studies major Tanner Stallbaumer ’20 of New York City pops his head into the Hedge Hall office of Jane Costlow, Griffith Professor of Environmental Studies, to say his goodbyes. 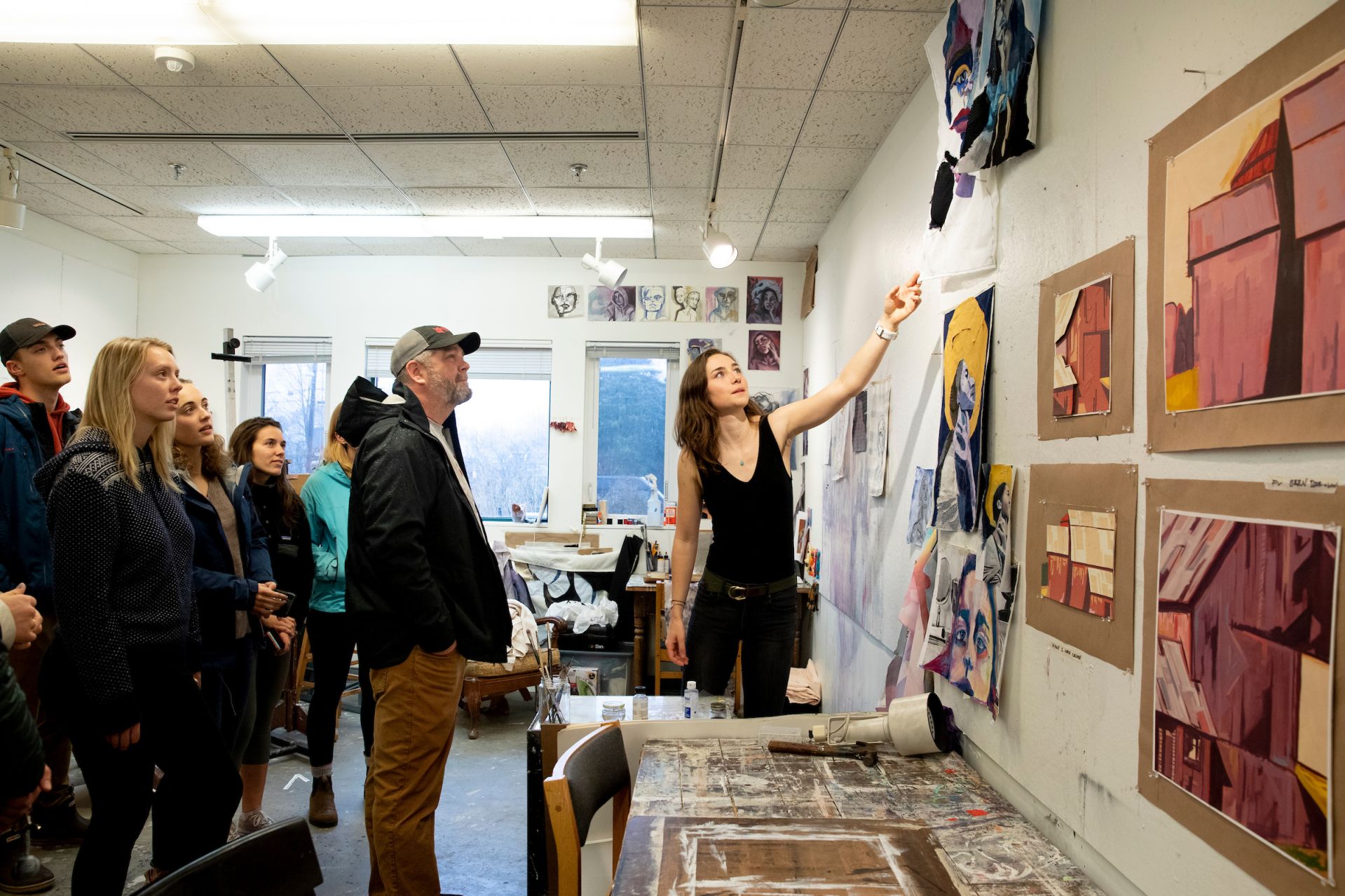 On the afternoon of March 13, studio art major Grace Smith of Williamstown, Mass., realizing that she wouldn’t be able to show her work at the Bates Museum of Art’s annual Senior Thesis Exhibition, invites her rowing teammates and coaches, including head coach Peter Steenstra, to an informal showing at her Olin Arts Center studio. Other senior artists did the same. 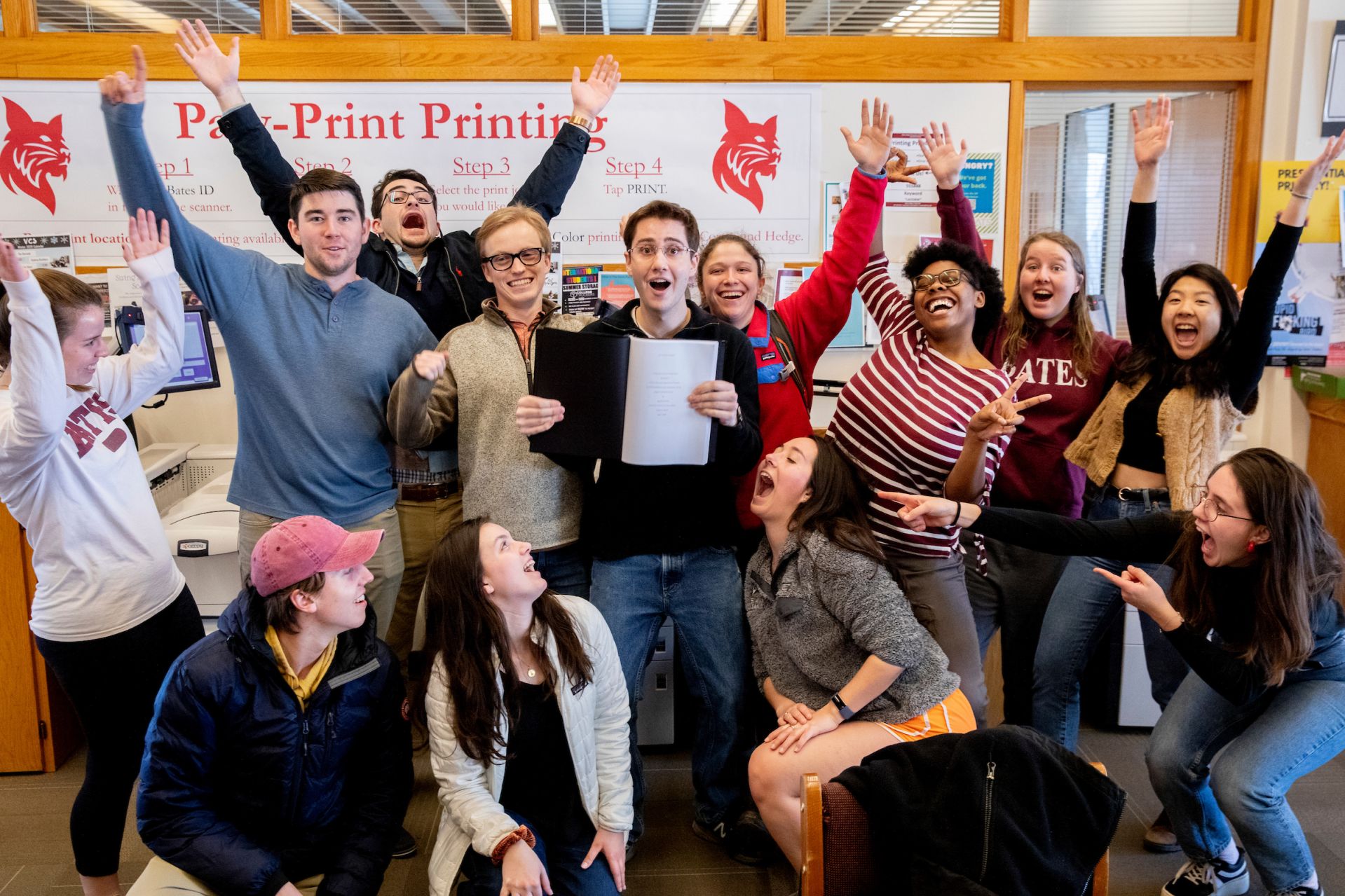 March and April can be happy and raucous times on the first floor of Ladd Library as students engage in a joyous Bates tradition: a senior and a friend placing the completed senior thesis into its traditional black binder. Before leaving campus, English major Jonathan Farrell ’20 of Middletown, Conn., gathers friends on March 14 to bind his creative-writing thesis. The thesis wasn’t quite done, but he felt a strong need for the traditional ritual of closure and friendship. 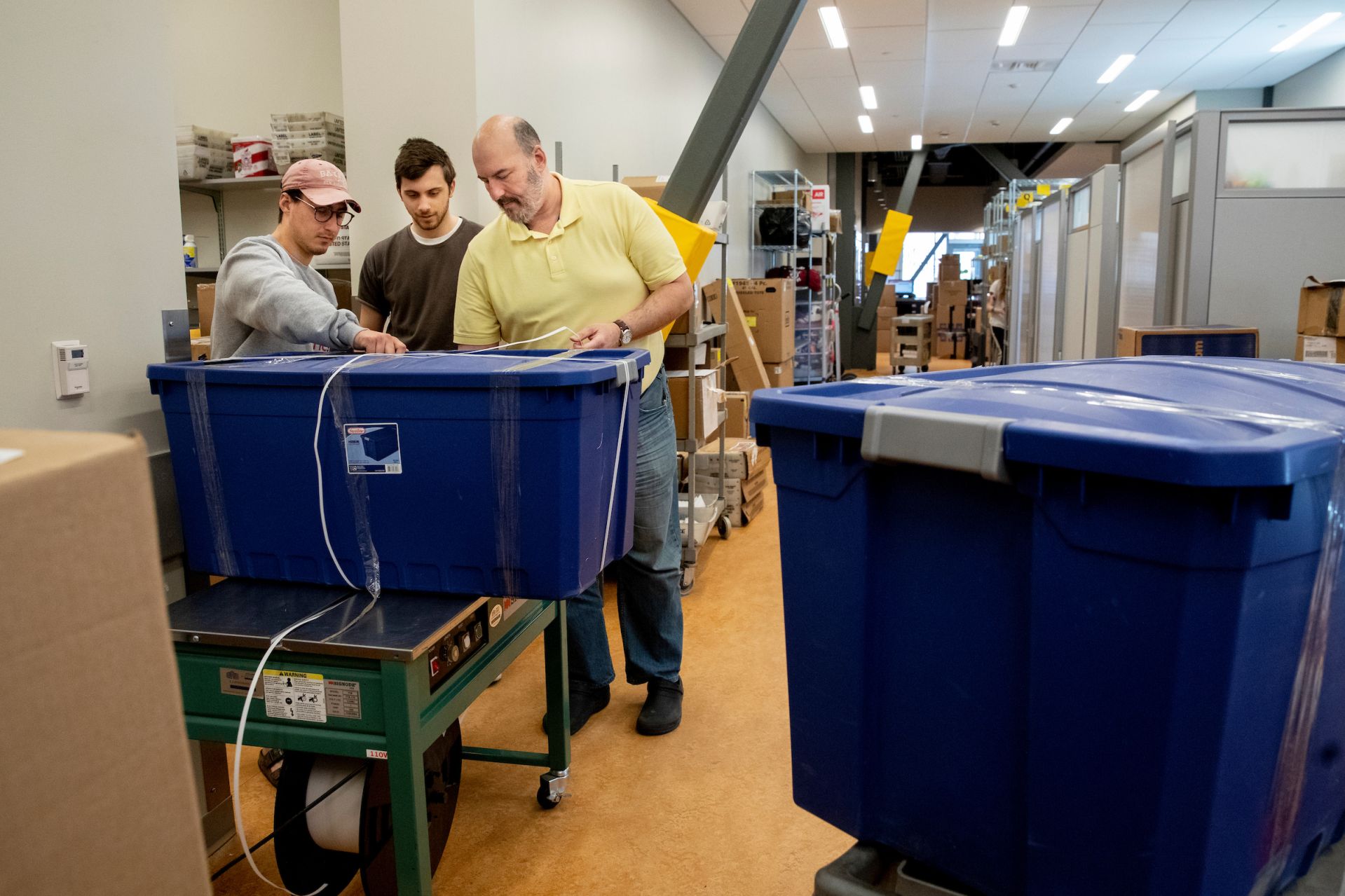 “My life in two boxes,” said Nick Eaton ’20 of Lake Oswego, Ore., one of the nearly 1,600 students preparing to leave campus and transition to remote learning. He’d bought two storage bins, now stuffed to capacity with his 95 pounds of belongings. Helping him secure the tubs for shipping were Assistant Director of Post & Print Ed Jawor, right, and Michal Cwik ’20 of Auburn, Maine, a friend who came to help on the morning of March 16. 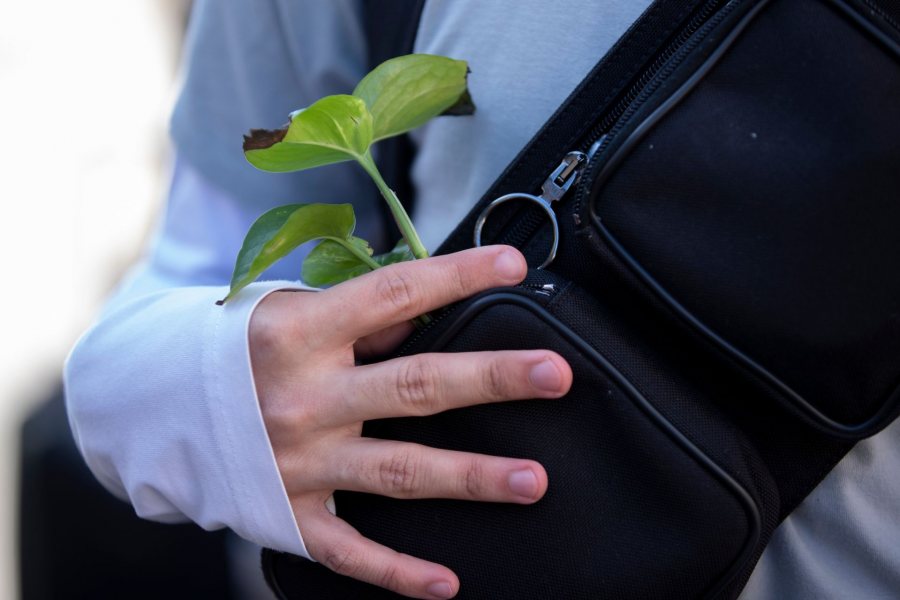 As students gather in front of Chase Hall on March 16 to board buses that will take them on the first leg of their trips home, Sultan Hashmi ’23 of Belvedere Tiburon, Calif., tucks a philodendron cutting from his Bates dorm room into his travel organizer. “I couldn’t bear to leave it behind,” he said. 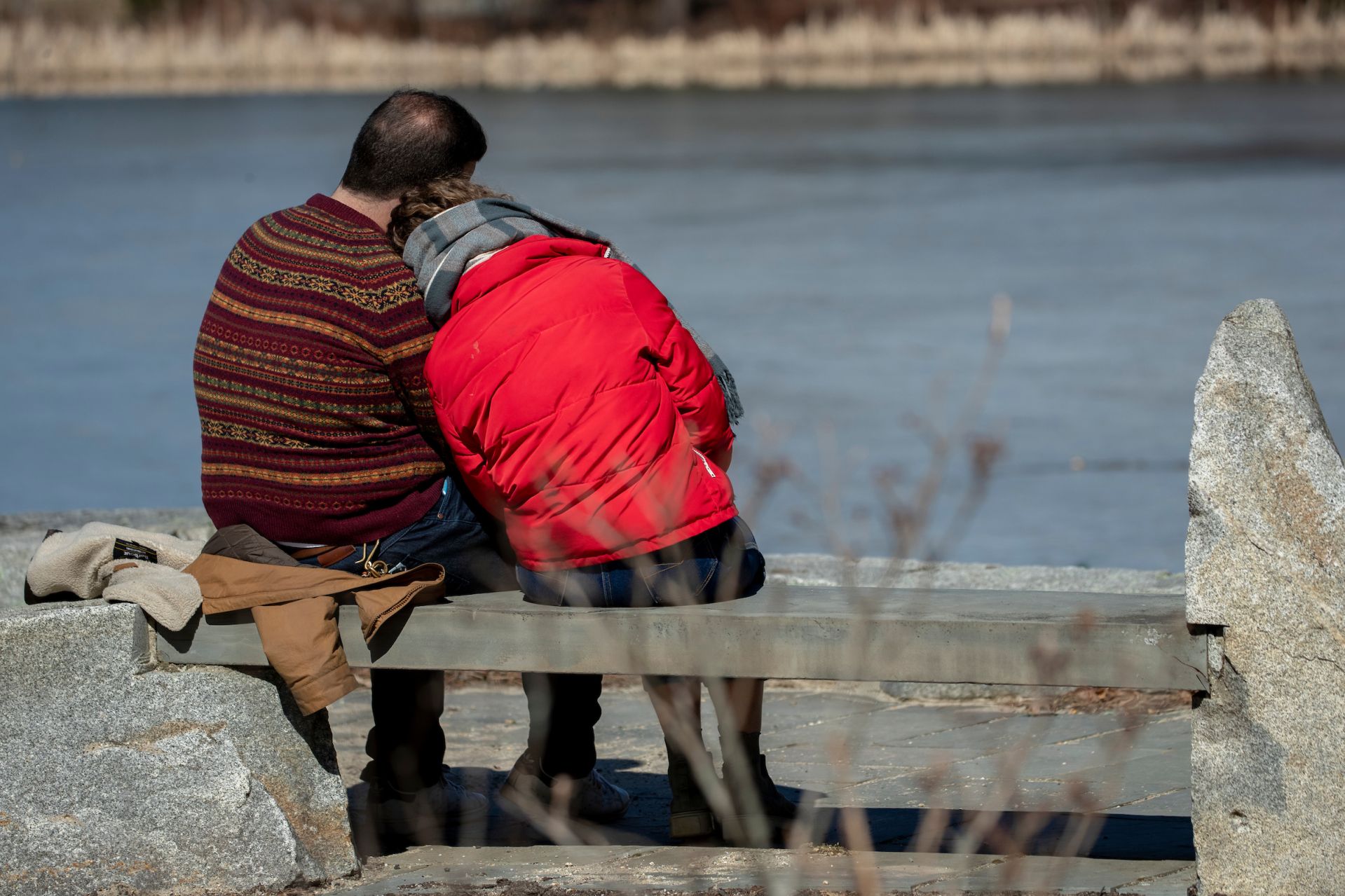 Before heading their separate ways to take up remote learning, to begin March 23, seniors Nick Hill of Baltimore and Lila Patinkin of Chicago take a quiet moment together at Lake Andrews on March 16. Later, they shared their thoughts in an email: “It’s been unprecedented and heart-wrenching for our whole class. These are some of the toughest goodbyes we’ve ever had to make. But it’s taught us to hold each other close, and given us a real sense of urgency to stay connected.” 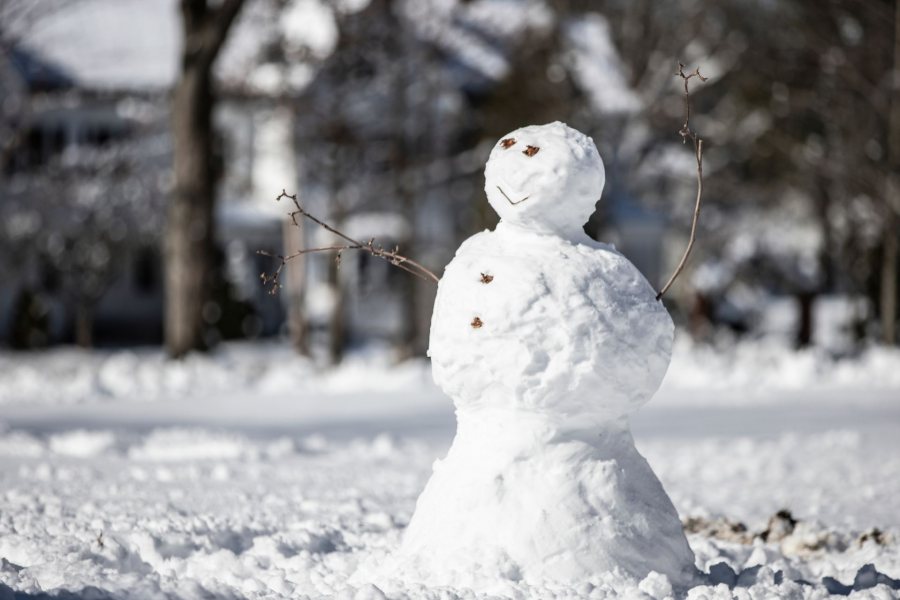 A snowman appears in front of Coram Library on March 24 after an early spring storm. 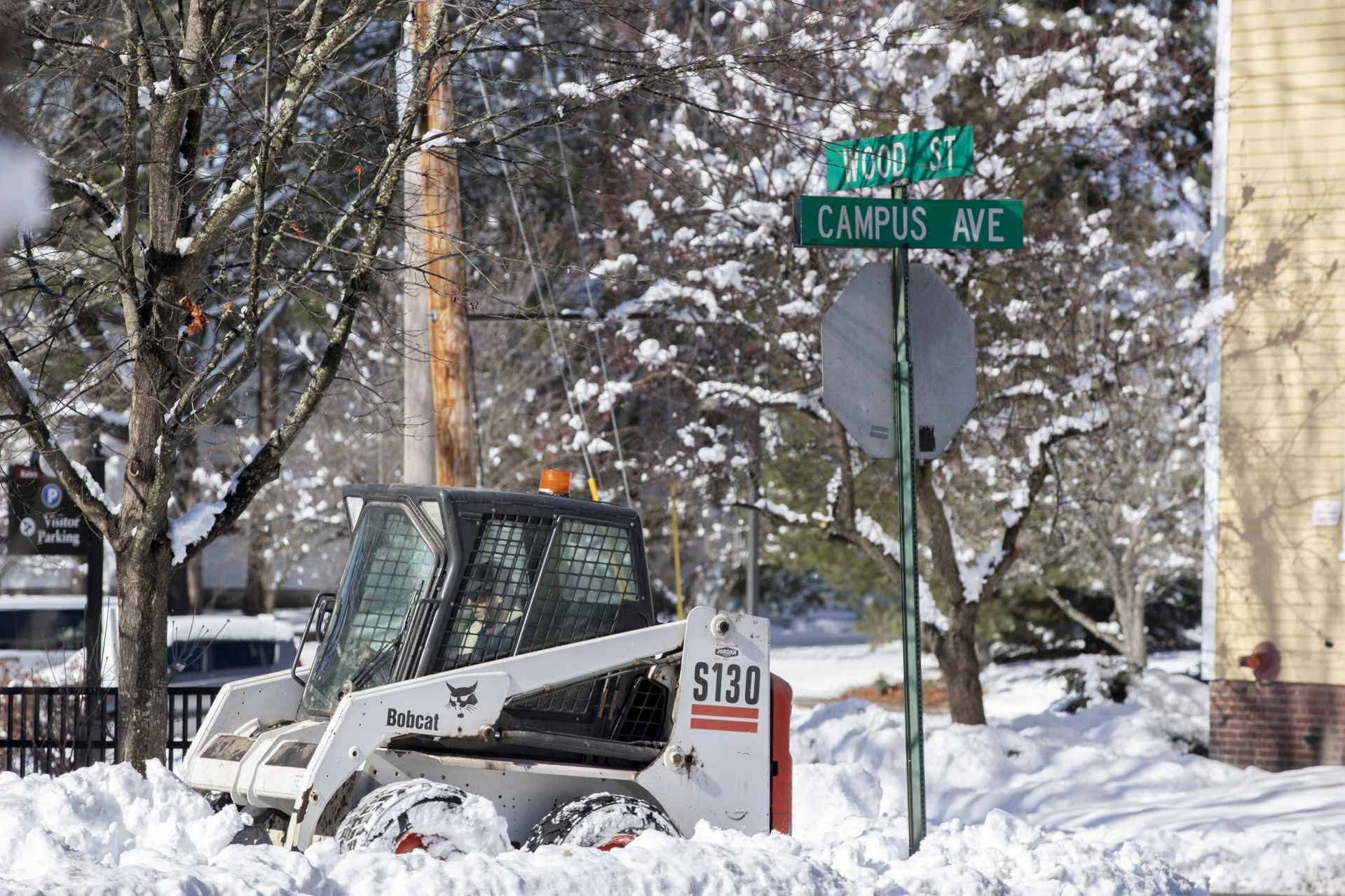 Lead groundskeeper Mike Adams of Facility Services, one of the college’s essential employees during the COVID-19 outbreak, uses a Bobcat skid-steer loader to take on the snow on March 24. 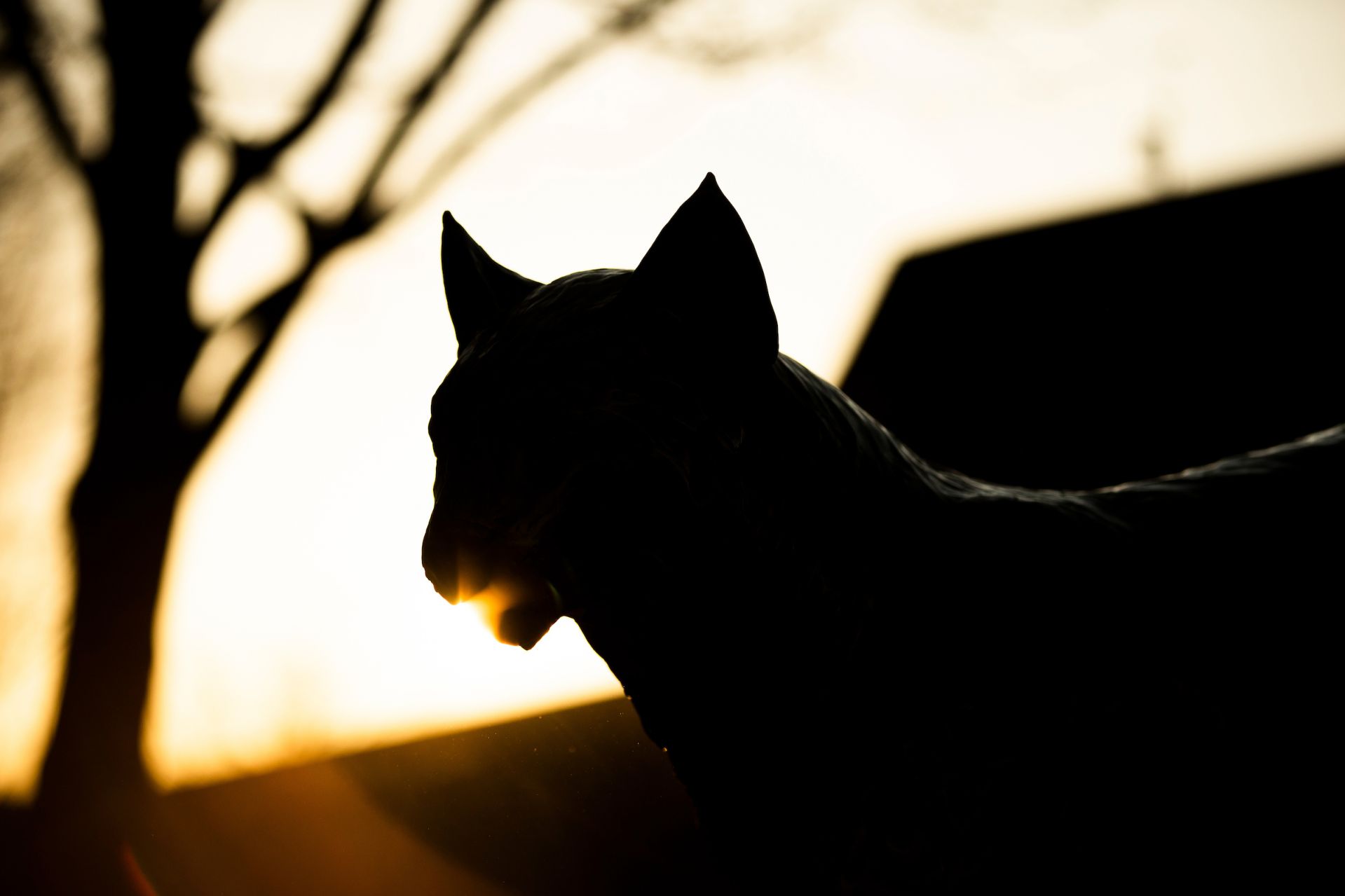 Looking for cat photos? Here is ours: the stalwart Bobcat at sunrise on March 28. The bronze sculpture, by artist Forest Hart, made possible by the Class of 2004 and other donors, was dedicated on June 13, 2009, during Reunion. 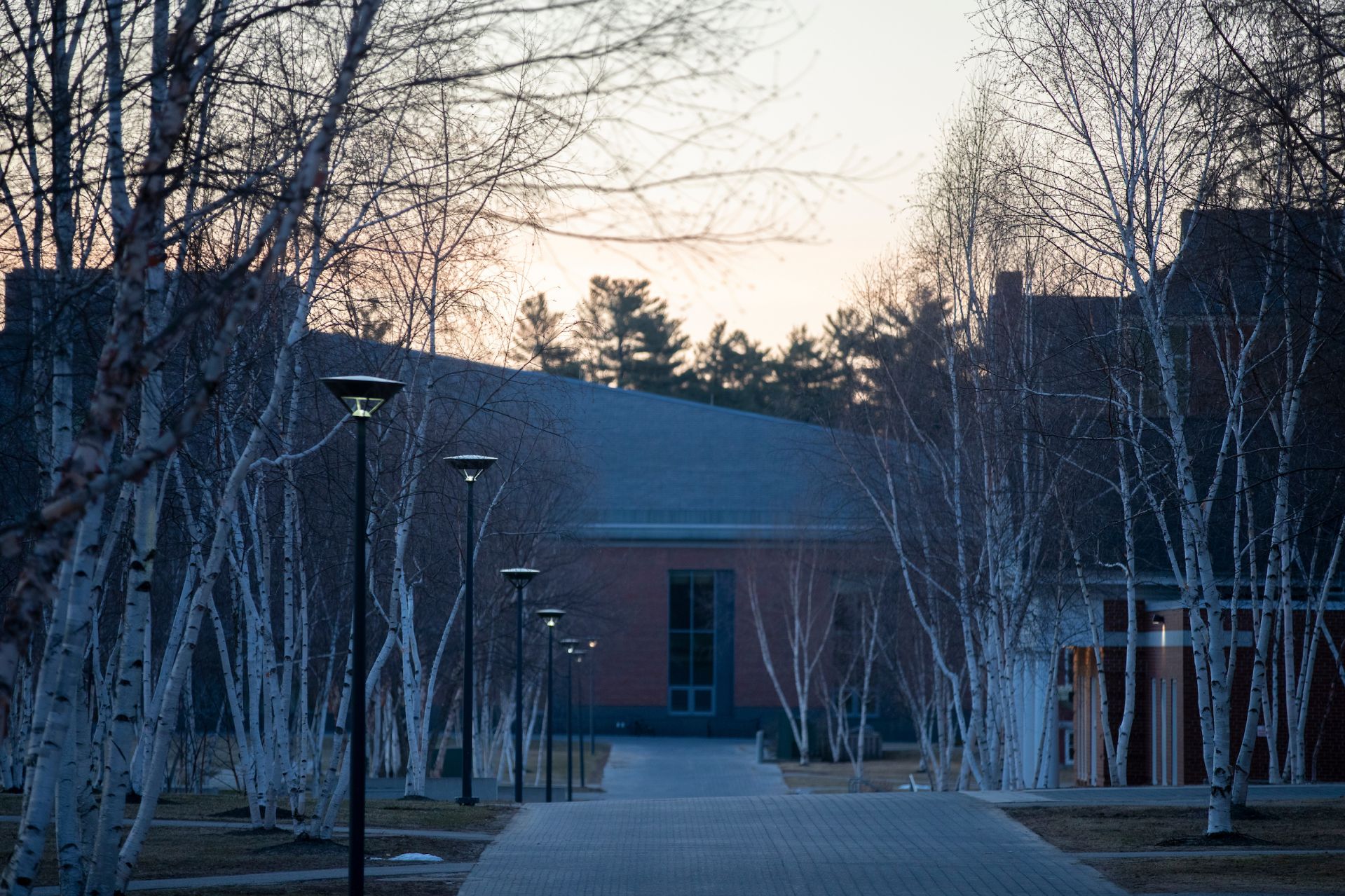 An empty Alumni Walk on March 28. We miss you. What else should we say? 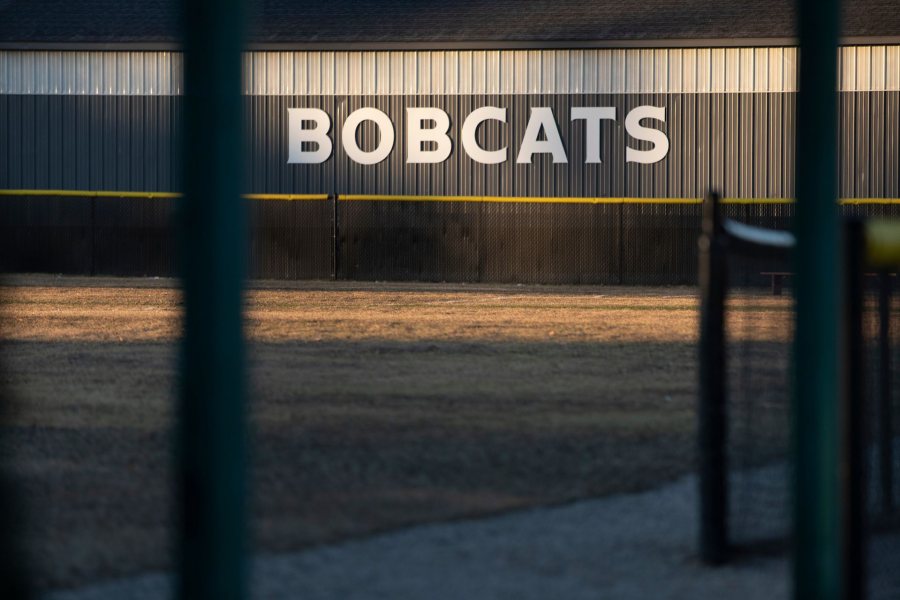 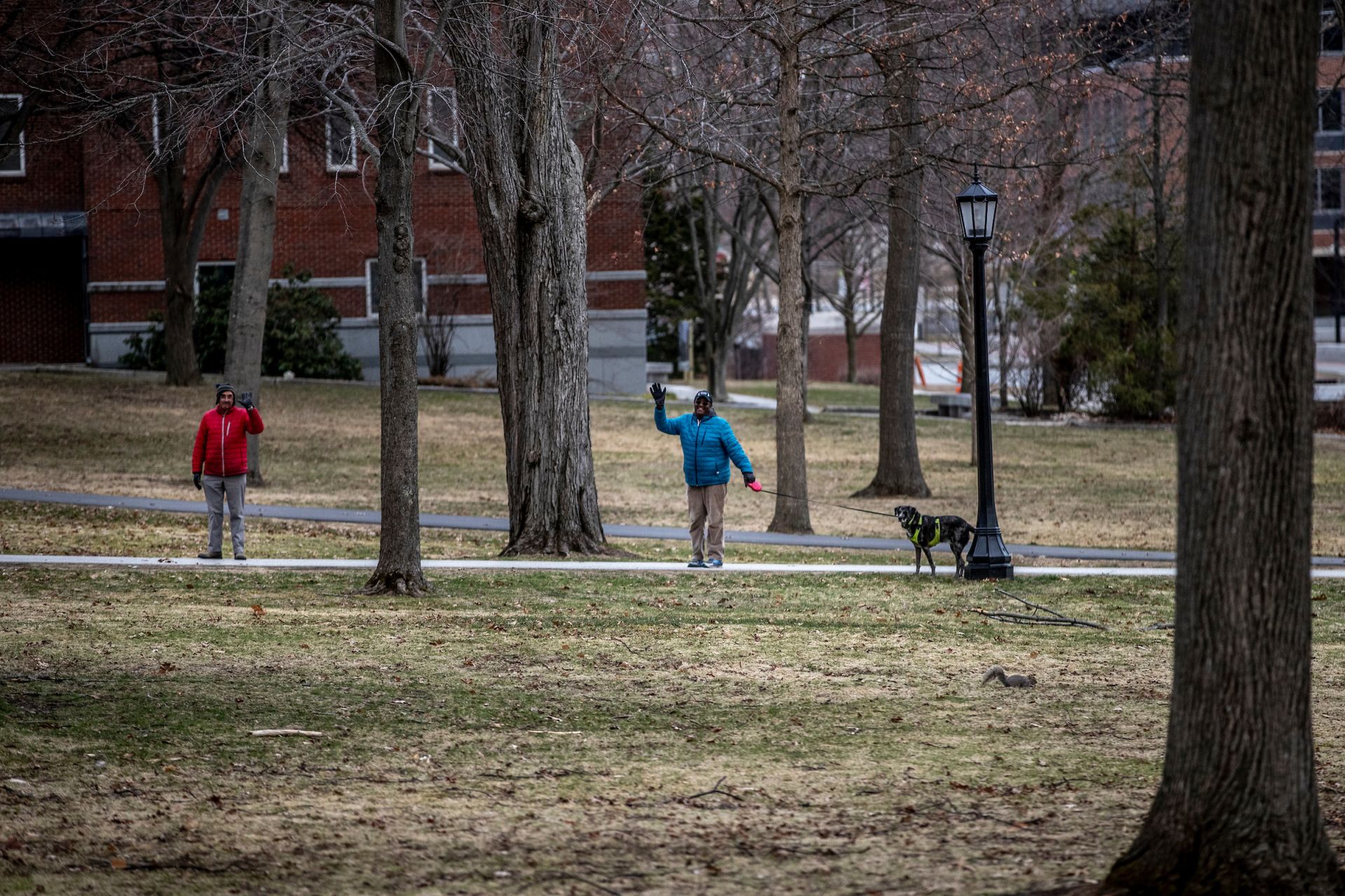 From left, Professor of Spanish Baltasar Fra-Molinero and Charles Nero, Benjamin E. Mays ’20 Distinguished Professor of Rhetoric, Film, and Screen Studies, wave from a distance on the Historic Quad on April 5. They were on campus with their dog, Caesar.