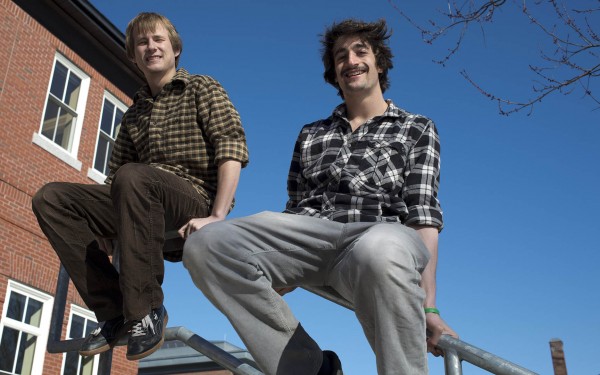 Seniors Spencer Collet of Leawood, Kan., and James LePage of Cumberland, Maine, are two of the three Bates students to receive 2013 Davis Projects for Peace awards.

The $10,000 awards support international projects that college students undertake to “bring new thinking to the prospects of peace in the world,” in the words of philanthropist Kathryn Wasserman Davis. Learn more.

Collet and LePage received the award for “Tweets for Peace,” a project using the Internet to enhance communication between Israeli and Palestinian youth. The pair will work with former participants in the Seeds of Peace conflict resolution program that takes place every summer in Otisfield, Maine.

The other 2013 Bates recipient is Aung Myint, a sophomore from Yangon, Myanmar. Learn more about Aung Myint’s project.

LePage has spent two summers as a counselor at Seeds of Peace, which was created to build trust and productive relationships between Israeli and Palestinian young people. “They start to understand each other, learn more about each other,” he says.

“Through the process of hearing what the other side’s gone through, they understand that both sides are suffering and something’s got to be done.”

There are some 3,000 Seeds alumni in the Middle East. LePage and Spencer realized that the Internet, particularly social media, could provide a potent forum for those alumni to stay in touch and to share the good things that are happening in the region.

Collet and LePage have designed their Project for Peace to harmonize with the networks and relationships that link Seeds of Peace alumni in Palestine and Israel.

“We’re trying to both keep the discussions going that happen at the Seeds of Peace camp, and also make them visible so that the rest of the world can see that these conversations do happen in peaceful ways,” says Collet.

Working in the Seeds of Peace office in Jerusalem, the pair will produce a website that, a la the Huffington Post, will publish photos, videos and text posts contributed by Seeds alumni. Collet and LePage will provide computers and cameras for participants, and teach workshops in the principles and mechanics of channels such as Twitter and YouTube.

Their students will be able to capture their nonviolent political activities with the Tweet for Peace cameras, edit and upload their video, share their work and perhaps engage others interested in politics. The operation will serve not only as a tech center for peace, Collet and LePage hope, but also symbolize open and thoughtful discourse, political enfranchisement and unity in the quest for a two-state solution.

“James and I hope that this project will capture the ideological pluralism of the new generations of Israelis and Palestinians,” Collet says, “so that they can serve as literal seeds for peace and reasoned respectful discourse.”