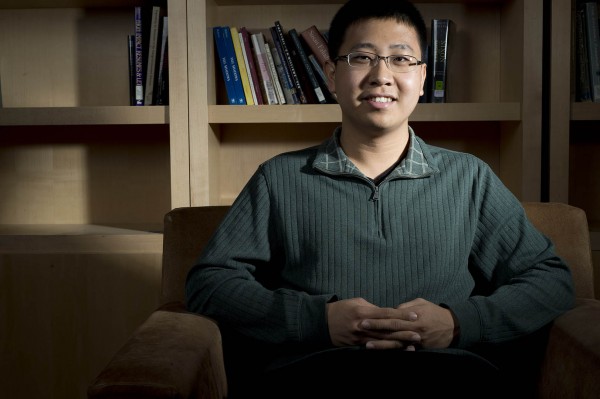 Aung Myint ’14 of Yangon, Myanmar, is one of three Bates students to receive a 2013 Davis Projects for Peace award.

The $10,000 awards support international projects that college students undertake to “bring new thinking to the prospects of peace in the world,” in the words of philanthropist Kathryn Wasserman Davis. Learn more.

Myint received his award for “Minorities, Monasteries, and Conversations,” a reading-discussion program to help build the capacity for critical judgment and constructive dialogue among ethnic minorities in his native country. Using Burmese translations of English texts from the Maryland-based Touchstones Discussion Project, Myint will coordinate gatherings in Buddhist monasteries in Yangon.

Two seniors, Spencer Collet of Leawood, Kan., and James LePage of Cumberland, Maine, were the other 2013 recipients at Bates. Learn more about LePage and Collet’s project.

Since 2010, Myanmar (the former Burma) has enjoyed a civic liberalization after decades of authoritarian military rule. “It was authority and obedience,” Myint says. “You give commands and people just take them without question.”

One effect of such rule, Myint explains, is a weakened popular capacity for independent thought and deliberative discussion. His Project for Peace will address that deficit by gathering ordinary people together to read, and have guided discussions about, provocative Touchstones texts representing such authors as Aristotle, Hobbes and the Rev. Martin Luther King Jr.

Such discussions “look like a very elementary thing in terms of the Western education,” he says, “but it’s revolutionary in a country with an authoritarian background.”

The summer 2013 program will involve members of ethnic minority groups, which number some 135 in Myanmar. Conflicts among those groups are a serious problem, Myint says.

“Ethnic separations originate from a lack of interaction and exchange of diverse perspectives. For decades, under the authoritarian system, generations of students experienced passive learning with the complete absence of independent thought and exchange of ideas.”

With other volunteers from Myanmar who are studying abroad in the U.S., Aung will hold twice-weekly gatherings at three monasteries, which play a traditional role as community centers. Each discussion group will accommodate some 30 participants.

Any impacts from the project “will be long-term,” he says. “We can’t really see a tangible outcome right away — it’s more like building the democratic roots in grassroots communities.”

Myanmar’s educational system played into the hands of the regime with its emphasis on obedience and rote memorization, as opposed to the critical thinking skills and “learning how to learn” espoused by a liberal arts education. And Aung has had intimate experience of the contrast between the two.

As a student, he was ranked No. 6 in Myanmar’s National Matriculation Examination, thanks to his memorization abilities. But later he attended the Pre-Collegiate Program of the Diplomatic School in Yangon, an initiative created by two American academics to prepare students for study abroad. There, the Western model of critical education was in full force.

There, Aung recounts, “I discovered a new perspective of seeing things, unrestrained from conventional notions of what is right and what is wrong. It was quite an intellectual revolution!

“I feel this is exactly what we in Myanmar need.”