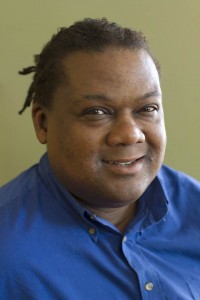 Beasley is one of six Bates faculty members who have received tenure appointments or promotions that will take effect Aug. 1, 2012.  (Read the story.)

At Bates he has taught courses including “Cultural Politics,” “The Story of Things: Introduction to Material Culture” and “Food, Performance and Community.”

Beasley is a founding member of the Institute of Culinary Cultures of New Orleans and the Hemispheric Institute of Performance and Politics. He also served as an international curator for the 2010 Ghetto Biennale in Port-au-Prince, Haiti.

His research in countries including Morocco, Brazil and Haiti has led to scholarly articles in a range of academic journals including Text and Performance Quarterly, Performance Research, The Journal of Curatorial Studies and Gastronomica: the Journal of Food and Culture.

He was awarded a 2010-11 Andy Warhol Artist Writers Grant to support his proposed book about living artists in the African Diaspora and a 2010-11 Whiting Foundation Fellowship to complete ethnographic work on gender, economic development and foodways in Haiti. His short film on food and ritual in Brazil was presented at the 2010 UMAMI Food and Art Festival in New York.

He received a bachelor’s degree in performance and drama from Regents College (UK), a master’s degree in anthropology from the Sorbonne and a doctorate in rhetoric and cultural studies from the School of Communication Studies at Ohio University.