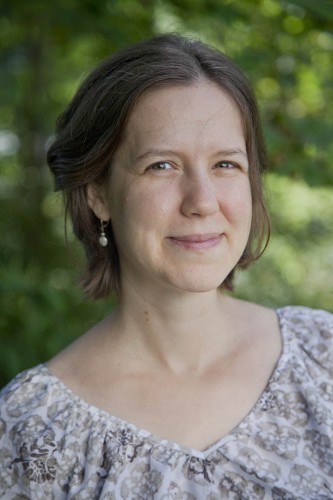 Raluca Cernahoschi and Jakub Kazecki were hired in a joint appointment as assistant professors of German. Cernahoschi, who has been a visiting professor at Bates the past two years, is a native of Romania.

But her Romanian education never introduced her to what is now one of her primary academic interests: the literature produced by that nation’s German minority.

Instead, it wasn’t until her graduate studies at the University of British Columbia that she discovered this literature whose brightest names include Herta Müller, Richard Wagner, Rolf Bossert and Franz Hodjak.

“I happened to be taught by one of the only North American experts on this literature,” Cernahoschi explains — Peter Stenberg, now professor emeritus of German at UBC.

The Romanian German poetry she studied “was a literature of resistance, and double resistance.” Coming of age in communist Romania after World War II, these writers at first rebelled against their minority-German heritage. “They didn’t want to represent that minority, which for them was regressive, very traditional, politically compromised — the older generation has a murky association with the Nazis.”

Instead, they identified as authors with the larger German literature and as political beings with the relatively liberal Romanian socialism of the late 1960s and early ’70s. This identification was short-lived, however. As Romanian leader Nicolae Ceausescu’s policies became increasingly repressive, their poetry became critical of the country’s social and political conditions.

Meanwhile, these writers became more accepting of their German minority origins. “They realized they were writing against something that was doomed anyway,” says Cernahoschi. “They started to sympathize and understand more where their parents and grandparents were coming from.”

Today, many of these writers have moved to Germany and joined the literary mainstream. “It’s a very dynamic literature still,” says Cernahoschi. “In interesting ways, they are still trying to position themselves” — a situation of particular fascination for Cernahoschi, whose research incorporates the problems and rewards of cross-cultural encounters.