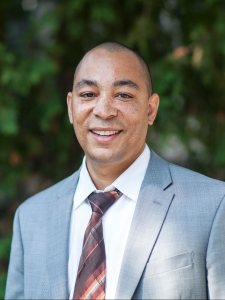 Born in the Bronx, New York but raised in Skowhegan, Maine (otherwise known as “Skow-Vegas”), Jared is a diehard Red Sox fan despite the Yankee blood that flows through his veins.  Being a first-generation to college student, Jared transferred twice as an undergraduate and spent time at three different institutions before graduating from the University of Maine at Farmington with a B.A. degree in history in 2001.  While he was there, he played for the men’s basketball team that would go on to induct him into their Hall of Fame 13 years later in September of 2014.  He was also known for sitting on student panels for the Admission Office describing his experience as a student-athlete, a transfer student and what it was like to be a student of color on a Maine college campus.  As a result of his involvement with admission, Jared found himself completing an internship in the UMF Office of Admission–an experience which ultimately led to the first three years of his admission career.  Since then, Jared has worked for Cornell University, Brandeis University and has been with the Bates Office of Admission since the summer of 2013.  After being away from Maine for more than nine years, Jared could not be happier having returned to “Vacationland.”

When he’s not on campus, Jared can be found with his fiancée and baby boy who was born in the summer of 2016.  They love to spend time with family and friends while being outdoors and soaking up all that Maine has to offer.