Twigs – grow in a fan like pattern spreading outwards, building on previous scales.

Bark: – often gray/brown with some reddish undertones; fibrous; as the tree ages and the trunk widens in diameter, the bark begins to peel more aggressively and the fibrous appearance becomes more apparent.

Northern white cedars (Thuja occidentalis) are an intermediately tolerant tree native to New England and southern Canada, with a disjunction in the southern Appalachians. They can also be found in the Midwest around bodies of water and swampy areas. They grow best in limestone soils, and are also found near bogs. 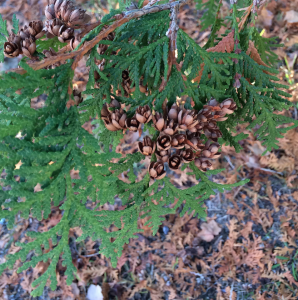 Northern white cedar is a historically important tree for Native tribes that inhabit the Northeast, early European settlers, and animals. The name ‘Arborvitae’ or the ‘tree of life’ was given by the native Wabanakis and Iroquois who first inhabited the Northeastern U.S and Southeast Canada. Jacques Cartier, an early French explorer in the 16th century, wrote about this tree and its medicinal properties, which were taught to him by the native populations. High in vitamin C, Northern white cedar was often used to treat scurvy, an illness that many early sailors suffered from. Northern white cedar is also valuable for its essential oils, which are considered to be therapeutic. 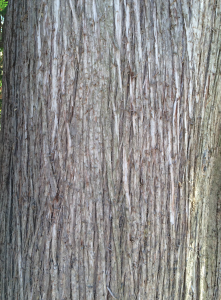 Due to its rot resistant characteristics, Northern white cedar is used for products that come in touch with
water and dirt: fence posts, shingles, canoes, flagpoles, and sometimes piping. Many old colonial houses and cities may still have cedar piping running through their basements and under their cobblestone streets. This was the case for Westbrook Maine, when cedar piping was found underneath the city streets. The bark is used as mulch, which is spread around the bases of other woody plants to protect against insects and retain moisture. Currently, one of the most common uses of Northern white cedar is ornamental, because the tree is long-lived and can take on various shapes through pruning.

Northern white cedar is an important component to the ecosystems it inhabits. Cedars often grow in thick groves and provide optimal coverage from snowfall for deer herds, snowshoe hare populations, and even porcupines. The vitamin rich twigs, shoots, and leaves are an important source of food for wildlife during long winter months.