Bates Performing Arts Coming to a Town Near You
For the 1995-96 academic year, the Alumni Office will be working with the President’s Office and several student performing groups to bring Bates performing arts to a city near you.

The Bates College “Fighting Bobcat” Orchestra, having enjoyed record attendance at alumni club events in the spring of 1995, will again hit the road. In the spring of 1996, stops are planned in Atlanta, Hartford, and Providence to coincide with the students’ spring break, which will take place April 14-21.

The Deansmen and Merimanders, Bates’s a cappellasinging groups, are always a huge draw on campus, frequently performing for capacity crowds in venues such as Chase Hall Lounge and the Olin Arts Center. Plans are in the works for these two groups to perform for off-campus alumni groups in Boston (December) and New York City (January).

Finally, a student production of David Mamet’s Oleanna— a biting examination of political correctness, power, and privilege — is scheduled to appear before the Chicago and Washington, D.C., Bates clubs in January. The production features Bates senior Alissa Stangle as Carol, a university student who visits her professor, John (played by senior Peter Murray), to discuss a failing grade. He seeks to comfort her by placing his arm on her shoulder, only to later find himself the subject of a sexual harassment complaint. “The play is not so much about sexual harassment as it is about power and the inability to communicate,” said director Caren Frost, a senior.

Invitations to these and all other alumni club events are mailed to alumni and parents of current students approximately three to four weeks before the event, so keep an eye on your mail!

Club Awards Bestowed
The Alumni Council of the Alumni Association is pleased to announce that the Boston Alumnae Club is the recipient of the 1995 Club of the Year Award. This award is given based on the quality of programming, the percentage of club membership reached, and the quality of the club’s leadership. “They have a great balance of programming,” said Scott Steinberg ’86, director of alumni relations. “Examples include receptions with the President at the Colonial Inn in Concord and receptions for admitted students. They’re also the only Bates club to sponsor an annual scholarship for a Bates student. Across the board, they offer consistently high-quality programming.”

The Washington, D.C., Bates Club is the recipient of the 1995 Club Attendance Award, given to the club which attracts the greatest percentage of its membership to a particular event.

The April 1995 performance of the Bates College “Fighting Bobcat” Orchestra in Washington served as the club’s big event. “It is difficult for a club of this large size to receive the attendance award,” said Steinberg. “Typically, this award has given some of our smaller clubs an opportunity to be recognized.” 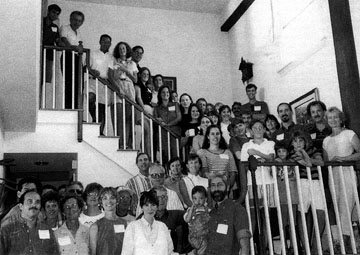