(With this new department of the alumni magazine we hope to provide an occasional forum to share Bates views, commentary, insight, and explanation.)

Thompson’s War: A Revolutionary Tale
Professor of History Jim Leamon is developing a reputation as the preeminent authority on Maine’s role in the American Revolution. His book, Revolution Downeast: The War for American Independence in Maine, won the New England Historical Association’s 1994 Book Prize for outstanding contribution to historical scholarship. It’s now out in paperback.

Leamon has become a popular speaker around the state, discussing both broad historical perspectives on the Revolution and its connection to Maine statehood, and smaller, more colorful matters — such as the story of Samuel Thompson, a Brunswick sawmill operator, tavern keeper, one of the original Bowdoin College overseers, and eventually a Massachusetts state senator (remember, Maine was part of Massachusetts in those days).

In touching on the careers of these rarely remembered early-American notables, Leamon has helped illuminate a little-known chapter of the American story.

The following is an excerpt from Leamon’s recent talk in Portland, in which he told the tale of Thompson’s Revolutionary hell-raising. A Brunswick businessman, Thompson was also a politician and itinerant rabble-rouser who meddled in local affairs up and down the settled areas of Maine. Some colonists were sympathetic to him; others hostile. But during the Revolution, Thompson enjoyed his own moments of outright fame:

Samuel Thompson was highly excitable and given to violent rages. The entire Thompson household was, in fact, a chaotic one, as his wife was also prone to violent, unbalanced episodes. When agitated, Thompson had a tendency to stutter. He was very self-assertive, always pushing against authority, always espousing his rough-hewn republicanism. Admirers described the short, stocky, and opinionated leader as “running over with zeal and patriotism”; his enemies would have agreed with the person who called him “a violent highflying stuttering foolish fellow.”…

In 1774 Thompson led an armed mob up and down the Kennebec River to enforce an embargo against Great Britain. It did not matter that he had no legal authority to impose on neighboring towns; he led one hundred to two hundred armed men in a tumultuous search for tea and Tories and threw them both into the river….

In April 1775 an impasse had occurred in Falmouth (now Portland) over the town’s attempts to enforce the trade embargo against Britain. A vessel from England had arrived carrying sails and rigging for a ship that a Tory merchant was completing. But with the embargo in place, the British vessel could not unload the shipment. At the merchant’s request, the royal authorities in Boston sent the British warship Canceau, with Lieutenant Henry Mowat commanding, to Falmouth to protect the merchant and maintain order (its looming presence in the harbor also made it difficult for a nervous Falmouth to enforce the embargo). Meanwhile, news of Lexington and Concord arrived, heightening tensions.

Thompson resolved to end the deadlock if Falmouth leaders could not. Early in May he entered Falmouth with fifty men and seized Lieutenant Mowat while he was ashore. It was not clear how this would resolve the issue. In fact it did just the opposite.

Pandemonium broke out in the town. Canceau’s second-in-command threatened to fire on the town unless Mowat was released unhurt. Panic-stricken residents fled, carrying their possessions in every conceivable sort of conveyance. Town authorities pleaded with Thompson to free Mowat. Meanwhile, some six hundred militiamen from Gorham, Cape Elizabeth, Scarborough, and Windham — armed but poorly disciplined — took over the town, harassing Tories and drinking up their liquor supplies. Falmouth’s militia, meanwhile, was nowhere to be found. Some detachments had marched to Cambridge to join the American army forming there. Others were preoccupied with saving themselves from the destruction expected momentarily.

Falmouth was an occupied town. How to save itself from the wrath of Thompson and his militia on one hand and retaliation by the British on the other?…

Before Massachusetts authorities could rein in Thompson, he himself released Mowat on parole, possibly because there was no alternative. The town quickly apologized to Mowat for the disturbance, and the British commander seemed to understand, so the townsmen feared no retribution. Mowat and theCanceau soon sailed away in convoy with the now-completed Tory vessel, carrying many of Falmouth’s Tories to the temporary safety of Boston.

But that was not the end.

Mowat returned five months later, on October 18, 1775, with a flotilla of vessels and bombarded Falmouth, leveling two-thirds
of the town and destroying most of its shipping — clear punishment for the town’s outrageous behavior.

There is a deeper significance to the incident: Thompson had served to radicalize the community of Falmouth, which by 1774-75 was nervously aware of its exposed situation and unable to enforce the embargo. Thompson, representing the smaller, more “radical” inland towns, had forced the issue. By creating an “incident,” Thompson prompted the British to retaliate so savagely as to force a hitherto wavering coastal population into open resistance against Great Britain.

Thus are revolutions made. 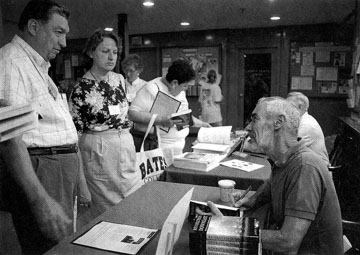 Professor of History Jim Leamon was a popular figure at Reunion 1995, signing copies of his bookRevolution Downeast: The War for American Independence in Maine.