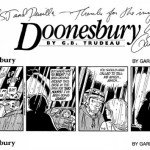 In 1990, Dervilla McCann began her cardiology fellowship in a Navy facility in San Diego the day before Saddam Hussein invaded Kuwait. Two days later, the Navy called up McCann’s husband, Dr. Stephen Meister, for active duty, and within weeks he was sitting in a tent with a bunch of Marines in Saudi Arabia.

“I was a cardiology fellow with two little toddlers, and I didn’t know if my husband was going to come back,” McCann says. “And I began one of the worst seven months of my life.”

The only time she had to herself was around 4 or 5 a.m., when she’d come downstairs and watch CNN to see what her husband was doing. A Sicilian family across the street, the Crivellos, saved the day, essentially adopting McCann and her boys, Liam and Aiden. “I could not have completed the training without them,” she says.

In the desert, meanwhile, Navy doc Meister was getting his back up over the comic strip Doonesbury and its suggestion that Navy personnel in the Gulf were living large on air-conditioned ships while the ground troops breathed sand. He wrote in protest to cartoonist Garry Trudeau, and the two struck up a correspondence — which led to the rare honor of the comic-strip equivalent of guest-star roles in Doonesbury.

“When Steve came home we had these really very, very funny moments,” says McCann. She recalls when, for instance, he first returned home from the war and she went to fetch him at Camp Pendleton’s naval hospital and en route, in the pouring rain, got lost. She finally found him around 3 a.m., standing alone under a floodlight.

“After seven months of separation, where I thought he was going to be dead, the first words I said to him were, ‘Couldn’t you have given me better directions?'” she says.

There were other episodes — Meister’s fascination with the kitchen faucets after seven months without running water, his disorientation in a newly renovated house. “These moments were fresh in my mind when he told me about writing Garry Trudeau,” McCann says. “So I sat down and I wrote this long letter to Trudeau about the things that had occurred since he came home.”

Recognizing good material when he saw it, Trudeau used the couple’s experiences to wind up an extended story arc for his characters B.D. and Boopsie, likewise separated by military service in the Gulf.

Trudeau later sent the pair a mounted set of the strips signed with the message, “Thanks for the inspiration.”