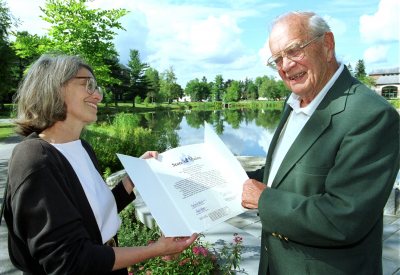 Milton Lindholm, Bates’ dean emeritus of admissions who served the college from 1944 to 1976, has been honored by the Maine Legislature on the celebration of his 90th birthday.

Lindholm was presented with a Legislative Sentiment, sponsored by state Sen. Peggy Rotundo of Lewiston and passed by the Legislature on June 21, 2001.

“Milt is a very special person,” Rotundo said in an interview after the recent presentation on the Bates campus. “Bates has served the sons and daughters of Maine from the college’s very beginning. Milt directed the admissions effort for 32 years and worked hard to recruit so many young women and men from Maine.”

Rotundo, who is the associate director of the Bates College Center for Service-Learning, said Bates owes its strong reputation in Maine to people like Milt Lindholm. “The people of the state of Maine are very proud of Bates College. Milt and his wife, Jane, are important parts of Bates’ reputation. Their service to Bates has helped make Bates a better community, just as their quiet and steady service to Lewiston-Auburn — Milt chaired the Lewiston School Committee for some years — has helped the community in which we live.”

“Be it known to all that we, the members of the Senate and House of Representatives, join in recognizing Milt Lindholm of Lewiston, on the occasion of his 90th birthday. Mr. Lindholm graduated from Bates College in 1935, part of a long and continued line of Lindholms attending the college. He became the Dean of Admissions at Bates in 1944, a position he held for 32 years. In 1989, the building housing admissions was dedicated the Milt Lindholm House in recognition of his exemplary work as the Dean of Admissions. Mr. Lindholm continues to be active with the college. We send our congratulations and best wishes to Mr. Lindholm on his birthday; and be it ordered that this official expression of sentiment be sent forth on behalf of the Legislature and the people of the State of Maine. Given this 21st day of June, 2001 at the State Capitol, Augusta, Maine.”