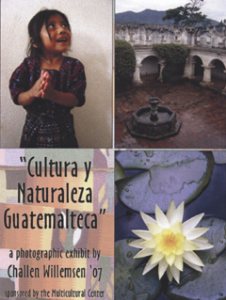 An exhibition of photographs titled Cultura y Naturaleza Guatemalteca (Culture and Nature in Guatemala) by photographer Challen Willemsen, a first-year Bates College student from Guatemala City, Guatemala, is on display through March 26 in the Chase Gallery, Chase Hall, 56 Campus Avenue. The exhibit opens with a gallery reception featuring food and music from Guatemala at 7 p.m. Friday, March 12. The public is invited to attend the reception and the exhibit free of charge. Call 207-786-8376 for more information.

The display features approximately 40 photographs of orchids and other Guatemalan floral species, cultural representations, architecture and people. As a high school student, Willemsen attended the American School of Guatemala, where he developed an interest in the country’s orchid species. He began his own collection that now amounts to more than 3,000 plants. As his interest in the plants grew, he began to photograph them and to create a large database. Eventually, says Willemsen, an environmental studies major with an expected minor in Latin American history, he hopes to publish the entire collection as a field guide to Guatemalan orchid species.