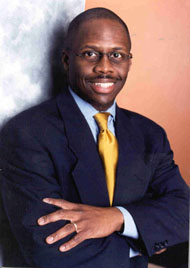 Bates College presents a talk by Benjamin E. Robinson III, a member of the college’s class of 1986 and the chief privacy executive for Bank of America Corporation, at 7 p.m. Monday, May 3, in the Muskie Room of the Edmund S. Muskie Archives, 70 Campus Avenue.

Presented by Bates’ Distinguished Alumni in Residence program, the talk is open to the public at no charge. For more information, please call 207-786-6232.

As a senior vice president and privacy executive for Bank of America, Robinson is responsible for developing, implementing and communicating policies regarding the protection and use of customer information for that financial institution. Robinson was formerly senior vice president and strategy management executive at Bank of America, in charge of public policy issues, national alliances and national programs.

Before going to Bank of America, he was chief privacy officer for MasterCard International and president and CEO of MasterCard Cardholder Solutions. Robinson was recently appointed to the Consumer Advisory Council of the Federal Reserve Bank and serves on the faculty of the Hagan School of Business at Iona College.

At Bates, Robinson was a rhetoric major, a debater, vice president of the student government and a three-sport athlete. He holds a doctoral degree in banking and finance from the Union Graduate School, and is the author of Financial Privacy and Electronic Commerce: Who’s in My Business (Writers Club Press, 2000).

Robinson and his family reside in Charlotte, N.C.

The Distinguished Alumni in Residence program at Bates is funded by the College Key.