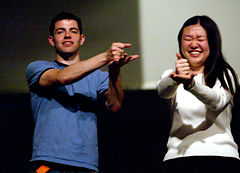 Tereus in Fragments: A Lost Play of Sophocles, a dramatic version of one of the more disturbing myths from ancient Greece, premieres on the Bates College stage in performances at 8 p.m. Friday and Saturday, May 16 and 17, and 2 p.m. Sunday, May 18, in Gannett Theater, Pettigrew Hall, 305 College St. Admission is $6 for the general public and $3 for students and senior citizens.

Lisa Maurizio, an assistant professor in the Bates classics department, has written a tragedy based on the myth of Tereus, his wife Procne and her sister Philomela — a story of love, memory, betrayal, revenge and divine intervention.

For Maurizio, Tereus began as a collaboration with Ellen Seeling, an assistant professor on the theater faculty who was scheduled to direct but has withdrawn due to illness. Maurizio, who collaborated with Seeling on a 2001 production of Prometheus Bound, says that working with this talented, imaginative designer and director has “totally transformed” her capacity for interpreting ancient tragedies.

John Ambrosino, a student of Seeling in the class of 2001 and the founder and artistic director of the Boston theater company the Animus Ensemble, is filling in for Seeling as director of the all-female, all-student cast. “She has basically taught me everything I know of the theater,” Ambrosino explains, “and I consider her my greatest mentor in modern theater.”

In Tereus, Ambrosino’s style is distinguished by the use of stylized gestures and line readings, as well as supporting effects like percussion and shadow puppetry, to throw Maurizio’s content into high relief. “The characters are not human; they’re archetypes,” Ambrosino says.

“There’s an otherworldliness to the play,” he says, that begs not to be interpreted in a naturalistic style.

In Greek myth, Tereus and Procne are married and have a son, Itys. When Procne asks to see her sister, Philomela, Tereus fetches her — but on the voyage back, rapes Philomela and cuts out her tongue. Philomela nevertheless is able to inform her sister of Tereus’ treachery by weaving images of it into a tapestry and giving it to Procne.

In retaliation, Procne and Philomela kill Itys, cook the child and serve him to an unwitting Tereus. Tereus’ attempt to avenge himself prompts the intervention of the gods, who transform the three into birds: Procne into a nightingale, Philomela into a swallow and Tereus into a hoopoe (a Eurasian species named for its call).

Where Hollywood characters resolve bad situations through personal growth and hugs, the ancient Greeks were less optimistic about the human capacity to solve their dilemmas, Maurizio says. In their point of view, “human beings are profoundly limited in their understanding, and sometimes their emotions and desires lead them into places where they cannot save themselves.”

At which point the gods sometimes take pity and bail them out. “They don’t restore them, they don’t redeem them,” says Maurizio, “but they remove them from their suffering.”

The story was known to the Greeks as a play by Sophocles — of which only 57 lines now exist in scattered fragments — and to the Romans from Ovid’s Metamorphosis. Shakespeare borrowed elements from it for Titus Andronicus, and an adaptation by a British playwright premiered in New York last fall.

In addition to Sophocles’ fragments, Maurizio looked to Iranian women’s poetry and Japanese drama, a particular interest of Seeling’s, for her inspiration. For her, unlike other interpreters of this story, the issue of male violence is not its most dramatically compelling aspect. “What I more explored was the love story between two sisters, and the dangers of remembering and dwelling on the past when the present is destitute,” she says.

In addition, the symbolism of Procne and Philomela’s plight is a reminder that in ancient times — and even today, in some ways — “women’s lives, and their rhythms and their meanings, are still opaque because they’re not part of the public realm.”