Noblitt is front and center during rescue at sea 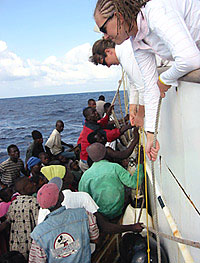 When a sailing ship carrying 22 college students on an educational voyage in early March rescued 49 Haitians from their disabled vessel, a Bates sophomore was right in the middle of the widely reported story.

Doing an off-campus study program with the Sea Education Association, G. Carl Noblitt IV was the junior watch officer aboard the SSV Corwith Cramer who first sighted the Haitian sailboat on March 9. And when the Cramer carried the Haitians to Jamaica, their original destination, it was Noblitt who steered the 134-foot brigantine into Port Antonio.

The Haitians, later quoted in a Jamaican newspaper as hoping to find better living conditions in Jamaica, had been at sea for five days when Noblitt’s ship encountered them. With no rescue services within easy range and the Haitians — more than a dozen of whom were children — out of food and water, there was no question of leaving them to their own devices, says Noblitt, of Boxford, Mass.

“We just realized, ‘Man, these are lives that we don’t want to lose,'” he says. “And the fact that they actually piled themselves into a boat to make a better life for themselves — man, there was a lot of drive in them.”

Coming from 10 states and 18 colleges or universities including Bates, Noblitt and his fellow students were aboard the Cramer for the SEA Semester, a challenging interdisciplinary program that follows six weeks in the classroom with six at sea. The students and the vessel’s crew of 11 were in the fifth week of their voyage, which concluded in Key West on March 19.

The ship was riding at anchor while students and the ship’s science staff took core samples from the Caribbean floor. Noblitt was midway through his watch when he sighted the Haitian vessel slowly approaching. What at first appeared to be a routine encounter — ships passing at mid-morning, so to speak — soon took on a different aspect.

“We were a little nervous, having a preconception about pirates from our classes,” says Noblitt. “We saw only men at first, because they were protecting the women in the middle of the boat. And then we realized they were in need.”

The Haitian boat, barely large enough for its occupants and under oar power, drew closer and closer to the Cramer, which was immobilized by its deployed sampling gear. The Haitian boat finally brushed the larger vessel’s bowsprit, knocking down what was left of its mast.

By then, the situation was becoming clear through communications shouted between the vessels. Only one person aboard the Cramer, a student, spoke French well enough to talk in any detail with the Haitians. Neither U.S. nor Jamaican maritime authorities were able to get rescue vessels to the scene quickly, and in radio consultation with them, medical advisers and the SEA headquarters in Woods Hole, Mass., the Cramer’s Captain Steve Tarrant decided to bring the Haitians aboard and carry them to Jamaica.

The Americans accommodated the group at the bow, jury-rigging a head and providing food, beverages and blankets. “It really shocked everyone to see the young children, the babies in arms,” Noblitt says.

Under both sail and motor power, the 18-year-old Spanish-built Cramer finally made port around 2 a.m., with Noblitt at the wheel. Among both the Americans and their guests, “there was an intensity in the air as we approached Jamaica,” he says.

The following day, the Kingston newspaper Jamaica Observer reported that the Cramer group brought to 268 the year’s total of Haitians arriving by boat in Jamaica, fleeing the political chaos and bleak economic prospects at home.

The paper, which counted two more Haitians among the rescued than did SEA, reported the group’s makeup as 17 children between the ages of 1 and 8, eight women and 26 men, of which two women and three men are returnees who were sent back to Haiti last year. Pronounced in “good physical condition” by medical authorities, the refugees were sent to join other Haitian refugees in temporary quarters before sending them to a larger holding facility pending resolution of their cases.

For Noblitt and his peers on the Corwith Cramer, the episode was eye-opening. “We get the stories in the papers and so forth about these particular rescues,” he says. “But a lot of other boats have gone down and haven’t had the rescues, and that’s something we all were discussing and thinking about on the boat.”

Because of the core-sampling gear that kept the Cramer stationary, “we were actually put in the position that they were going to come to us no matter what,” he says. “And we felt there was a significance to that.”