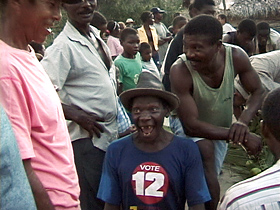 The Bates College Office of Multicultural Affairs presents a two-day film series titled Political Films from the African Diaspora on Wednesday, Oct. 25, and Thursday, Oct. 26, in Rooms 104 and 105 of the Olin Arts Center, 75 Russell St., Bates College. The public is invited to attend the screenings free of charge. For more information, call 207-786-8376.

The schedule for Wednesday, Oct. 25, is as follows:

The film that helped reopen one of history’s most notorious cold-case civil rights murders resulted from the director’s 10-year journey to uncover the truth. In August 1955, Mamie Till-Mobley of Chicago sent her only child, Emmett Louis Till, to visit relatives in the Mississippi Delta. Only eight days later, Emmett was abducted from his great-uncle’s home, brutally beaten and then murdered for one of the oldest Southern taboos: whistling at a white woman in public. It was director Beauchamp’s nine years of investigation, summarized in the film, that was primarily responsible for the Justice Department’s reopening the case. Produced and directed by Keith A. Beauchamp. 2005, 115 minutes, in English.

This documentary traces the history of U.S. imperialism and indifference in the Caribbean and South America, portraying the poverty and violence that ravage Haiti. The film presents a stark look at the country whose 19th-century origins as the world’s first independent black republic have been obscured by decades of harsh repression. Directors: Rudi Stern, Katharine Kean. 1992, 56 minutes, in English.

This film presents the rise and fall of legendary African leader Patrice Lumumba. When the Congo declared its independence from Belgium in 1960, the 36-year-old, self-educated Lumumba became the first prime minister of the newly independent state. Called “the politico of the bush” by journalists of the day, he became a lightning rod for Cold War politics as his vision of a united Africa gained him powerful enemies in Belgium and the United States. Lumumba would last just months in office before being brutally assassinated. The film vividly recreates the shocking events behind the birth of the country that became Zaire during the reign of Lumumba’s former friend, Joseph Mobutu. Directed by Raoul Peck. 2002, 115 minutes, in English- dubbed.

The film portrays rural communities in Brazil that were either founded by runaway slaves or begun from abandoned plantations. This type of community is known as a quilombo, from an Angolan word that means “encampment.” As many as 2,000 quilombos exist today. The film has three distinct settings: the Trombetas region of the Amazon, Marajo Island at the mouth of the Amazon River and the Itapicuru-Mirim area in the state of Maranhao. The film offers a glimpse into these communities, with extensive footage of ceremonies, dances and lifestyles interwoven with discussions about their history and the issues most important to them currently. Directed and produced by Leonard Abram, narrated by Chuck D, 2006, 73 minutes, narration in English; depictions of the Quilombo villages contain discussions in Portuguese, subtitled in English.

The schedule for Thursday, Oct. 26, is as follows:

Inspired by true events, the title comes from the name of one of the shelters that house the remarkable women scapegoated as witches. A rousing story of women’s courage in the face of patriarchal injustice, the film conveys both an impassioned political stance and the extraordinary resolve of its two central characters, a mother and daughter battered but unbroken in their refusal to bow before ignorance.  Directed by S. Pierre Yameogo. 2005, 90 minutes, in Mooré and French with English subtitles.

This film tells an amazing scholarly detective story reaching across hundreds of years and thousands of miles from 18th-century Sierra Leone to the Gullah people of present-day Georgia. It recounts the even more remarkable saga of how African Americans have retained links with their African past through the horrors of the Middle Passage, slavery and segregation. This is how the memory of a family was pieced together through a song with legendary powers to connect those who sang it with their roots. Directed by Ángel Serrano & Alvaro Toepke, narrated by Vertamae Grosvenor. 1998, 52 minutes, in English and Mende with English subtitles.

This powerful and uncompromising film depicts the clash between entrenched cultural and religious tradition and modern secular society over the issue of female genital mutilation in a West African village. Six girls refuse to take part in the “purification” ritual. Two run away to an uncertain fate and the remaining four are sheltered by a woman who is known to have mystical powers and has given the four girls the “moolaade,” the spell of protection. Directed by Ousmane Sembene. 2004, 124 minutes, in French and Jula with English subtitles.
8:45 p.m. In Olin 104
Falasha:  The Exile of the Black Jews

Ethiopia’s Jewish community known as Falasha, or “strangers,” lived in isolation for centuries, practicing an ancient, pre-Talmudic form of Judaism that, according to tradition, traces its origins back to Solomon and Sheba. These long-suffering Jews have undergone centuries of abuse at the hands of Ethiopian citizens who refuse to accept the minority group as part of their culture, leading to interminable feuds and daily conflicts. This compelling documentary uncovers startling truths about the citizens of the impoverished country. Directed and produced by Simcha Jacobovici. 2004, 80 minutes, in English.

Trying on for size