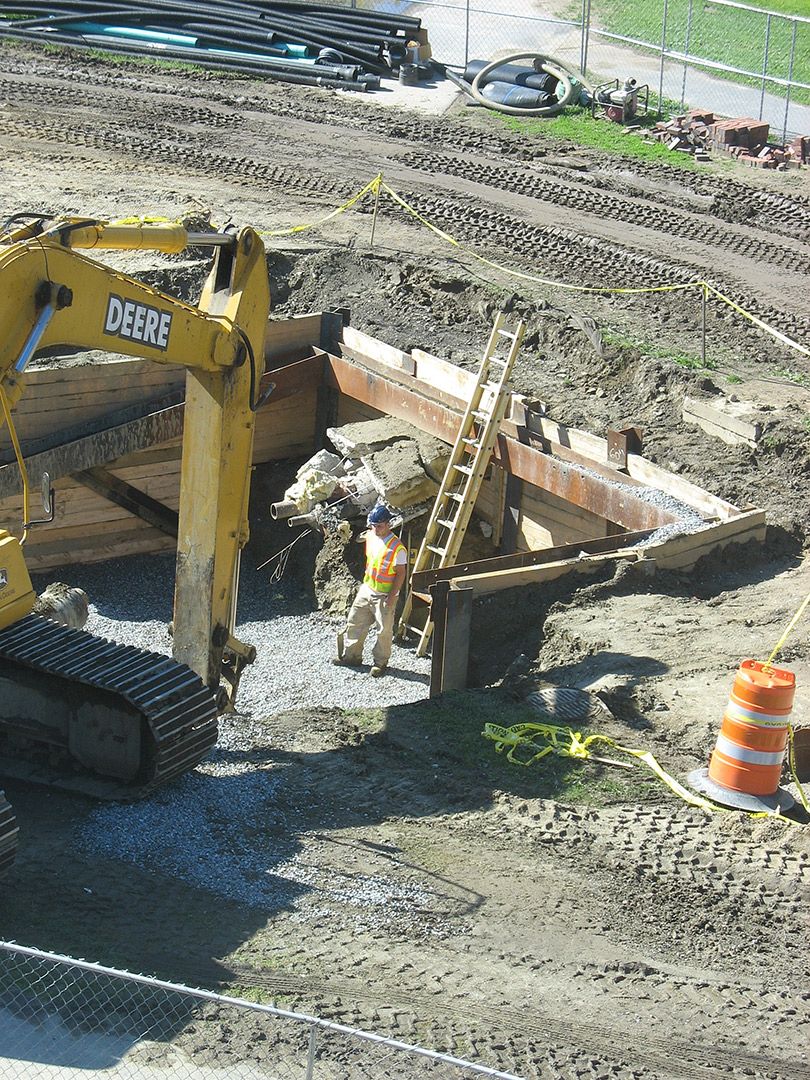 After nearly two months looking like a battlefield with its mud, dust, broken roots and debris, the 2.5 acre Alumni Walk site will soon sprout a bit of soothing green.

According to project manager Paul Farnsworth, a handful of paper birch trees will be planted along the south edge of the site starting next week. These are a sort of advance guard for the 178 birches that will ultimately grace the Walk. They are coming from a nursery in Biddeford that is tending them for Bates.

The tree plan has changed, Farnsworth noted. Originally, the trees and other finishing features were to be rolled out in block-like zones progressing from west to east. The new plan is to work in strip-like zones going south to north. Planting will be slow at first, Farnsworth cautioned. Still, it’ll be nice to see trees there again.

In other Alumni Walk news, small connecting paths criss-crossing the Walk will be paved with asphalt starting June 7. But, if we may indulge a prejudice: asphalt, schmasphalt. If you are building for the ages, you should make like the Romans and pour concrete. In that spirit, nearly all the concrete retaining walls are finished for the bankings that are being rebuilt between buildings along the Walk. 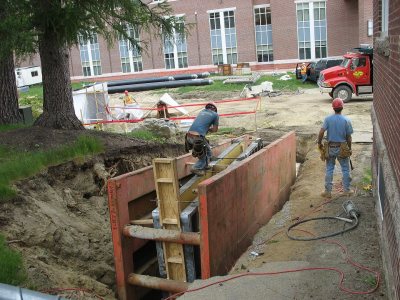 Workers set a “trench box” where a retaining wall is being built next to Hedge. (Doug Hubley/Bates College)

The last wall is at the site of the new amphitheater, between Lane and Pettengill (“retaining wall A,” if you’re keeping track). Its footer will be poured next week. Unexpected utilities work slowed that job a bit.

June 7 is also the day workers expect to start a concrete base at the Walk’s College Street entrance. An apron of paving stones will eventually cover the base.

New student housing: On College Street itself, watch for possible lane closures the week of June 11, as local contractor Gendron & Gendron starts creating the big speed table (asphalt!) that will extend Alumni Walk across to the new student housing. The crossing will occupy more than 100 feet of the length of College Street, traversing the entrance to Mountain Avenue.

It’s for safety, Wichroski said. “Drivers fly through there” now, but painted markings at the crossing, and new flashing lights near Ware and Frye streets, will warn them to slow down. 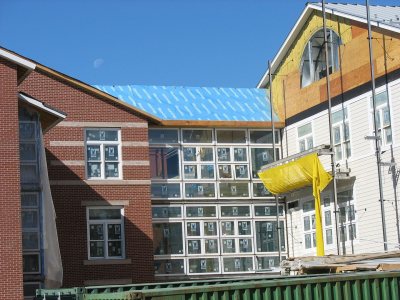 A bridge at the new student housing. (Doug Hubley/Bates College)

Meanwhile, on the west side of College, the clock is ticking for the new student housing, scheduled for occupancy in August. “You get 90 percent of the work done,” project manager Pam Wichroski laughed, “and the last 10 percent seems to take as long as the first 90.”

The focus these days is on finishing the metal roof and installing the few remaining windows. The roof, especially, is an invitation for impatience: While the flat expanses are pretty much decked over with ribbed metal panels, the “Freedom Gray” copper sheets covering the dormers need tedious fitting and soldering.

Still, what you can see of the residence from the road looks quite complete. The brick walls on the wings are done, the faux clapboards on the center section virtually done, and following close behind are the window-walls of the living rooms and the bridges that link the center section and wings. 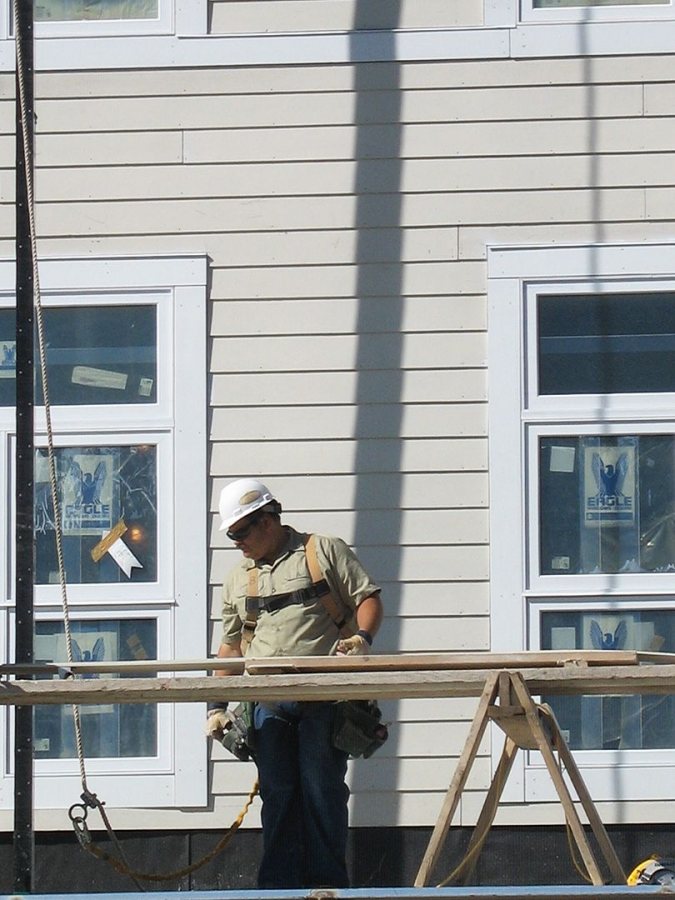 The pace of what insiders call “site work” is quickening, too. Bricklayers have begun a screen wall and the barbecue in the courtyard next to Rand Hall. Subsurface structural pieces, such as footings for granite steps at the southeast entrance, are going in. And, Wichroski noted, plantings have been selected for placement by early July.

Engineers from Harriman Associates, the architectural firm that is commissioning the building for Bates, are into their busiest days of systems testing. In something of a milestone, Wichroski added, the process of phasing in the permanent electrical feed, as opposed to temporary hookups, has begun.

Inside, the end is in sight. Stairwell walls are being finished. Wall painting and floor covering moves apace, as workers install shelving and other millwork, light fixtures, doors and the radiant heating panels that go onto the ceilings.

Incidentally, Wichroski noted, the residence will lead Bates into using “green” cleaning supplies and paper products. And the Bobcat logo will proudly grace each of the building’s 41 toilet paper holders, 58 soap dispensers and 19 paper towel holders.

Question of the week: Why is so much of the lawn in front of Rand Hall fenced off?

Answer: Pam Wichroski says that in past years, that lawn was used for parking by departing students and people involved in Reunion events. But last year, as work on the new housing was getting under way, an underground stormwater detention basin was placed there, and the weight of vehicles would damage the basin. 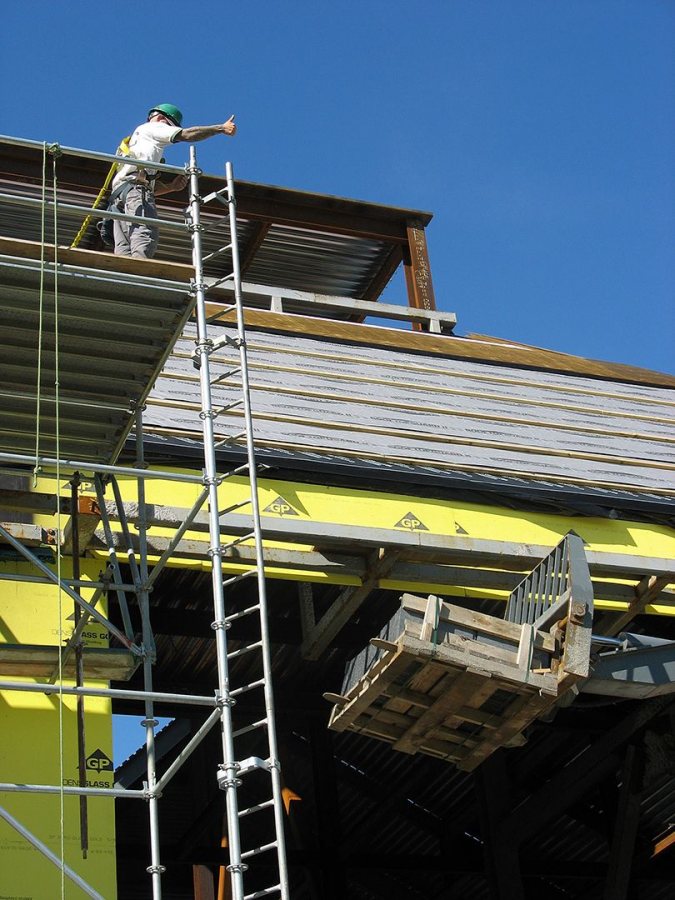 Lifting slate to the roof of the new Commons. (Doug Hubley/Bates College)

“We didn’t want to depend on the new granite curbing to curb the trend,” Wichroski said.

New dining Commons: As we reported in the previous Update, progress on the new Commons has reached that peculiar state where the workers are “really going at it,” as project manager Farnsworth said — but there isn’t much news.

The highlight, Farnsworth reported, is the arrival of two new trades at the Commons: technicians to start roughing in telecommunications and building-controls infrastructure. They join the plumbers, electricians and others who have been buzzing inside this beehive for months. Also inside, drywallers have picked up the tempo on the first floor, and framers are installing steel wall studs.

Masonry remains the watchword for the exterior. (Although the dull-black spray-on weather barrier covering much of the surface is also impressive.) Placement of roof slate has accelerated as workers move out of cramped corners and into broader expanses. Bricklaying continues on the east wall, and workers continue to ring the building with the black granite that forms the base of the outer wall. 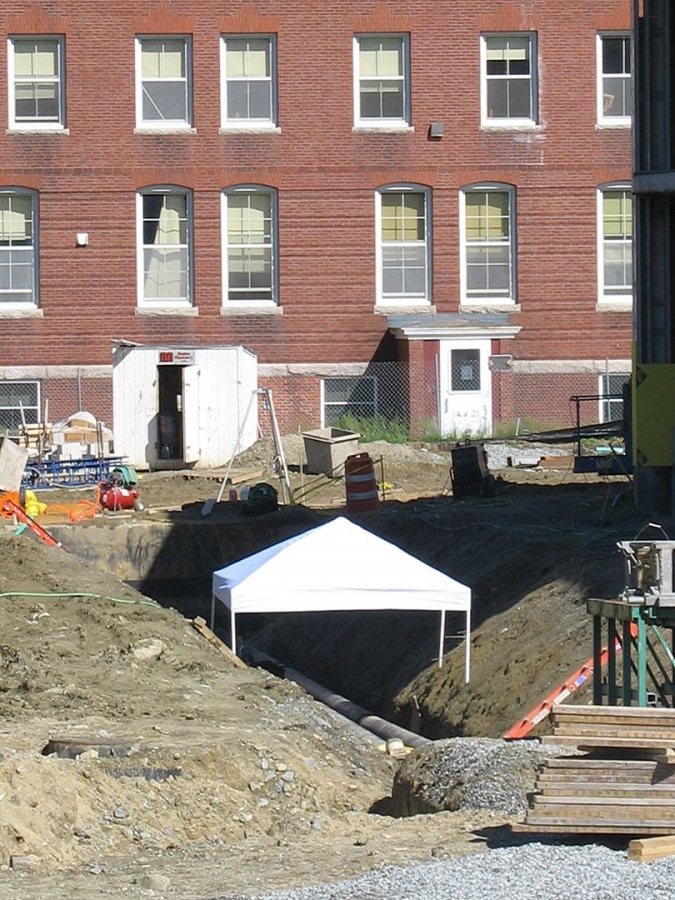 Complete with a tent to shield workers from the sun, this steam-line trench is south of Commons. (Doug Hubley/Bates College)

Notes from underground: The new Commons, by the way, plays a role in the campus steam-heat system. The entire system is a loop: steam goes out through big pipes and steam condensate, known to us laypeople as water, returns to the steam plant through smaller pipes.

Currently, only Pettengill Hall has a pump to push condensate back to the plant and a generator to keep the pump pumping if the electric grid goes down. That’s important, Farnsworth said, because if the water weren’t returned, “we’d have to dump it down the drain, which is expensive in terms of chemical treatment.”

But the new Commons will also have a pump and generator.

The installation of a new steam connection for Alumni Gym will continue into mid-June, Farnsworth said. Currently there are big trenches between the new Commons and the gym, where lines are already in place; and through the gym’s parking lot next to Central Avenue.

“The contractor wants to get it done because it disrupts movement around the building,” Farnsworth said.

Finally, in a change of plan, the planting of the Leahy Field steam vault has been delayed. That’s vault No. 5 — and there will be a quiz. 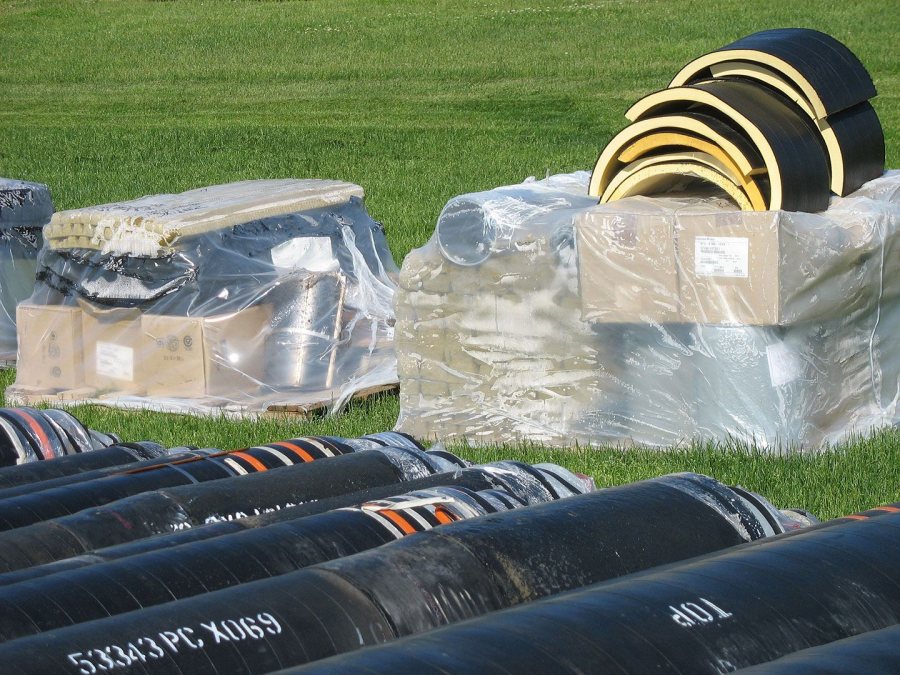