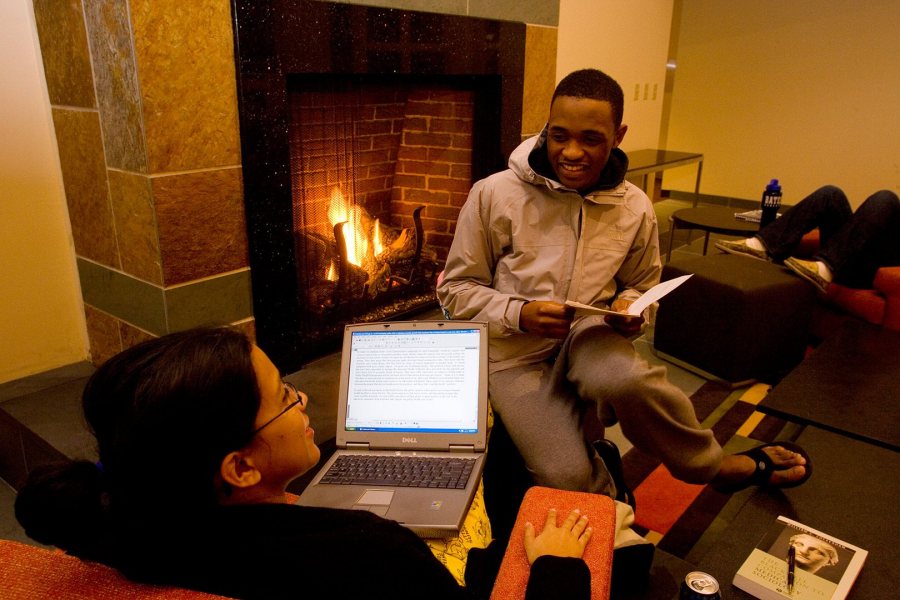 The new dining Commons should be open for business when students return from break on Feb. 25, project manager Paul Farnsworth reported. And it’s hoped that construction work will be complete about a month prior to the opening.

While there’s still plenty to do on the 60,000-square-foot facility, recent progress has been “amazing,” Farnsworth said. “You walk through and notice things, and it’s like, ‘When did they do that?’ ” 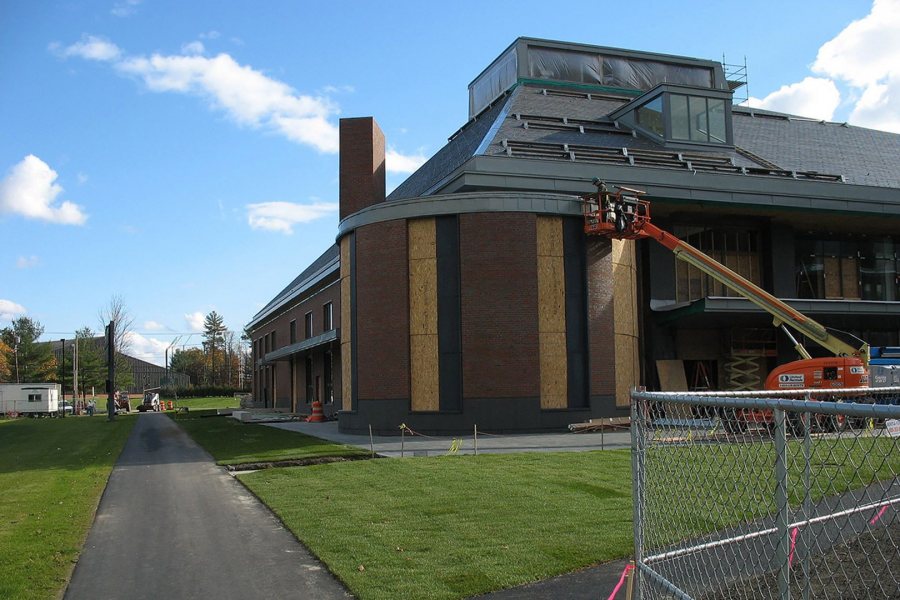 The construction site is fenceless along the Commons’ north face.
(Doug Hubley/Bates College).

“If there’s something they can do without being in the way of something else, it’s being done,” he said.

So, for instance, the wiring for the public address system is in place. Sprinkler heads are being installed. Even shelf brackets in custodial closets are being hung.

But the biggest news may be that meetings have begun in anticipation of the building’s commissioning — the process of bringing in a third party to test mechanical, electrical and other systems. As with the new student housing, the local architecture firm Harriman Associates will perform the commissioning. 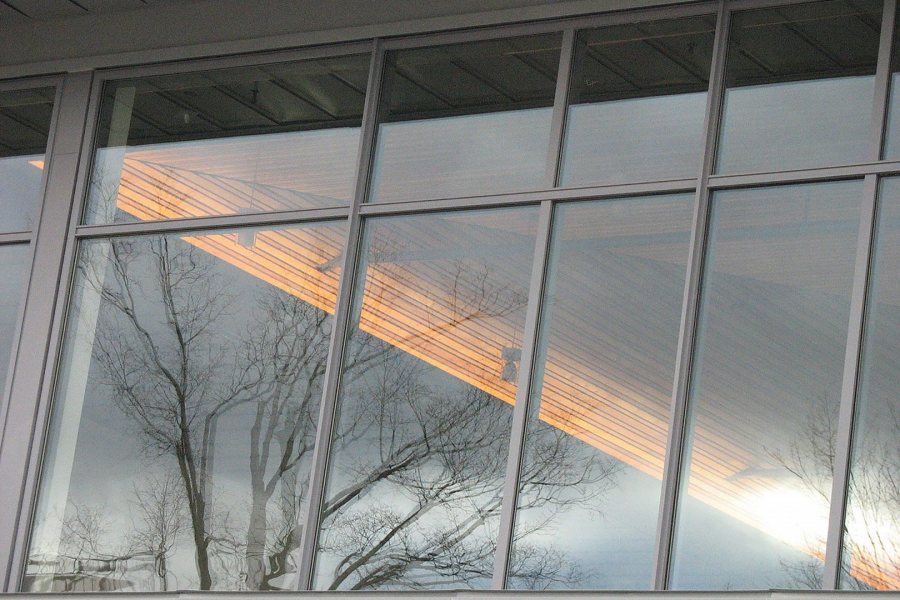 Other big news? Heat from the campus steam plant was turned on in the new Commons during the last week of October. “It was a big milestone,” Farnsworth said. And on Nov. 5, the emergency generator’s diesel engine was tested. That was significant for the entire campus, since a set of electric pumps that return “used steam” — condensate — to the central steam plant is located in Commons. If electricity goes out during a winter storm, at least there will be heat.

The decorative recycled-wood ceiling veneer over the main dining area is complete, although, as Farnsworth reminded us, “there’s a difference between complete and accepted.” Let the tweaking begin. Light fixtures in that area are being installed, too. “They hang down, so it adds depth to the ceiling,” Farnsworth said. “It looks nicer” than the unadorned wood strips. 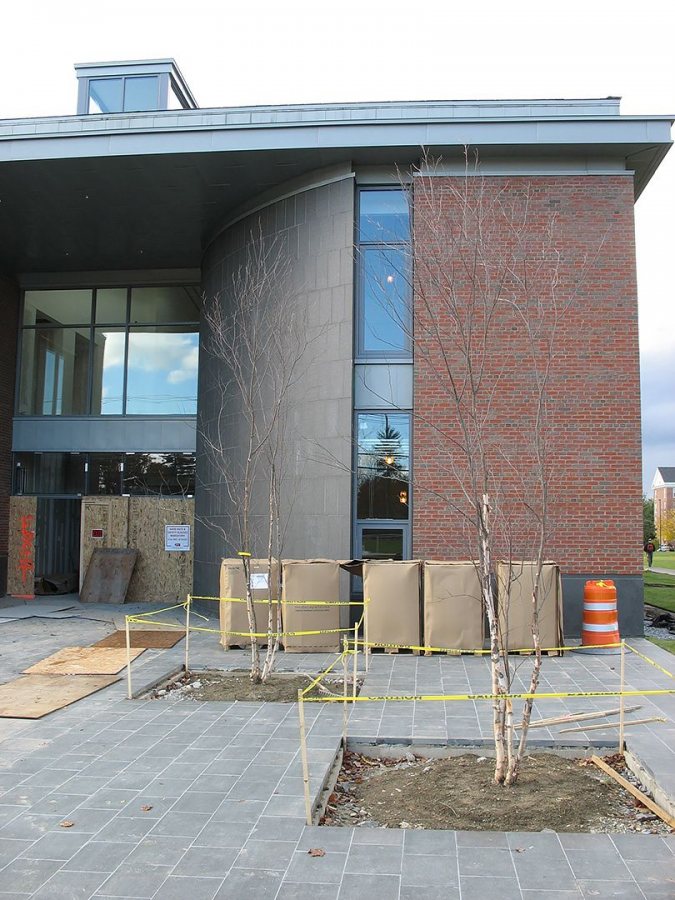 Nearby, the wall tiles in the servery are virtually finished. Black granite veneer has gone up in a number of interior sites, from the shaft leading up to the central skylight to the space around the grand staircase near the dining hall. And construction of that staircase itself is well along.

Meanwhile, Farnsworth expects delivery of only two more tractor-trailer loads of kitchen equipment, both this month.

High atop the building, the first section of the central skylight should be installed in the boxlike ventilation monitor by Nov. 12, Farnsworth said. Most of the building’s windows are in place, with the fireplace lounge glass being the major section still outstanding.

Meanwhile, at ground level, the construction fence is gone from the worksite bordering Garcelon Field, and sod has been laid there.

Around the corner near the east entrance, trademark Alumni Walk paper birches have been planted. Sitting nearby, their roots bundled up, waiting to be planted, are several serviceberry trees (aka juneberry, shadblow, shadbush or Amelanchier canadensis). Stored near Central Avenue now, they’ll actually be planted in a new garden visible from the dining hall, near the Class of 1910 Gate.

The serviceberries are highly decorative trees that leaf out early in spring and make an attractive white fuzz in the process. They also produce edible berries in the summer (if you’re just too hungry to struggle onward to the Commons) and showy foliage in autumn.

The trees will be set in a field of smooth, small black stones, echoing the dark gray granite that is such a dominant motif, and a new one to Bates, on the Commons and Alumni Walk. Similar small stones, Farnsworth noted, will be laid on the small awning-like roofs around the building. The idea is to mask gunk that accumulates in such areas over time and that would be visible from higher windows. 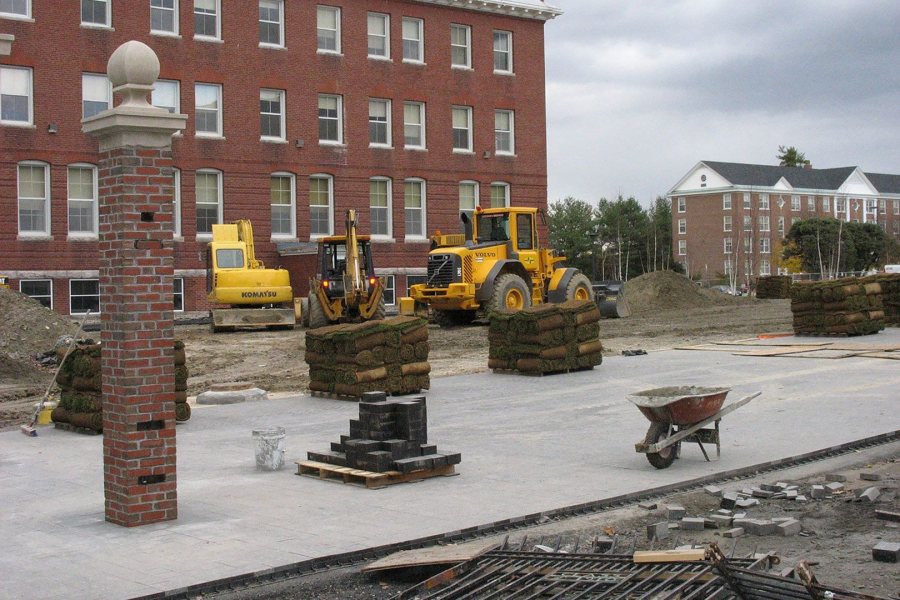 Turf stacked near the plaza at the 1910 Gate. (Doug Hubley/Bates College)

Readers write: Helon Hoffer ’08 had a question about the asphalt pavers on the wider of Alumni Walk’s two main paths. This 20-foot-wide lane is divided lengthwise into two patterns. “Why is it split like this?” Helon asked.

Farnsworth responded: “The concept for Alumni Walk was two 10-foot-wide parallel paths. However, emergency vehicle access required us to make one path 20 feet wide. So we kept the concept of the two 10-foot paths through the pattern in the paving. Half of the 20-foot path is paved the same way as the 10-foot path.” 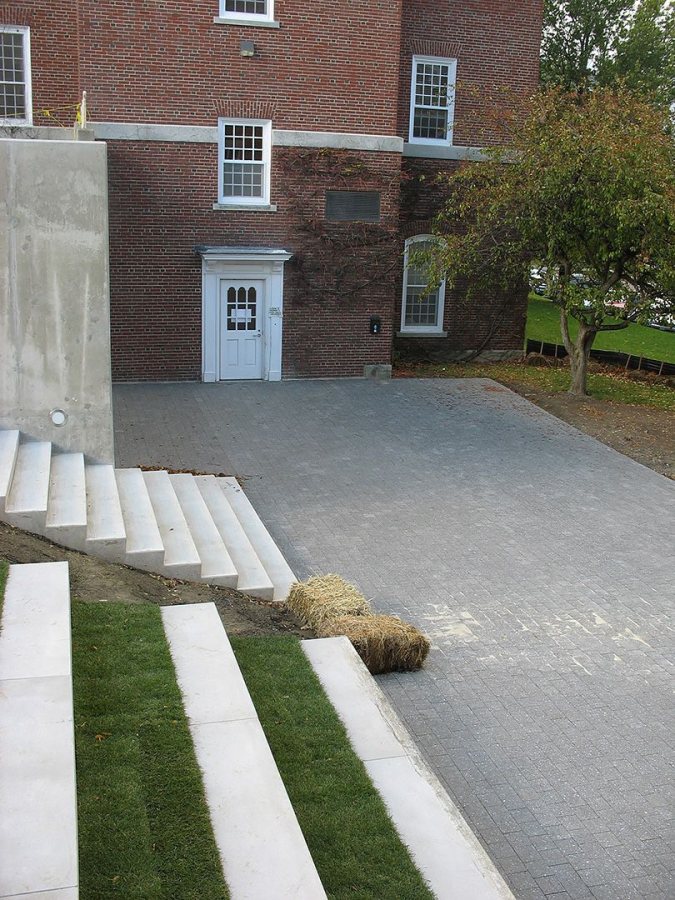 The amphitheater’s base at Lane Hall. (Doug Hubley/Bates College)

Alumni Walk: Although it’s virtually complete, the last section of the walk, stretching 240 feet westward from the new Commons, remains fenced in to protect the new grass. (New grass elsewhere in the vicinity hasn’t been so lucky, as protective string cordons have been yanked out and the emerging sprouts trampled in spots.) The fence will be removed “before winter really hits,” Farnsworth said.

So there’s at least one reason to look forward to winter.

Within the fence, a wide lane of asphalt pavers extends the Commons entrance plaza southward to join, via the reconstructed 1910 Gate, the Alumni Gym service road.

Finally, the amphitheater occupying the banking between Lane and Pettengill halls is about done. All that remains is some finish paving around the plaza at its base, the placement of grass around the big concrete risers, and the installation of a handrail along the staircase.

Those steps, which go from the Lake Andrews parking lot to Alumni Walk, will be electrically heated to keep snow and ice from building up. “With the numbers of people that use that and the length of a snowstorm, you could have someone there sweeping them continuously,” Farnsworth explained. “It just made sense from a safety standpoint to melt the snow off.” 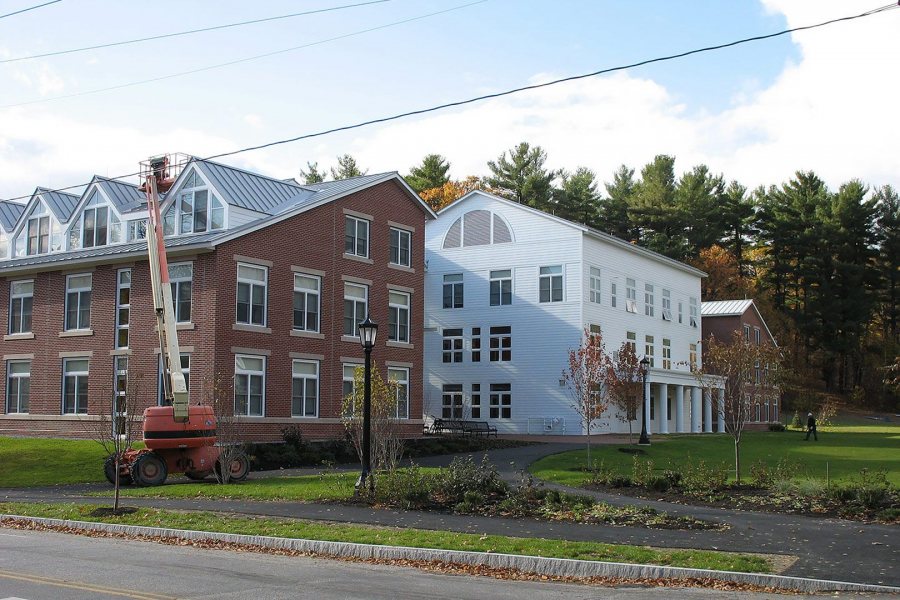 Not quite, she replied. But we’re getting there. The exterior wood ceilings underneath the bridges — midair breezeways that link the building’s three sections — are about finished. But the ceiling sections that abut the buildings still need to be closed up with an insulating exterior coating resembling plaster.

Beyond that, and details like signage and pavement stripes, much of what remains is what insiders call “punch-list items” — details that were revealed, by the punch-list inspection, to need more work. For example, Wichroski offered tasks like “touching up drywall and paint, cleaning paint off things that paint doesn’t belong on, touching up seams in carpeting that we didn’t think were all that great. Minor things.”

“We’re moving from the east flanker,” or wing, “doing the punch-list, and then we’ll go to the west flanker,” she said. “Each side’s taken about two weeks to do. And then there’s the center building — a lot of that work, we’re going to try to hold off on until Christmas break. We don’t want them doing any work while finals are going on.” 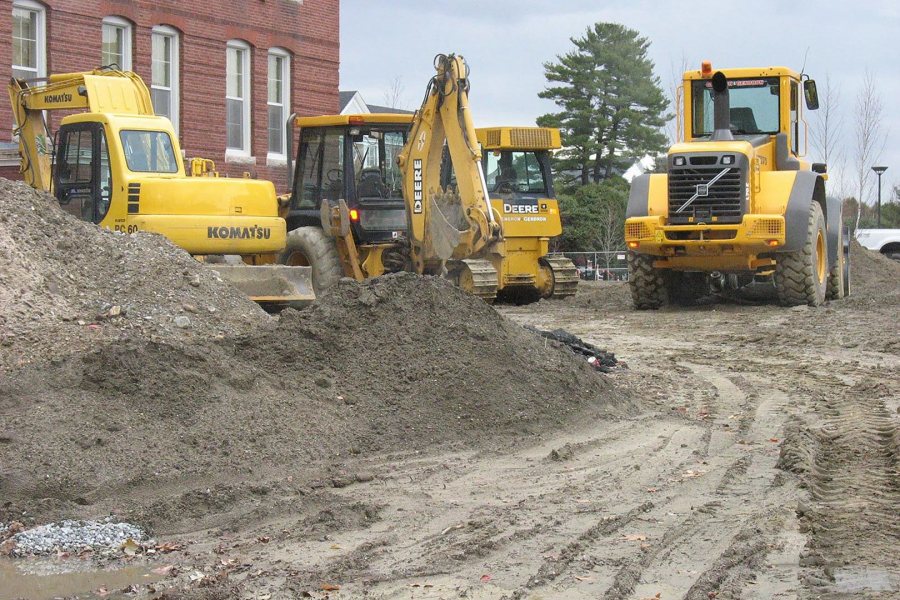 And after that? “The intent is that this phase is final. So they’re going through and then we’ll take a look at it again, and hopefully this time through that’s it. They’re done.”

Stay tuned, and have a happy Thanksgiving. Campus Construction Update returns the week of Nov. 26.

Can we talk? What do you think about the campus improvements process? What would you like to know about it? What do you know that we don’t? We want to hear from you, bub. Please e-mail your questions and comments to Doug Hubley, with “Construction Update” in the subject line.

Our back pages: See an index of earlier Campus Construction Updates. We aim to publish every other week. 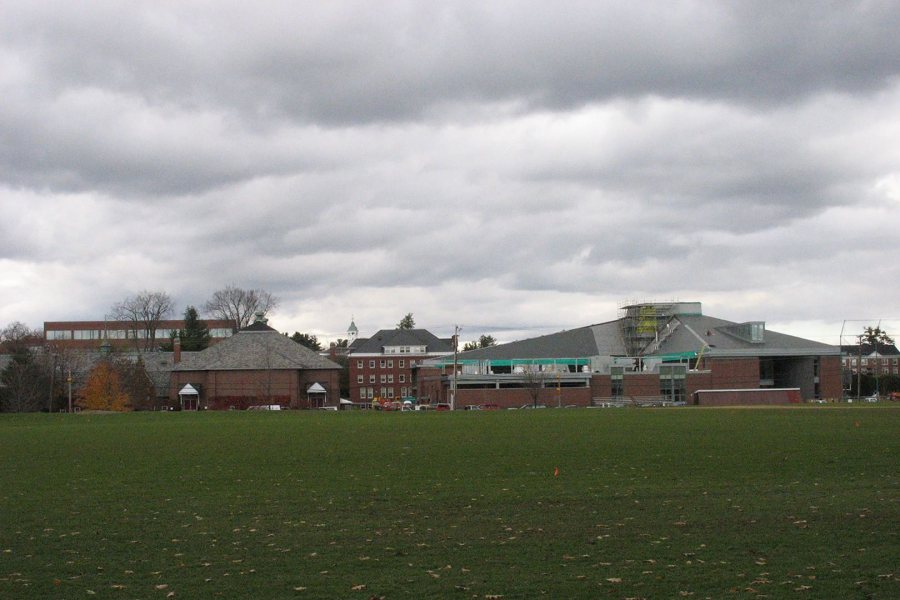 The Plot, Chapter 1: Celebrating the harvest, contemplating next year