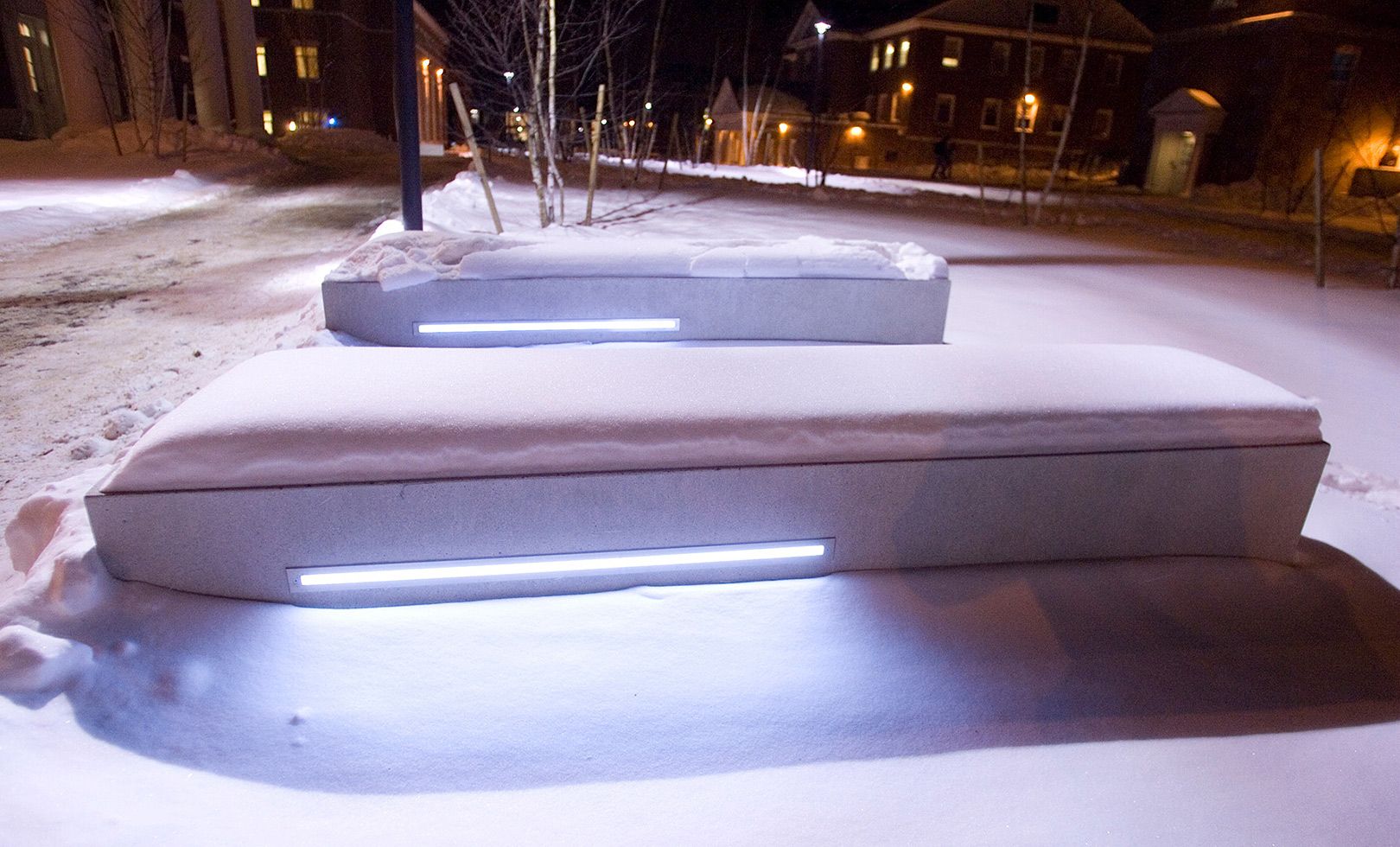 If the schedule holds, in about 10 weeks Dining Services will serve the first meals in the new Commons.

“It’s going to be a fabulous facility,” Dining Services director Christine Schwartz told Campus Construction Update during a conversation about the transition from old to new. Her office, just inside from the loading dock at the old Memorial Commons, was a jumble of cardboard boxes packed, stacked and labeled for the move.

“I can’t tell you what an experience it is to have something start on paper” — she waved a hand at a tall carton bulging with rolled-up building plans — “see the outline of it in the foundation, and then see the walls go up, and then the equipment goes in.

“To see it actually come to life and start to breathe is a once-in-a lifetime experience.” 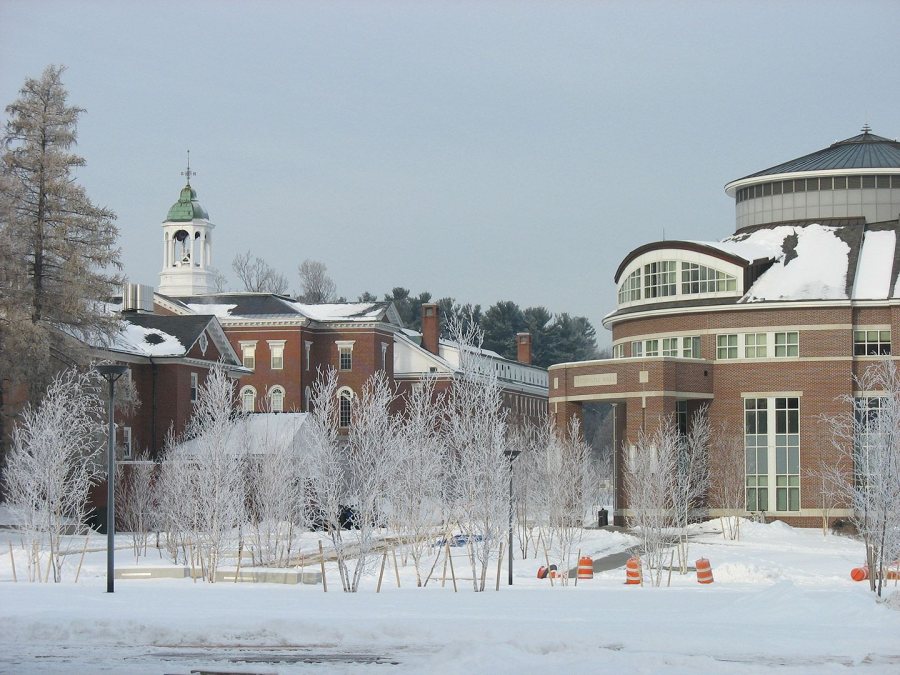 While some moving could begin as early as Dec. 26, Dining Services expects to take possession of the facility in late January, with training slated for two or three weeks thereafter.

The bulk of the move comes next, from Feb. 15 through 17, the beginning of Bates’ winter recess. Once the health inspector has looked things over, Schwartz anticipates that by Feb. 20 or so the facility will be ready to dish up. It will be a “soft opening,” with most students and many staff and faculty away.

“We’ll be inviting people as we — as I like to say — burn and learn,” she said. “So it’ll give us time to amp up and give everybody some level of comfort before we go to the full board plan.” 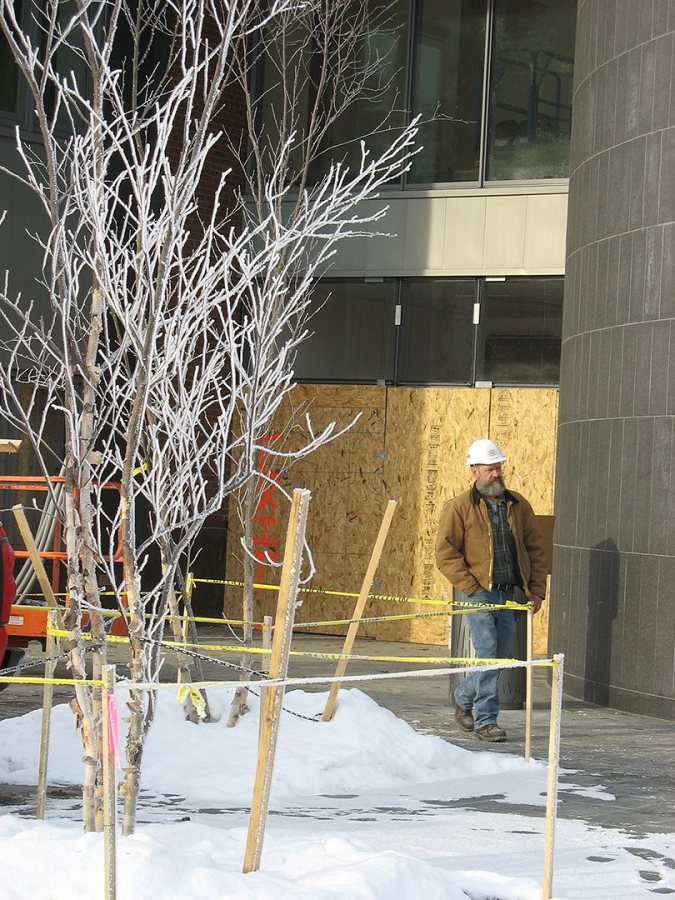 A construction worker passes the east entrance to Commons the morning after a snowfall. (Doug Hubley/Bates College)

Show time is slated for the evening of Sunday, Feb. 24, as students return from break and take their first board plan meal in the new Commons.

How much stuff will Dining Services bring from Memorial Commons to the new one? A lot. Tables and chairs are now being refurbished for use in the new dining hall. Tableware, flatware and serving pieces, all the catering equipment and a lot of office furniture will also go over.

With one major exception, however, the current kitchen equipment has outlived its usefulness to Bates. The equipment is still serviceable, Schwartz noted, just not for the high level of production needed in the new facility. She’s seeking new homes for the old appliances.

The one item in the culinary arsenal that will go to the new facility is the 2-year-old dishwashing machine. To transfer it, Bates will have to remove an interior wall and a window to the outdoors, lower the machine from the second floor of old Commons by crane, haul it to the new building and wall it in at its new location. The move will take about a day, plus disconnecting and reconnecting.

For Schwartz and her staff, the single biggest issue in the transition is training. That’s partly because of new technology. But also, Schwartz noted, coming with the new space is “a whole different approach to what we’re doing.” 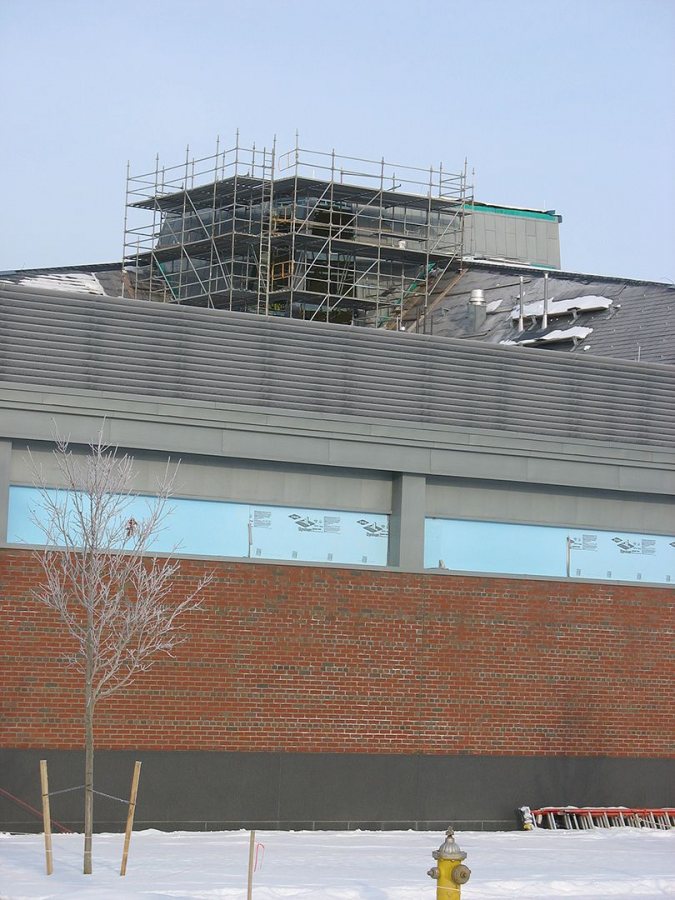 The ventilation monitor atop Commons is surrounded by scaffolding for sheet metal workers and glaziers. (Doug Hubley/Bates College)

In the present Commons, a large proportion of the staff is tasked with serving food that has been prepared behind the scenes. In the new Commons, most cooking will be done to order, in view of the diners. Because of that shift, Schwartz explained, “we’ve had to change the profile of our dining staff, so we have more production people than service people.”

Restructuring the organization has been effected through attrition and retraining during the past 18 months, she said. “I actually sat down with every employee and asked, ‘What is it you want to be doing?’ So they got, for the most part, to pick what they wanted to do, and I’d say 99 times out of 100 it was a good fit.”

For instance, several people on the service side wanted to move into production. “They’re really, really excited about this, because not only do they get to keep the interaction with students, but then they get to do something with food. It’s been a great growth experience for the staff.”

Schwartz emphasized that her staff numbers will not increase, with the payroll remaining steady at 96 benefited employees and 50 or so on-call workers.

In the next edition of Campus Construction Update, Schwartz reveals her favorite new pieces of kitchen gear and explains what the new Commons experience will be like for diners. Watch for it the week of Jan. 7, 2008. 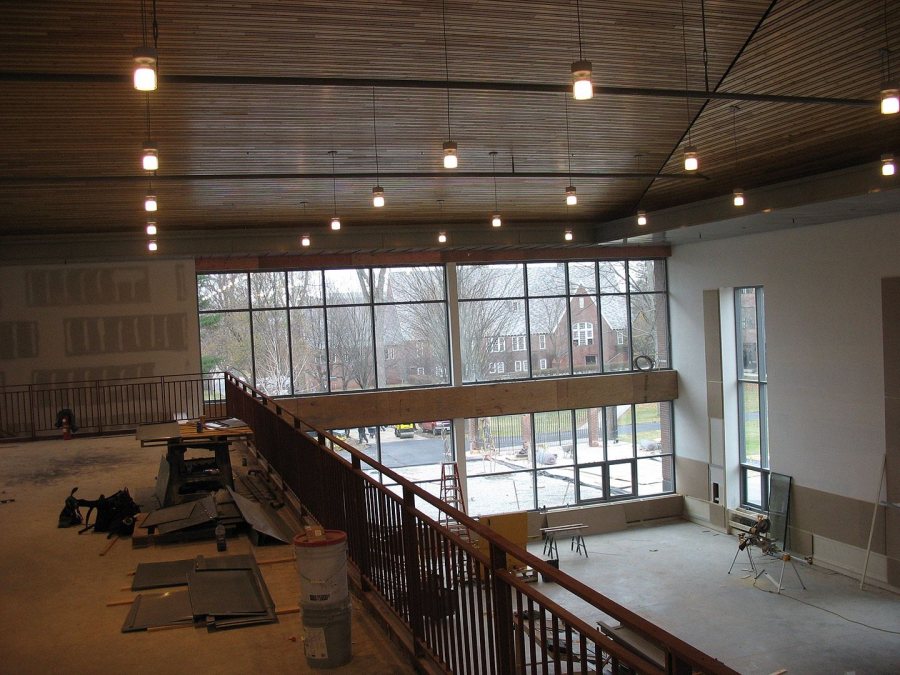 Meanwhile, on the construction front, project manager Paul Farnsworth reported that during the week of Dec. 10 the long-awaited skylight was installed in the ventilation monitor — that big box on the Commons roof. In the coming days, the monitor will be sheathed in purely cosmetic louvers. The scaffolding that’s been up there for months will finally disappear and the last of the roofing slate will be laid.

Inside the building, a couple of steps that we reported on previously are nearly complete. The room where the Commons’ computer equipment will live has been finished, so that gear will soon be installed and the building hooked into the campus computer net.

In the kitchen and servery areas, the ceiling grid has been hung, a procession of inspectors have made their inspections, and the ceiling tiles are about to go in. In that same part of the facility, Farnsworth added, “our first batch of countertops showed up on Dec. 8,” with another shipment due by the 14th. 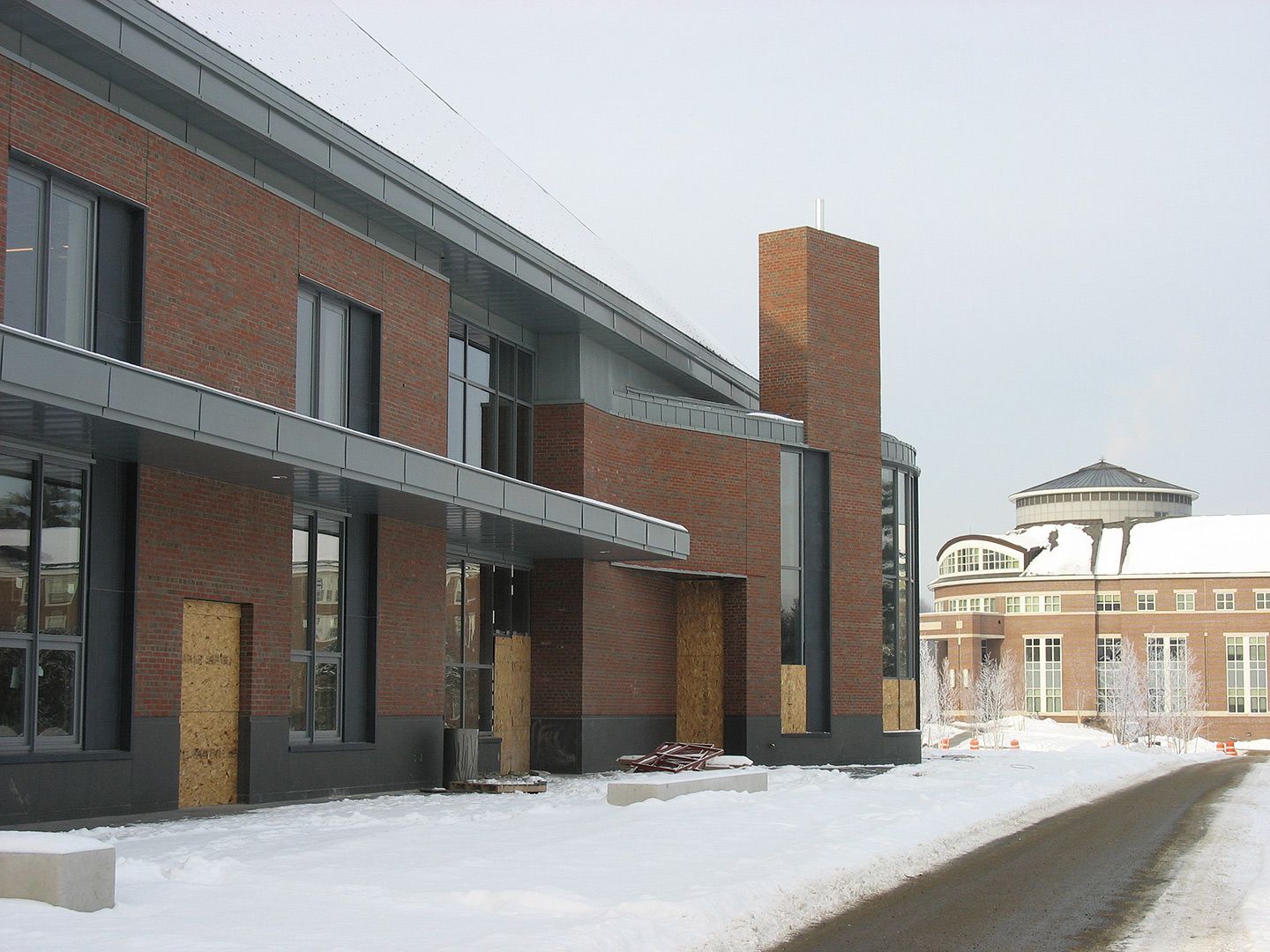 With Pettengill Hall in the distance, Commons is still missing doors and some glass in December 2007. (Doug Hubley/Bates College)

In the dining area, the ceiling made of recycled wood slats has been punch-listed — that is, inspected for defects — the overhead lights are all in place, and gray zinc trim is being installed around the windows.

Speaking of zinc, we asked about the green membrane underlying the zinc that’s being applied around the west entrance. Because wood and zinc expand and contract at different rates, that isolating barrier keeps them from damaging each other when the temperature changes, Farnsworth explained.

And when will the ugly plywood doors go away and the proper exterior doors be hung? Pretty soon, Farnsworth said. “We’re holding off with those doors because that’s the way we’re taking out the larger lifts” — the scissor lifts that allow workers to reach high ceilings and walls.

General contractor Consigli Construction “has put out an edict for the next couple of weeks — ‘You’ve got to get your work done, because we’re going to be closing up the front door and the lifts have to go.’ ” 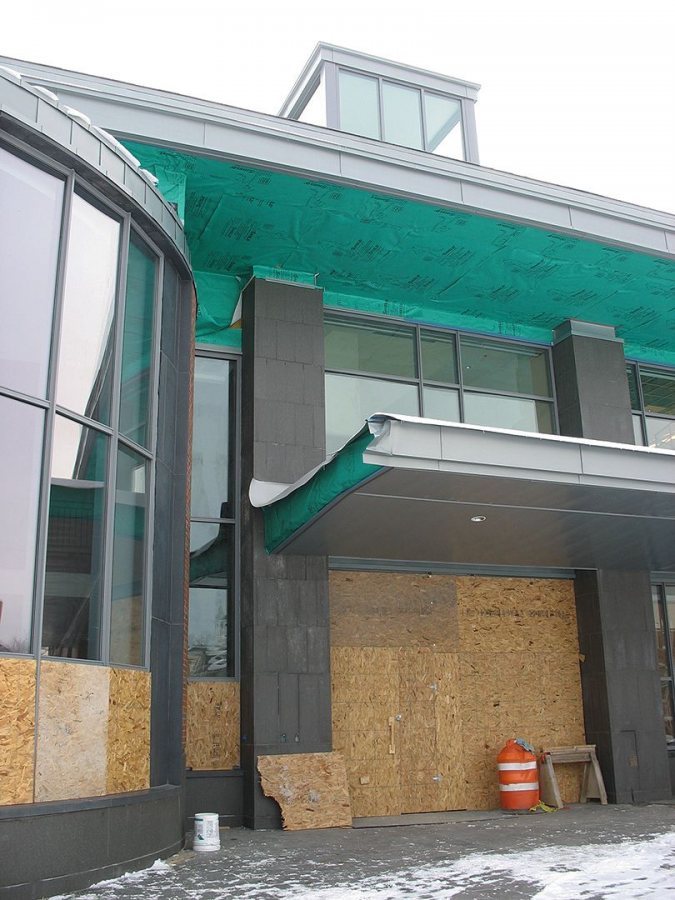 Shown on Dec. 11, 2007, the west entrance of Commons still lacks some glass and trim, as well as its doors. (Doug Hubley/Bates College)

“These are intended to hold the snow pack and prevent it from sliding off as one large block of snow, as happens on Underhill and Merrill.”

Kofos also asked if the fireplace lounge will have a piano, as is indicated by an artist’s rendering of the space. No piano has been selected yet for the lounge, Farnsworth replied.

An image in the previous update, which depicted the three major Alumni Walk pathways that approach the Commons, evoked a question from other readers: Why does the middle pathway stop short? Answer: The grassy expanse between that path and the building will accommodate the large tents that Bates erects for special occasions.

Alumni Walk: Finally, is the Outing Club camping out under two blue plastic tarps on Alumni Walk? Nope. Those tarps are protecting the concrete bases for two granite installations, of which one will display the college’s name and the other will honor generations of Bates alums. The concrete needs to be kept warm while it cures.

Farnsworth explained that a search is continuing for the appropriate granite for the installations, and they will be completed as soon as that stone is found.

Can we talk? What do you think about the campus improvements process?What would you like to know about it? What do you know that we don’t? We want to hear from you. Please e-mail your questions and comments to Doug Hubley, with “Construction Update” in the subject line. 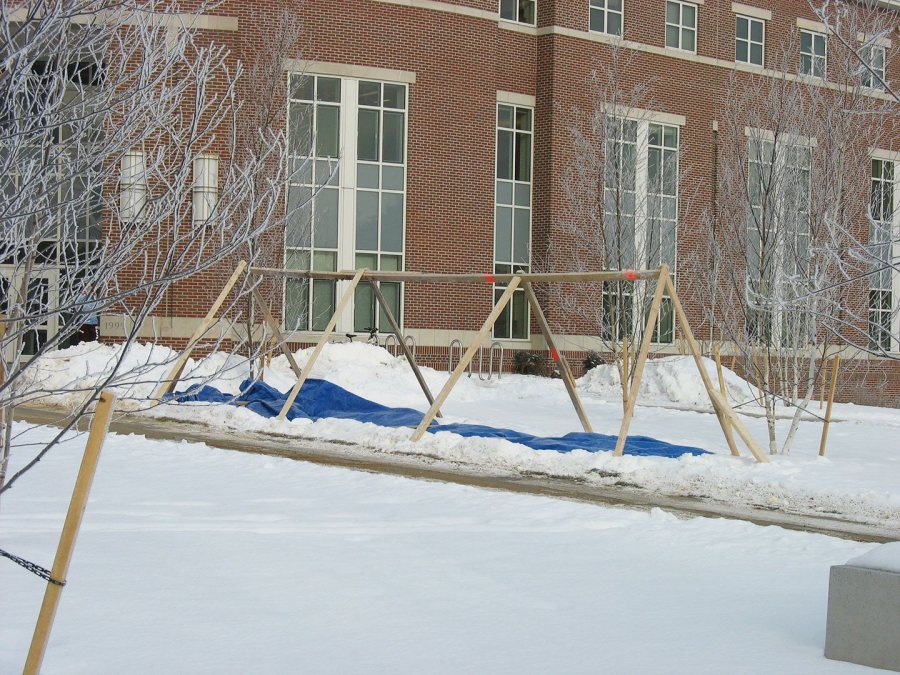 The frame will support a tent that will retain warm air to help the concrete base for a granite installation to cure. (Doug Hubley/Bates College)