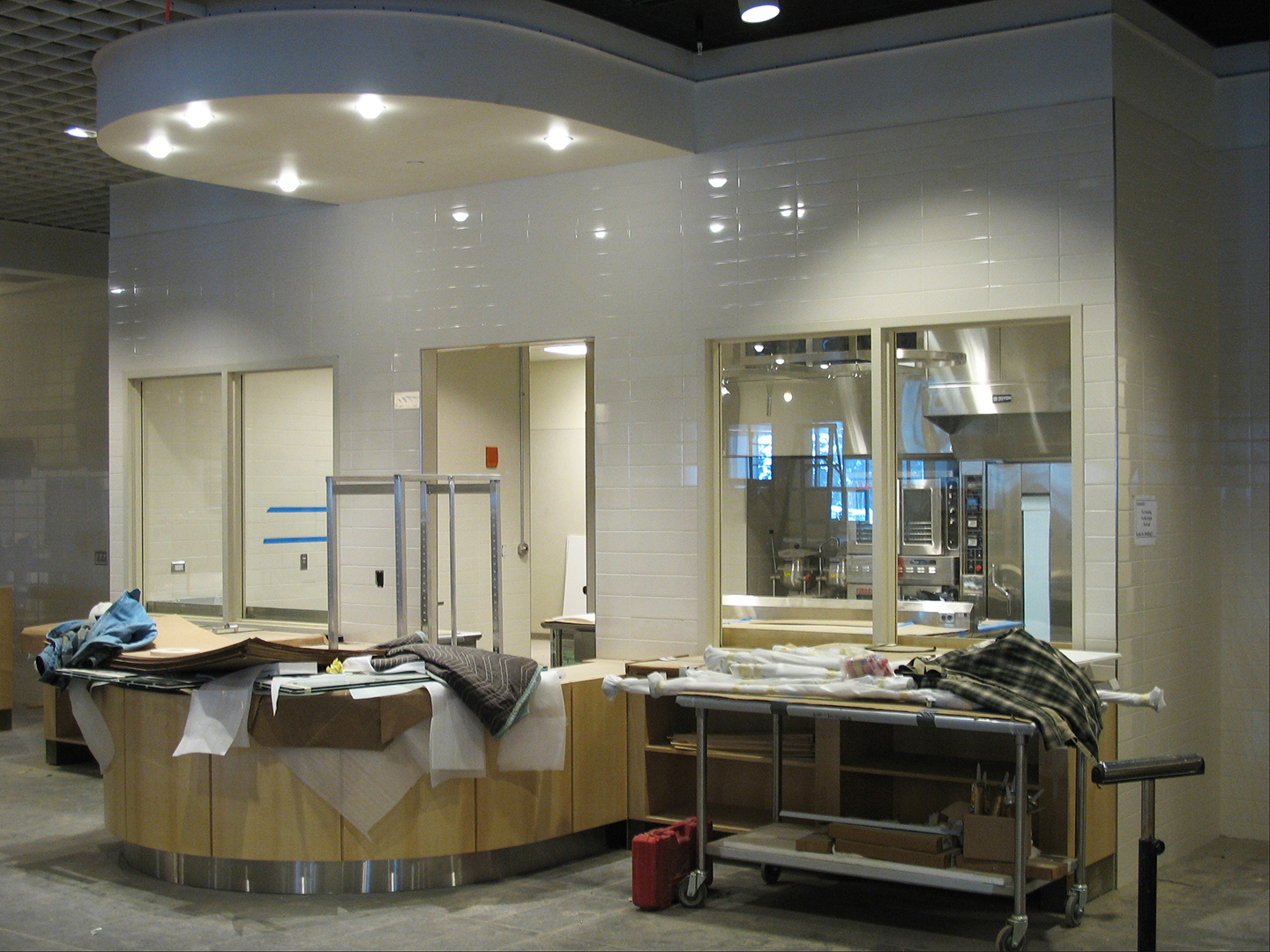 A student serving on a food advisory committee once told Christine Schwartz, Dining Services’ director, that anticipating a meal at the current Memorial Commons is like getting psyched up for battle.

“You pretty much have to fight your way through Commons now” because of the way the space is arranged, Schwartz said. New arrivals at mealtime, still burdened with coats and backpacks, immediately find themselves in a confusion of food stations and fellow diners pressing in all directions.

All that will change when the new Commons opens in February. 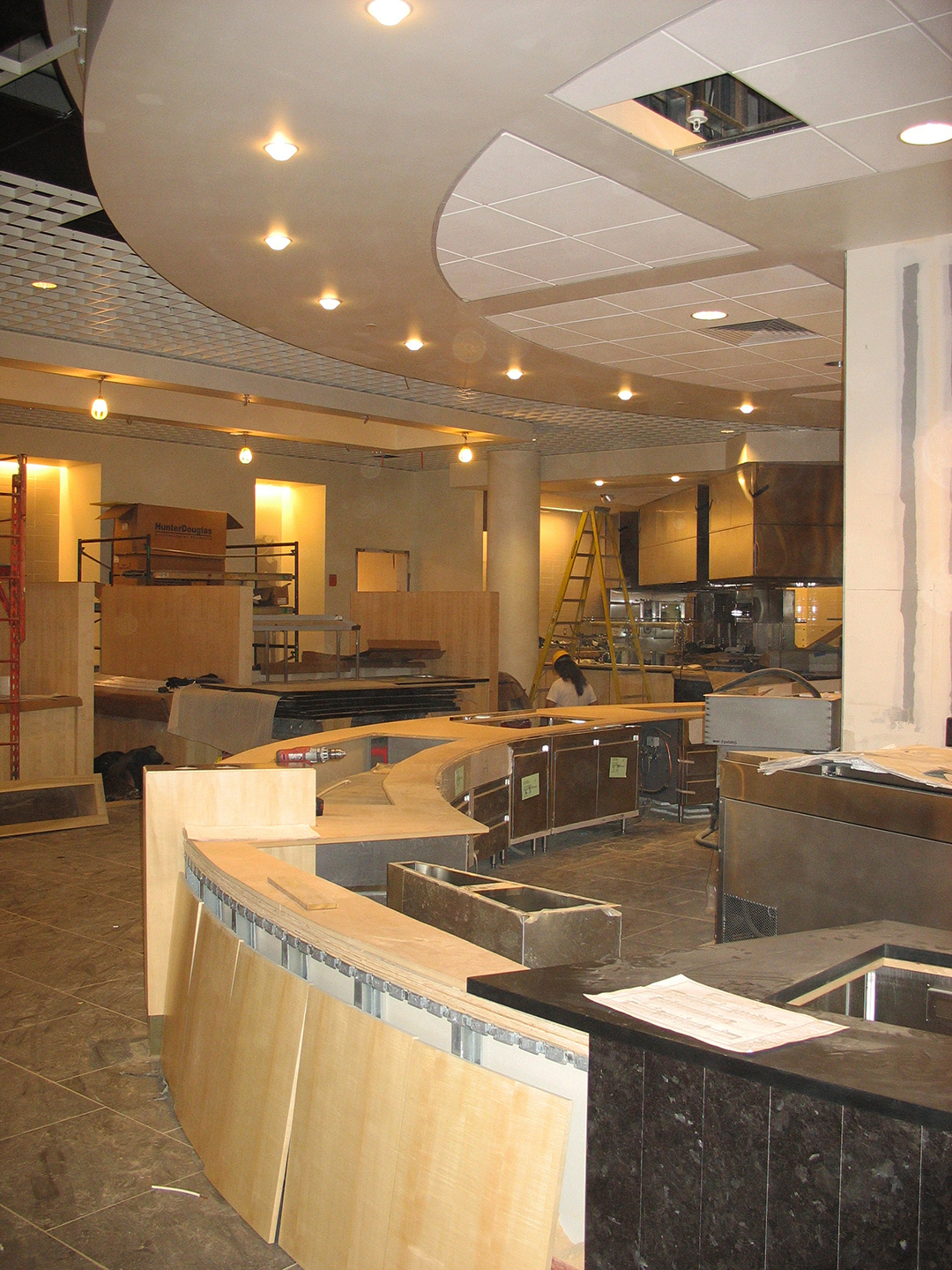 A counter around the brick oven. (Doug Hubley/Bates College)

In the present dining hall, “you come in and you’re forced to make a food choice,” Schwartz said. The new facility will turn that around: “You’ll come in and choose your seat, and then have time to reflect upon what you actually want to eat.”

Schwartz added that “instead of just a few points at which people can make food choices, there will be 15” — the various stations in the area called the servery, such as the “Euro-kitchen” with its array of comfort foods, a grill for burgers and other sizzling treats, the pizza lover’s brick oven and a vegan-vegetarian stand.

In addition to easing the congestion, spreading the choices around this way will engender more depth and imagination in the menu. Nowadays, Schwartz said, “it’s hard to realize exactly all we have to offer because it’s all sort of meshed together.”

But as diners become more conscious of Dining Services’ creative reach, they’ll want more variety. “In the long run, it will mean a lot of improvement in the food on offer,” Schwartz said. “It’s certainly going to change the way students perceive Commons.” 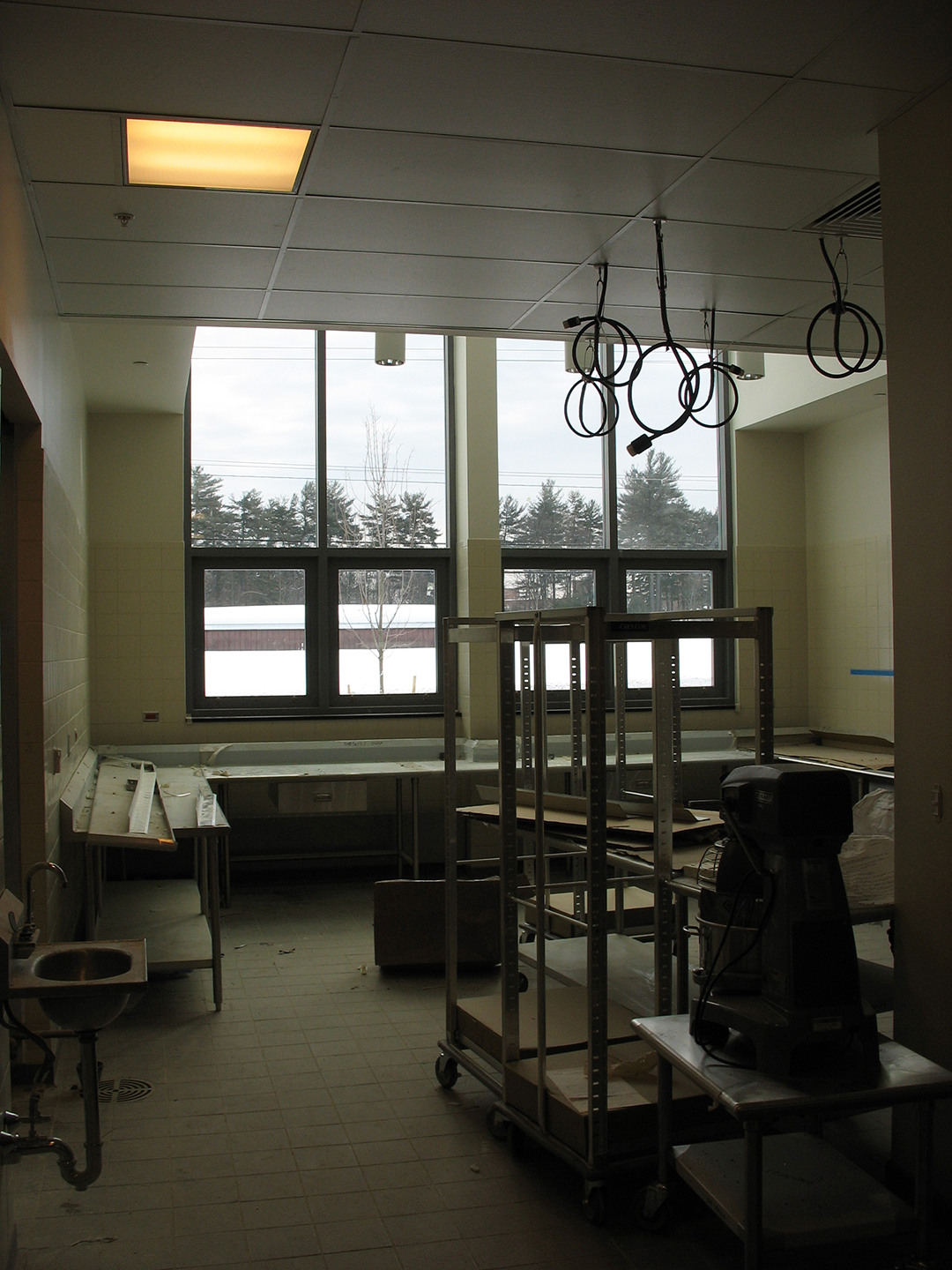 In another strategic advance over the current setup, “most of the food will be finished out front,” in full view of the diners, she explained. “You want as much interaction between the customer and the cook as possible. It allows us to make a product that’s fresher and more to order. The customers get better food and we’ll have less waste.”

The highly energetic Schwartz and her staff have been involved in the design of the new facility every step of the way. “I know where every drain, every outlet, every table and every piece of equipment is going,” the director said.

In fact, her counterparts at other schools have been surprised by, even a bit jealous of, the amount of input Dining Services has enjoyed.

“Functionally, we got everything we wanted,” Schwartz said. She is particularly jazzed by the kitchen’s battery of “blast chillers,” which can cool or freeze food rapidly enough to avoid the damage caused by conventional refrigeration. That will enable Dining Services to purchase produce locally in season, when it costs the least but there are few people around to eat it, and serve it during the academic year without sacrificing much quality. 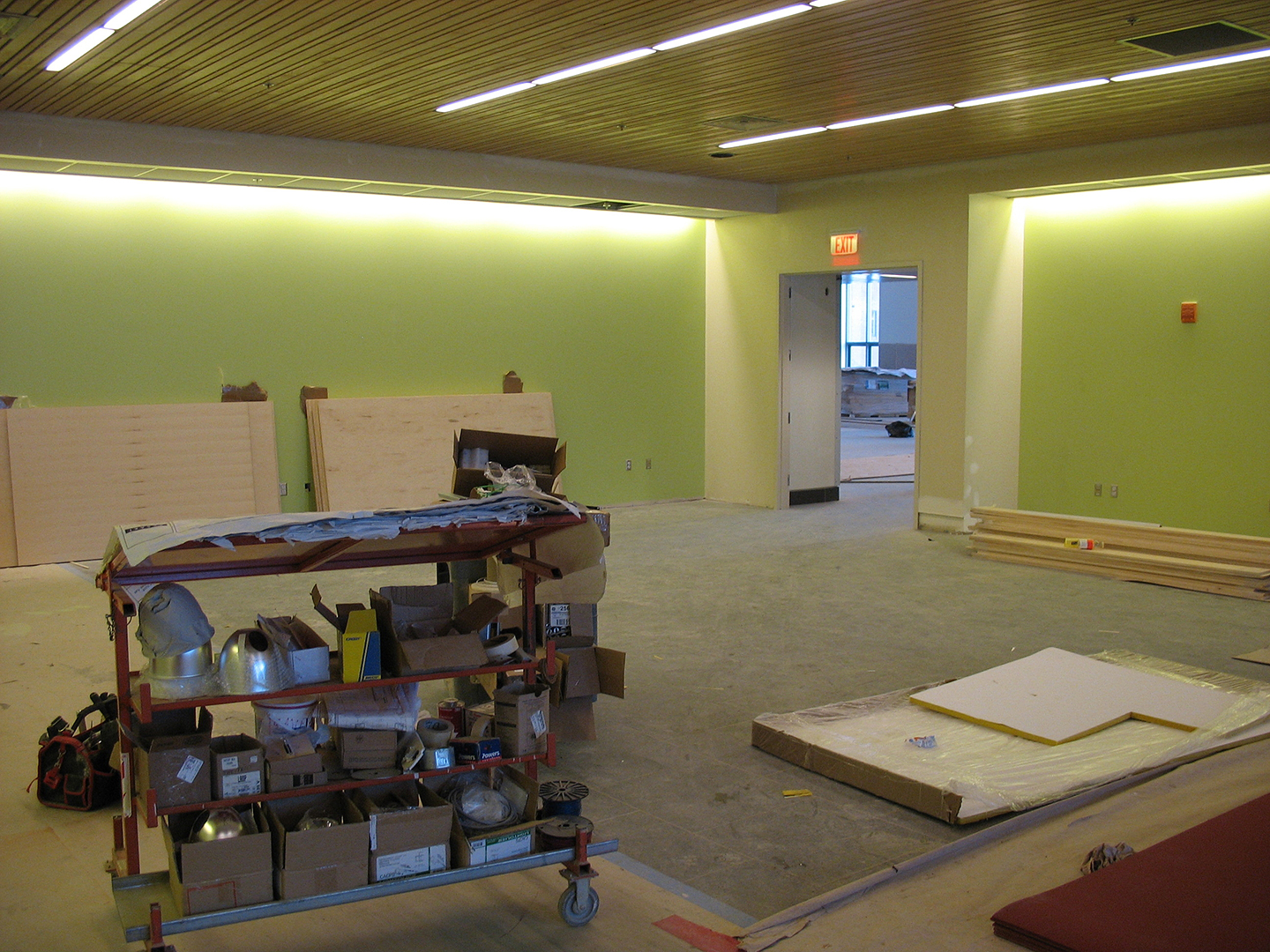 So when you’re fixing your cereal during the long cold winter of 2008–09, watch for tempting displays of good Maine strawberries and blueberries to put over it.

Another new feature is the Euro-kitchen, aka Euro Grill. The latter is a bit of a misnomer: While the concept of a sequenced suite of cooking appliances comes from Europe, a grill is just a part of the orchestra. Schwartz described the Euro Grill offerings as “comfort foods — your mashed potatoes, turkey, roast beef. All those things that make us feel warm and fuzzy on a cold day.”

A brick oven, in a spectacular large island that is the first station you’ll encounter entering the servery, is another bragging point. But Schwartz hastened to explain that while this massive installation made by Wood Stone will be used for pizza, that’s just one slice of its capabilities. 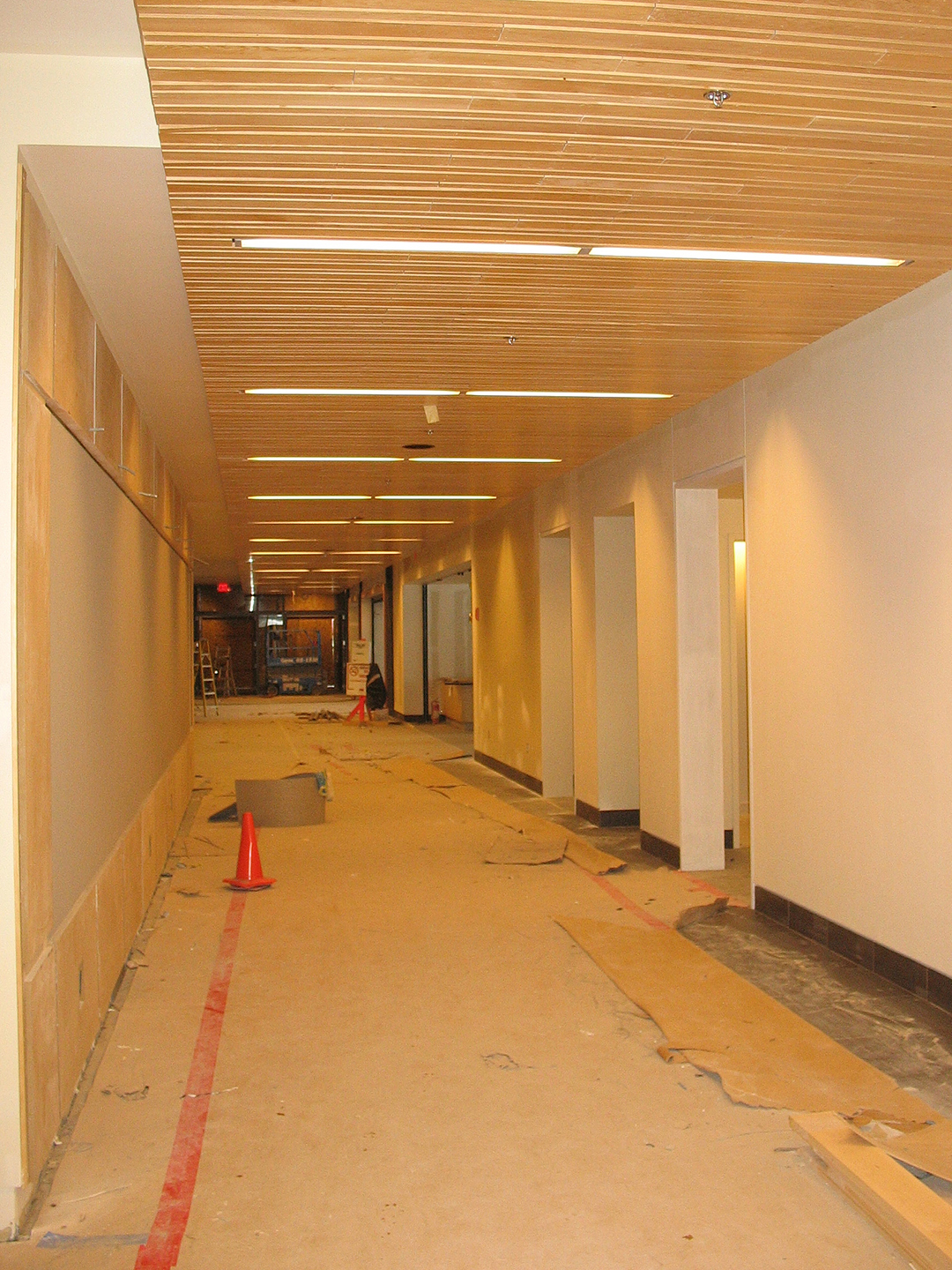 Though cooks from time immemorial have been working with the residual heat that lingers in a stone fireplace, Dining Services has never been equipped to do it. Now, after a day of firing pizzas, Schwartz’s chefs can shut off the gas, put roasts into the oven and slow-cook them overnight.

Schwartz herself could do it, in fact, since she went to the factory in Washington state to train on the Wood Stone. The unit “is really expensive,” she said, “and I wanted to make sure it was the right thing for Bates.”

Finally, with Memorial Commons just weeks away from becoming a memory itself, we asked Schwartz to clarify what will become of the Bobcat Den, whose friendly staff and intimate atmosphere have made it a cult favorite.

The hours will be reduced, she said, but the Den won’t be shut down anytime soon. Instead, a new gathering place designed to provide a Dennish kind of café feel will likely be included when the “Main Street” phase of the campus master plan is built out, some years down the road.

So what’s up on the construction front? On Jan. 4 project manager Paul Farnsworth took Campus Construction Update through the new Commons, including a couple of newly christened spaces. 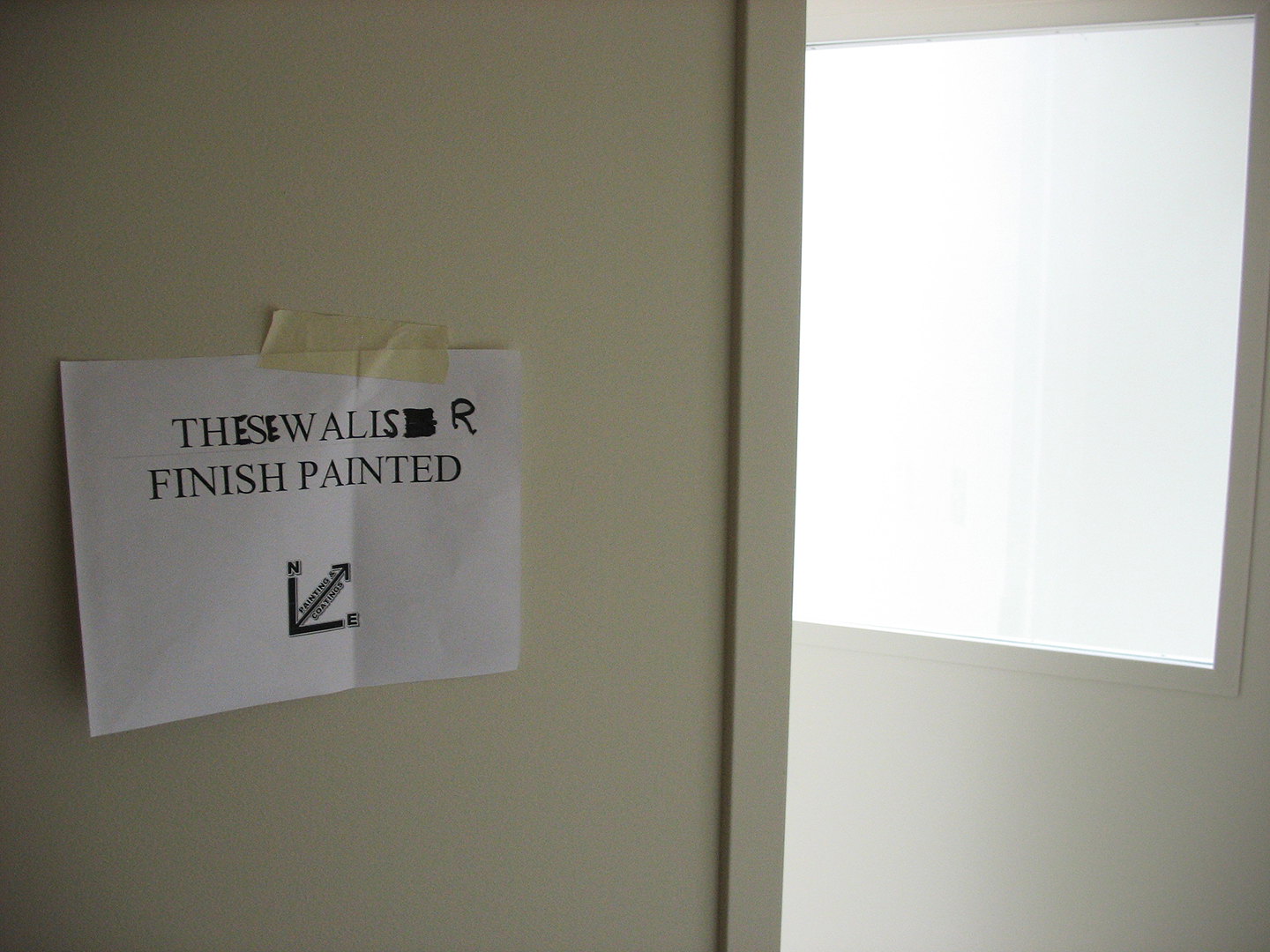 A sign of the times in the New Commons construction. (Doug Hubley/Bates College)

Once known simply as the Arcade, the main east-west corridor on the first floor is now called the MacNaughton Arcade. The space was made possible by a gift in honor of his family from Trustee David MacNaughton ’73.

Across the MacNaughton Arcade from Milt’s is a space that may rival the Den as a place to gather after dark. The so-called arcade dining area, painted a vivid green, will sport not just tables but booths upholstered by acclaimed Portland designer Angela Adams. 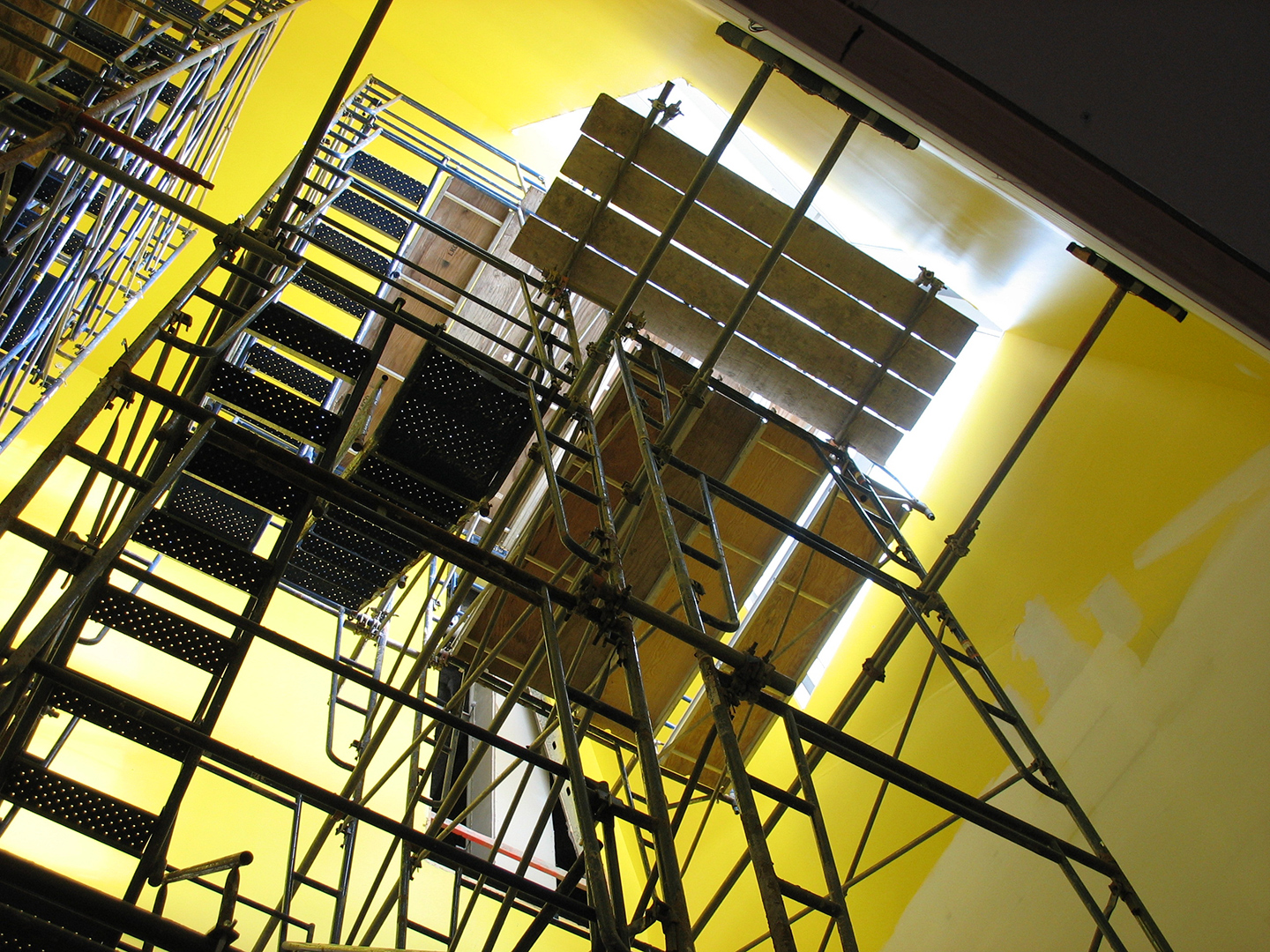 Staging for the painters working beneath a skylight. (Doug Hubley/Bates College)

By day, a retractable glass wall will close the space off from the arcade, and it will serve as Commons seating. After dining-hall hours, though, the wall will be retracted and night owls will be able to bring their sandwiches or prepacked meals from Milt’s to a cozy booth.

The Commons’ exterior is largely complete, giving passers-by an impression of inactivity that’s quite misleading. Inside, the race is on to get the facility ready to receive Dining Services staff by the end of January. Painting, carpeting and other surface work is going hot and heavy throughout this sprawling space. But the focus of activity is on the servery.

Here, with most of the fixed equipment in place and the room surfaces done, workers are concentrating on millwork — e.g. countertops, cabinetry and knee walls — and installing fittings such as sneeze shields and utensil holders. 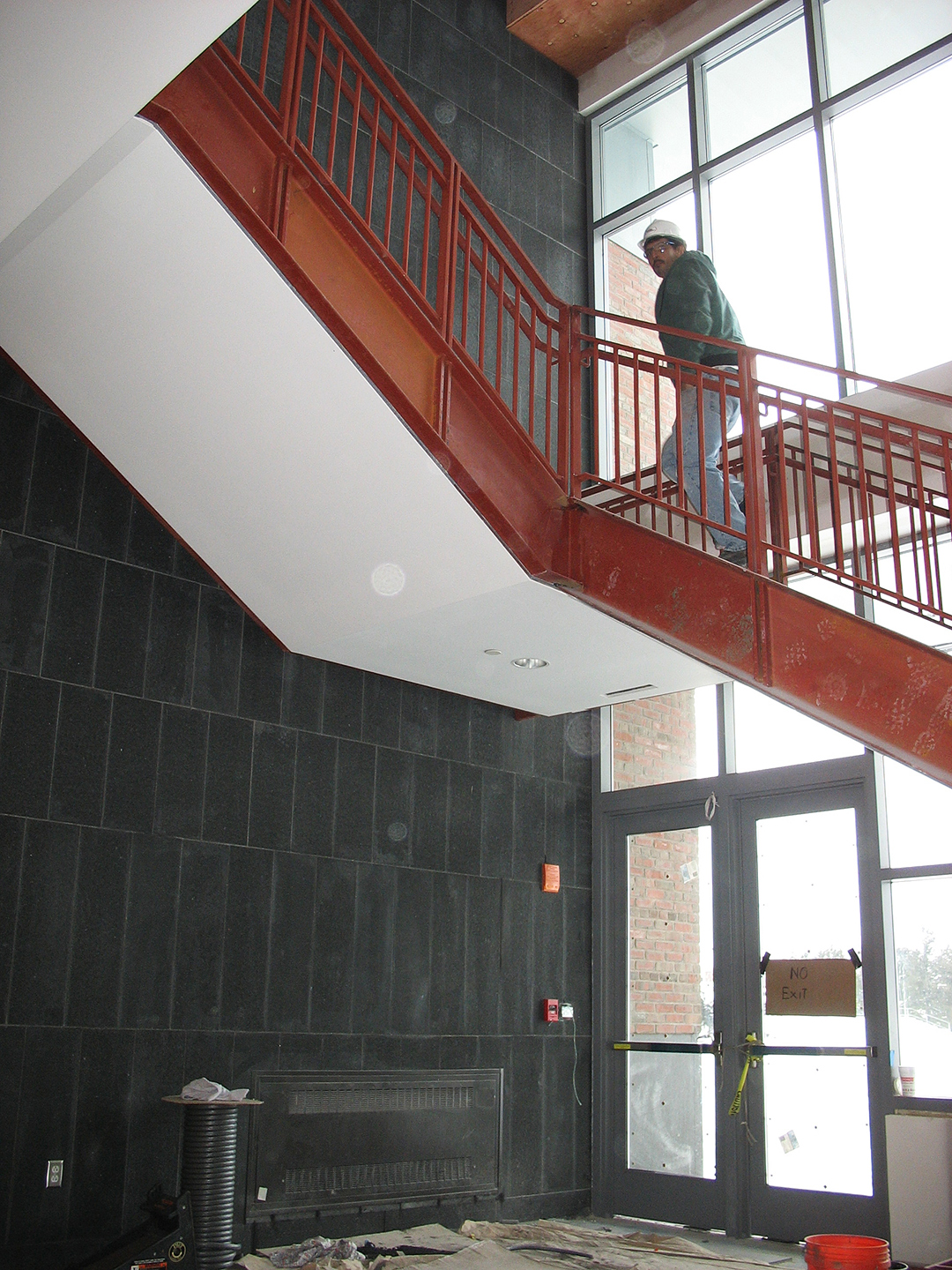 The main stairway with its granite walls. (Doug Hubley/Bates College)

As mentioned previously, the circular station housing the brick oven is the star of this show. One finishing touch will be a neon accent light around the top of the station — no words, just a glowing line. As Farnsworth explained, “we had strong feedback from the students. They didn’t want it to look like a food court.”

Also striking is the bakery. Located at the rear of the servery, it suggests a storefront, with its gleaming tile façade, mock marquee over the doorway and four big windows that afford views into the work area.

Meanwhile, in the dining hall and its mezzanine, the finish work still outstanding includes sheets of maple veneer that will cover baseboards and accent the giant windows. Where the theme for the building’s exterior is charcoal-gray granite and brick, on the inside pale woods complement the dark stone. Along with the maple, Forest Stewardship Council-certified Western hemlock is being used on certain ceilings.

The kitchens, in an area behind the servery that also includes offices, freezers and various storage and service rooms, are all but finished. In a marked contrast with the cramped, dark workspaces in the current Commons, the new kitchens are spacious and well-lit by east-facing windows. 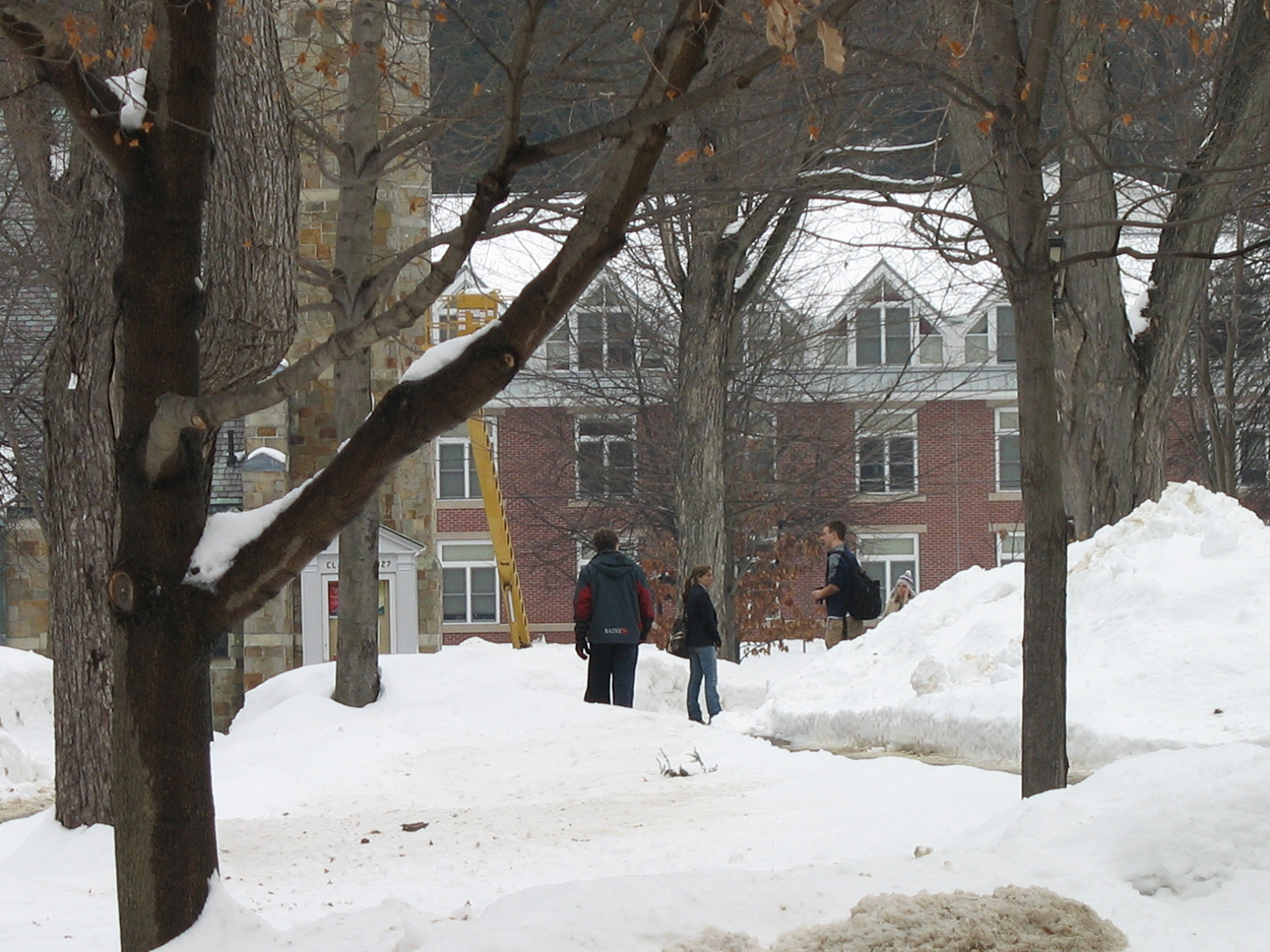 With the new housing at 280 College St. in the background, students meet on the historic Quad. (Doug Hubley/Bates College)

Also in this mazelike area behind the scenes is a room full of miscellany awaiting deployment. Included are eight pallets of food-service gear that Schwartz bought when she saw it at, of all places, the local Marden’s discount department store. The prices were irresistible, Farnsworth said — so much so that former Dining Services director Bob Volpi, now at Williams, came north to take advantage of the sale.

This room also reminded us that large or small, moving is moving. As with every shift of household you have ever seen, there was, along one wall and stacked to the ceiling, a pile of banana boxes packed full and closed with their handy covers.

Can we talk? What do you think about the campus improvements process?What would you like to know about it? What do you know that we don’t? We want to hear from you. Please e-mail your questions and comments to Doug Hubley, with “Construction Update” in the subject line.